What makes a community? When does a neighborhood go from a group of people living in close proximity to one another to a place of belonging interconnected through the act of daily living? The sense of kinship, the belief of mattering, active participation, and a shared history are all elements that contribute to the facilitating of a healthy and sustainable community. Life in a small town, community seems like a de facto way of life. As we grow up, schools are their own microcosms of communal living. Could there possibly be a recipe to building strong and fulfilling communities? This in essence is the root of community, and while there may not be an overly simplistic answer to this question, one Southern California retail developer may be able to provide some answers. 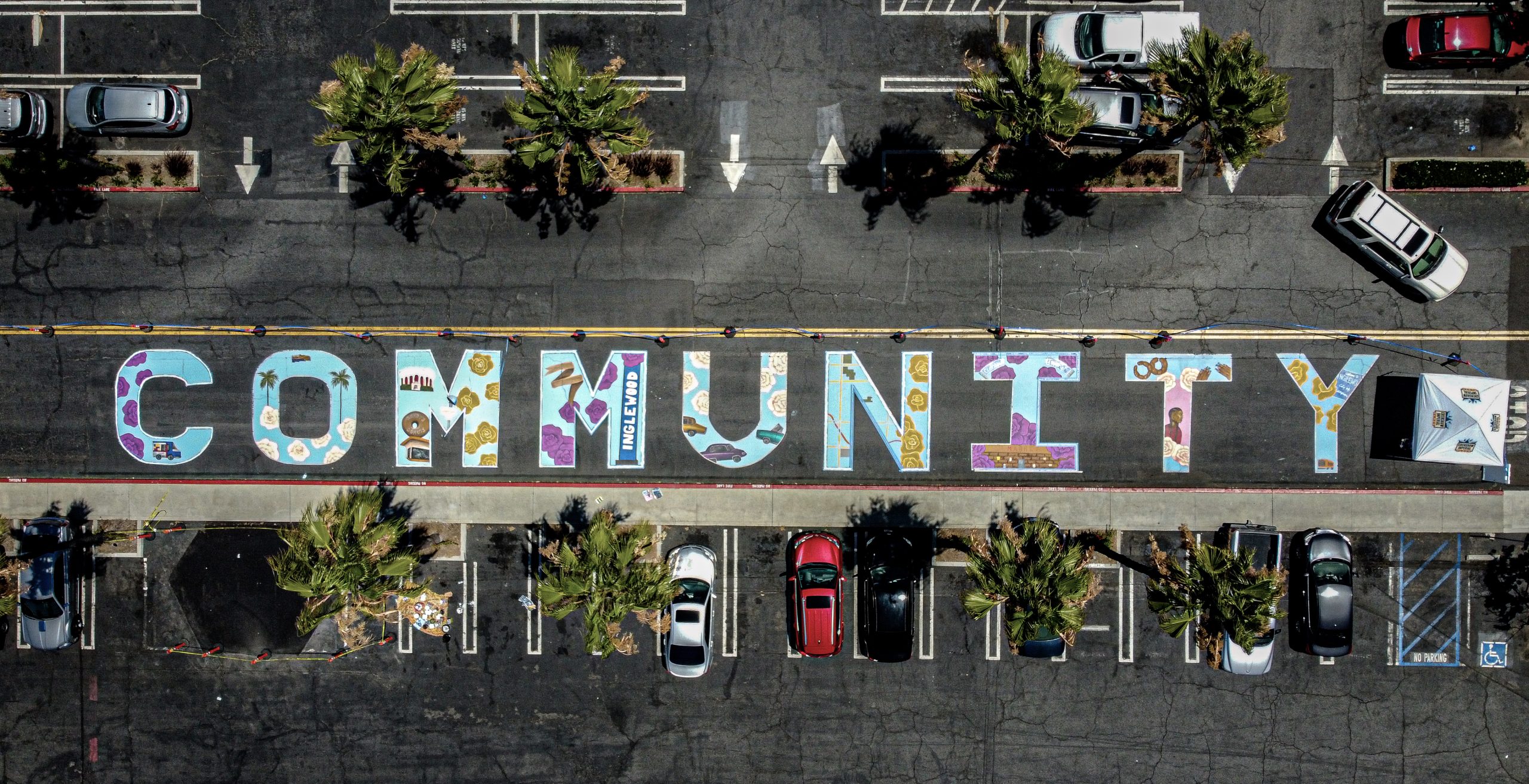 For the last 3 years NewMark Merrill has been changing the role and cultural perception of the American shopping center. Recently, they have been using shopping centers as means of building and fostering community. Turning them from places of mass capitalistic commerce to a source of pride and creative community engagement. Their secret? Street art.

“When the pandemic hit, it was a time that we needed to come together as neighbors, a community, and a nation to support and uplift one another – art and murals was the way I got to do that.”

At the heart of NewMark Merrill’s mission is the belief that a shopping center can be more than a landmark of commerce. They believe it can be a place of creating relationships, enhancing neighborhoods, and inspiring others. Senior Marketing Director Edie Trott has been very hands-on since NewMark Merrill commissioned its first mural. “Part of NewMark Merrill Companies’ mission is to become a part and enhance the communities in which our shopping centers exist. This is done in so many different ways, whether it is bringing in area appropriate tenants, supporting local charities and nonprofits, free educational and cultural events, and we thought that bringing murals and art to the properties not only fit within the mission but enhanced it.” 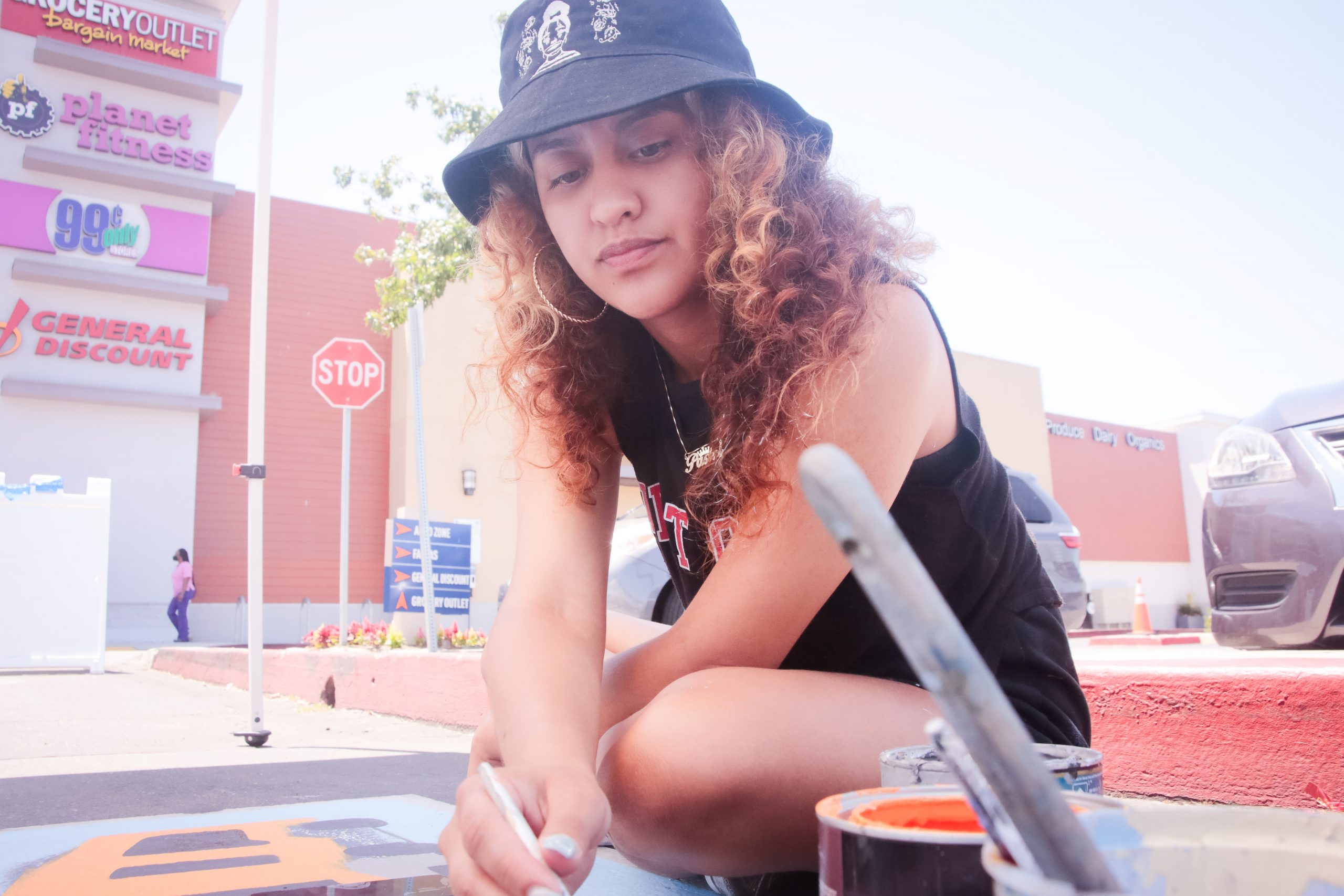 The NewMark Merrill company commissioned its first mural in the city of Norwalk and it was the first mural to ever be sanctioned within the city. “The response was incredible. We began looking at other walls at other properties and really formed the program. Specifically, that we wanted to have local artists painting the murals and that we wanted to bring art to a community,” Trott explained. “When the pandemic hit, it was a time that we needed to come together as neighbors, a community, and a nation to support and uplift one another – art and murals was the way I got to do that.” The most recent mural created under this project was the repainting of the COMMUNITY letters at the Crenshaw Imperial Plaza in Inglewood. The piece is painted directly on the asphalt at the entrance of the shopping center. This time the project is being painted by PASTEL, who is no stranger to the Inglewood community.

“Inglewood really reminds me of a time in my life where I was kind of trying to figure it all out,” PASTEL told me as she put the finishing touches on the mural. “I had just graduated high school, I was enrolled in college, but I knew the path I’m going towards that’s not really what I want to do,” PASTEL said. Like many artists, doubt and unstable pressures of homelife can create detours from the elusive endeavor of art. Inglewood is the place where PASTEL got to figure herself out through all the ups and downs. ”I remember a few times where I had to walk the streets, phone dead, heartbroken, tough times. Just growing up, going through it, figuring it out.” 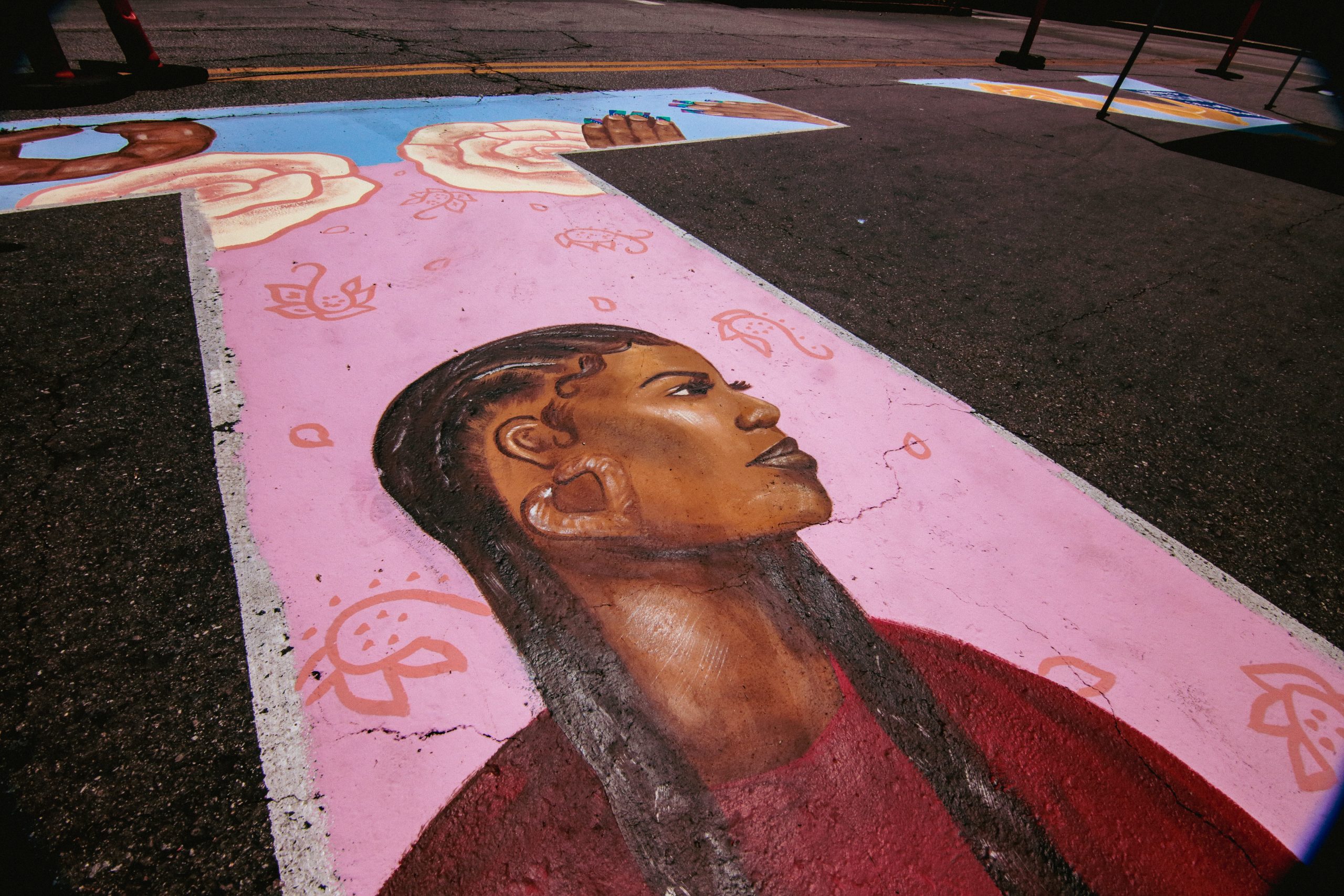 After highschool PASTEL moved in with her best friend in Inglewood to escape her chaotic home life. Inglewood was more than a place for PASTEL, it was an opportunity where she choose herself. It’s a place of growth she remembers fondly. The streets are filled with memories for her here; it’s even the place where she got her first tattoo. Returning to paint in Inglewood has given her a space to reflect. “I think it’s really something great that I got the opportunity to paint here. That I went through everything and I’m painting now. That’s what I do, and I get to do it here in Inglewood,” she said. “I’m a different person now and I feel that’s beautiful.”

“I think it’s really something great that I got the opportunity to paint here. That I went through everything and I’m painting now. That’s what I do, and I get to do it here in Inglewood,” she said. “I’m a different person now and I feel that’s beautiful.”

There’s a saying in Spanish, ‘Ni de aquí, ni de allá’. It means from neither here or there. It’s a saying PASTEL knows well as a first generation American. Her parents originally immigrated from Mexico and decided to stay in the U.S. after she was born. As an artist she’s completely self taught. She started painting seriously around 2016. “When I was in high school, I would just draw, it was mostly just drawing. Pencil, paper. But then, when I graduated high school, I didn’t really want to go to school. I wanted to draw. I kind of figured that painting will take me farther. There are even more opportunities than just drawing. So then I started and I taught myself to paint.” She originally began painting on canvas, shoes, and other objects but eventually moved into murals because of her desire to progress, challenge herself, and go bigger. 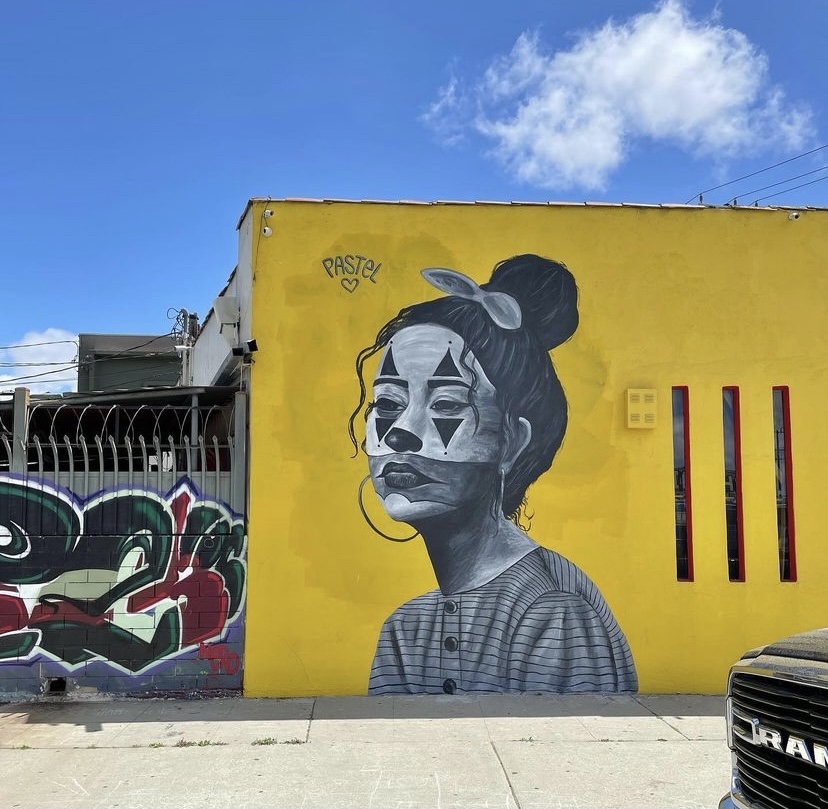 Self portrait of PASTEL as a clown. A motif that continues through her work. Downtown Los Angeles.

She took her portfolio around and approached businesses in the area asking if she could paint their walls. They all said no. Eventually, frustrated with rejection and the need to ask for permission she decided to just set up shop on the street. She took her paint and brushes and began painting vacant walls. “I haven’t really had any trouble with that,” she said. Everything PASTEL creates is hand painted with a brush not a spray can. “When I do murals, I do paint. So I feel I don’t really look like a vandal.” PASTEL has been able to build off these works and carve out a career of new opportunities for herself. It’s something of an anomaly for a woman in the world of street art, which is so often proliferated by male artists. In fact, her male assistant on this project told me he had been stopped multiple times during the process and been complimented on his work. With a charming mix of humor and humility, he’s had to inform them PASTEL is the actual artist of this piece.

As PASTEL continues to work in murals she’s seen how they can impact the area around it. “Murals are kind of different. It’s more like not one person owns it. It’s more like the neighborhood’s or community. Everyone gets to enjoy it, and everyone gets to see,” she said. “Working here, I’ve met a lot of people that appreciate it. I talk to them and hear their story and how they relate to it.” 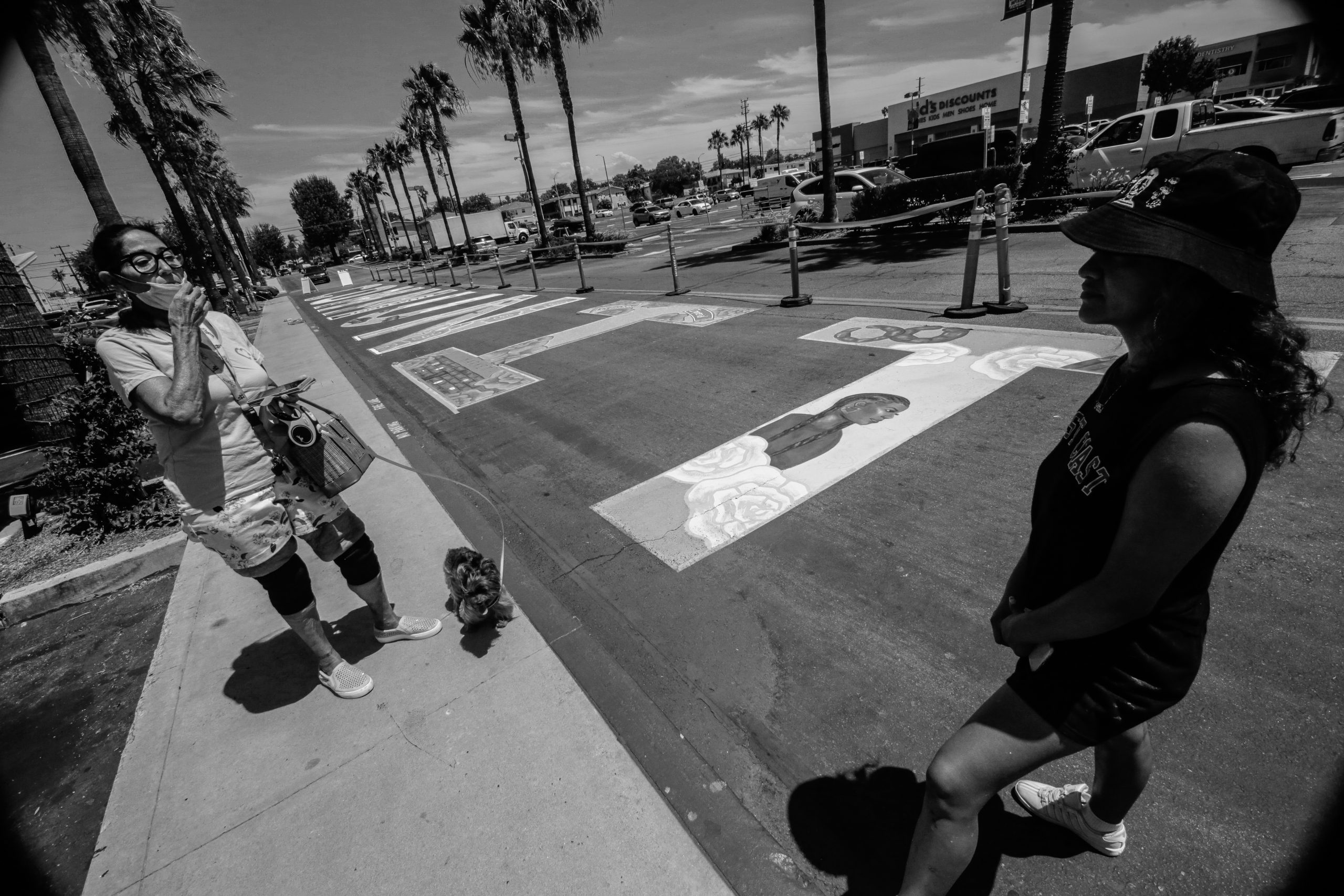 A woman and her dog stop to talk to Pastel about her work.

In the act of painting this commission, PASTEL has had the opportunity to engage with the neighborhood. People constantly stop to talk to her about her work. Even as I speak to her people frequently come up to meet the artist. People bring their kids and pets to watch her work. PASTEL’s version of the Inglewood COMMUNITY mural is filled with iconic imagery from the community itself. Each letter pulsates with things intrinsic to the fabric of Inglewood. Places, people, objects, all hinting at the unique combination of elements that make up the area. The letter U is full of vintage collectable cars. Some of the other letters contain local favorite hot spots such as Randy’s Donuts and the Brolly Hut. 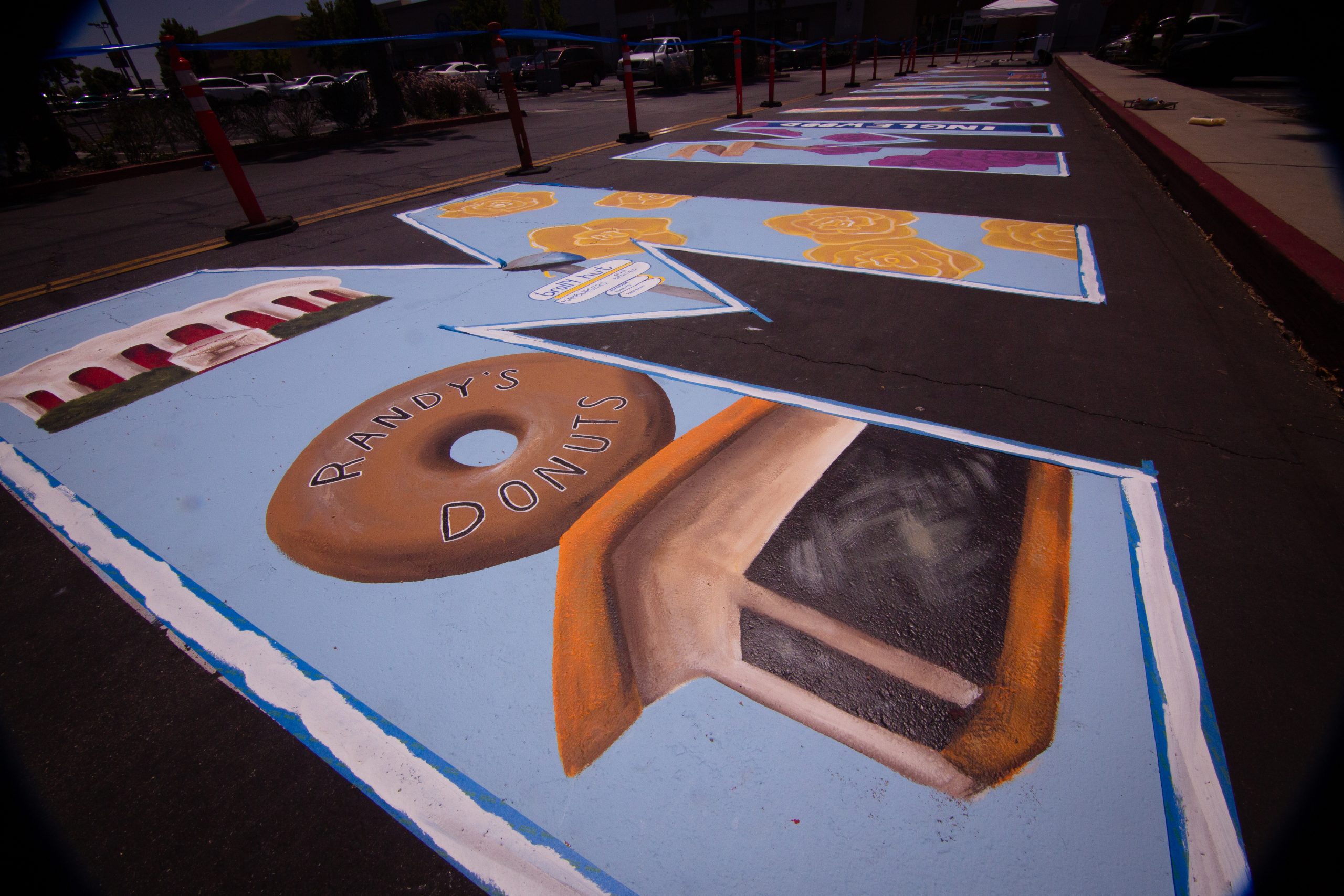 A selection of local landmarks inside one of the individual letters. Featuring Randy’s Donuts, Brolly Hut, and the Forum.

The Inglewood COMMUNITY mural strongly embodies the shared communal concept. Newmark Merrill plans to repaint the mural on a rolling schedule of every 9 months or so. Each time with a different artist. “It’s cool. Everybody gets a chance. Everybody gets a turn.” PASTEL said.

Some of PASTEL’s future aspirations include working with apparel and possibly eventually collaborating with some of her favorite brands like Converse. She also has a deep interest in cultivating the creative development of others. Possibly creating a space that caters creativity to the community at large, “A place where I could also work, but a place where I could also provide for other people. Like, for kids. They could come in and do like little art workshops, or, people could throw art shows there, something like that.” It’s taken some time, hard work, and perseverance, but her family finally has begun to see and appreciate her the fruition of her artistic career. 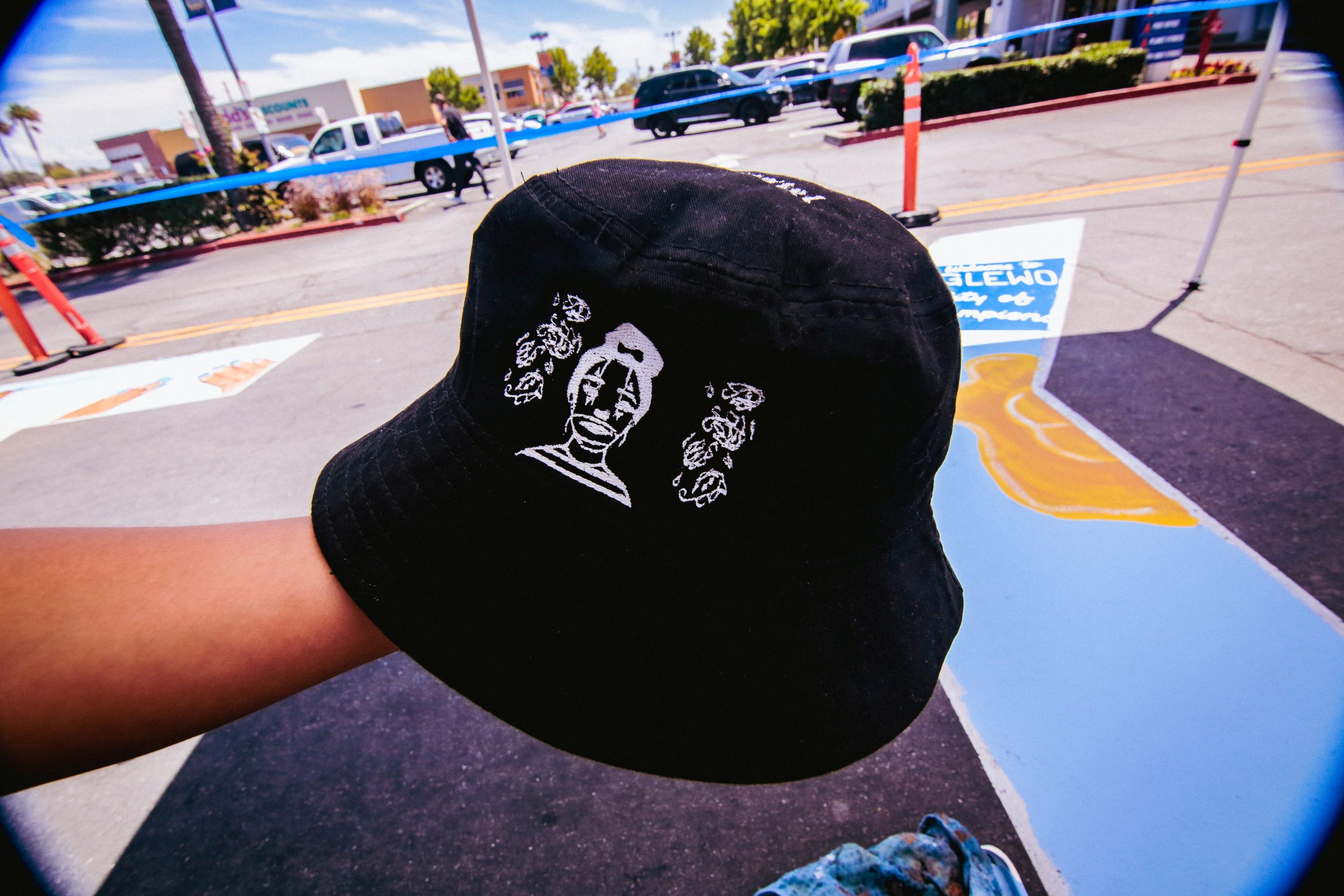 Details of embroidery work on one of PASTEL’s hats.

Trott selected PASTEL to paint the Inglewood mural because of her story, as well as her strong connection to the city and to the people and memories that reside within it. Since the pandemic, NewMark Merrill has commissioned nearly 20 murals, all created by local artists. It’s a unique program that enables local emerging artists to become more established through highly visible and legitimate work. The program also generates pride throughout the community as people are aware the artwork was created by someone from within the city itself. Some people may even know or be familiar with the artist. It’s a contrast from many of the major mural festivals that pander to the largest names in the game and follow the trendiest memes on social media. NewMark Merrill’s approach is an inspired method of incorporating an aspect of the creative force into a community and converting a shopping center into a symbol of empowerment. 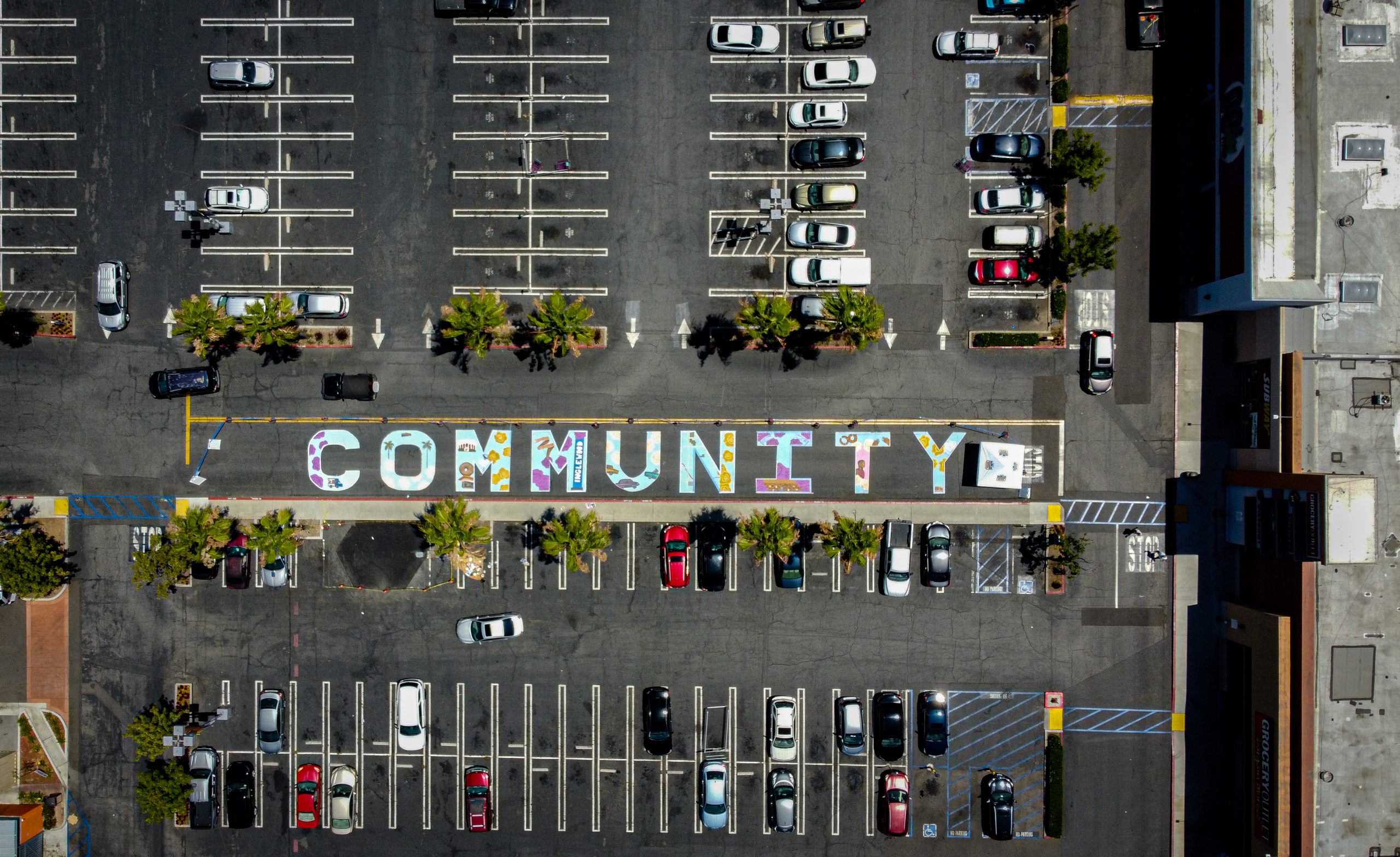 COMMUNITY as commissioned by NewMark Merrill.

To learn more about what Newmark Merrill is bringing to the community visit:
https://www.newmarkmerrill.com/community-art/

Brian Bloss is a Los Angeles based artist, writer, and photographer. He enjoys long walks on the beach and anything wrapped in bacon.