On August 19, 1839 at a meeting of the French Academy of Sciences in Paris, the French public, among them many portrait painters and lithographers, first curiously regarded the new invention of a theater set designer, Louis-Jacques-Mandé Daguerre. After witnessing his inexplicable image capturing machine, they were highly critical of the images his new photograph process produced. Yet, in the 1830’s, the Daguerreotype and the photographic processes that were birthed from it quickly became the most popular form of capturing historic and artistic images of the Victorian world. In a few short decades, the more rapid processes of tintype and celluloid photography allowed Would-be Photographers to produce higher quality images in much less time, allowing photography as a medium to eclipse lithography, painting, etc. by every conceivable measure of cultural significance. Now, much in the same way, there is wide speculation over the future of street art as the public dives deeper into the digital world with the advent of another medium; the non-fungible token, or “NFT”. The technological omnistory of the 21st-century is and always will be the Internet. And as it has matured, so too have people found new and better ways to organize it for security and longevity.

Enter the Blockchain; a virtual ledger that serves a stopgap measure for the speed of transactions and information exchanges for everything from collaborative projects, cryptocurrencies, and yes, even art. But what about the art that occupies physical space? Art culture as we know it is being transmuted by the NFT. Unlike the tokens we place monetary values on (Bitcoin, Ethereum, Dogecoin, etc.), the “non-fungible“ part of an NFT implies uniqueness, as though the NFT itself is an indestructible work of art that lives forever within the blockchain. That’s not entirely true. The item being sold is not the art, or the rights to reproduce the image; more like a print of a painting that already exists. David Gerard, a notable bearish voice on the subject of NFTS and cryptocurrencies said “[NFTs are] like a certificate of authenticity that’s in Comic Sans, and misspelled.”

Take for example one of the first major NFT sales: a token representing Nyan Cat; a cat with the body of a strawberry frosted Pop-tart, emitting 8-bit rainbows from its butt, sold for the price of not one, but two of the latest model of Ferrari. The person who purchased this NFT does not own Nyan Cat, and does not have rights to reproduce the image.

Would a street artist want to make an NFT? Isn’t the premise of their work to intercept our daily routines by unleashing their art in places we can’t ignore? If, for a random example, Vince Ballentine took his iconic “Big” mural from Bedford Avenue and slapped it on a non-fungible token, would it make a similar impact? Probably not; the subject is meant to pay homage to the spirit of  that specific neighborhood in that one part of New York.

To push a duplicate image of a piece of graffiti or a mural onto the blockchain would say less about the dexterity of the art than it does about the wide impact of blockchain technology. This can be said of many of the other artworks trying to capture a local neighborhood zeitgeist. An image already assigned its own well-defined niche in the physical world has a different kind of cultural value than something you can scroll through; it cannot be denied or ignored because it lives in and belongs to  that place.

If these physical medium artists augment their work to say something about 21st century life directed more at the Internet natives and digital nomads, the mashup is more likely to catch the eyes of the crypto-bros and the NFT collectors pouring money into the market. If Ballentine were to superimpose Biggie standing next to a ‘BitCoin’ ATM outside of a weed dispensary on Bedford Ave, it’d probably sell well (go for it Vince). Why? Because it validates the ethos of the buyer more than the prophetic legacy of the music legend the artist was paying tribute to.

This can be said about art in any traditional medium now seeking  a payout from the NFT bubble. If one thing can be said of every major sale so far, it follows a rather predictable formula: either work or the artist is already a known entity in the art world, a cultural celebrity breaking into the space, or the work itself is an image or clip, dripping with Internet-age iconography that captures (or at least attempts to capture) the absurdity of our addiction to internet culture. Consensus creates the value of art in the NFT world, as it has for generations in the art world broadly.

Out on the streets, this cultural fluctuation leaves graf writers and mural artists to grapple with what it all means for the value of tangible artwork. Adrian Wilson, the street artist known as Plannedalism, recently minted his first NFT, a collage of several images of his “piss taking” spray-painted stencil, “POST NO NFTS”. “At the time, the gas fees were about $60 to mint and $70 to transfer the thing to the buyer on rarible” says Adrian. Gas fees are payments made by users to compensate for the computing energy required to process and validate transactions on the Ethereum blockchain. Every time a transaction is made on the blockchain, servers around the world compete to complete the same transaction, and the first one to finish “wins”, securing the exchange without housing it in a centralized databank. The price paid by end consumers is inflated by this method of exchange, and is even more costly to our planet. 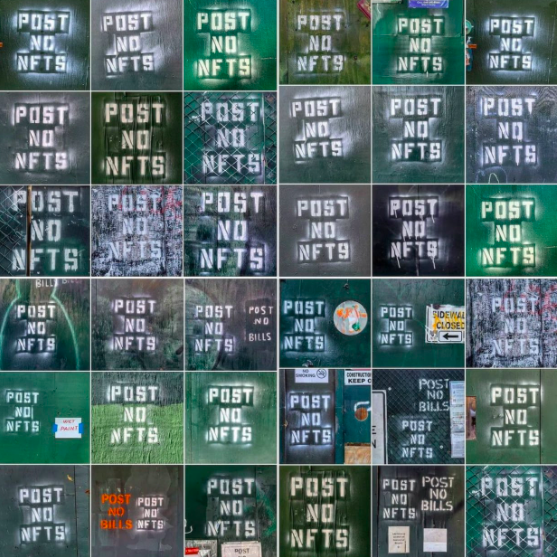 Recently, independent studies of the carbon footprint of NFT sales found a monstrous abuse of energy resources when compared to conventional transactions. One such sale was of a set of musical cherubs created by Claire Elise Boucher, a pop musician known more widely as Grimes. The musician’s NFT collections, “The Bitcoin Angel” and “WarNymph”, sold for a combined $5.8 million dollars after a mere thirty-six hours on the market, had many thousands of bids placed by hopeful owners from around the world, each with their own gas fees. The net tonnage of carbon emissions created by the sales was around 590 tons of carbon, or enough energy to power 261 homes for a year.

The blame for this environmental harm is not meant to be directed at Grimes or any digital artist making NFTs, but more so at the speculative crypto-mining operations that levy huge environmental costs, as Shanti Escalante-De Mattei skillfully reported in ARTnews back in April. However, the harmful environmental impacts of working with Ethereum, as well as the high profile NFT sales that have raised eyebrows about potential conflicts of interest between high buyers and sellers, means that most street artists will find themselves focusing on the streets a while longer.

One argument that tries to make peace with the advent of this power-thirsty new medium is that traditional art fairs, gallery shows and even spraying paint causes environmental damage that digital art does not. This does not account for the fact that making NFTs themselves do not produce carbon emission; it is the mining with the Ethereum crPlus there are NFT marketplaces such as as OpenSea where an artist can list potential NTfs without the expense or environmental impact of speculative NFT minting, and whole web communities like this one set up by artist Memo Atken, devoted to pumping more “sustainable” crypto-art, which lends itself to capturing more great works of street art for tokenization.

And after all; there’s money to be made. Sculptors, graf writers and mural artists who want to digitize their works and mint them as NFTs on platforms like Nifty Gateway, can always set a royalty for each time their NFTs change hands, like Beeple did, ensuring that if the popularity and value of their work balloons, they’ll get to see some of the benefit. This only works if the artwork itself catches on. As was the case for Adrian Wilson, an NFT minting can be a cautionary tale. 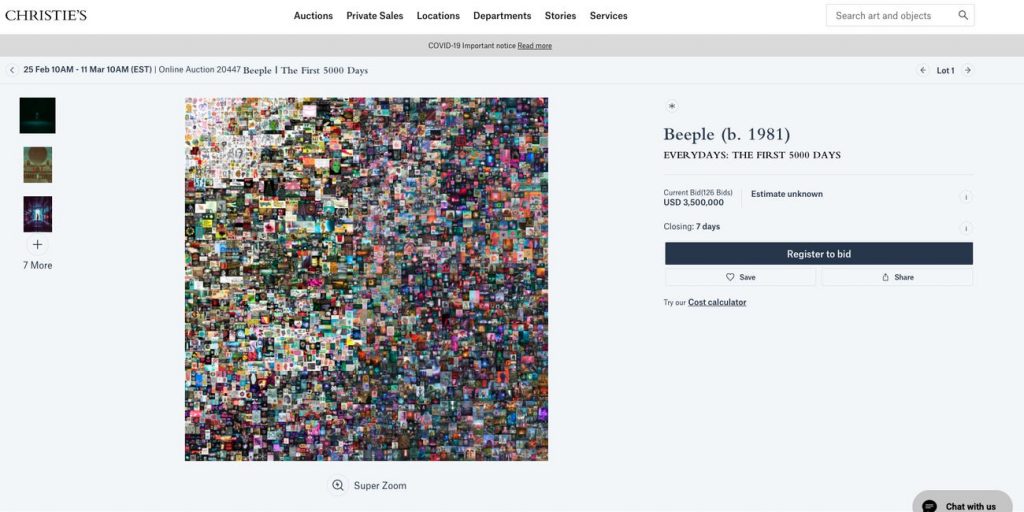 If we are looking ahead, it’s impossible to deny that the non-fungible token holds real value for artists in the longer run. They preserve authenticity in an environment (the worldwide web) that is rife with bad actors selling unauthorized reproductions of intellectual property, regardless of the original medium. And as the Internet morphs and grows with new tech, we are seeing more and more interaction between physical space and the world online. For example, augmented reality technology has already been used to pilot innovations in food service, so why not also use this same innovation to add dimensionality to our street art? If a mural is trying to convey a whole story, the artist could in theory pin the whole story to a QR code in the corner of their image. If the whole world does embrace the NFT and the blockchain tech it’s built on as a legitimate platform for the preservation of art and culture, the artists with means would be foolish to look the other way.

The intrigue we feel when we hear about a 12-year-old boy who made over $300,000 selling whale art is natural, but the art we see on the street is a unique and deeply reflective medium all its own. The demands of forthcoming generations of digital natives will certainly push statues and murals and graffiti into cyberspace, but for now at least, we are still deeply linked to these artistic representations of the corporeal world we live in. By his own rite, Beeple calls his work crap (check his Instagram tag), but to quote Jerry Saltz “There will be good NFT artists, there will be a Francis Bacon of NFTs”. We just haven’t met them yet. Street Art is certainly ripe for an NFT takeover, but there are limitations in the NFT’s current form that are keeping many street artists from getting involved. For one thing, the technology we’d logically use to interact with these digital objects (Web 3.0, AR, and VR) are still in their infancy. Will the NFT have its place in the history of 21st-century street art the same way the Daguerreotype did with photography in the 19th-century, or is the non-fungible token itself truly the next phase of reprintable art? At least, for now, the heartbeat of street art in the age of the NFT remains in the street.

Noah Daly is a New York-based writer and journalist. Since 2016, he has traveled extensively throughout Panama, China, and Western Europe reporting on politics, human rights, and art. In the days before COVID, he joined the staff of the Arthur L. Carter Journalism Institute at New York University as a student advisor and administrative aide for the graduate program. A New York native and a graduate of Brooklyn College, Noah spends his free time surfing and studying Brazilian Jiu-Jitsu.