Nkem Okwechime Creates His Own Formula

As I walked next to Nkem Okwechime on Glasgow’s Allison Street, both of us were peering down at the sidewalk to scour the pavement for sunflower seeds. “There’s usually lots of them,” he said to me. Though we didn’t spot any sunflower seeds, there were plenty of corner stores selling all sorts of other colorful spices. After our initial meeting in the Shawlands neighborhood of Glasgow’s south side, Okwechime offered to give me a tour of the streets that feature in the prints he made to document the growing immigrant youth culture in Scotland. It isn’t every day that you get an opportunity to get a guided tour from an artist through the landscape that inspires them, so I was eager to get to see Glasgow through his eyes.

Okwechime grew up in South London and later relocated to Dundee with his mother, a Scottish artist, but he retained the accent from the neighborhood of his youth. Though South London is a predominantly Caribbean neighborhood, Okwechime was raised by both his Nigerian father and his Scottish mother as one of the few Africans on his street. In Dundee, he and his mother worked at screenprinting company, but when he enrolled at Glasgow School of Art, he decided to give printing his own work a go.

That printing eventually involved into his fashion label, MRLC, which he debuted at his degree show in June 2022. The brand’s name comes from his mother’s initials, a tribute to how they got their start together. “I’m a total mama’s boy,” he admitted to me while sipping a Coke in Partenope. I took an immediate liking to Okwechime’s down-to-earth, direct style and openness about his artistic process. Before he was a printmaker, he was drawn to the direct, humanistic nature of photographing day-to-day life in South London.

“Photography shows what you’re interested in without you having to say it. You learn something new about yourself when you do it,” he said. His photos of South London captured the comings and goings of locals outside Morley’s, the staple chicken joint he described as having “always shenanigans,” including sometimes scuffles and brawls. “But it’s all about perspective, because you’d look at the photo and if the kids were dressed in private school clothes, maybe people wouldn’t see it the same way.” 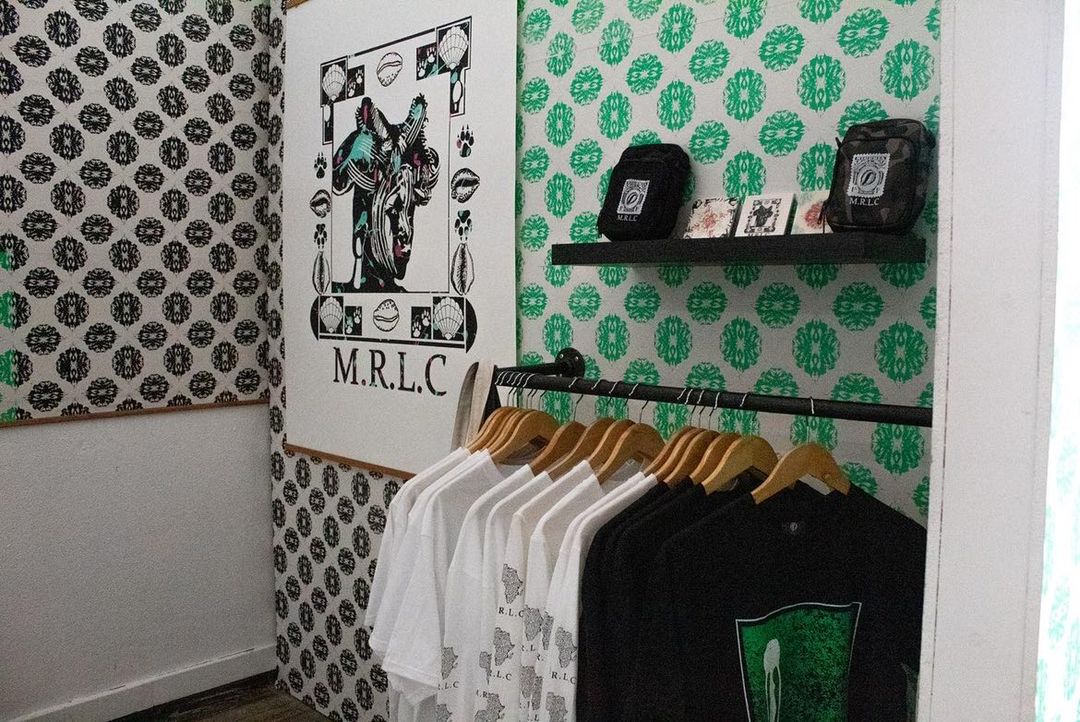 “Photography shows what you’re interested in without you having to say it. You learn something new about yourself when you do it.”

Occasionally, people in the neighborhood would see him with his Russian camera from the ‘50s and squint at him with suspicion. “People’d always think I was police or immigration,” he explained. But he was determined to capture what he viewed as an unexplored aspect of British society, something which grew even more when he moved to Glasgow. “There really isn’t a foundation for people of color in Scotland. It’s where England was in the ‘70s,” he said. “I took all the Asians and Muslims as my black friends because there were no black people.”

That brought him to photographing the Allison Street and Pollok Shields neighborhoods of Glasgow, which show a side of Scottish life few outsiders care about or understand. But he hopes that in twenty years, the kids he sees on the sidewalks and stoops will be artists in their own right, pioneers of a new movement of art in Britain.

There was a certain irony to capturing working-class life while at Glasgow School of Art, which, like many art schools, still feels like an institution meant to keep creative arts as a bourgeois pastime. But one of Okwechime’s creative strengths is his ability to see through façades. “I was working at a construction site at one point, just chatting with these tradesmen lads, and I really felt like I had to prove that I knew the right things to say, like when you’re trying to understand Legalese,” he said. “But then when I was back in school listening to the lecturers, I realized that everybody’s just talking their own version of Legalese. You talk all fancy, but you’re all a bunch of insecure bastards. Just chat like me, mate!” 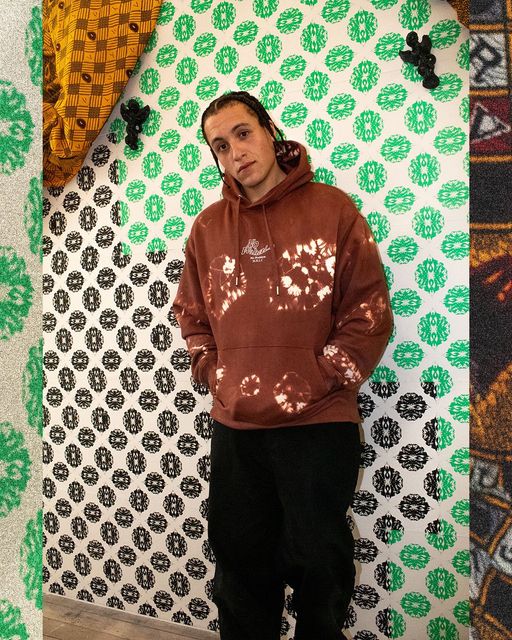 “But then when I was back in school listening to the lecturers, I realized that everybody’s just talking their own version of Legalese. You talk all fancy, but you’re all a bunch of insecure bastards. Just chat like me, mate!”

When we walked around Pollok Shields, he told me a story about a local protest that erupted after immigration detained a South Asian resident. It was Ramadan, and the white art students who lived in the neighborhood immediately assumed the local man was Muslim and were incensed on his behalf, but it turned out later he was a Sikh. That anecdote highlighted the inherent hypocrisy in much contemporary student activism, but he remembered that neighborhood guys were somewhat grateful that people with less to lose were out protesting in the streets and yelling at the police.

Much of Okwechime’s work explores what he terms “bravado.” He recalls doing a photoshoot for MRLC with a friend and telling him to “do me one your mum would like to see” and watching his friend’s expression soften. “Working-class guys have a lot of this bravado,” he elaborated. “Like, ‘never even hug your best friend’ bravado.” In his prints and clothing, he’s interested in blurring the line between vulnerability and power. 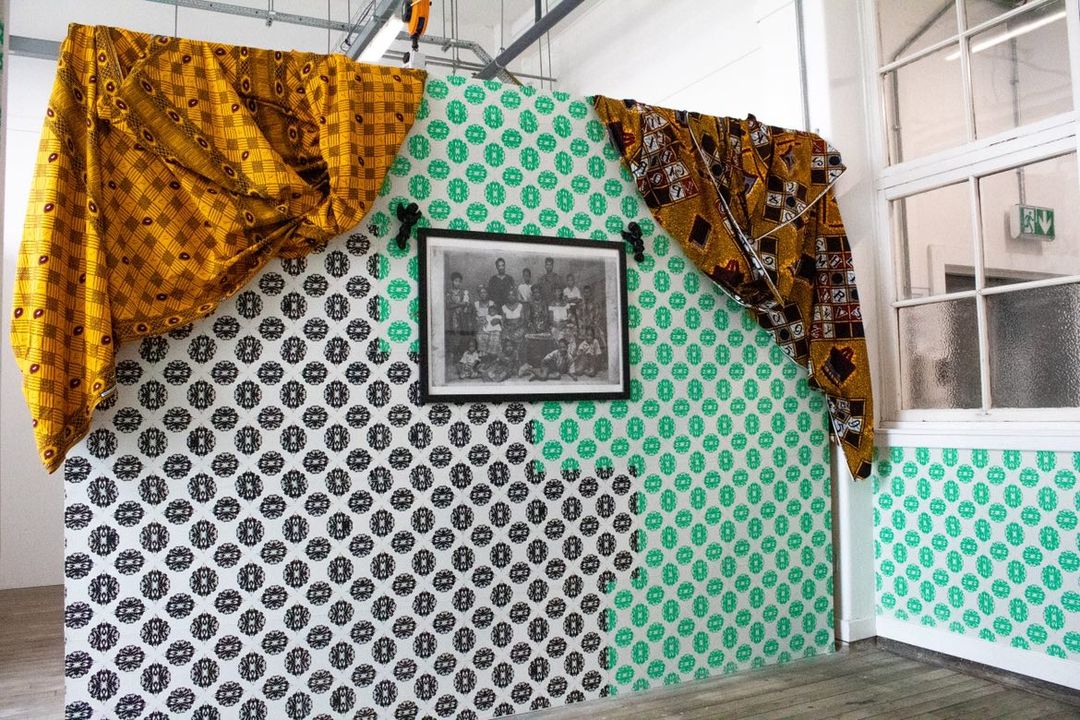 His degree show featured a shrine to his family, including a photo from the ‘60s of his father’s family in Nigeria. “It was the only photo I have of my grandmother,” he said. “And there’s my great-grandmother, too, who lived to 116. It was really a matriarchy.” The picture itself is striking, full of elegant women with serene stares. The use of the photo demonstrates how Okwechime’s pride in his Nigerian background is mixed in with deeply personal love for his family.

He also plastered an entire room with ornate black and green designs surrounding his family shrine for his degree show. Some shapes in his print designs are more abstract, but one that’s unambiguous is the cowry shell. Okwechime took colonial British stamp designs from Nigerian history and re-appropriated them to have the cowry shell, a precolonial currency, onto them. His work earned him the Glasgow Print Studio Prize award, but its deeper purpose is that it helps Okwechime reconnect with his roots. Though his father isn’t heavily involved in his art career, he credits his industrious spirit for helping him succeed. “Africans are the most stubborn people,” he said. 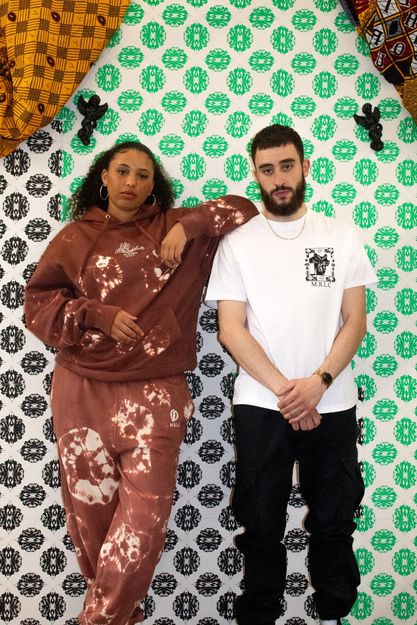 “In math and science, you have a formula you use to get an answer. And there’s nothing wrong with that. But in art, you get to create your own formula.”

In terms of what’s next for Okwechime, he wants to do an MRLC shop takeover and continue to show his photography and prints. But as we wove through the Romani and Bangladeshi flags of Allison Street, I got the sense that no matter what Okwechime does, his astute, sensitive style and humanistic artistic process is a finger on the pulse of Great Britain that few are able to achieve. His vision is fresh and exciting, and you only have to walk the streets of Glasgow with him to get drawn into it.

“In math and science, you have a formula you use to get an answer. And there’s nothing wrong with that. But in art, you get to create your own formula,” he said. A formula doesn’t guarantee you’ll get the result you thought you’d get. But a solid, earnest formula is sure to outlast a flashy result, and Okwechime’s is already paying off.

Nkem Okwechime’s clothing is available for purchase on the M.R.L.C site and his Instagram.