OBEY: An Introduction to the Iconography of Shepard Fairey

Shepard Fairey is a legendary name within the pillars of art culture, and one of the few street creatives who has achieved widespread mainstream success. As an American contemporary urban street artist, activist, DJ, and fashion designer, most Americans have seen his work whether they realize it or not. This is the mark of a true icon: defined as important and enduring symbols, or someone who is the object of societal attention and remembrance. By using a cohesive palette and eye-catching imagery, Fairey covers all the bases when it comes to producing a recognizable palette of motifs, a tactic he honed with his memorable Andre the Giant imagery, a symbol that has come to represent not only Fairey but his OBEY campaign clothing brand. 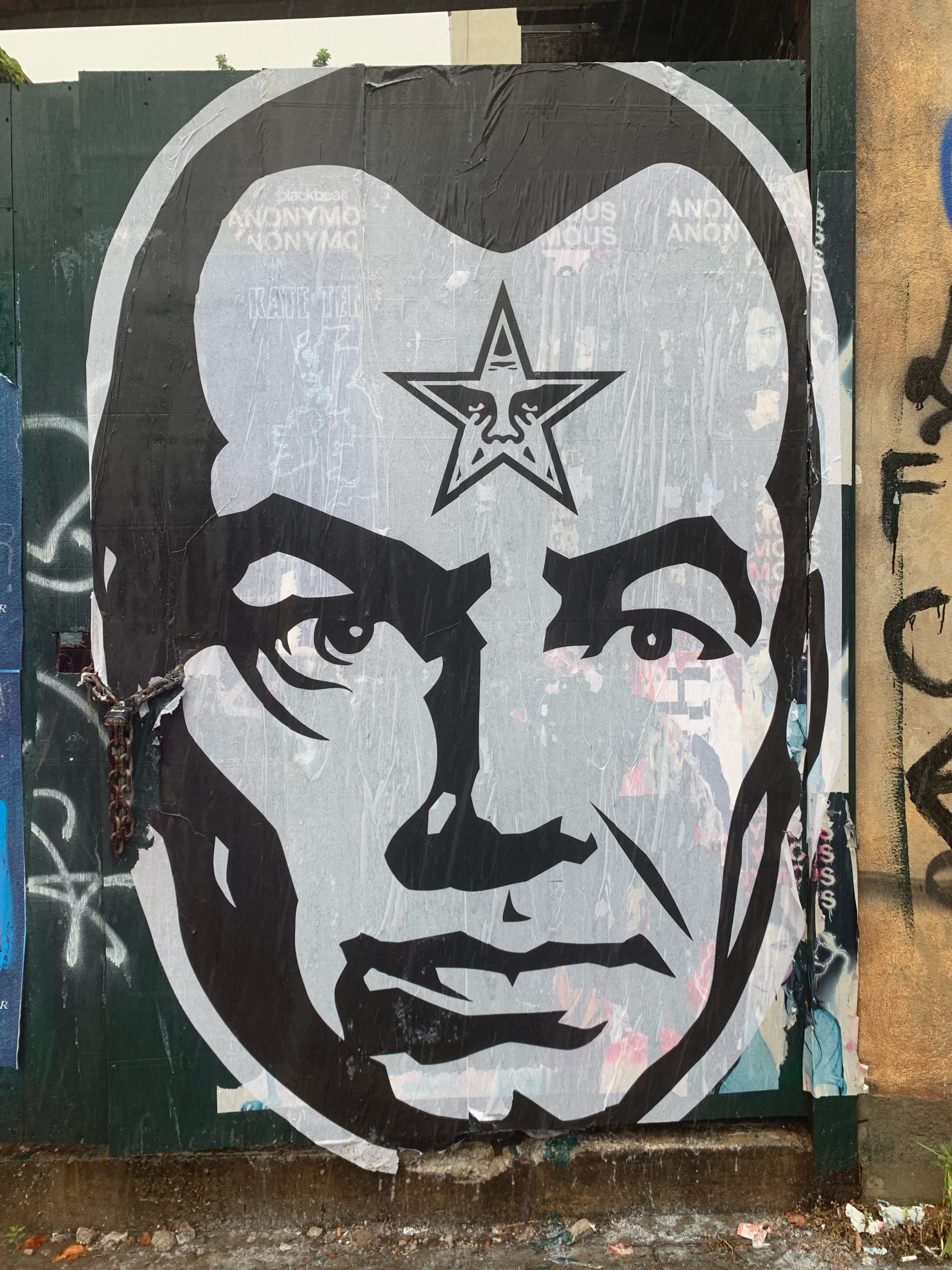 To give a little history, the OBEY campaign was conceived in the summer of 1989 by Fairey while receiving a Bachelor of Fine Art from the Rhode Island School of Design (RISD). Originally Fairey suggested to a friend, that he use an image of Andre the Giant from a newspaper as fodder material for learning to create stencils for screen printing. The friend thought the image was stupid and told Fairey, who responded sarcastically, “What do you mean? Andre the Giant is going to be taking over.” Unbeknownst to either of them, this statement was truer than anyone could have guessed. From there Fairey went on to utilize the image himself, creating stickers, wheatpastes, and stencils that read “Andre the Giant Has a Posse.” It started as a bit of an inside joke but grew into an iconic symbol of both Fairey and street art as a whole. 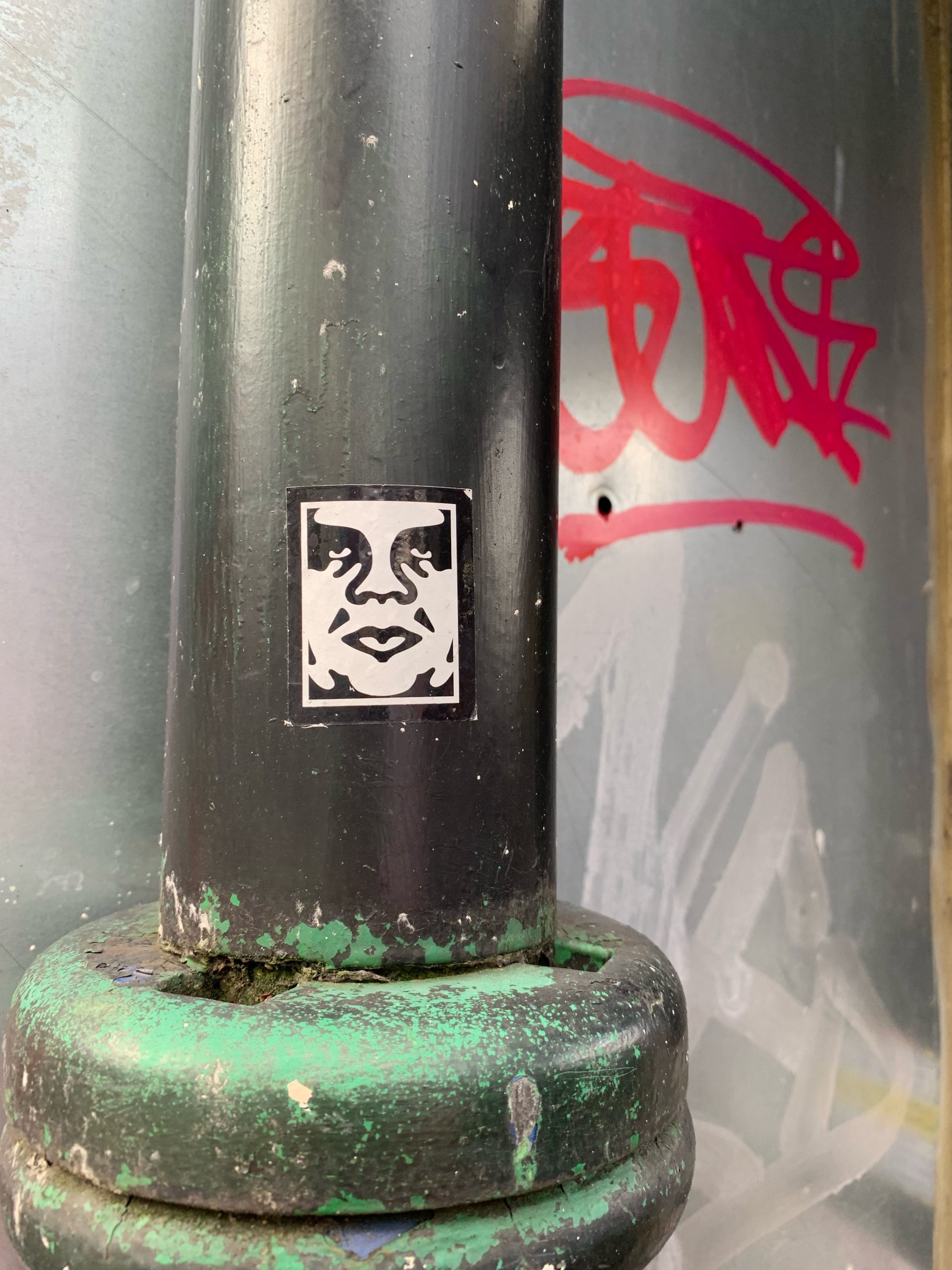 The image features professional French wrestler and actor Andre Rene Rousimoff, known in popular culture as Andre the Giant, due to his great size and gigantism; Andre stood at 7.4 ft. and approximately 520 lbs. You might recognize him as Fezzik, the giant in the 1987 American fantasy adventure comedy film The Princess Bride. Fairey accompanied this rough stencil image of Andre’s face with the words ‘Andre The Giant Has a Posse,’ including his height and weight. 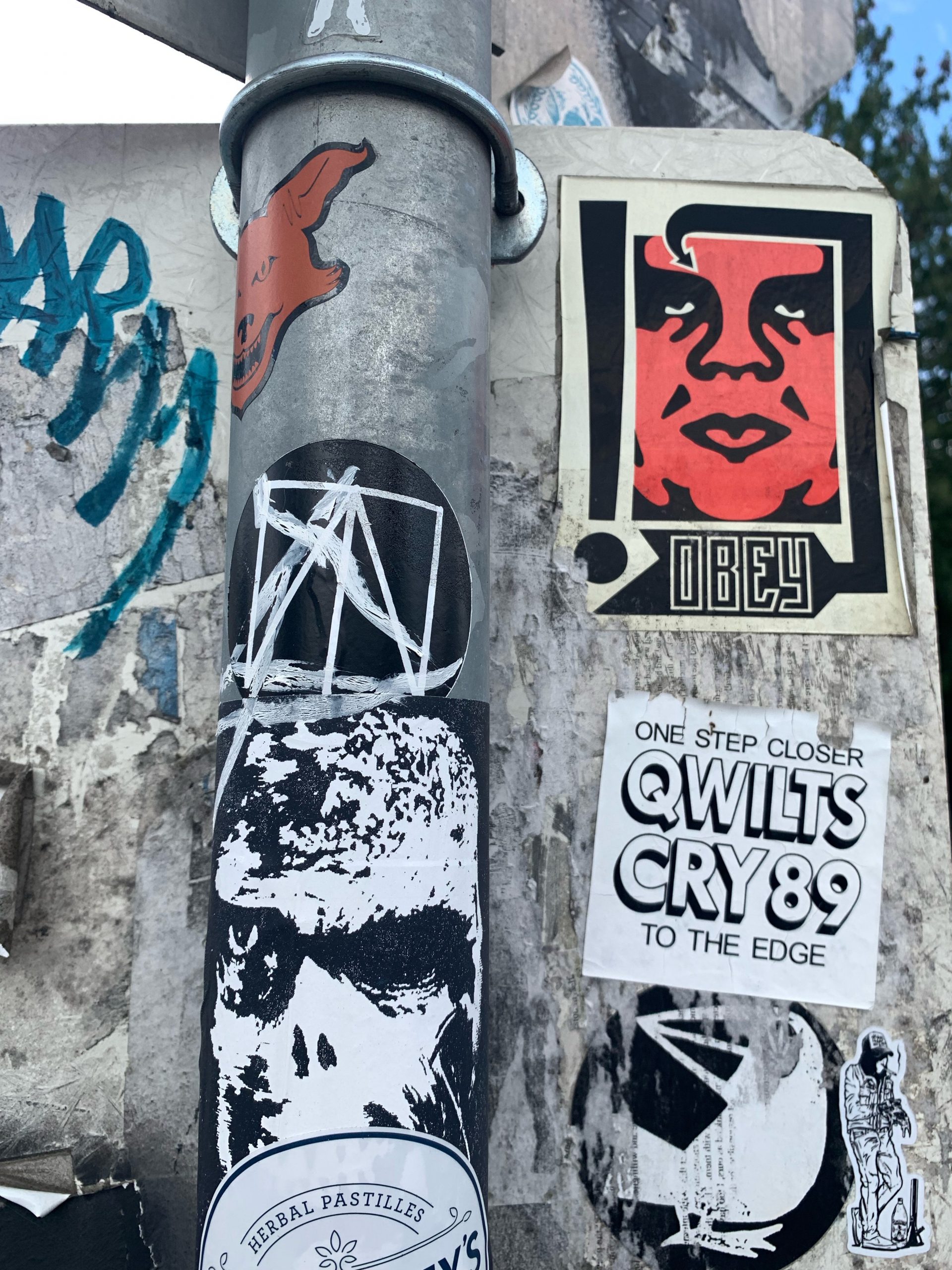 Stylized as a bootleg mugshot, the design is notable for its bare-bones simplicity and ransom letter-esque typography, and xeroxed black and white vibe, reminiscent of the punk/counterculture bands of the 1980s. This striking style helped the image quickly gain popularity, as Fairey got up around town and in his travels. It’s worth noting, that Andre has little to do with the message behind OBEY. Rather, Fairey used this distinct face to catch the viewer’s eye, with this indirect use of popular culture reference becoming a theme amongst Fairey’s works.

Growing up in Charleston, North Carolina, Fairey always had an affinity for art. Painting and drawing were something that came naturally, however, in those early years finding art that spoke to him was limited by location. Around age fourteen, Fairey got into skateboarding and from there into pop and punk culture, finding artists that created the base influences for his work today. Particularly fond of the album artwork of bands like the Dead Kennedys, Black Flag, and The Sex Pistols, Fairey sought more art of the same vein. Soon, his interests transitioned into skateboard graphics of brands like Santa Cruz, Powell Peralta, and Zorlac, which inevitably lead full circle back to popular culture influences and artists such as Andy Warhol and Jasper Johns

Based in Portland, OR

Moira Hampson is a street art photographer based in Portland, Oregon. Her passion for street art has driven her to travel the world to learn about street art and its relation to community.