All City Legends is an art supply store in Harlem, New York City (Located at 2854 Frederick Douglass Blvd, New York, NY 10039.) On January 7, 2022 the store hosted an opening show featuring art works by Optimo NYC/Say No Sleep and Muffin Man, with the show on view until January 21st, 2022.

I briefly interview both artists about their work and art monikers. 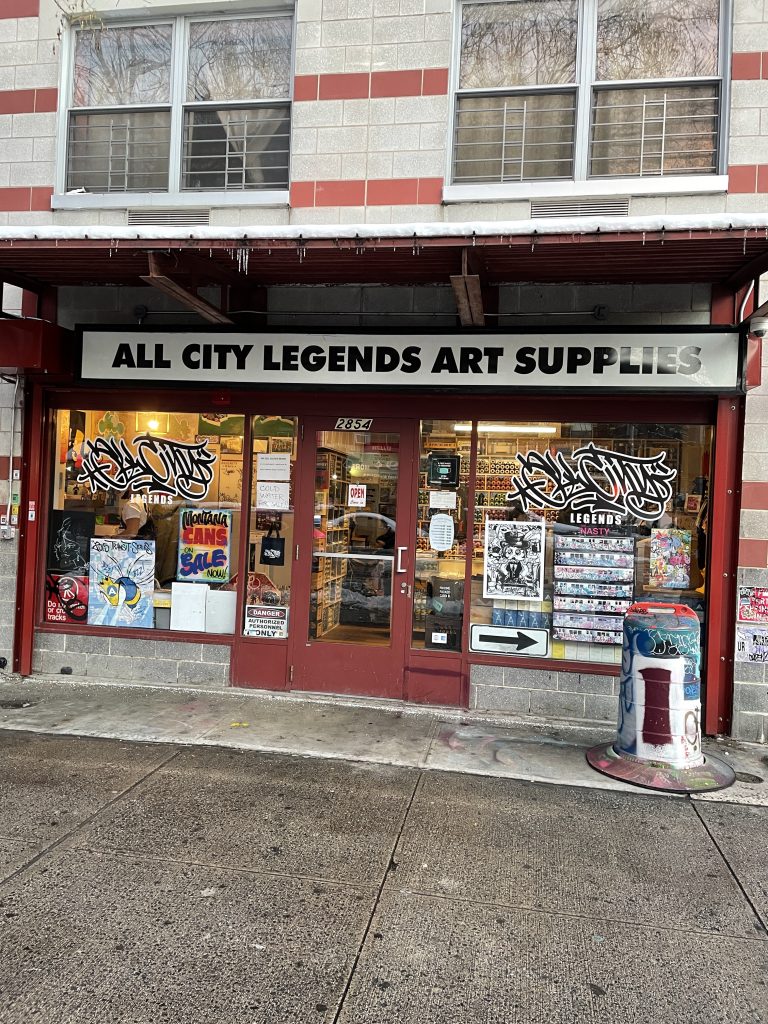 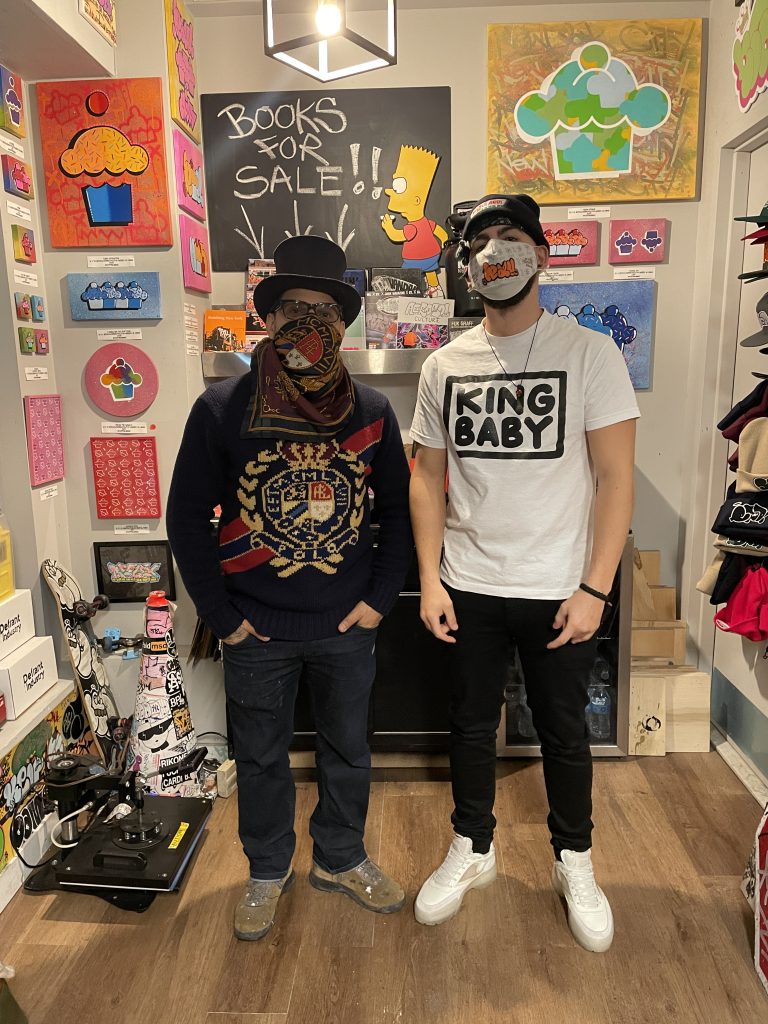 I asked Optimo NYC about his name SAY NO SLEEP.  The short version of the story is that No Sleep was the name of his character in 2010, in 2015 he changed his Instagram handle to fit the moniker. Overtime he put the names together as SAY NO SLEEP BY OPTIMO NYC, which became the name of his clothing brand. The reason behind the characters name is a part of the artist’s message to say no to drugs, and to say no sleep, and instead to always be painting.

If you have traveled the 5 boroughs of New York City you have probably seen one of his Say No Sleep characters on the streets. Optimo NYC is a well-known artists in New York City and internationally. At All City Legends he exhibited new works he made specifically for the exhibit along with his popular Say No Sleep t-shirts.  (I even bought one t-shirt for myself.)

Optimo NYC presented various works on wood using acrylic, aerosol, molotow markers, paints and silk-screening. He also exhibited works on canvases and paper.  All the works contain his top hat characters in sizes 7in x 9in up to 15in x 30in.  His biggest canvas 15in x 30in was a painting made with acrylic and opaque ink with famous characters wearing top hats with Betty Boop at the center of the painting. 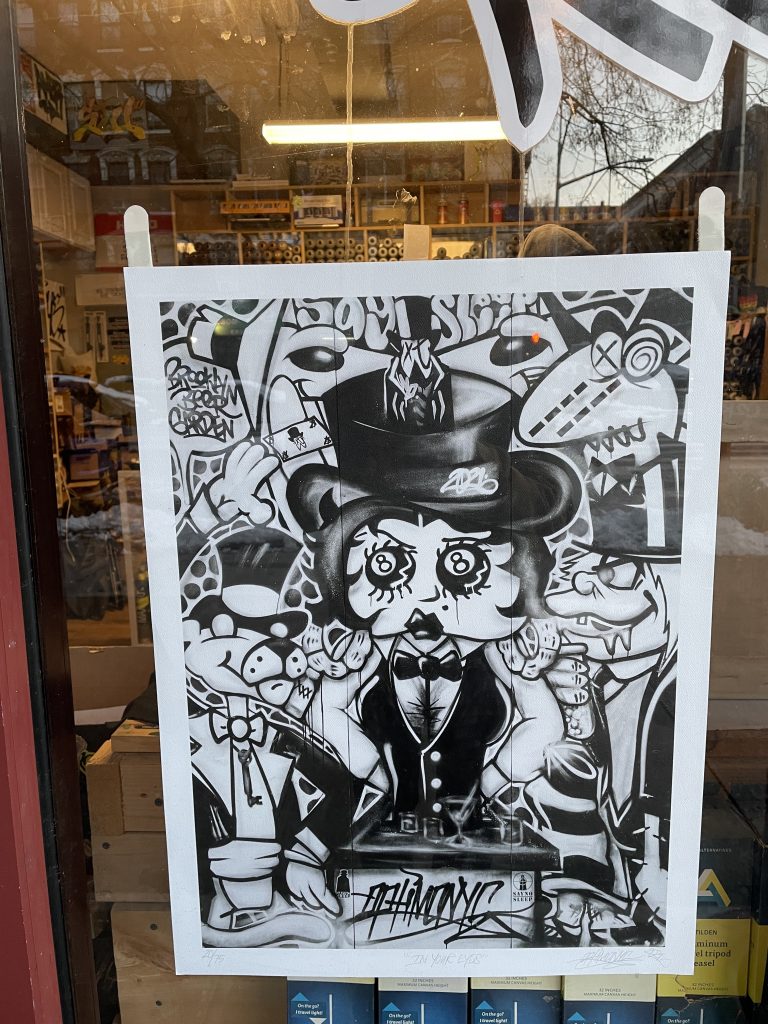 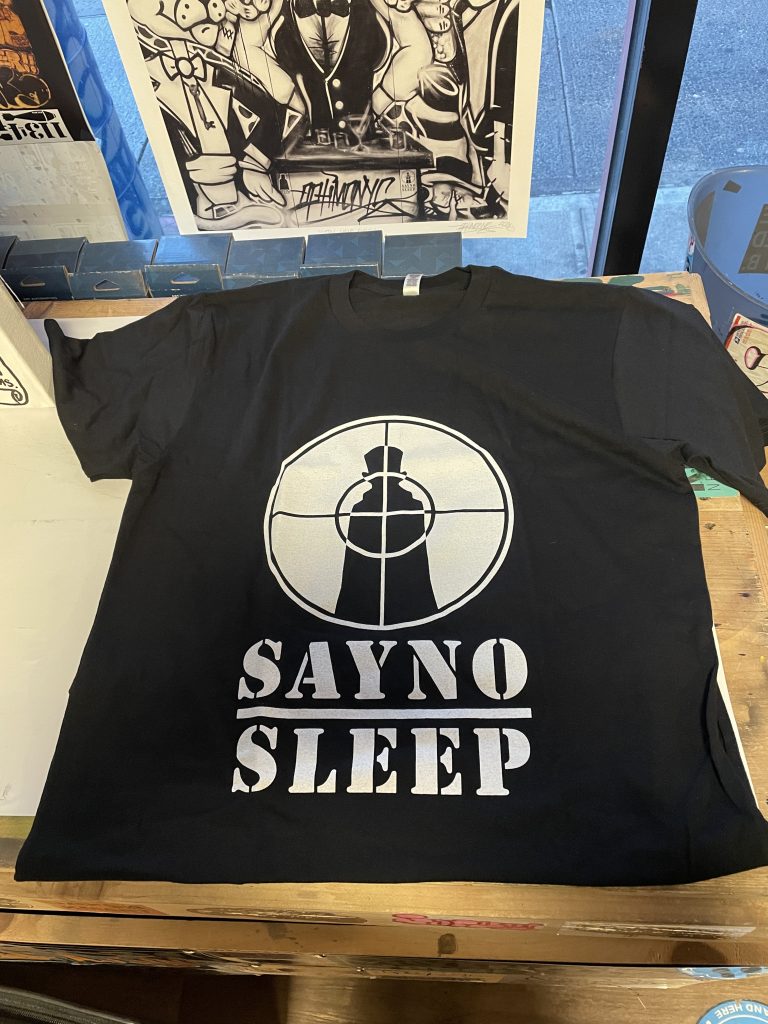 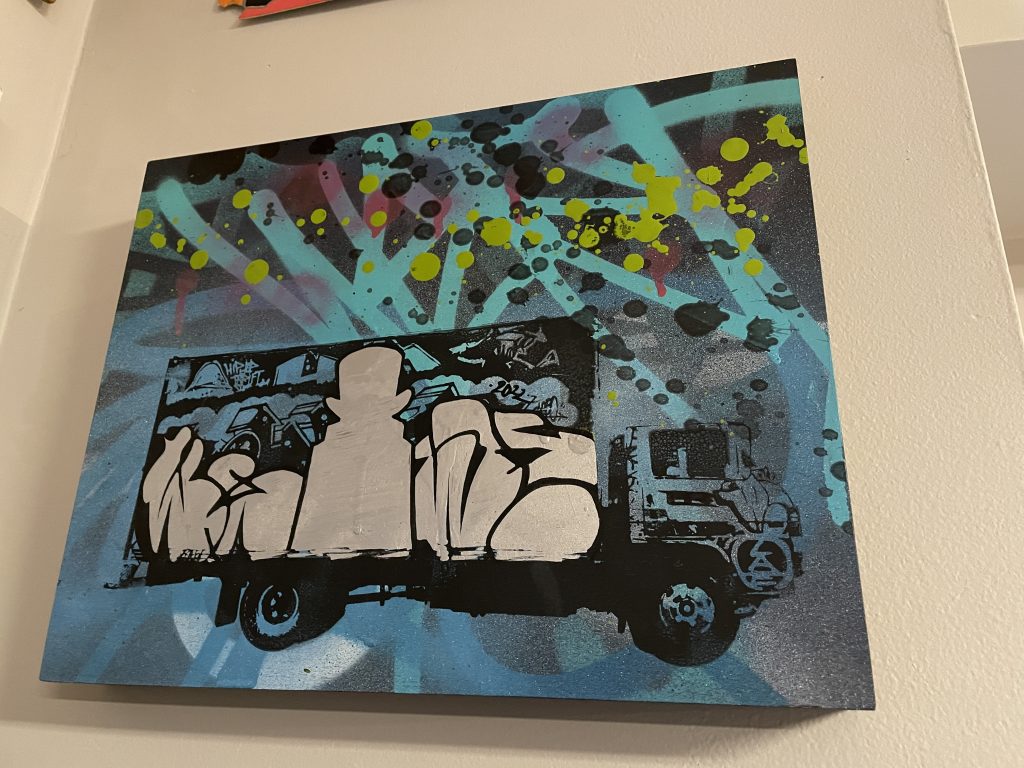 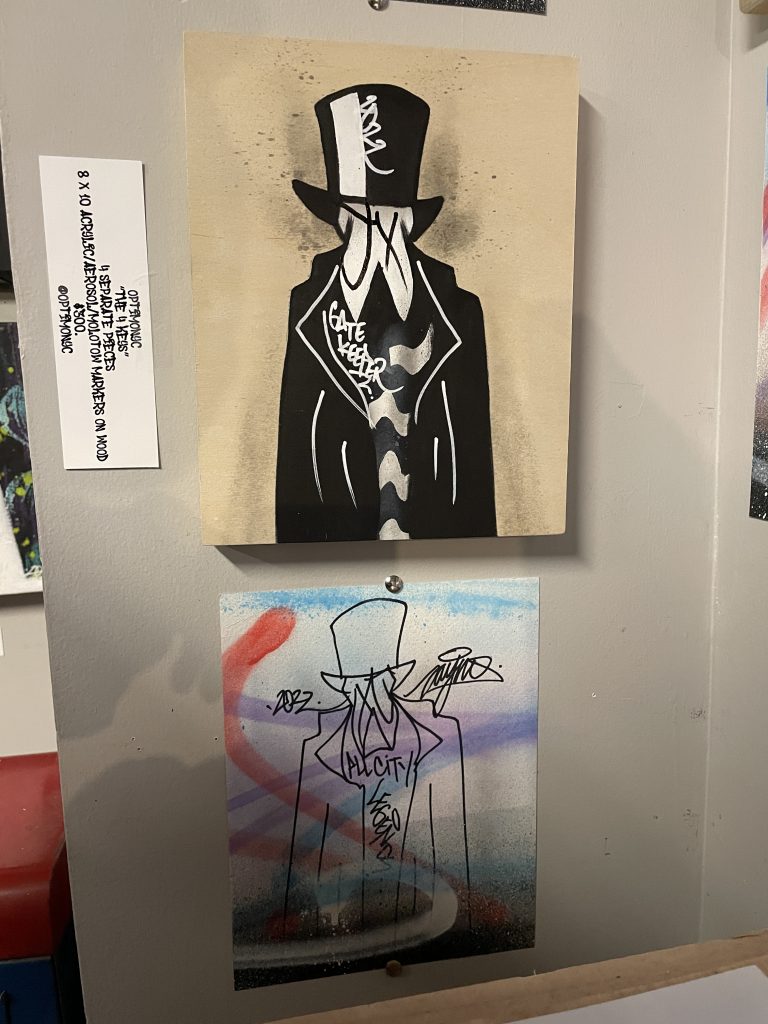 Muffin Man is a native of the Bronx. As his name suggests, food and pastries are major inspirations for him.  He doesn’t used letters in his art works or graffiti tags, instead his tag is a cup cake.  He picked up the name Muffin Man from one of his friends growing up in the Bronx.  He liked the name Muffin Man and decide to use it as his tag when he became a writer.  Muffin Man exhibited merchandise, throwies on canvases and his recent collaboration canvases with the  Dominican Republic based crew BWH – Bombing With Honor.  His works range in sizes from 3in x 3in to 30in x 24in. 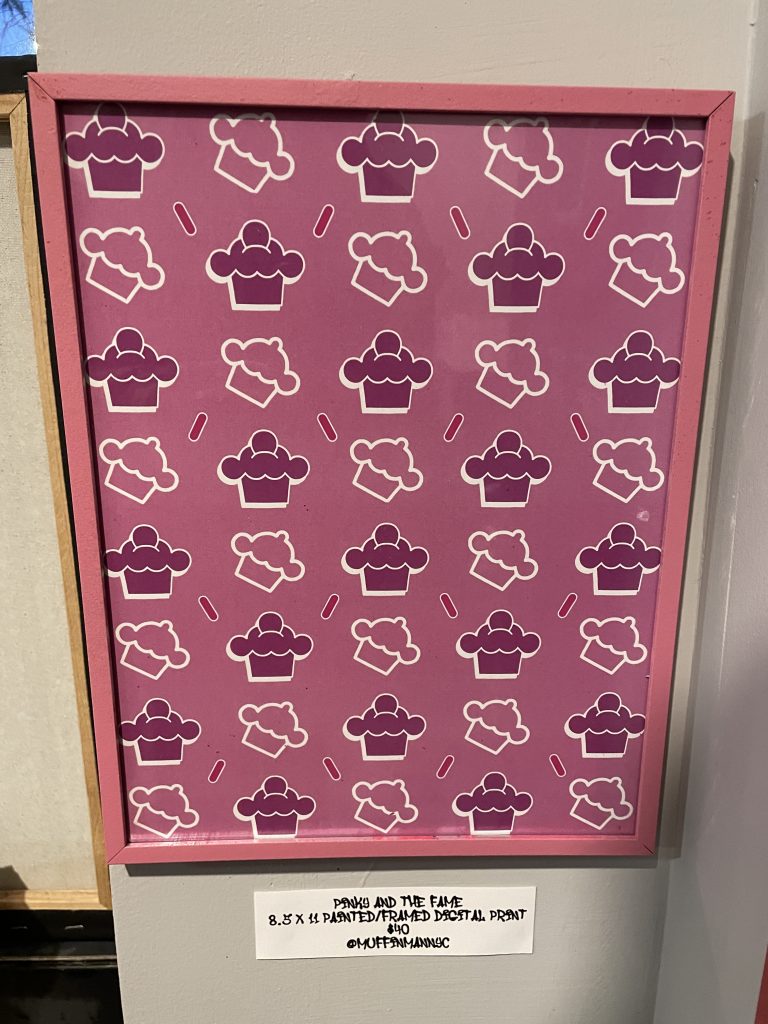 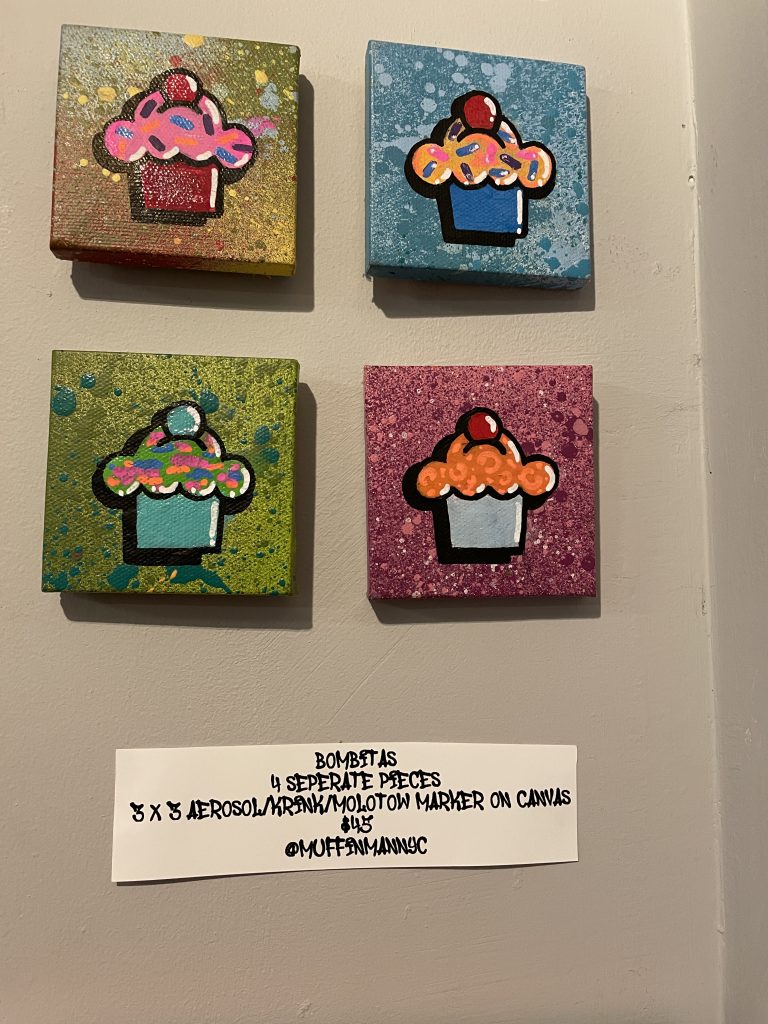 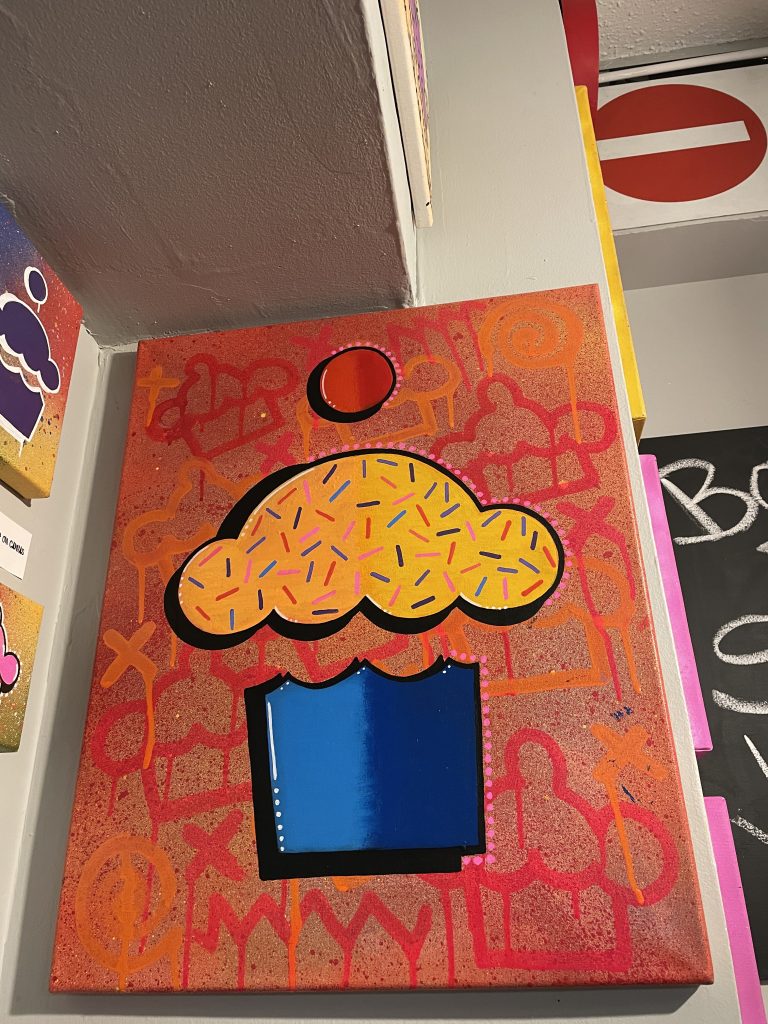