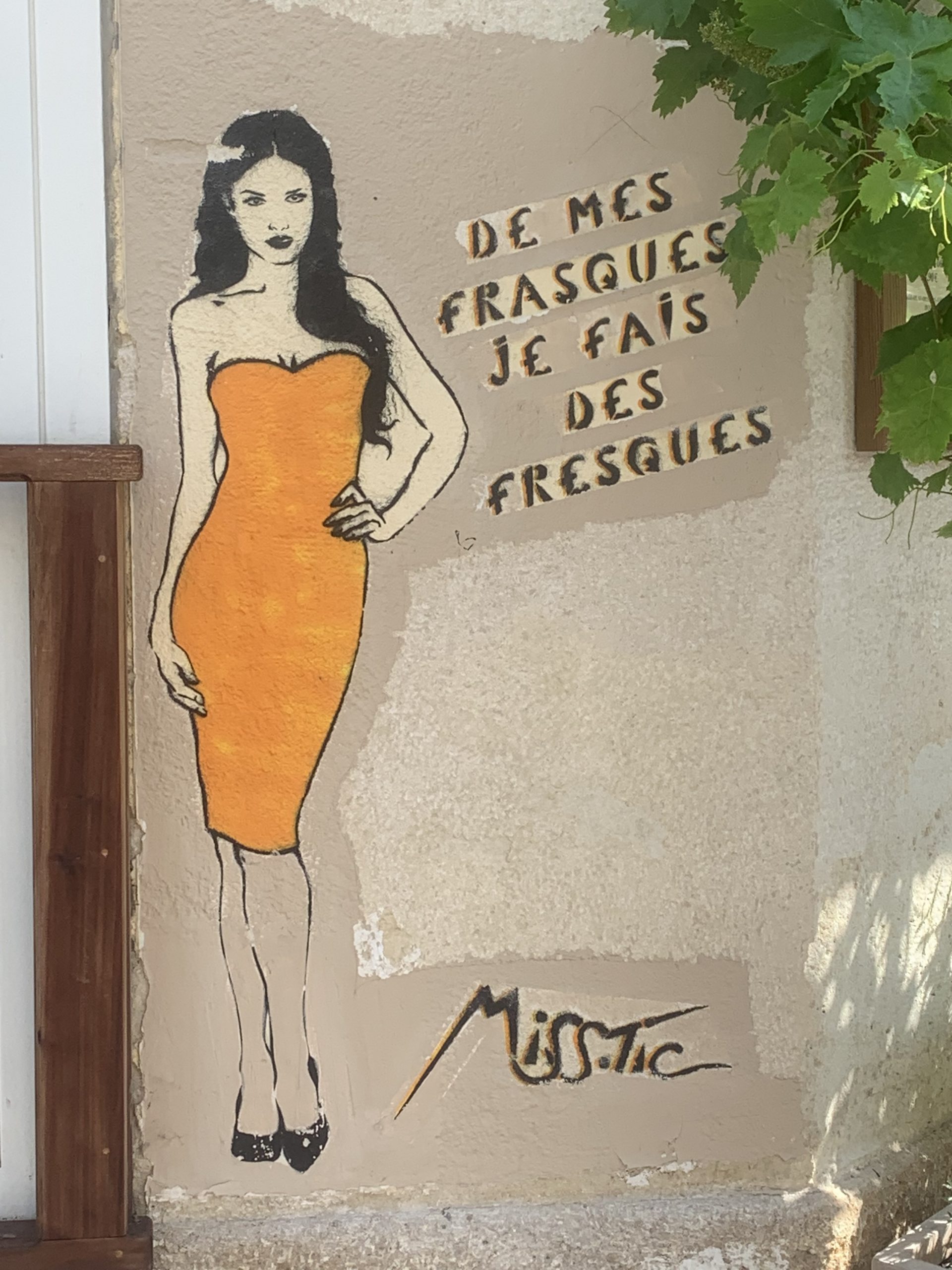 PARIS – Mais oui, France has lost many great artists over the years, Monet, Renoir, Degas, Cézanne, the list is longer than the lines at the Louvre. But Malak’s remark eulogized not one of France’s vaunted mainstream painters or sculptors, but a giant in the world of street art, Miss Tic, the legendary feminist stencil specialist who died recently at 66 taking with her the raven-haired pin-up whose likeness, not far removed from that of its creator, graced the walls of Paris’ picturesque streets and alleys for decades.

Malak’s remarks, which went on to call Miss Tic’s work iconic, feminist and poetic, signaled a continuation in Paris’ embrace of street art as a legitimate and valued contribution to a city known as much for its artistic flair as for its food, fashion and fragrances. And with this embrace has come a persistent blossoming of French street art as the spray can has been handed down from pioneers like Blek le Rat, Miss Tic and Invader, to a current generation of artists with names like Nô, Ardif, Demoiselles, Akiza, Shaka, Jo Di Bona and many others. 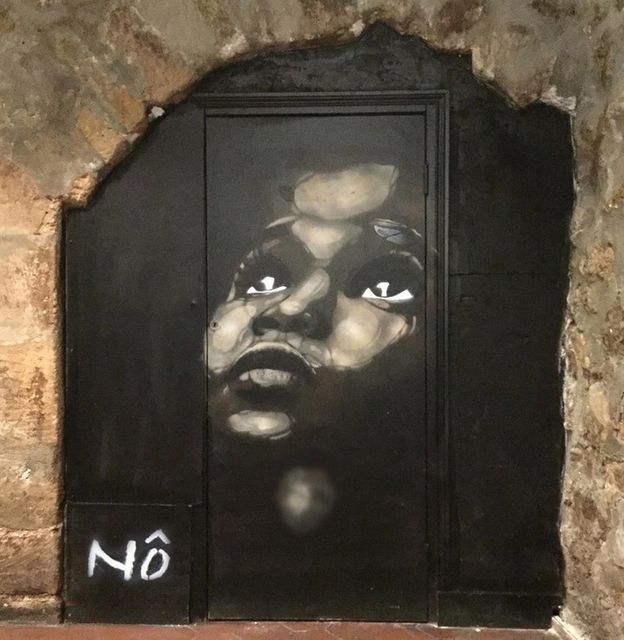 “There is a real taste and frenzy for street art these days.” — Nô

“There is a real taste and frenzy for street art these days,” said Nô, whose work often features realistic depictions of needy children and other marginalized people. “I guess because it’s alive and open to anyone, as opposed to galleries and museums, which are more closed and reserved to an elite,” he said.

Paris is home to hundreds, maybe thousands, of art museums and galleries from the globally venerated, like the Louvre and Musée d’Orsay; to those focusing on specific artists, Picasso, Rodin, Monet, to name a few; to smaller galleries that feature local talent, including street artists. And there are open air street art “galleries,” like Spot 13 in the 13th Arrondissement and the Passage des Abbesses in Montmartre, all across town. This, it has been said, makes the street Paris’ biggest museum.

Galleries in Paris, like their counterparts in New York and around the world, recognize the appeal of street art and many street artists are adjusting their practices to make a move from the streets, where size, medium and message are wholly unconstrained, to the gallery environment where, generally, more rules apply. Some do so reluctantly.

“Painting the streets will always be the best or the ‘purest,’ as you can just express yourself freely, regardless of any commercial purpose. But of course artists need to eat… so I guess at some point, selling stuff in a gallery becomes a necessity to be able to develop yourself,” said Nô.

“I think there is definitely a booming market, hence the fact that many traditional galleries seem to be more and more interested by it,” he added.
But the flourishing of street art in Paris is about much more than the alternative to the gallery world the streets provide for artists. Perhaps the main reason it thrives so, and that authorities are so tolerant, is that people, Parisians and visitors alike, simply love it. 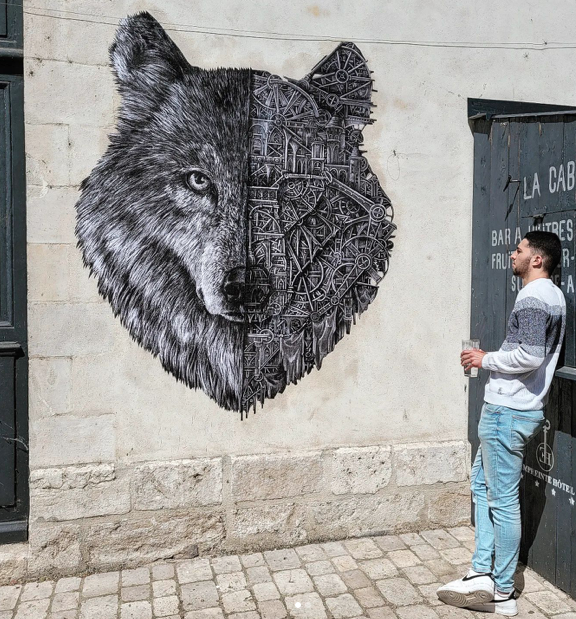 “Most of the Parisians love to see new art in the street, the inhabitants get used to it and ask for more.” – Ardif

“Paris has always been a city of art, but the street art scene seems to be really active since five or 10 years now….Most of the Parisians love to see new art in the street, the inhabitants get used to it and ask for more,” said Ardif, whose works depicting animal-machine hybrids are common in Paris streets and in some galleries. 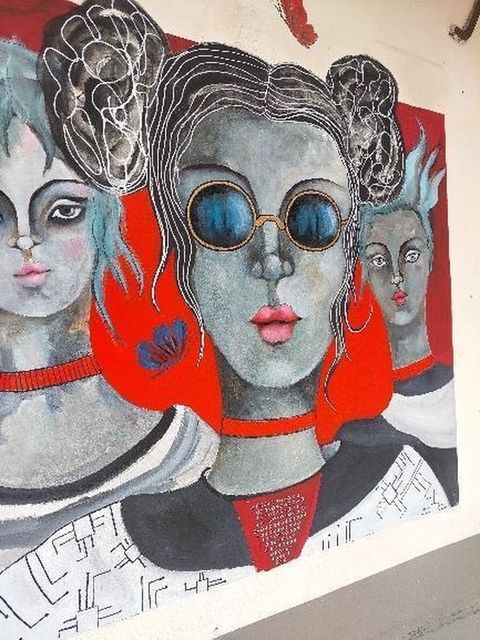 Paris, like cities around the world, is engaged in a delicate balance between encouraging artistic freedom and maintaining the integrity of its treasured architecture and countless landmarks.

Paris, like cities around the world, is engaged in a delicate balance between encouraging artistic freedom and maintaining the integrity of its treasured architecture and countless landmarks. In 1994, Paris revised its penal code to include anti-graffiti language that set penalties as high as fines of $86,000 and two-to-five years in prison for violators. That law is rarely enforced, particularly against those committing art.

“The city is much more tolerant of artists, the penalties incurred at present are much lighter,” said Ensemble Réel, an artistic duo that creates colorful murals depicting emotionally evocative faces on buildings and other surfaces in Paris. “This encourages many artists to show their work” they said

But Paris’ laissez-faire attitude toward street art begs the question, who decides what is art and what is defacement? According to Zig, a collage artist who leads street art tours of Paris, that decision commonly falls to the owners of private property and to those charged with cleaning up public spaces. “You can see where some of the walls in Montmartre are painted over, but the street art is not covered,” he said. “It’s not always perfect.”

The city and the Régie Autonome des Transports Parisiens (the Parisian equivalent of New York’s Metropolitan Transit Authority), spend tens of millions of Euros annually to clean up tags and other marks in the subway and on the capital’s many monuments, museums, government buildings, scenic street and alley walls and other locations like the sunken walkways along the Seine. That’s one reason you’ll rarely see a tag, or a fine piece of street art for that matter, on the Eiffel Tower, the Arc de Triomphe, or any of Paris’ other venerable landmarks. Parisians were shocked and saddened in 2018 when so-called “yellow vest” anti-government protesters painted slogans on the revered Arc de Triomphe. A team of workers wasted no time removing the work and the Arc reopened within days.

The history of Paris street art follows a familiar path from simple graffiti tags in the late 1970s toward free-hand aerosol driven works, stencils, wheat paste and stickers. While Paris street artists and their followers are quick to recognize their indebtedness to the New York graffiti pioneers, they also note that their embrace of the street as a venue for artistic expression was at least contemporaneous with that of other cities worldwide.

Miss Tic is a great example of this. Not just a pioneer as a woman street artist, Miss Tic was also a pioneer of the stencil street art style beginning in the 1980s, long before it became one of the most common street art mediums globally. Also paving the way for future generations of street artists was Blek Le Rat, one of France’s most famous street artists, whose ubiquitous stenciled rats ( “the only free animal in the city”, he likes to say) are acknowledged as an inspiration by Banksy himself. At the same time, Paris’ embrace of street art led to participation by a highly diverse collection of artists.

Today’s Parisian street art scene is an international one, just ask Prwnd, a Danish artist whose depiction of can-can dancers on Rue d-Orchampt worthily captures a distinctly Parisian subject. Or SMiLE, the Boulder Colorado artist whose intricate, multi-layered stencil work shows up across Montmartre and elsewhere.
Why do they take to the streets, leaving their spray-painted tracks for all of Paris to follow? Some pursue political advocacy, some see the street as a means around the gilded gates of the galleries, others, like Demoiselles just want to spread a little happiness.

“At the beginning, I started painting and pasting my “Demoiselles” in the street because I wanted everybody to see them,” the artist said. “Then someday someone said something that touched me: ‘Every morning when I pass one of your demoiselles, it brightens my day like sunshine.’ This definitely inspired me to keep on painting in the streets,” said Demoiselles, one of many woman artists following in the footsteps of Miss Tic. 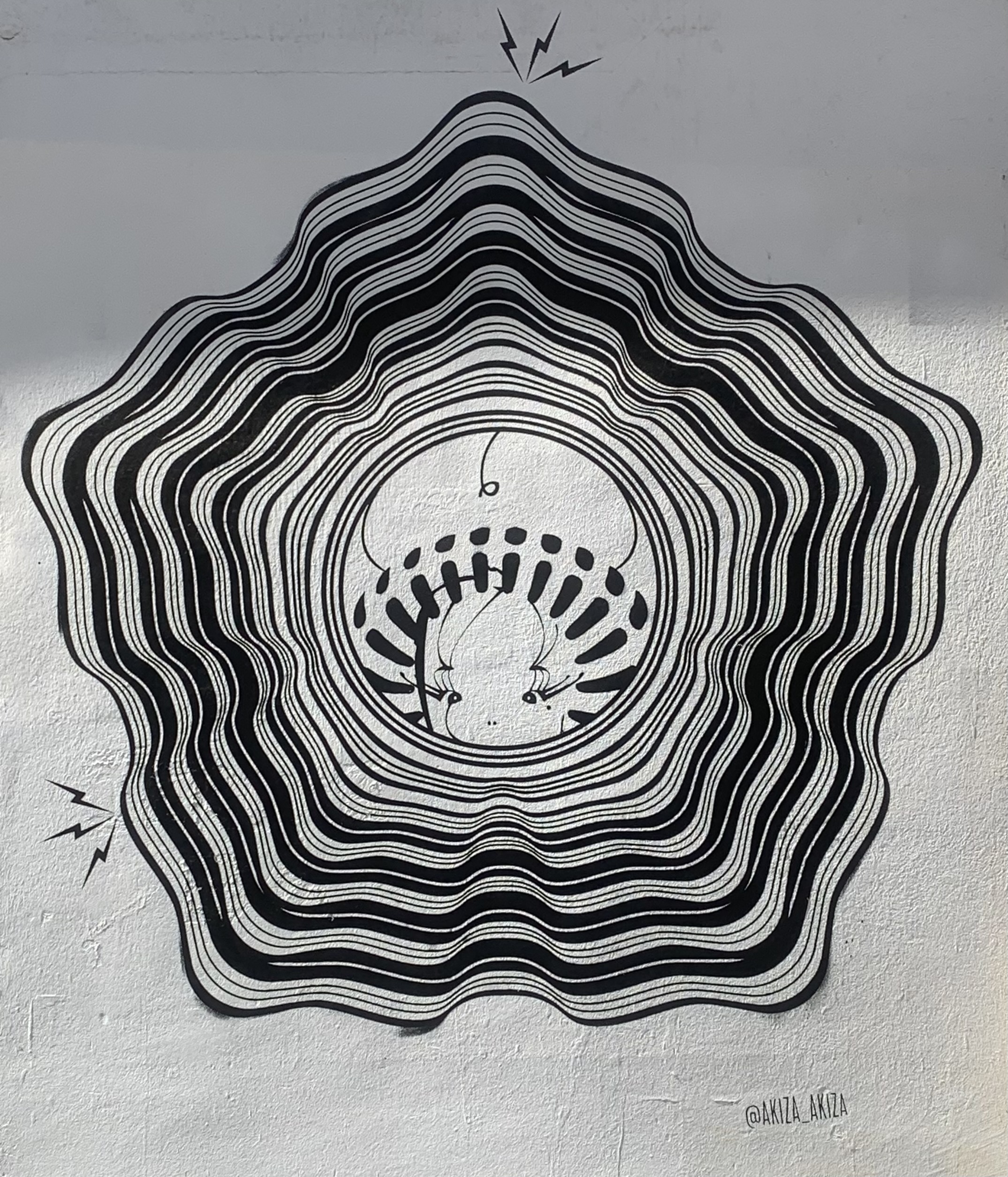 Paris street art appears to have maintained a persistent French flavor, more nuanced and perhaps a bit more cultivated than what is typically found on the streets of Bushwick or the Lower East Side.

So what about the art? Is there really a difference? It’s impossible to make broad generalizations like this, but as it has evolved in parallel to counterpart movements in New York and elsewhere, Paris street art appears to have maintained a persistent French flavor, more nuanced and perhaps a bit more cultivated than what is typically found on the streets of Bushwick or the Lower East Side. Portraiture is common, muted hues recalling sepia-tone are likewise seen, the share of works that seek realism is probably higher in Paris than in New York. Loud, screaming headlines and tags seem less common. All in all, Paris street art may be a bit more urbane, a bit less urban. 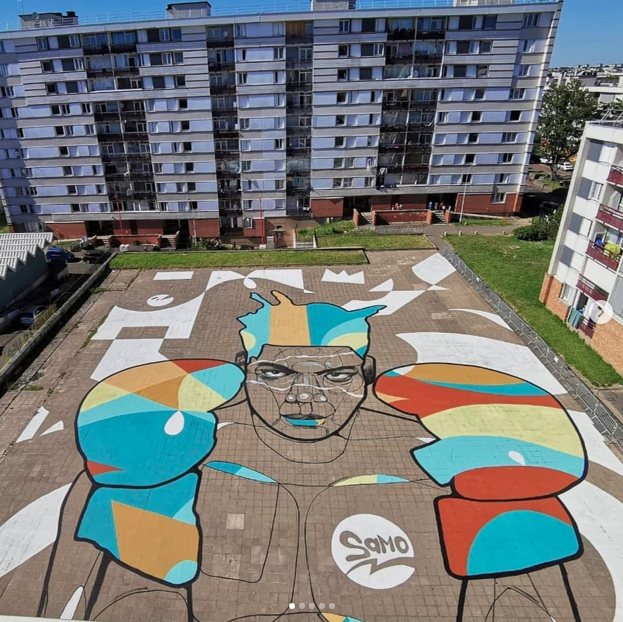 The future of street art in Paris appears to be in good hands and artists are optimistic the movement will endure, mature and evolve.

“Our movement always has plenty of ideas to see things in a different way,” said Jo Di Bona, creator of a hugely popular portrait of Michael Jackson on Montmartre’s Rue Robert Planquette. “If the galleries remain open to change, I remain optimistic for an effective and quality partnership to be able to share our emotions and our research with an increasingly demanding public,” he said. 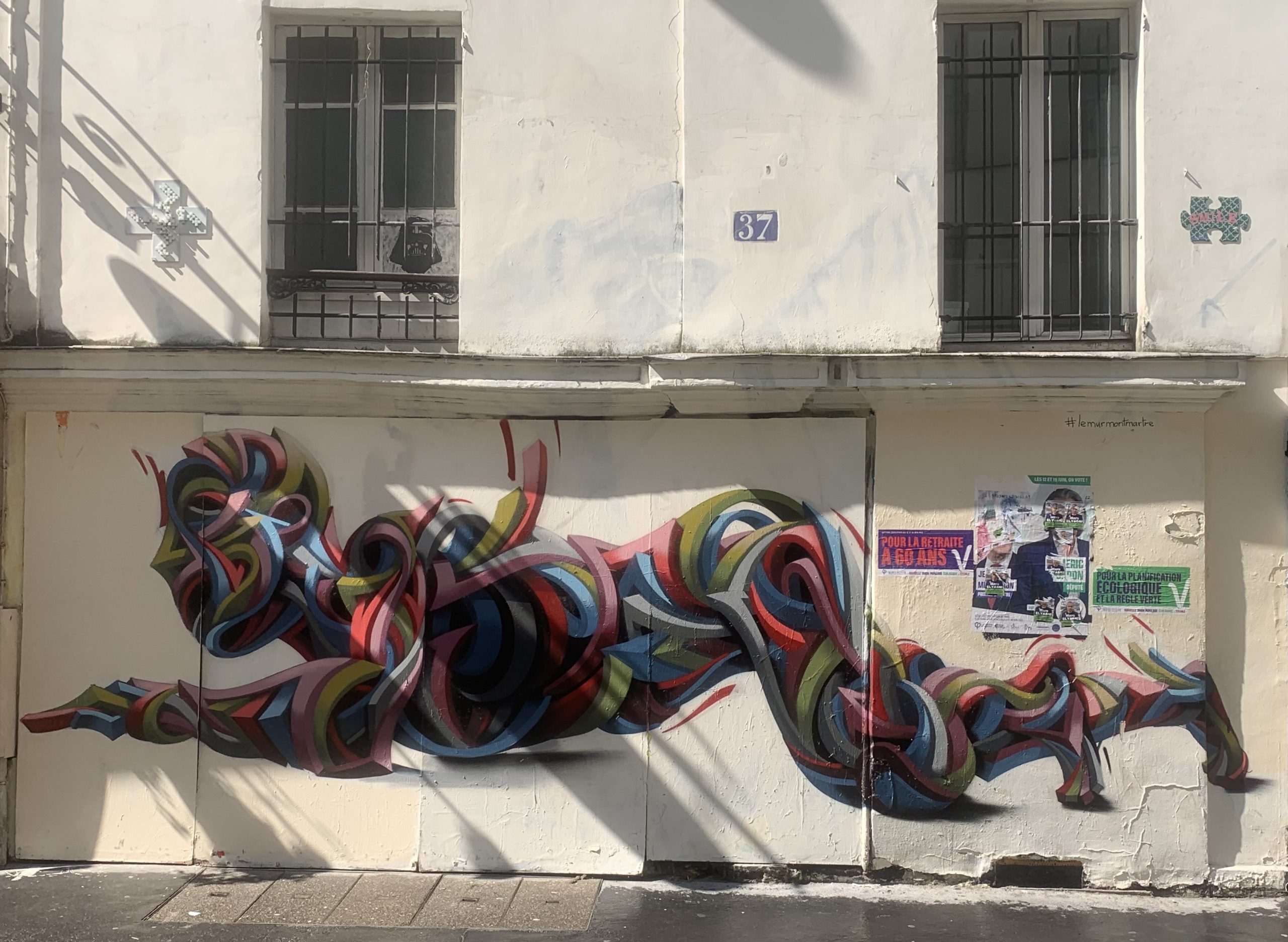 “An artist who works in the street is, for some, a vandal. But things are evolving faster in our time than in my youth.” — Jacques Villeglé

“An artist who works in the street is, for some, a vandal. But things are evolving faster in our time than in my youth,” Villeglé said in an interview with Forbes Magazine writer Y-Jean Mun-Delsalle this spring.

“I share with street artists an interest in the culture of the city. We work with motifs that the Impressionists didn’t have. I’ve spent time with them because of our mutual interest in present-day life… I have only good memories with them,” said the 96-year-old Villeglé, the last living participant in the French avant-garde movement Nouveau Réalisme, the French contemporary of America’s Pop Art.

Just two days after Villeglé passed away, Malak again took to Twitter to eulogize a lost artist calling him “master of the public space.” Like Miss Tic, she said, Villeglé “will be terribly missed by France.”

Building on a legacy of outstanding first-generation artists and this warm national embrace, Parisian street art is flourishing as a legitimate and cherished art form and an important contributor to French national culture