Sour Mouse NYC has developed a new series of art show, showcasing collaborations between up-and-coming artists with veterans in the game. The first pair of collaborators in this series is Android Oi and Josie Woods. Android Oi is known for his provocative wheatpastes, portraying the female form melded with nature and  personal poetry. Meanwhile, Josie Woods has been turning heads with her trippy scenes and intriguing line art characters. The two couldn’t be more different in style, but perhaps this is the needed recipe for Perfect Strangers.

This interview has been edited for concision & clarity.

T.K. Mills: We’ll start with you, Android. Would you mind telling me how you got into art?

Android: It’s pretty simple: just being a kid and seeing cartoons, reading comics, and wanting to imitate what I saw really. I just looked at a photo and tried to duplicate it. Looney Tunes, you know. 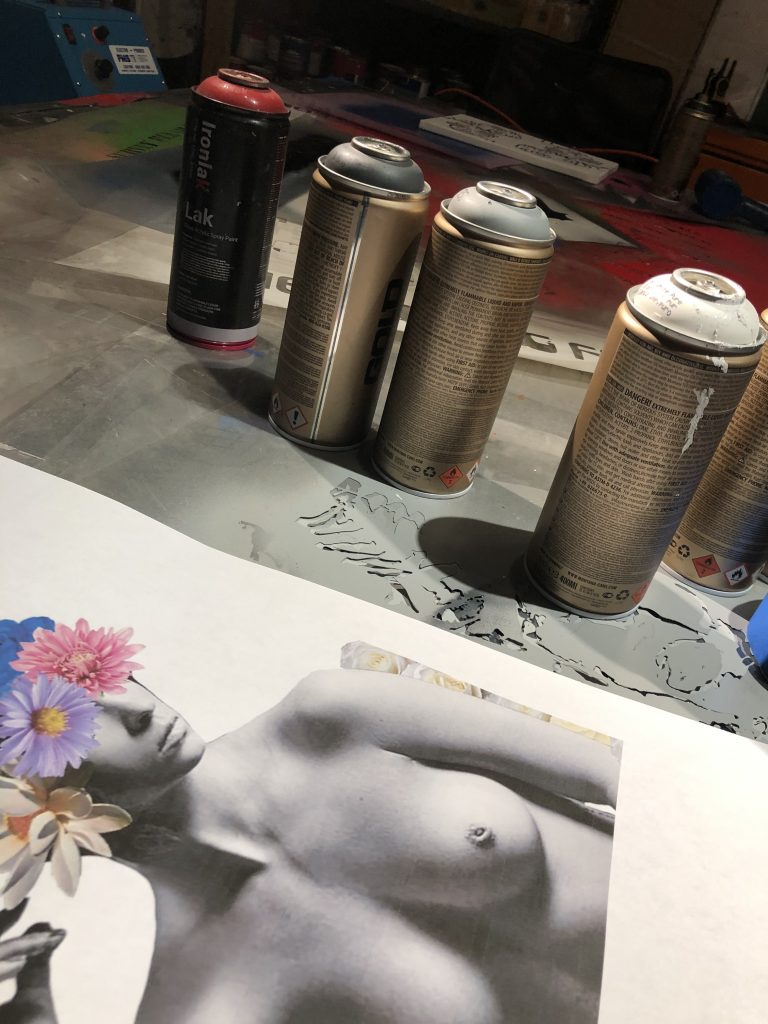 T.K. Mills: How did your style develop?

Android: Well, I mean I had the training in school and everything, but then sooner or later, the style that I’m doing now was developed and in a sense inspired by street art. I went from graffiti to stencils to just wheatpasting my canvases on the wall.

T.K. Mills: How long have you been doing art professionally?

Android: My first mural was around 15-16 years old, but professionally I’d say right after college. I did a lot of portraits for people and things like that. 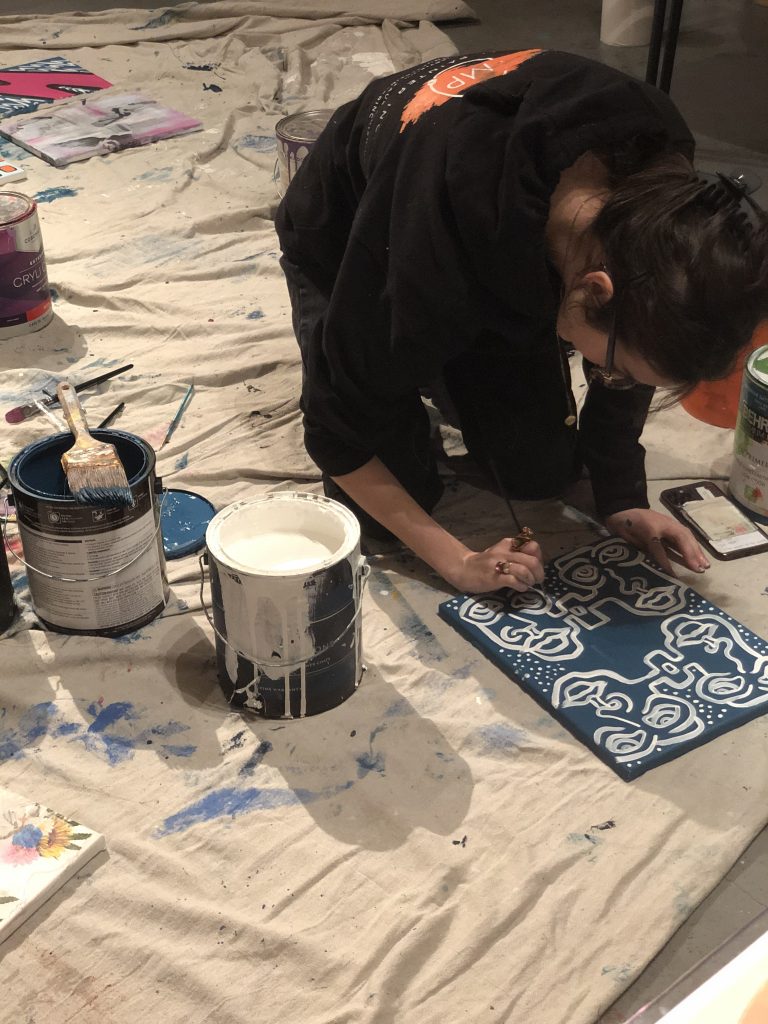 T.K. Mills: Josie, how did you first get into art?

Josie: I got into art in July of 2020 during the pandemic. Looking back, it’s such a small worry, but I was supposed to do some solo traveling during that time and it was my only outlet in life. Then I was just stuck in my room for 3 months and started seeing shit. So, I decided to paint it.

T.K. Mills: How would you describe your style and how did it come to develop?

Josie: I am still in search of finding words to describe my style, but it was developed mainly through music because I have synesthesia or chromesthesia, so it’s sound to color. I was just listening to Tiny Desk Concerts in my room and looking at the colors that they would use to just flow with it. It just came out to be this tribute mix of colors flowing together. 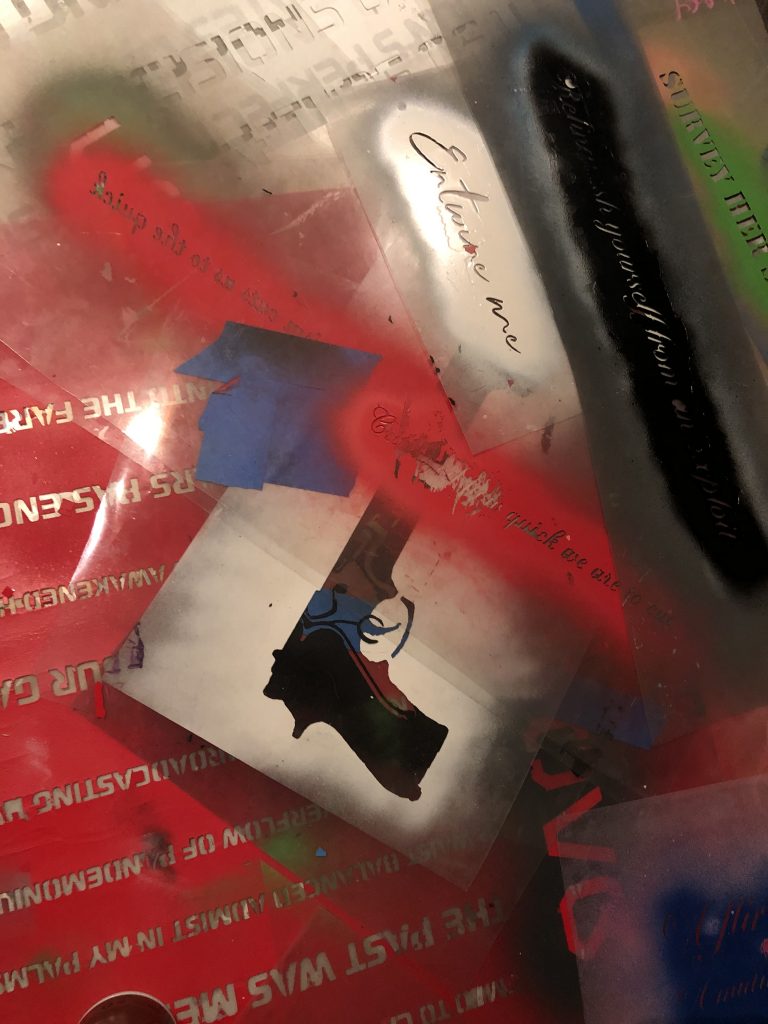 Josie: I’m still toying with that idea and playing around with what doors I can open because I didn’t even know that I could have a career in art in the first place! I’ve opened up all of these random avenues I never thought existed.

T.K. Mills: How did this show come about and where does the name “Perfect Strangers” come from?

Android: Well, the show came about through Sour Mouse coming up to us and putting it together. So when we sat down and spoke about it, Josie and I, we agreed we don’t know anything about each other; we questioned our pairing. For the most part, we have completely different styles besides the fact that we both use our words in our paintings. So, we started off just literally painting and getting to know each other. So, we think we’re perfect strangers at the moment. 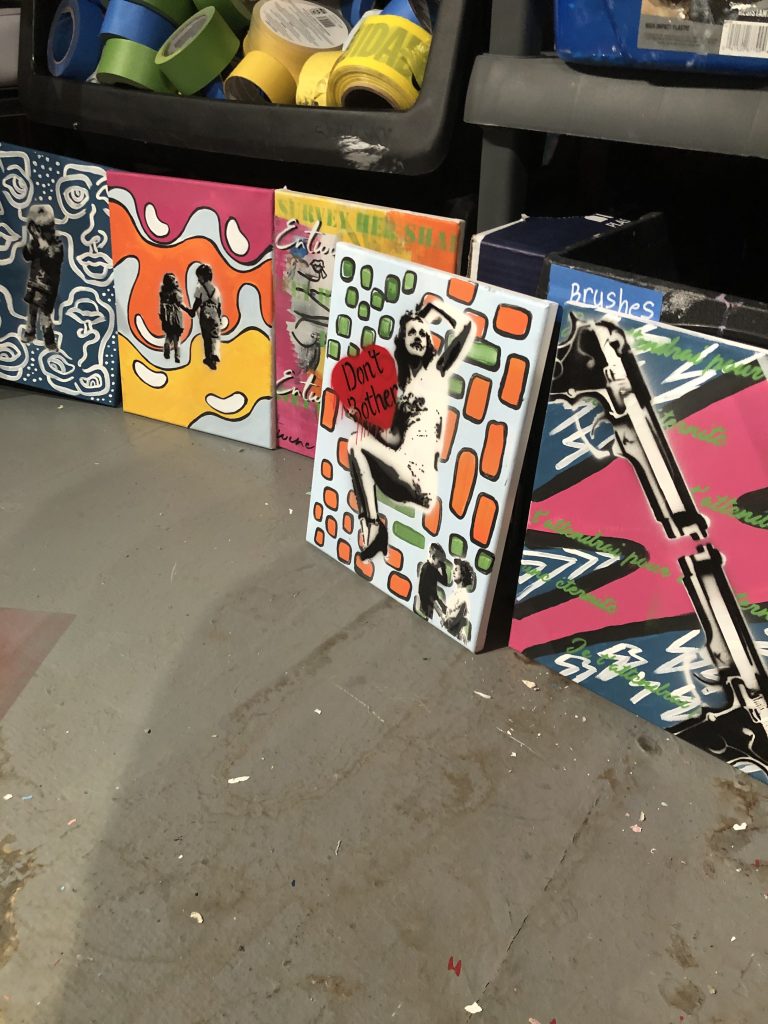 T.K. Mills: Nice. I saw the original flier that had the movie poster. Was that part of the inspiration for it?

Android: I mean, T.K., you know me. I need to have a little bit of humor. I’m gonna take the artwork seriously, but the flier could just be ridiculous and funny. So, you might actually be too young, but remember Perfect Strangers was a TV show? I used to watch it as a kid. It’s just a funny thing and it popped up in my head when thinking of names for this show. I was like “Hey, Perfect Strangers! Like us!” So, I wanted to use that as a funny ha-ha moment for people around my age.

T.K. Mills: For the show’s flier, how did the idea come about of you guys doodling on each other’s faces?

Josie: It was all Android’s doing. He did a really good job at creating a backbone for the show and leading me through the process of it because I’ve never really done a show.

Android: We’re doing a collaboration show, so I thought we should have a small collaboration showcased on the flier. I wanted little mugshots on the flier of the both of us: my face superimposed with Josie’s illustrations on top and then Josie’s face done up the way I do with my models in my artwork.

T.K. Mills: If I remember correctly, Android, you had told me that you both will be showcasing some of your solo works along with your collaborations for the show?

Android: Right now, we have about 18 smaller sized canvases that we’re both collaborating on together. It’s going to be an interesting collaboration show, but we don’t want to expose anything too revealing yet. 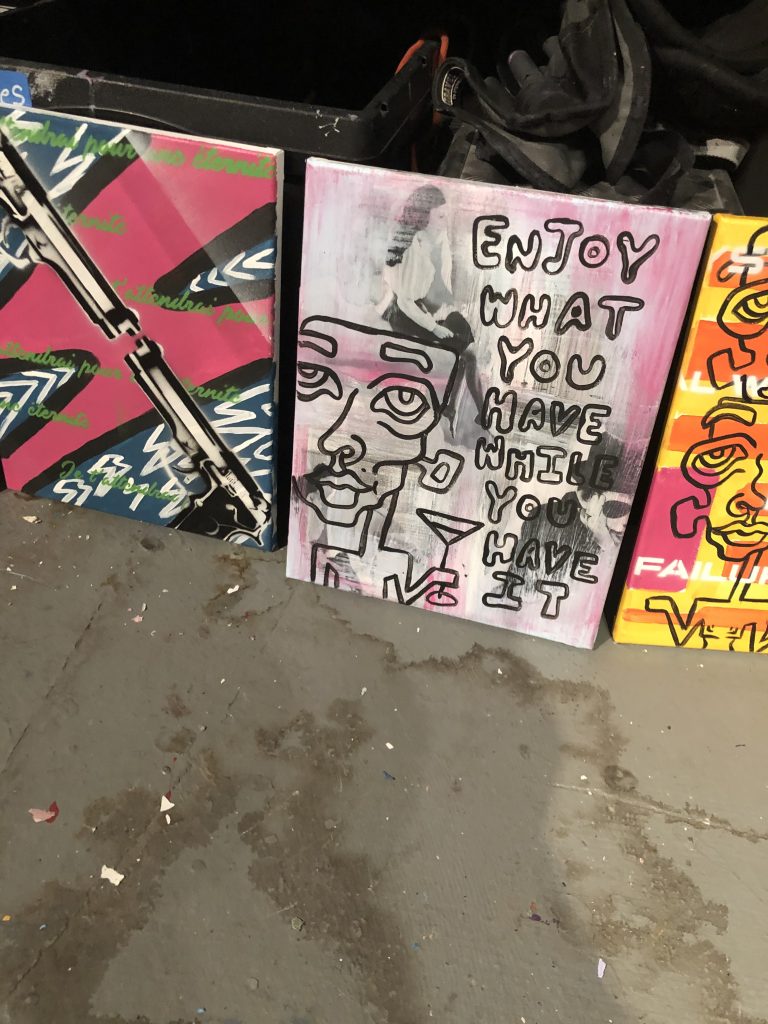 T.K. Mills: Yeah, keep it mum until the day of. Android, I know part of Evan’s thinking was to pair up a more experienced artist with an artist on the come up. How was it working in a more mentor-like capacity for this collaboration?

Android: I’m approaching this entire collaboration the same way we started working on the first canvases. Since Josie is up and coming and venturing with different styles, I just put it in her hands to let her do own thing. We were able to develop our canvases by switching off between backgrounds and layering our focal points. That way, we were able to highlight both of our work in a cohesive way. It’s been an easy flow of working together by just letting her find herself; see what works for her and see what works for me. I collaborate with some people here and there, but it’s not something I do every day. It’s always a new experience.

T.K. Mills: Josie, how is it like working with another artist who has a bit more experience under his belt?

Josie: To be able to work with Android, has been really chill. Whenever I say that to him, actually, he’s like “yeah, why would we fight it; you just gotta go with the flow”, which is a refreshing outlook to have when collaborating. I’ve done a few collaborations in the past, but Android has shown the same respect for me that I feel he would have for the people doing it for just as long as him. It’s really refreshing and it’s really cool to be a part of. 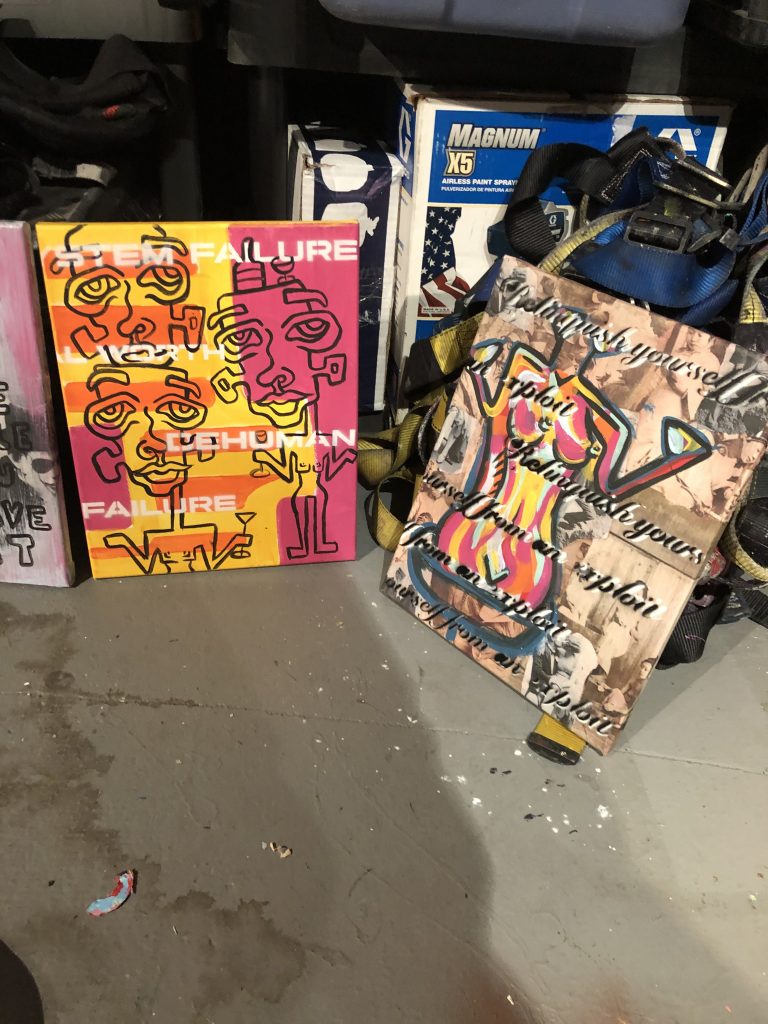 T.K. Mills: How did you guys first hear about Sour Mouse and what are your thoughts on the  venue?

Josie: I heard about it through a friend at an art show. The first time I went there wasn’t for art. It was just a random night. We got really drunk, I did karaoke, and I had the best night of my life. So, great venue, great place.

Android: For me, I think I first heard Sour Mouse for the art battles. I missed the first battle, but then I got to see the second one. I dig Sour Mouse. It’s a cool place to bring people together and look at art. It’s also cool that they have all those pool tables so you can break away from the crowd circling all the artwork if you wanted. It’s brought a lot of people together while having a chill vibe.

T.K. Mills: As we start to wrap up, is there anything you guys want people to know about  your art individually or your collabs?

Android: For the most part, people know what I do. I am venturing off and doing more technical stuff lately with charcoals and stuff like that, but as far as this collaboration, I think it’s been a good experiment.

Josie: My individual work is more than who I am or something I can produce myself. It’s just something I can tap into and I’m really, really lucky to have found an outlet this early or late in my life depending on how you want to look at it. I think it’s early. I keep saying that I’m lucky and it’s refreshing to have been chosen for this collaboration show, but you know, pairing up a young, up and coming woman with an artist about twice my age…it could have gone a weird way, working together. However, it’s just been so easy and perfect and kind of adding to the whole cohesive flow.

T.K. Mills: Is there anything you guys want to say to the people reading this as they come to your show?

Android: I look forward to people coming and I’m looking forward to the public’s critique.