Portrait of A Portrait Artist: 0H10M1ke 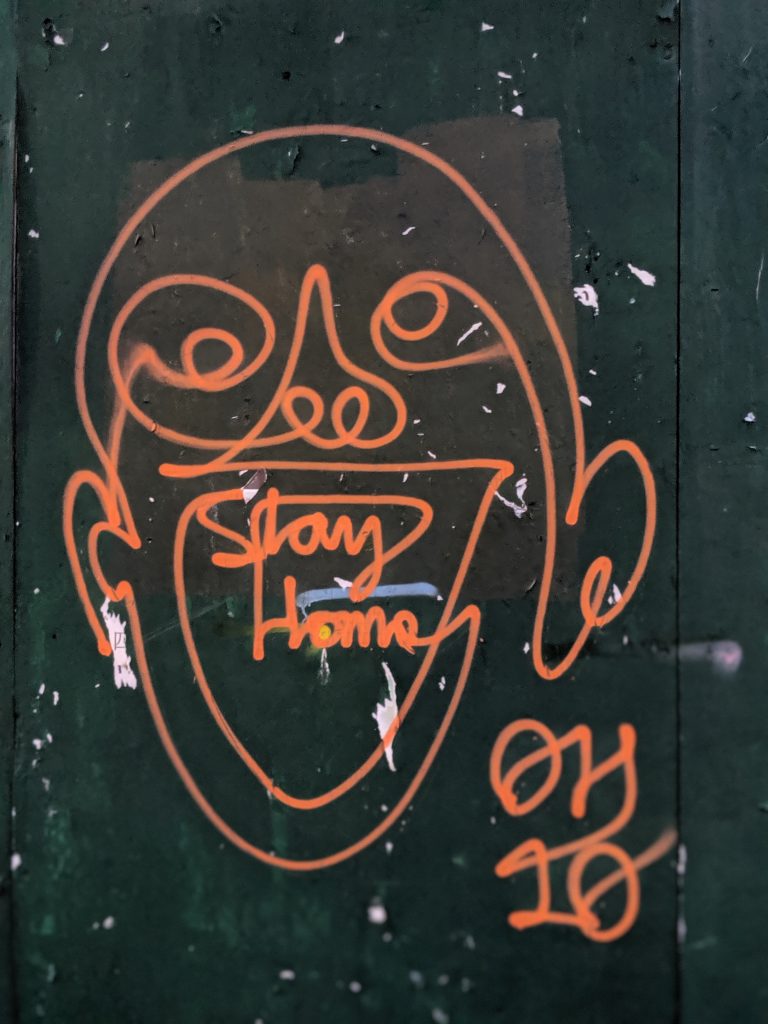 On Thursday, July 8th, 2021 0H10M1ke will be exhibiting work at 454 Broadway in Soho, New York City. This exhibit will feature 1,000 watercolors done by 0H10M1ke in his signature one-line-portrait style that has come to be an immediately recognizable phenomenon, developing for over a decade on the streets and in the galleries of Manhattan and Brooklyn. 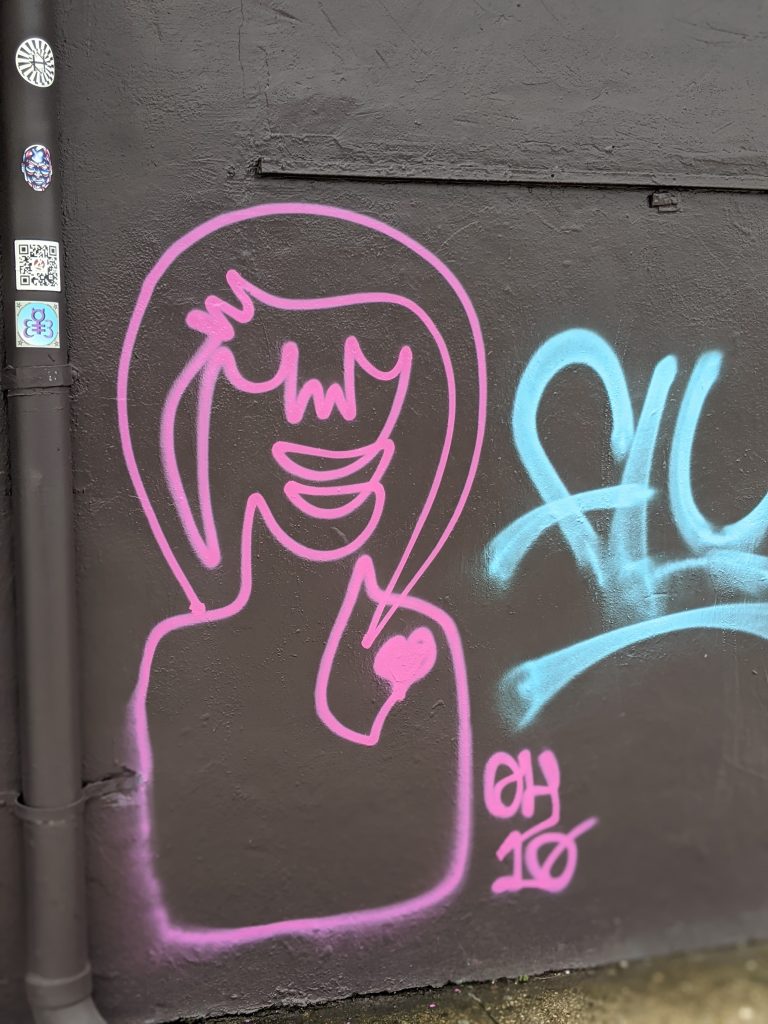 The uniqueness of his style is just that, uniqueness – no portrait is the same, and the mass quantity in which he produces them, usually multiples of ten that reach well into the hundreds and thousands, make this aspect all the more intriguing. It should be obvious at first glance that he’s a veteran of the underground art scene in New York City, since there is no one doing things quite like he is doing, and at the level he’s doing it. His drawings appear effortless, almost as if they’re manifesting themselves, going from one point to the next in a fluid motion that create clear yet distinct portraits. And they’re all of real people. 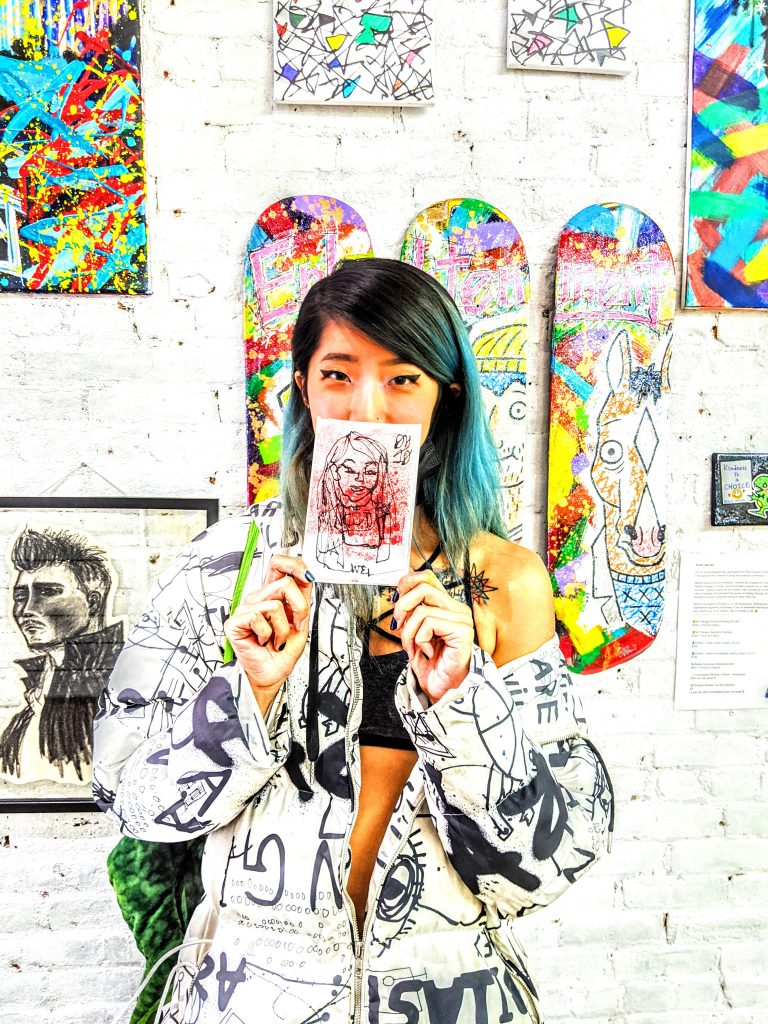 But it’s taken a long time for 0H10M1ke to get where he is. I got the opportunity to hang out with him and talk about the evolution of his work, stylistically and ethically. We began talking about the origins of his style, and he explained to me how when he started this, he was coming out of a tough period of his life. When he was learning how to draw again, he found he did a lot better without taking his pen off the page. His method of using a single line came from this epiphany, and he’s been working in this mode ever since.

His art became a form of therapy for him; he was able to resolve a lot of the tension that had been building within, rediscovering a passion for art and helping him move on to the next phase of life.

“That year, I began to draw different things, a thousand different images that were in my mind. My mind was hanging onto some of the trauma I had received and I was able to put that onto the page. That was my brain’s way of working it out. It was a way of freeing myself up and it actually healed me.” 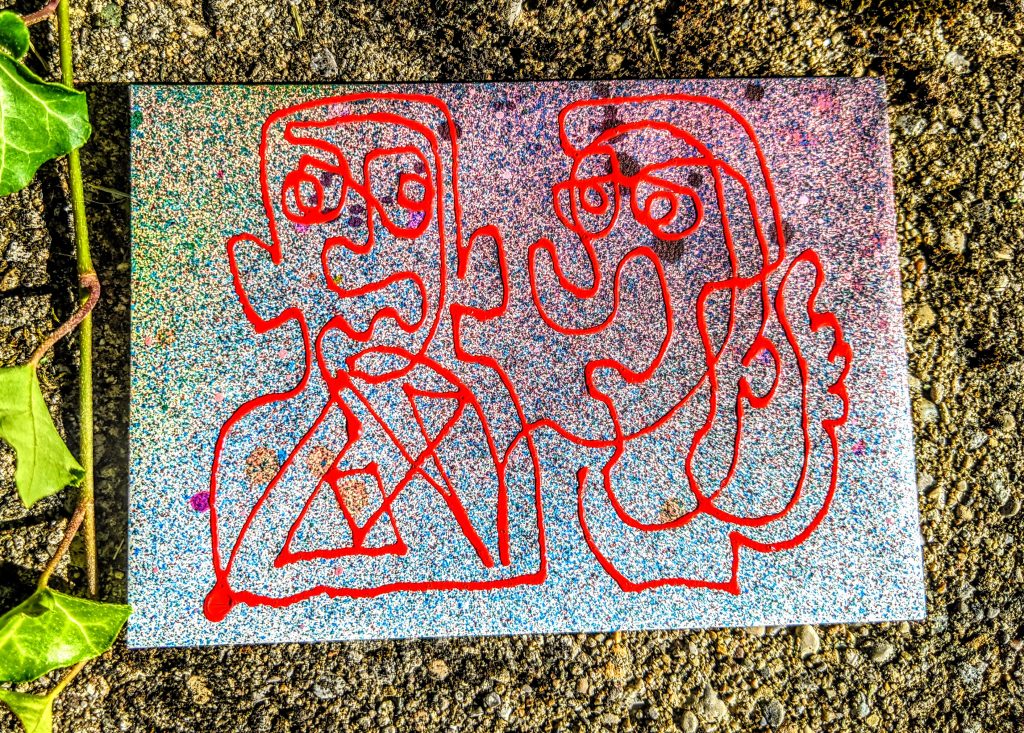 This spark in his creativity made him into a man of many endeavors. He continued:

“So then, I was able to do a show of one thousand drawings in Williamsburg at a place called Artland in 2006, which isn’t there anymore, but that was a fun effort of all my close friends coming together to sort of appreciate my coming out as an artist.”

0H10M1ke has always been a performer as well as a visual artist. He first began doing this prior to his drawings through wrestling performances, which he and his colleague have been performing in galleries for over a decade now. Then came his involvement in music. His band has also toured the world playing not just in music venues but in galleries and museums as well, not just based on the innovation of his collaborators, but his own innovation of drawing live according to the music. 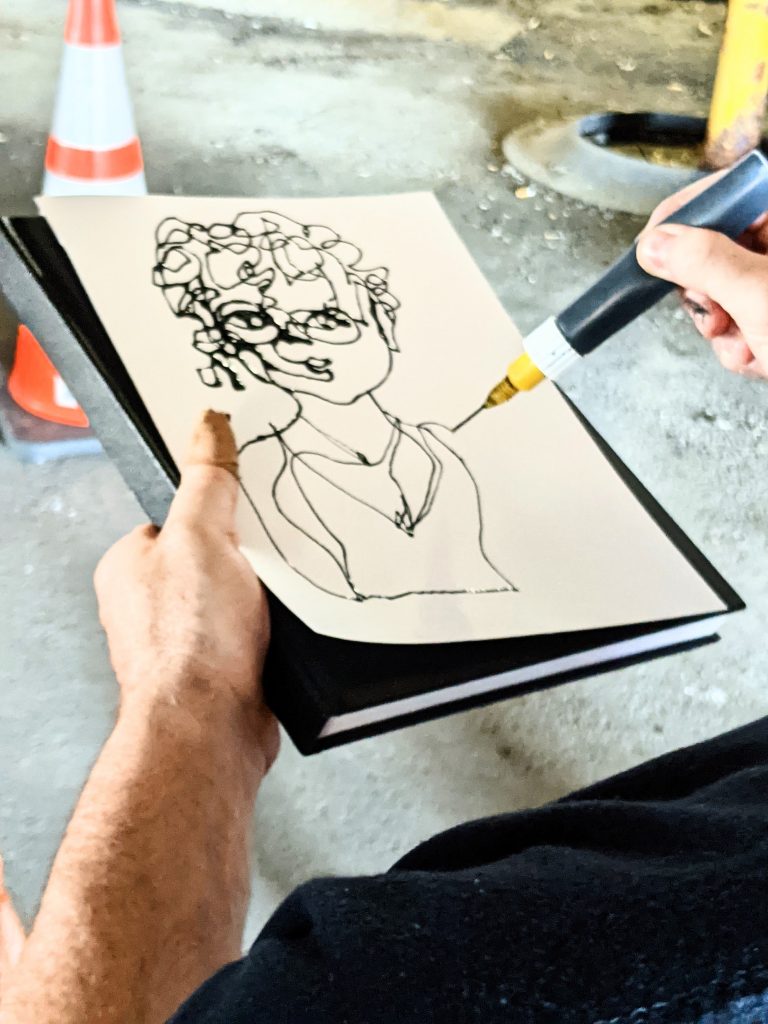 “Fast forward to the next year, I was focused on performing with my band Comandante Zero, led by Dan Freeman, and I was drawing 10,000 faces. This is when I discovered faces were my thing. So then, I started drawing these single line faces and did this project called 10,000 people. I showcased that and did this big performance with the band. I got really into drawing with the band and we were doing two shows a week for years at various bars and dives trying to figure out how we did what we did.”

This performance drawing has become a key aspect of his artistic discipline. He’s since performed around the world for a variety of audiences.

“The digital live drawing by 0H10M1ke has been seen in Berlin, Latin America, a lot in Costa Rica, as well as the Brooklyn Museum, the Rubin Museum, and the Guggenheim. I do live projections with bands and DJ’s using photoshop and my Wacom tablet. I light the space and draw on bands to the rhythm of the music.” 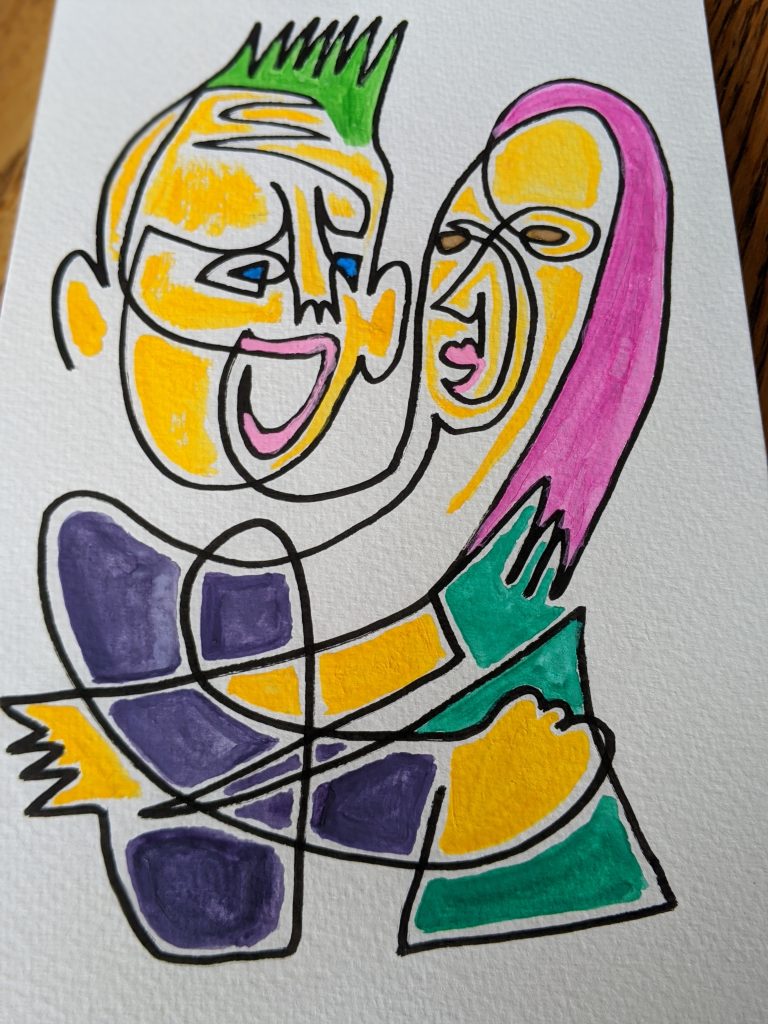 He elaborated when asked about some of the performances he’s done:

“I was actually selected to do the show at the Brooklyn Museum, because it was Keith Haring’s retrospective, and one thing he was trying to do before he died was draw to music, and the curator thought I’d be perfect for it.”

Our interview began in a park on Chrystie and Broome Street in Downtown Manhattan. It was early in the morning, before his studio space at Bowery Union was open, so he bought me a cup of coffee and we sat in the park and spoke casually while the city stirred around us. His enthusiasm for the city and for life in general was instantly apparent, exemplified perfectly by his interest in the action of the park and our conversation about coming from the Midwest to live in New York City. His environment and the people in it are what fascinates him the most, and this lust for life, this interest in the human condition, is the driving force behind his work. After all, art has always been an interactive experience for him, and whether it’s a portrait on the street or in a concert hall, he tries to reciprocate the influence his environment has on him by creating an environment for others to be a part of. 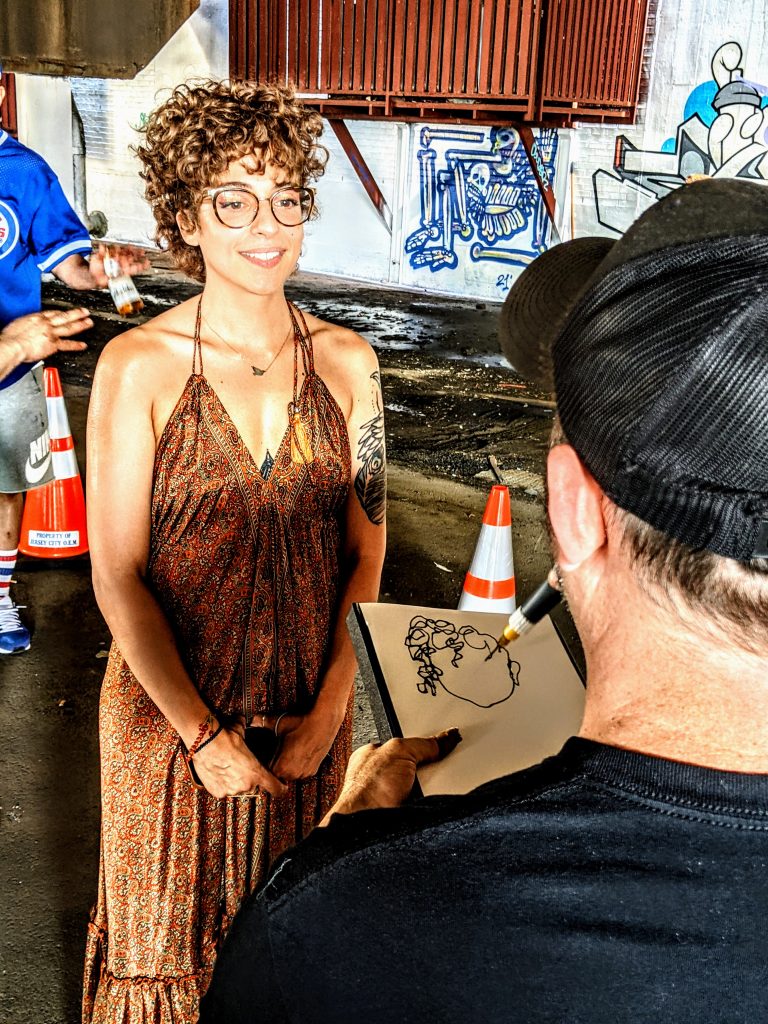 “After my 10K PPL show, I started drawing on matchbooks. I would get a 50 pack of matchbooks from the bodega, graffiti them, and bring them back to the bodega as graffiti art pieces. I was the matchbook guy,” he explained, “I started serializing them and I did like 5,000 of those. Then I started to leave them places so people could find them.” (As an aside, he explained, “I eventually drew 10,000 portraits and I’m at 13K with matchbooks.”)

A big part of street art is indeed the interactivity it has with the viewer, being a part of their environment, something to discover. While Mike was developing his own way of interacting with the people, portraiture inevitably found its way into the scheme of things. 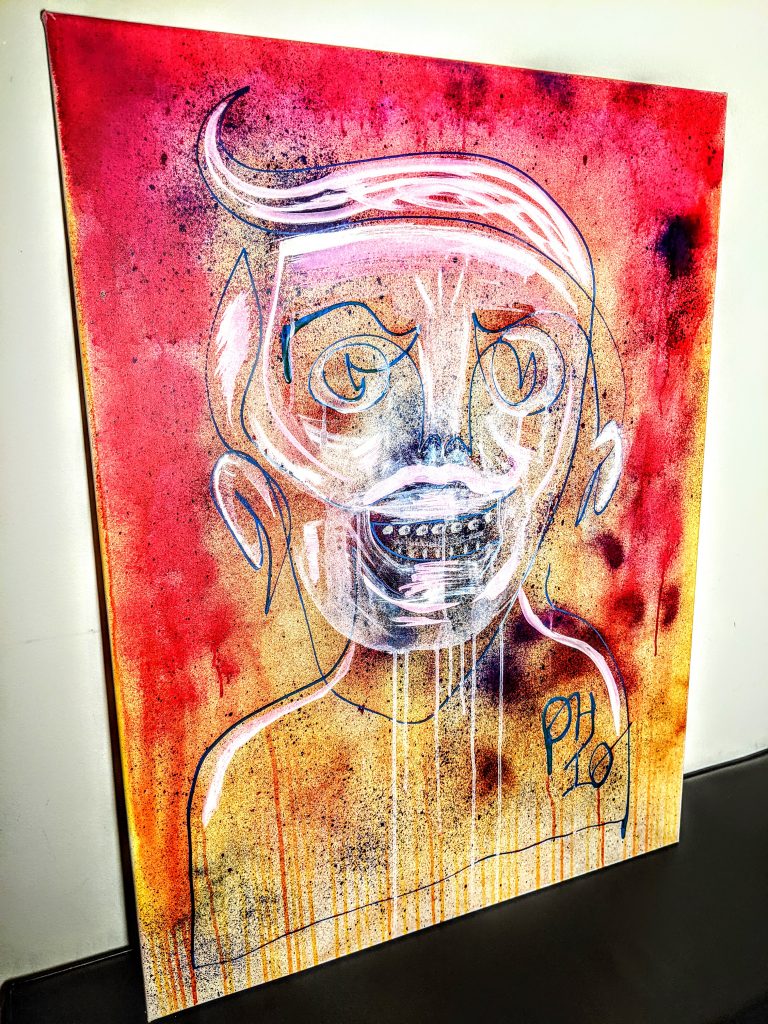 “When I was putting my graffiti on these matchbooks, someone told me I should do portraits. I wasn’t sure if I should, but I did. They were terrible at first, but I figured it out and got into the flow of it. I would go out at night and draw everyone’s portrait. I would go from 8th Avenue on the L train all the way to my stop at Lorimer, drawing everyone in the train car.”

We took some time to walk around and check out some of the pieces he’s gotten up in the neighborhood. They’re easily distinguishable, if you know where to look; hidden gems of faces residing in the static of graffiti found in most of the nooks of the Lower East side and Chinatown, his 0H10 signature not too far away. His portraits are usually based on real people he meets in the street, but he has been able to create characters over time. When he first began, he told me, the idea was to draw 10,000 people each with different line work. After the matchbooks, he began approaching people on the street and ask to do their portrait. He would draw on whatever he had at the time, a notepad, a pizza box, an envelope – and he would give these portraits to these people free of charge, a snapshot of the moment they were in that they could keep forever. 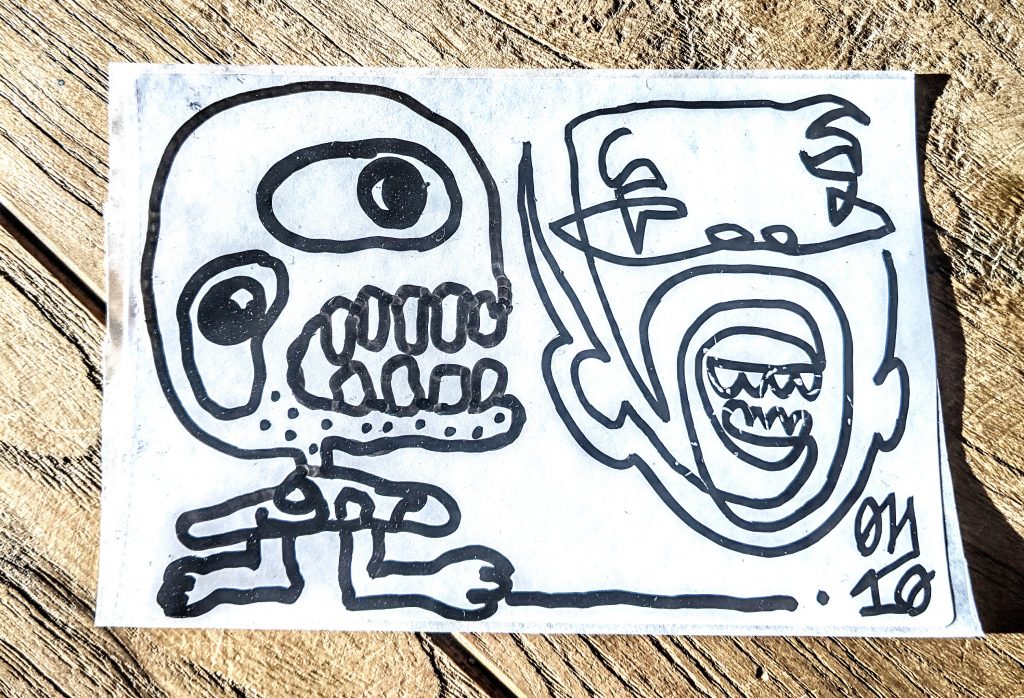 This idea of capturing people in the moment became an obsession of his; after all, faces are his thing. He was drawing constantly, always of other people on the train, on the street, in bars and cafes. He learned to do them quickly, capturing action and essence in a way that was completely organic.

When asked about the inspiration for that, he said:

“I think New York City made that happen. Every moment feels like there’s a million things going on. And I never wanted to miss a beat on that. Every moment is alive, and so capturing that is a sacred act. That’s where I deal with that.”

He continued: “I love disorientation. I find my balance when disoriented, I’m at my best when there are multiple stimuli happening all around me.” 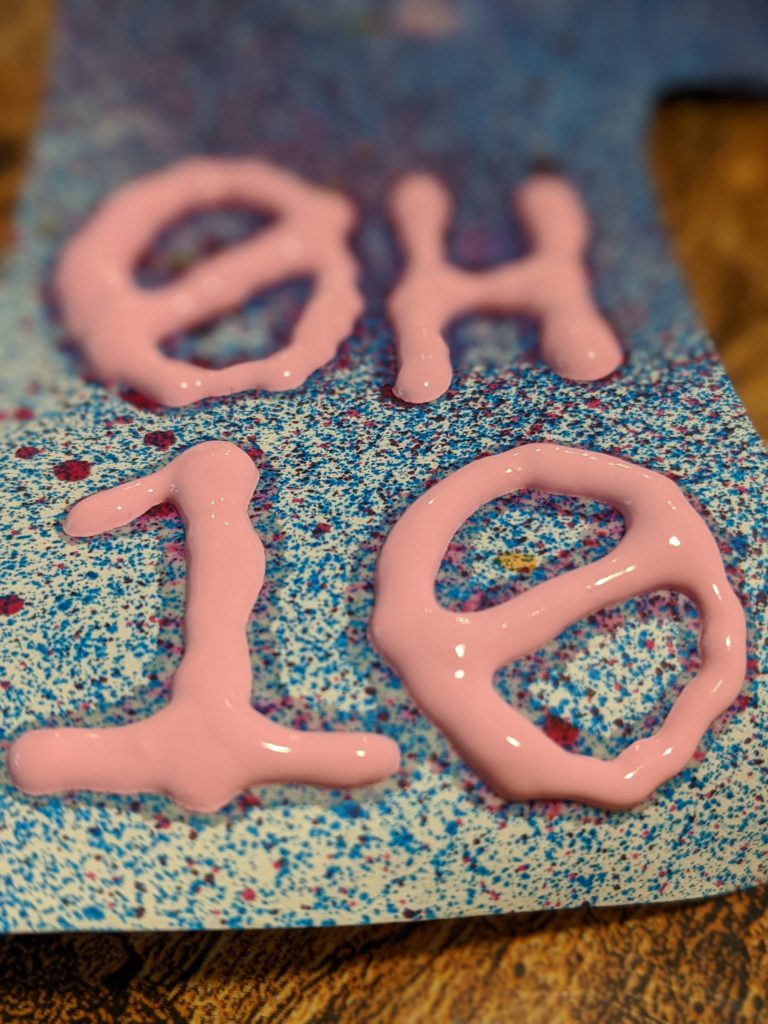 He is still consistently drawing and painting hundreds of portraits at a time, all while throwing up graffiti, showcasing in galleries, and doing live drawing events with his band. Being hyper-productive, relying on spontaneity and letting the linework do its own thing are core principles of his method.

We spoke about what he has going on presently. He has two shows up coming up; one at 454 Broadway in SoHo through New York City Arts Empire, where his one thousand water colors will be showing through the weekend. The opening will be on Thursday, July 8th from 6 to 8 p.m. The other show will take place at Bowery Union, and is titled ‘Massive Mini’ (stylized as #MASS1Vem1n1). 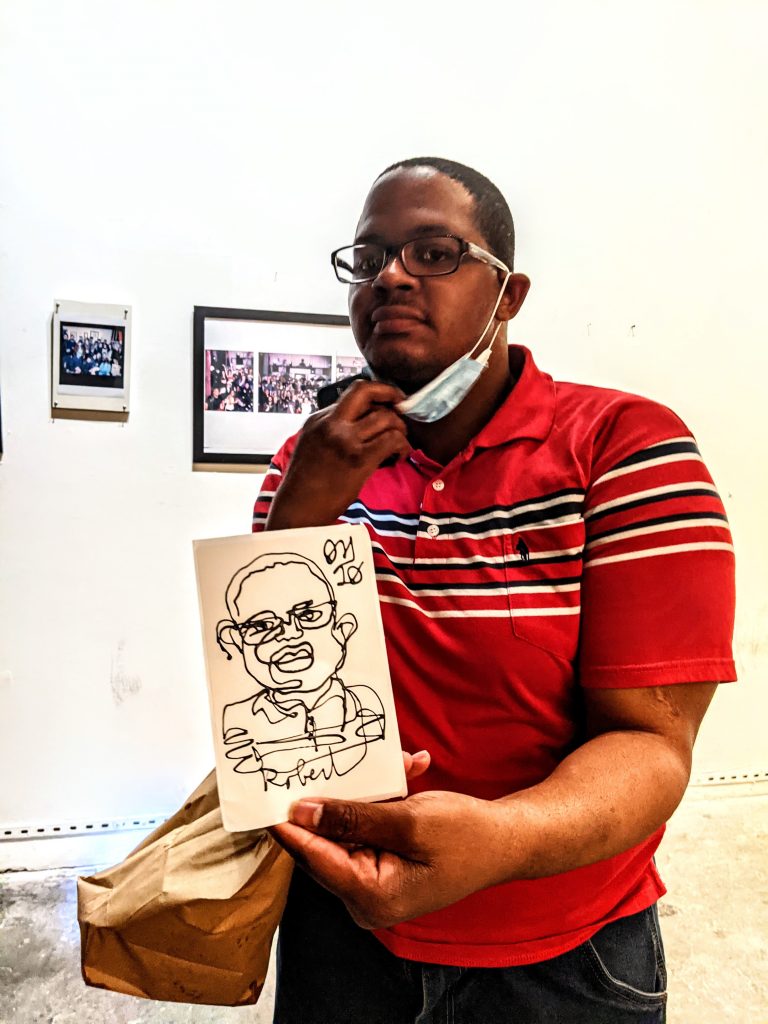 Opening on July 15th at Bowery Union, several punk bands will be playing that Friday, as well as Mike’s band from Costa Rica, which will include his live drawing, and we’ll be seeing the largest 0H10M1ke pieces we’ve seen to date. Adhered to the sixteen-foot walls of the studio, he’ll be painting one massive canvas piece, as well as wheat pasting smaller pieces around the neighborhood for a street art photography tour that Sunday. The idea behind the name is that we’ll get to see his work on a mini and massive scale, hence the name Massive Mini.

All said and done, 0H10M1ke is a performance artist. Taking inspiration from the community, and giving back to the community by involving them in his art is what he does. He takes street art a step further than simply painting art on the street, he paints the people. He paints the moment in time where they met each other, each moment in and of itself a performance, and he makes this performance as immersive and as positive as possible.