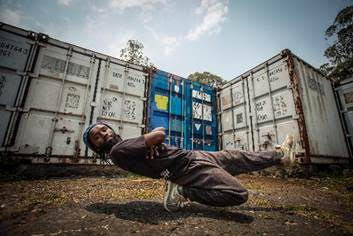 From the incomparable flow of rappers to the vitality of street art and the creativity of Bboying and Bgirling – ARTE.tv is set to celebrate hip hop culture in all its forms.

On Friday 1st October the Bboys & Bgirls Africa series launches online with a close-up look at the breakdance scene in Africa, and at midnight ARTE.tv goes live to Berlin for a special performance by Little Simz, the British-Nigerian rapper, singer and actress whose fourth studio album “Sometimes I Might Be Introvert” was released this month. The documentary Hip-Hop & Internet – It’s yours, exploring the synergies between hip-hop and technology is available from 15.10.21. In December Girlhood explores objectification and misogyny within the hip-hop scene and #idancemystory tells the story of street dance. The Hip Hop Culture season continues in 2022 with two new episodes of the Rock Legends series focusing on The Beastie Boys and Run DMC.

Up-close to the breakdance scene in Africa, from Cape Town to Casablanca and from Goma to Algiers, ARTE meets dance athletes with blatant moves and equally impressive stories.

Since the South Africans’ stellar entry into the Battle of the Year scene in 1997, and the crowning of Morocco’s Lil Zoo at the 2018 World Championships, breakdancing in Africa has continued to evolve. In this documentary the Bboys & Bgirls reveal the styles and diverse influences that have inspired them. Through their stories the struggles and aspirations of several generations of dancers are revealed – the performers who have put the African continent on the world map of breakdancing.

Hip-hop & Internet: Do it Yourself

This documentary, by Marguerite Bourgoing, seeks to measure the impact of hip-hop in the digital landscape and to understand how this unifying musical genre has revolutionised the behaviour of the music industry and the public. Filmed over ten years in the United States (mainly California) the programme features Chuck D, Curren$y, Wiz Khalifa and Lil B.

While the existence of rap was originally linked to the urgency of a social message carried by men, gradually women overcame the misogyny of the genre, took over the microphone and made it possible to change the game. Each episode is carried by the voice of two female artists: Lean Chihiro and Meryl (France); Dope St Jude and Dee Koala (South Africa); Krtasnssaa and Kthek (North Africa); Ace Tee and Ebow (Germany).

A documentary by Jean-François Tatin and Flora Desprats

Street dance is the dominant dance of international youth culture. The documentary tells the story of street dance, its social implications and popular expressions. A cinematic journey from the beginning of the 20th century, through the hotspots of the metropolises in the 70s and 80s and the pop stars of the 90s, to the stages and social media of our time.

Beastie Boys: Among the most important alternative bands of the last 30 years, the Beastie Boys are a must-see. Michael Diamond, Adam Horovitz and Adam Yauch came from an affluent background and had attended prestigious universities before forming their band in the New York hardcore punk scene of the early 1980s. This scene inspired them, shaped their musical style and created the world’s first and only rap punk rock band.

Run-DMC: Formed in 1981, this trio from Queens, New York, was the first hip-hop group to go platinum and double platinum. The Grammy Award winners were considered one of the most influential artists in the hip-hop scene, giving Run-DMC a key role in the genre’s growing popularity during the 1980s

Watch free of charge, on ARTE.tv, via the ARTE mobile app and the Smart TV app.