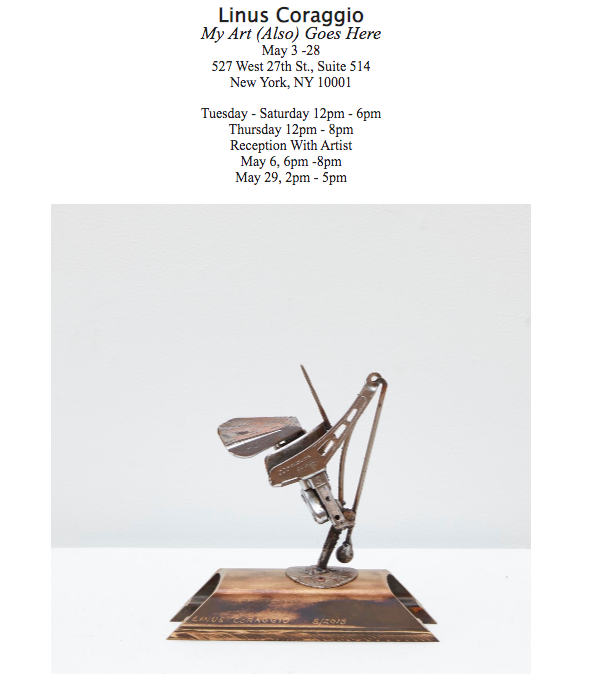 In the 70s New York’s Lower East Side was the slummy, dangerous haunt of hookers, dealers, addicts, along with bohos – artists, writers, performers – looking for cheap spaces. With the 80s though came the propulsive energy of the Neo Exes and Graffiti, along with budding galleries, clubs, hipster restaurants, vaulting rents, namely the Big Bad G of gentrification. By which time the art world had hugely changed, the world of graffiti most especially, Keith Haring, Kenny Scharf and Jean-Michel Basquiat moved their work off the wall onto canvas and paper. And Linus Coraggio took Street art into sculpture.

Coraggio, a New York City native, is best known for inventing a genre of Street Art he termed ”3-D graffiti” or “Outstillations,” These being welded, detritus constructions emblazoned with “socio-political” graffiti bolted to no-parking signposts across the United States. These are the sculptural equivalent of the spray paint subway art of the early graffiti masters who Coraggio cites as hugely inspiring. Like Louise Nevelson, Coraggio recycles material, primarily metal, found in rural areas as well as the city’s vacant lots and construction sites. One can clearly see the influence of sculptor David Smith in his balance and elegance in which hard metal appears fluid and soft–but there is a gritty street quality to Corragio’s pieces that remind the viewer of the “quirky historical Continuum of found metal” and artist’s roots. This pioneering street activity branded his work with a rasping but compositionally refined aesthetic and style that is uniquely his and in line with the great canon of American 20th century abstract sculptors like Smith, Pepper, DiSuvero, Witkin, Hunt, Calder and Rodin. Corragio also has a body of smaller gallery pieces of exceptional quality.

Although known primarily for his abstract steel sculpture, he continues to create expressionist/graffiti paintings and other divergent categories of work including mobiles, art furniture, neon art, representational sculpture, mixed- media sculptural collage and examples of classic and new 3-D graffiti. Most recently, he works in collaboration with other longtime artists of the New York downtown scene (Al Diaz, M. Henry Jones, Ken Hiratsuka, Rick Prol and Christopher Hart Chambers). Those out and about in New York sometimes get to spot two painted and “sculpturalized” art cars being driven around town you could encounter over the last 10 years or a vintage 3-D graffiti piece “outstalled’’ forty years ago.

Linus is also a founder of the Rivington School, a seminal artists group which from 1986 to 1998, squatted three city-owned lots on the lower east side and put together massive scrap metal sculpture gardens. The school was the progenitor of the infamous Space 2B, AKA gas station, art space. Such inventive urban sculptures generated commissions that Coraggio completed in Japan, Holland, Finland and Austria. Various films are in the works about his participation in the zeitgeist of the East Village Art Scene, including the forthcoming feature The Crooked Edge slated for Netflix release. He received the Acker Award in 2019 and was honored with a 1-Man show at Howl Gallery the same year.

A self-confessed “odd kid,” Coraggio was always drawing and making things. One entire summer was spent building a 36-inch-high pyramid of 15,000 toothpicks carefully glued into a giant configuration. When finished, he asked his mother what to call such an object. She replied “sculpture.’’ The die was cast. The son of Pulitzer Prize winning avant-garde composer Henry Brant, with whom he often collaborated, Coraggio grew up accompanying his mother Pat on her trips across the rust belt as she photographed abandoned industrial sites for her Village Voice column. This experience informed his later choice of “used” metal as his medium when he discovered welding at SUNY Purchase.