PAINT THE TOWN PODCAST: A DECADE IN THE MAKING

When James Shen and Teachr met ten years ago they had no idea that one day they would create a podcast featuring famous street artists from around the world. Shen and Teachr are the hosts of Paint The Town Podcast (PTTP) a weekly Los Angeles–based production. The improbable duo came together through various meanderings around the LA street art scene. At the time, Shen was working as a Pharmaceutical Rep in Hollywood by day and moonlighting as a DJ. Teachr is the unlikely product of a Christian family that built military weaponry who nonetheless encouraged his foray into the arts. had just begun to enter the street scene. It was around 2010, when their paths crossed and the two formed an instantaneous connection. 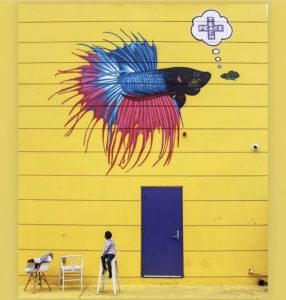 At that moment, street art was booming. “Exit Through the Gift Shop” had just come out and everyone was hitting up walls, trying to make a name for themselves. The popularity surged to the point those unaffiliated with the scene were trying to take street art off the walls and bring it home, in case one day it was worth big bucks. Shen’s pharmaceutical work had him cruising up and down the streets of Los Angeles delivering drugs to doctors.

“You got to understand this is a very secretive community.” Teachr said, “It literally took us about 10 years to build the trust and clout to be able to invite these artists to come in and sit with us.”

As he passed through Hollywood, he noticed the corner of Melrose and Fairfax was the hub of LA street art activity at that time. Shen took notice of the changing artwork and began to photograph and post the work on Facebook. However, this was before Instagram became the de facto platform of street art, and reliable information on the medium wasn’t widely available. Learning about street art was difficult, as the openness that now exists wasn’t there. Street artists, by nature, are highly skeptical and elusive animals, earning the trust of the community was not an easy feat. “You got to understand this is a very secretive community.” Teachr said, “It literally took us about 10 years to build the trust and clout to be able to invite these artists to come in and sit with us.” 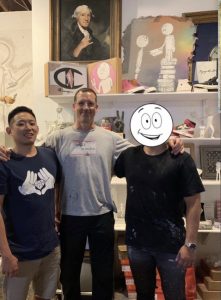 Before PTTP ever came into existence, there had been similar efforts to document the LA street scene. Shen’s friend Greg Linton managed the blog Melrose and Fairfax, a site that documented the ever–changing art facades in the area. When Linton was ready to step down, Shen stepped in and created the L.A. Street Art Gallery, an online resource for street artists in the Los Angeles area. “We want to just have a community of the artists where the artists felt comfortable interacting with each other and ten years later, that’s what we have now,” he explained.

“We want to just have a community of the artists where the artists felt comfortable interacting with each other and ten years later, that’s what we have now,”

Teachr got into the graffiti game through a much more a direct route. One day he was incensed by a local article about the education system. He decided the best way to have his voice be heard would be to create and share art. “I thought that because of what I was putting up in the street, guys would be nice to me, people would understand, you know? But other graffiti artists would come after me. And mainly because I did stencils and I showed people how to do them,” Teachr said recalling his entrance into the foray. Some artists consider skills and materials to have a hierarchy. Stencil making is considered by some to be the street art equivalent of mime to professional theater. “To them stencil making is cheating,” he said, “so it took me a long time to gain respect.” 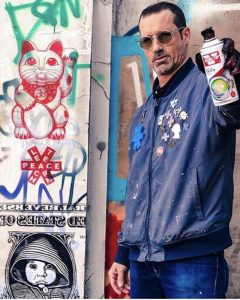 In the years since, the two have come a long way now hosts well a multitude of creatives and well-respected artists such as Morley, WRDSMTH, rock legend turned artist Dave Navarro, and even UP’s own T.K. Mills. As they’ve grown, the two intend to open up the forum to a wider range of artists in the future, including photographers, musicians, and others who have their own experiences with street art. “We don’t want to limit ourselves at this point,” Teachr clarified. 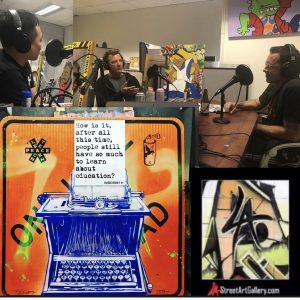 No subject is off the table at PTTP. The conversations are winding streams of consciousness encompassing anything from art and music to personal tragedy to MMA fighting. “We want people to be have a fly on the wall experience. There’s not a lot of information about these graffiti artists and street artists in general, besides their images. So, we’re basically the only place that can provide that,” Shen said. 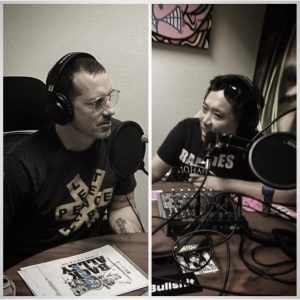 Shen and Teachr never have trouble finding things to talk about. “I lost track of time,” Teachr says recounting the first podcast they ever recorded. “I think like maybe fifteen or 20 minutes later. He’s like, ‘okay, that’s an hour.’ I was like, ‘whoa, there’s a good dynamic there.’” PTTP is now 70 plus episodes deep with no signs of slowing in sight. The podcast has been unhindered by quarantine, as they continue to interview artists via Zoom conferences.

“Once you get turned on to street art, you can’t stop seeing it.”

PTTP has allowed Shen and Teachr to expand their LA–based connections into a global network of street art. “We have people listening from all over the world and one of the things about street art is that it’s a global industry,” Shen explained. “Once you get turned on to street art, you can’t stop seeing it.” 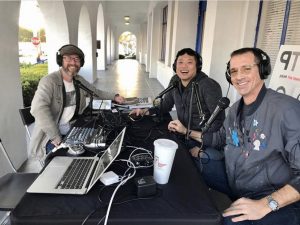 The two have big ambitions for the future of PTTP. “We’re gonna try to travel and take it on the road more. And we want to work with more international artists,” Teachr told me. The show will explore new areas and artists, visiting their studios and hopefully even hitting the streets with them afterward. “As the podcast grows, it’s gonna be like Anthony Bourdain, but with street art.”

“Street art and partying is all underground culture and there’s a whole underground scene that I think a lot of people would love to know more about,”

They also plan to showcase the underground scene related to street art, ogfering followers a first-hand look at a party life that not everyone is privileged enough to access. “Street art and partying is all underground culture and there’s a whole underground scene that I think a lot of people would love to know more about,” Shen said. “We don’t take ourselves too seriously,” Teacher said with a laugh. 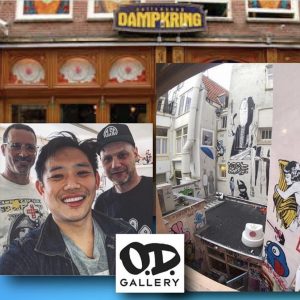 Since the inception of PTTP, street art has gone through a multitude of changes. Shen and Teachr have seen artists rise and fall. Some have joined galleries and turned their back on the streets, some have dabbled in galleries before returning to their street roots, some disappear without a whimper, and others become mainstays. Yet James insists that the Paint the Town Podcast will continue to document the constantly evolving street art scene without judgment. “We want to document all of that. We want to show people what it is like to be in our community. Our podcast really is about showcasing that if you’re a street artist, if you’re inside following LA Street Gallery, that’s there’s a community for you and we’re gonna support each other.”

Brian Bloss is an artist, photographer, and writer currently residing in Los Angeles.