Usually when people think of public art, they imagine statues of war generals or other long-ago historic sculptures. Public art is so much more than that—it is an integral part of the urban landscape. In the last few decades, cities have been investing in artists to create new landmarks, particularly in New York. Public art helps bring together communities, becoming a meeting point and a place of interest. It can be found in both rich and poor neighborhoods, open for anyone and everyone to appreciate. In this series, modern and contemporary pieces of public art will be highlighted so readers can explore the works that help create New York’s identity.

The SoHo neighborhood in New York City hosts a few exciting pieces of public art. While SoHo usually sparks ideas of luxury goods and shopping, originally the neighborhood was defined by artists and bohemians living in inexpensive loft spaces, who created a wide body of work. In the 1970’s, it’s estimated that there were more than 2,000 artists living in the lofts, including the likes of Andy Warhol, Jean-Michel Basquiat, David Bowie, and Donald Judd. The artists who lived here 50 years ago paved the way for the neighborhood to become what it is today: a beautiful landscape of perfectly preserved cast-iron. (Artists played a key role in preventing the development of the proposed ‘Lower Manhattan Expressway,’ but that’s a story for another day.)

While SoHo usually sparks ideas of luxury goods and shopping, originally the neighborhood was defined by artists and bohemians living in inexpensive loft spaces, who created a wide body of work.

Tony Goldman, the CEO and visionary founder of Goldman Properties, was one of the most important figures to develop the SoHo landscape. He purchased 18 buildings on Greene Street in 1977 when the area was still covered in trash and suffering from ‘urban decay.’ Goldman revitalized the newly-purchased buildings with renovations, although the artists had already moved in a decade earlier. In 1979, Goldman opened two restaurants to attract a new, younger crowd: the Green Street Cafe, the first supper club since the 1950’s, and the Soho Kitchen and Bar, a hip wine bar. 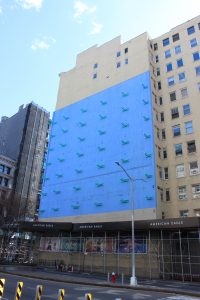 In the 1970’s, Soho was full of artists, performing spaces, studios, and factories, but there were limited living spaces. Goldman envisioned the loft-style living and predicted the future of the neighborhood. After Goldman’s properties opened, SoHo became alive with shops, eateries, bars, and tenants. Goldman’s foresight paid off as SoHo came to fruition. Goldman did more than just  invest in properties, he helped revitalize the neighborhood by commissioning art for one of his Greene Street buildings.

Goldman envisioned the loft-style living and predicted the future of the neighborhood.

Today, we can see that artwork in front of 110 Greene Street, titled ‘Floating on a New York Sidewalk.’ This piece was originally created in 1986, but went through some restoration in 2006. The Belgian artist, Francoise Schien, created a 90 feet long and 12 feet wide subway map of Manhattan made of stainless steel bars, terrazzo flooring, and glass rounds with lights embedded into the ground. There are 156 ‘stops’ on the map each made with hand blown glass.

This was one of Schein’s first major works as an artist; she was only 27 at the time. Back then, Goldman said the artwork would be “as if you entered a computer.” In the 1980’s, the concept was considered pretty avant-garde and bold with Goldman supporting young artist’s radical idea of having a map on the surface of the city. This unique friendship between artist and real estate developer, blossomed into a landmark work of art that is still enjoyed today. 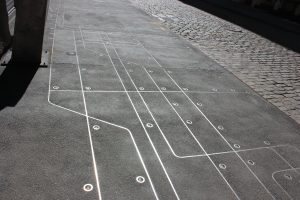 In 2006, the entire installation was torn up and the concept was completed with a new integrated fiber optic lighting system. Prior to this, the artwork did not include the recessed lights that were originally intended for the piece. In the 1980’s, no one would think to use the sidewalk as an art feature, but now it’s common ground for street and public art. Floating on a New York Sidewalk has since been designated as an official New York landmark.

SoHo has another sidewalk based artwork: Ken Hiratsuka’s carving. Located on the corner of Prince Street and Broadway, Hiratsuka said he just wanted people to stop their busy lives for a moment and be inspired. Originally from Japan, Hiratsuka moved to New York City in 1982 at 23 years old. He became a prominent figure in the 1980’s street art movement by carving his designs in granite and slate throughout the city.

Located on the corner of Prince Street and Broadway, Hiratsuka said he just wanted people to stop their busy lives for a moment and be inspired.

A piece carved in 1983-84 was one of his first works in New York and became his signature style for years to come. Since Hiratsuka was afraid of deportation, he only worked on the piece at night and with a lookout. The sidewalk carving itself only took about five hours total, but he completed it over the course of two years. Early on, he was caught by a policeman mid-carving. Ken said, “I got chicken, so scared… I can’t go back, I can’t carve anymore. But two months later, I was ready again.” You can find other Hiratsuka sidewalk carvings throughout sidewalks and one of his sculptures is in front of Schein’s subway map. 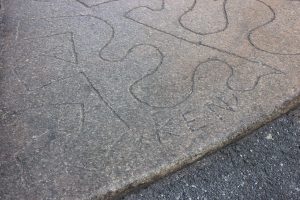 ‘The Wall’ aka ‘The Gateway to SoHo’ by Forrest Myers is located at 599 Broadway. Created in 1973, this artwork takes up almost eight stories on the side of the building. The Wall was built under commission of City Walls, Inc., a not-for-profit that encouraged public art to revitalize the city. The owner of 599 Broadway supposedly wanted to cover the architectural defects where it was previously connected to an adjoining building.

The work itself is a minimalist sculpture consisting of 42 turquoise green painted aluminum beams, bolted to braces and spaced evenly on a blue background. In 1997, the owner of the property complained it was causing leaks to the building, but it soon became apparent why the owner wanted it removed: the space was a prime location to make money on advertising. In 2002, the Landmarks Preservation Commission reluctantly allowed the work to be removed, with a stipulation that it must be put back once repairs were made.

In 1997, the owner of the property complained it was causing leaks to the building, but it soon became apparent why the owner wanted it removed: the space was a prime location to make money on advertising.

It remained in storage until 2007, when the city sued the owner of the building to re-install the work. After some compromise, The Wall was moved up  by 18-feet to accommodate for some small billboards. “This landlord [who] was initially opposed to maintaining the piece became, in the end, very supportive and has agreed to maintain its integrity in perpetuity,” Myers said. The work remains on display and is still thought of by many as The Gateway to SoHo.

These three works are just a small sample of the public art to be found around New York. As landmarks of time and place, they serve as important cultural threads that weave together the fabric of SoHo, connecting the past, present and future.