A new kind of convention is coming to New York City: Creatives Con. Debuting Saturday December 10th in the Flatiron District of Manhattan, Creatives Con is a gathering of its namesake; artists, designers, graphic novelists, and more (including a certain street art magazine.) Speaking with RedGuardian, the founder and organizer of the project, I learned how the concept for CreativesCon came to be.

Angel ‘RedGuardian’ Martinez is a Bronx-based graphic designer whose been in the game for over twenty-five years. In explaining the origin of his moniker, he told me, “I’ve been a freelance designer for years. RedGuardian started around 1999 – that’s when I bought the URL… Red is my color. It’s the element that I’m most attracted to. It’s the color of danger and risk.” Continuing, he elaborated, “Guardian – that’s my business. You know, if I worked with you, I’d guard your IP with my life. That’s how I grew. It was all word of mouth and learning from mentors.”

“Red is my color. It’s the element that I’m most attracted to. It’s the color of danger and risk.” Continuing, he elaborated, “Guardian – that’s my business. You know, if I worked with you, I’d guard your IP with my life. That’s how I grew. It was all word of mouth and learning from mentors.”

Over the years, Red built a strong reputation and network for himself, taking on clients across the spectrum – from working on websites, to the music industry, to clothing, and more. From there, “Red Guardian just flourished… I take a very organic mentality to my work.” In time he incorporated more of his personal work into the brand, bringing in elements of graffiti, sculpting, and designer toys as he experimented with his own characters. Through this, he grew closer to the creative community, meeting artists of different stripes and finding ways to create and collaborate.

One avenue that proved particular fruitful was ‘customs’ – a form of designer toy, where the sculptor makes the base form and then shares it with other artists, allowing them to put their own style and spark into it. Creating customs has been a focus on Red’s work since around 2016, a period in which he continued to build his bona-fides with the community. This led to the development of his most recent creative endeavor – trading cards.

“People loved whatever I made. There was a moment where while working on a bunch of things, I saw a card, a trading card that I made when I was ten, eleven years old… I was going through a bunch of old stuff, and when I saw the card, I was like, “Holy shit, this is pretty cool. So, I was like, let me start a bunch of cards with my own characters and see what happens. I built about twenty cards, I was drawing them, illustrating the back, and doing all kinds of fun stuff and then I realized, ‘wait a minute, I know a lot of people in this industry.’ I thought, let me build on this vision. So, I wrote a whole program. I called it The Creatives, because well, that’s what we are. 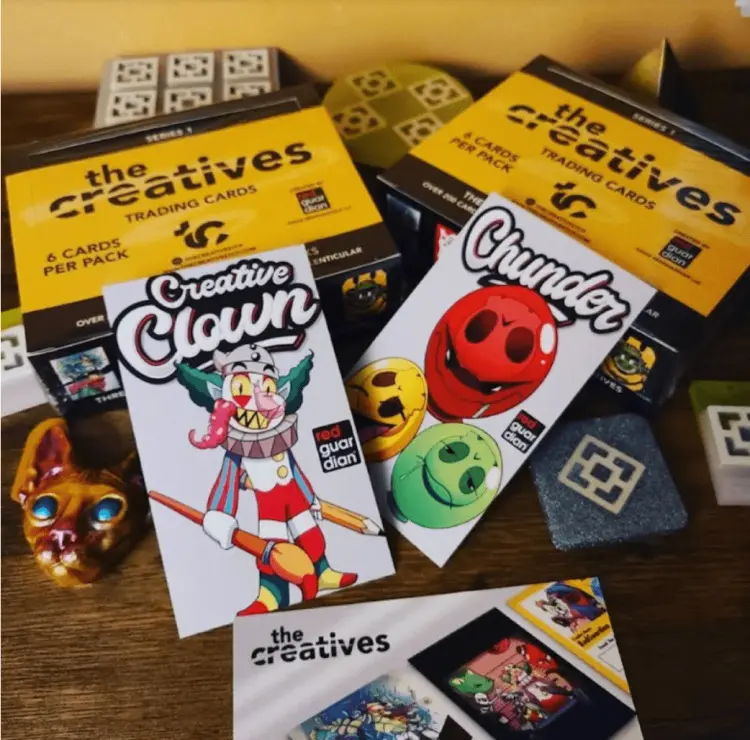 The concept continued to develop as Red recruited others to join. “I wanted it to be all creatives, not just illustrators. Whether you’re a cook, or a musician – it doesn’t matter what your focus is, you’re a creative,” he explained. He told the growing roster to just send him the work, and Red would handle the rest. “People took to it differently, some people did it on canvas – City Kitty did his on crepe paper. And I just put it all together.”

Despite his decades of experience, Red faced the challenges of inaugurating a whole new brand. In particular, funding the project. He talked with industry stakeholders, (including a major company that produces sports trading cards,) who encouraged Red to continue with it. “They were like, ‘listen, Red, you got something here. This is something interesting. No one’s done this before.’” After having mixed success with a Kickstarter, he was faced with the choice to either refund people or find another way. Like his namesake color, Red was ready to risk it all, and he decided to go all in, investing all his savings from other projects into the Creatives. 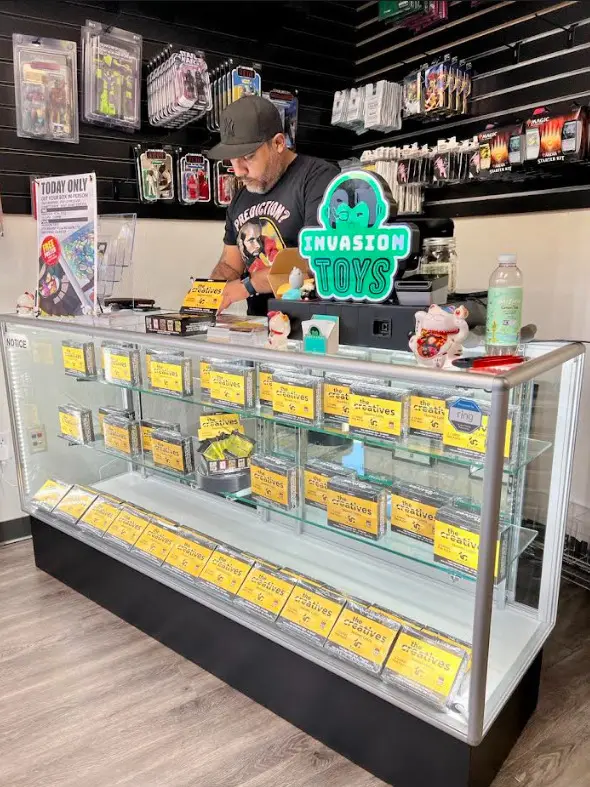 The Creatives: Trading Card Project (TCP) launched in 2021 with the website thecreativestcp.com. The first set of cards, Series 1, featured 58 artists, with each artist having designed 3 cards each. Within each set of 3, one card is a special foil, similar to shiny cards. During our interview, Red proudly displayed a binder of cards, neatly stacked in rows across laminated sheets. I noted how it reminded me of when I used to collect Pokémon cards, to which Red noted that was one of his inspirations, in building collectible sets of cards. The back of each card has a signature space, as a way to encourage collectors to pursue the artists and have them sign cards, as a way to build their collection and create trading opportunities.

Remembering the experience, Red recalled, “I just put it out there and closed my eyes and hoped for the best.”

Gradually, then suddenly, the project took off. Unboxing videos of Series 1 went viral. People were buying boxes of cards left and right. The Creatives swept like a wave, as hype among collectors continued to grow. Red joked, “it’s like crack, it just takes one pack and then you’re hooked.” The project also helped build social connections in the wake of the pandemic’s isolation. By offering the signature space, the cards encouraged real life social connection over Instagram follows. “You’ve got collectors hunting artist’s tags, like they’re Pokémon.’ Red said with a smile.

The success of The Creatives TCP is what laid the groundwork for Creatives Con. To support the release of Series 1, Red hosted a pop-up in in San Diego. He encouraged participating artists to come by, so collectors could collect tags.

The success of The Creatives TCP is what laid the groundwork for Creatives Con. To support the release of Series 1, Red hosted a pop-up in in San Diego. He encouraged participating artists to come by, so collectors could collect tags. The show was a hit, with a massive crowd, with east coast collectors asking when he would do a show back home in New York. Thinking on his own experiences setting up pop-ups and working at other conventions like Designer Con, Red got the idea to set up his own. 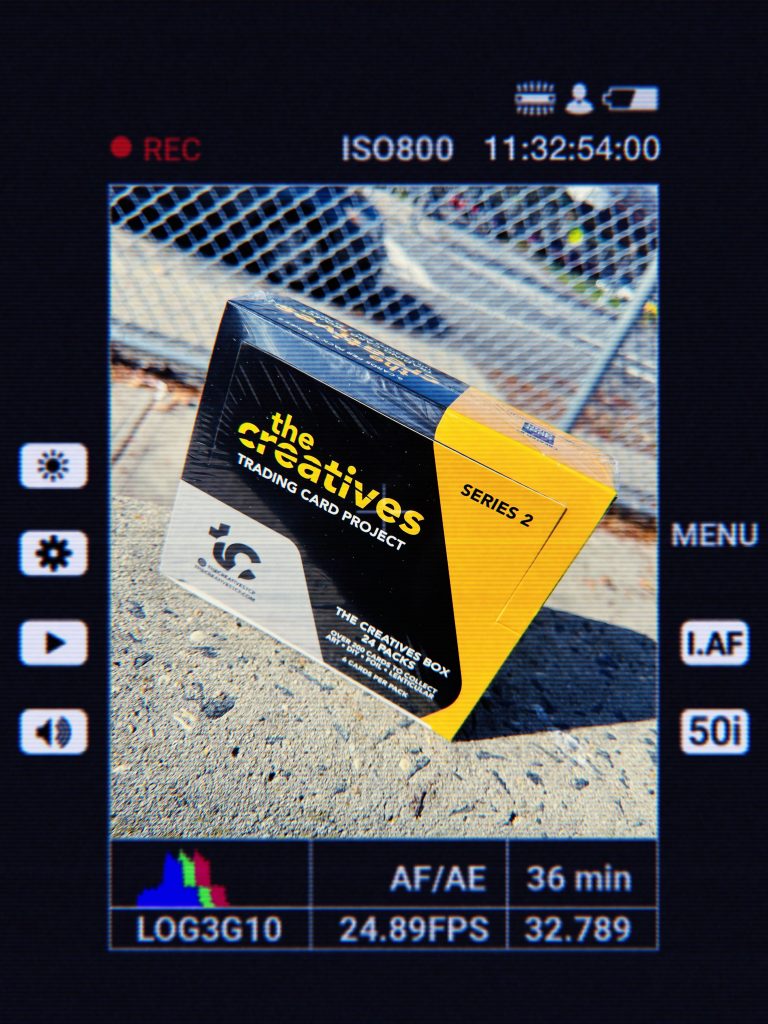 After surveying a few potential spots, Red decided on the venue in the Flatiron District (at 110 W 19 St New York, NY 10011 to be exact.) The space is sizable enough to hold a big crowd and over 50 vendors, plus its central location makes it accessible to the other boroughs for people coming from Brooklyn, Queens, or his home base in the Bronx. Once the location was established, there were a few more hurdles to overcome, “there’s licenses, there’s insurance, there’s so much stuff involved. There was a huge learning curve. But we got a good spot.”

Despite the obstacles, Red is excited for Creatives Con and what it holds. Utilizing the event, the convention will be the official drop of Series 2 for the Creatives TCP, with VIP ticket holders receiving a swag bag featuring prints, pins, promos, art toys and more, including a limited event only Creatives Project Card. With Series 2, Red has also incorporated a few new ideas as well. Certain select packs contain a golden card, which wins you a free piece of art. “I’m a big fan of Wonka, and I wanted to think of cool and clever ways to promote the new series,” Red explained.

Amongst the vendors, myself included, there’s a lot of hype going in. People are flying in from as far away as the United Kingdom for the event. Beyond an opportunity for vendors to connect with customers and collectors, it’s become an opportunity for vendors to connect with their fellow creatives as well. Plus, as the timing is part of Red’s coordinated strategy – as everyone prepares to start Christmas shopping, his hope is people take advantage of the fact that so many creatives will be under one roof, as a way for people to get their gift lists settled. “To me it’s like, let’s stop giving money to Jeff Bezos, let’s use this event and this space to fuel the community instead. Let’s invest in our local small businesses. Put money on their tables. Let’s put money where their family is.” 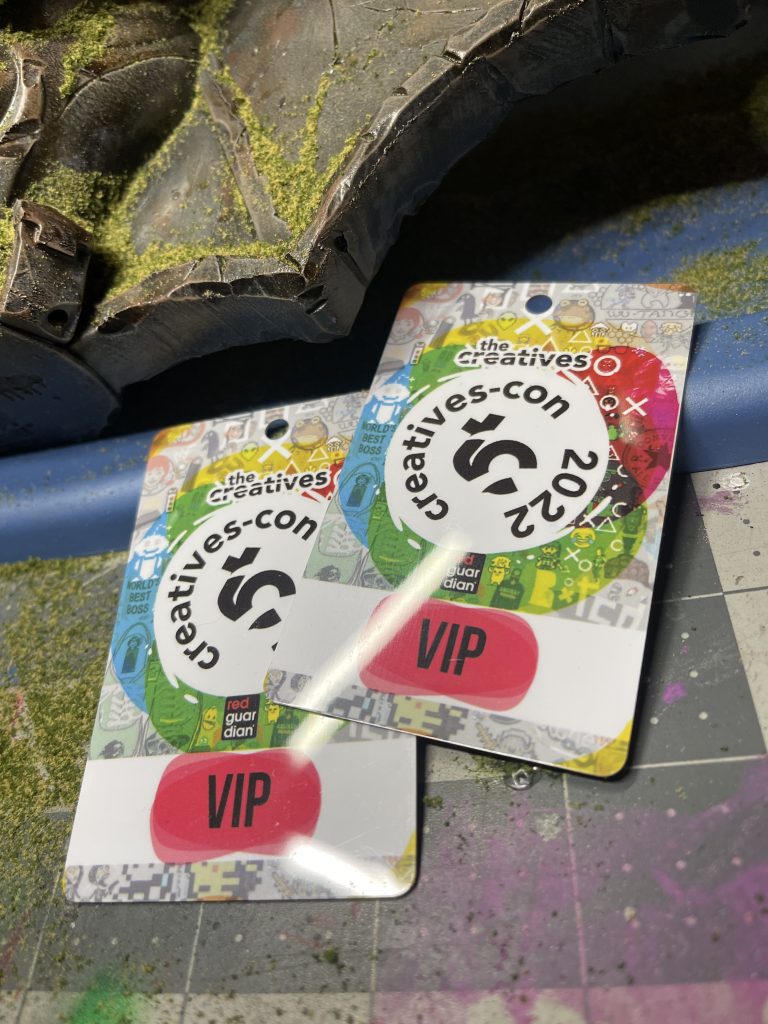 While the inaugural event is just one day, among Red’s goals is to one day host a 3-day convention, to the scale and magnitude of ComicCon. “My goals inspire me and keep me focused.”

The inaugural CreativesCon will take place Saturday, December 10th from 11am-8pm at 110 W 19 St New York, NY 10011 in the Flatiron District. Click below for tickets & scroll for a full list of vendors. We hope to see you there!

Emma Jones is a lifelong New Yorker who has been writing for as long as she can remember. Her first “story” was dictated to her father at age three, and followed a tiger in her family washing machine. Emma’s work is inspired by the multi-faceted experience of growing up in Washington Heights in a world of peers who’d never been above 125th Street. Her creative practice often features her fascination with New York public transit and the metaphors in everything from geography to anatomy. She is primarily a fiction writer but believes in the malleability of fiction to create experimental works. In her spare time, she practices yoga and is working towards an RYT 200HR certification.