RedLine and The Temple: Making Art in Denver's Five Points

This article is the first of a five-part series. The subsequent articles will be linked as they are published. The next installment will be available to read 4/4/22.

All things in life change, but that change is rarely as drastic as a synagogue becoming a punk house, then a rave club, then an art collective. Working in art journalism has taught me to be open to whatever comes my way, and when an author conference I was due to speak at in Lake Havasu, Arizona was cancelled due to COVID-19 concerns, I had to put my Spirit Airlines credit to use somehow. That was how I ended up in Denver, Colorado, home of The Temple, the aforementioned synagogue-punk house-rave club-art collective, and countless other vibrant arts organizations and tireless artists.

I came to Denver following serendipity to broaden my own understanding of fine arts. Growing up as a third-culture kid, I’ve always felt acutely that every place has a soul underneath its sidewalks. The same cultural transience that often made me feel incredibly lonely also gave me a natural curiosity for new places and enough chutzpah to throw my clothes into a bag I’d ordered on Amazon specifically to be small enough to be free on a Spirit Airlines flight. I had no rental car and realized I had forgotten to bring a hairbrush on my trip. So, I tightly braided my hair and set off to explore the world of designer marijuana, craft beer, and unique visual art. In this five-part series for UP, I will take you into the hearts and minds of the people and organizations who make up this city at the foot of the Rocky Mountains.

We’ll begin our journey on Arapahoe Street in Denver’s Five Points neighborhood, where The Temple and RedLine Contemporary Art, two of the city’s most prominent art coworking spaces, face each other at a wide, flat local intersection between a Greyhound bus depot and a Christian charity organization. As I was traveling without a car, I found myself walking through this intersection flanked by two community art spaces often, soaking up the wide, blank Colorado sky.

RedLine was the first place I went in Denver, and The Temple was the last. When I first entered the chic glass building that houses RedLine, visitor services coordinator Efraín Leal Escalera told me: “We call it Five Points, not RiNo.” This was a familiar refrain to me as someone who grew up in a gentrifying neighborhood in New York. Realtors and popular media have increasingly rebranded Five Points, a historically Black neighborhood, as River North or RiNo. It brought to mind the short-lived attempt to nickname Washington Heights, where I spent my childhood, as the cringeworthy WaHi. Profit-seeking realtors try to decide what the soul of a neighborhood is, but its artists are the ones who ultimately preserve that soul.

RedLine features an ongoing exhibit space and an educational center which produces mentorship programs and creative resources for local children as well as those experiencing homelessness. Since 2008, it has committed itself to socially engaged art and community outreach. “The name comes from the idea of gunning it in a car until the gas odometer hits the red line,” Escalera said. “But it’s taken on new meaning with the idea of redlining, how developers marginalize people in their own neighborhoods.” Each year, the gallery features a new theme, and 2021-2022’s was ‘Afrofuturism and beyond,’ fitting for a neighborhood where the past and the future are in constant conversation. 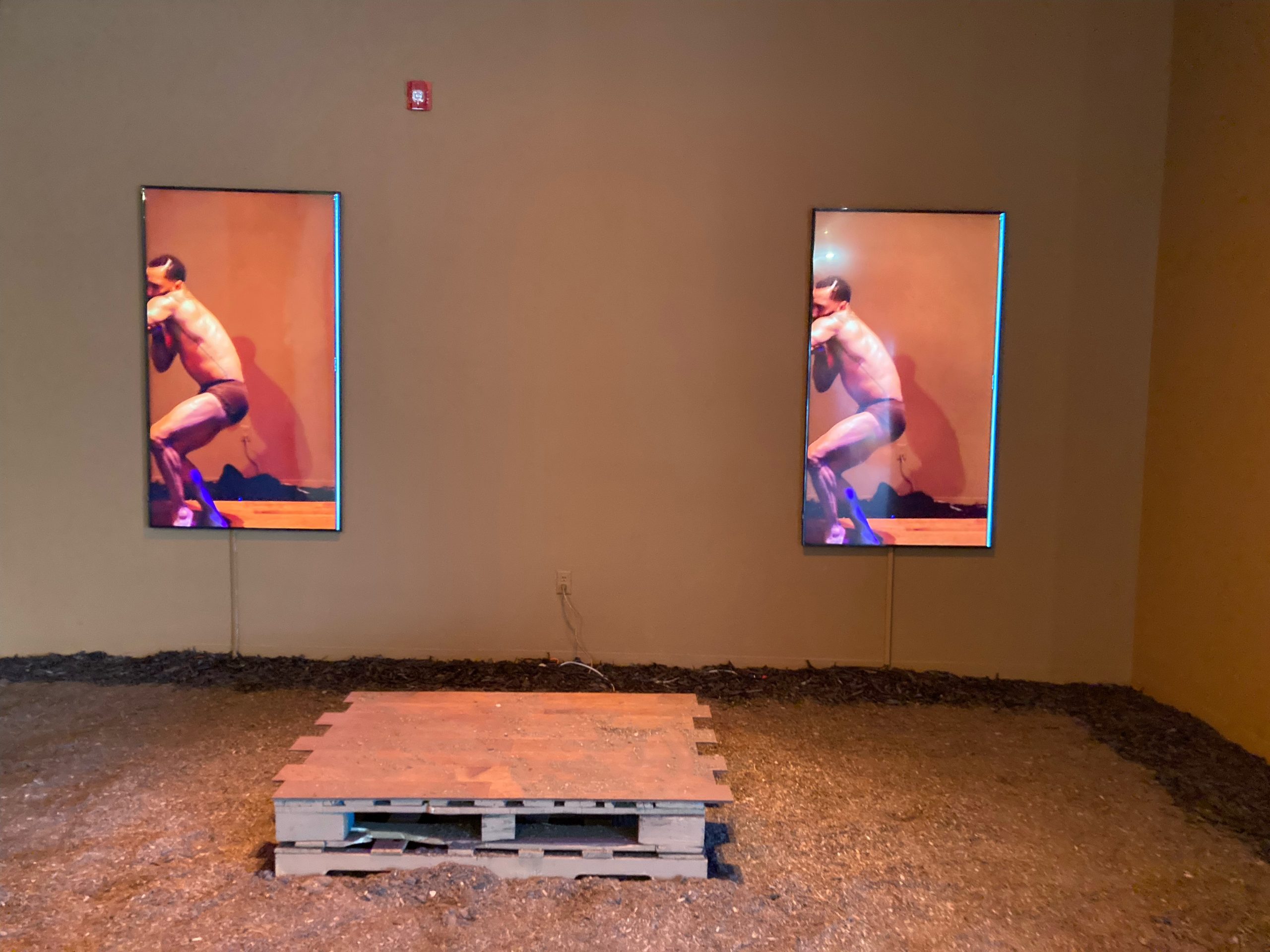 “The name comes from the idea of gunning it in a car until the gas odometer hits the red line,” Escalera said. “But it’s taken on new meaning with the idea of redlining, how developers marginalize people in their own neighborhoods.”

“Visitors are encouraged to go through the exhibits and see the whole space as a single encounter,” Escalera explained. The exhibition, titled Rhythm Reboot, featured both large and small-scale pieces, from one of Anthony Garcia Sr’s colorful murals to multimedia pieces like radio art by Ben Coleman and virtual reality art by Micheal Sperandeo. Marsha Mack‘s Luck Must, a tableau of the “living cultural site of the Asian grocery store” that mixes a portrait of the artist’s mother with tiled bright-red strawberry candy wrappers, stands out in its maximalist nostalgia and rich sensory presentation. 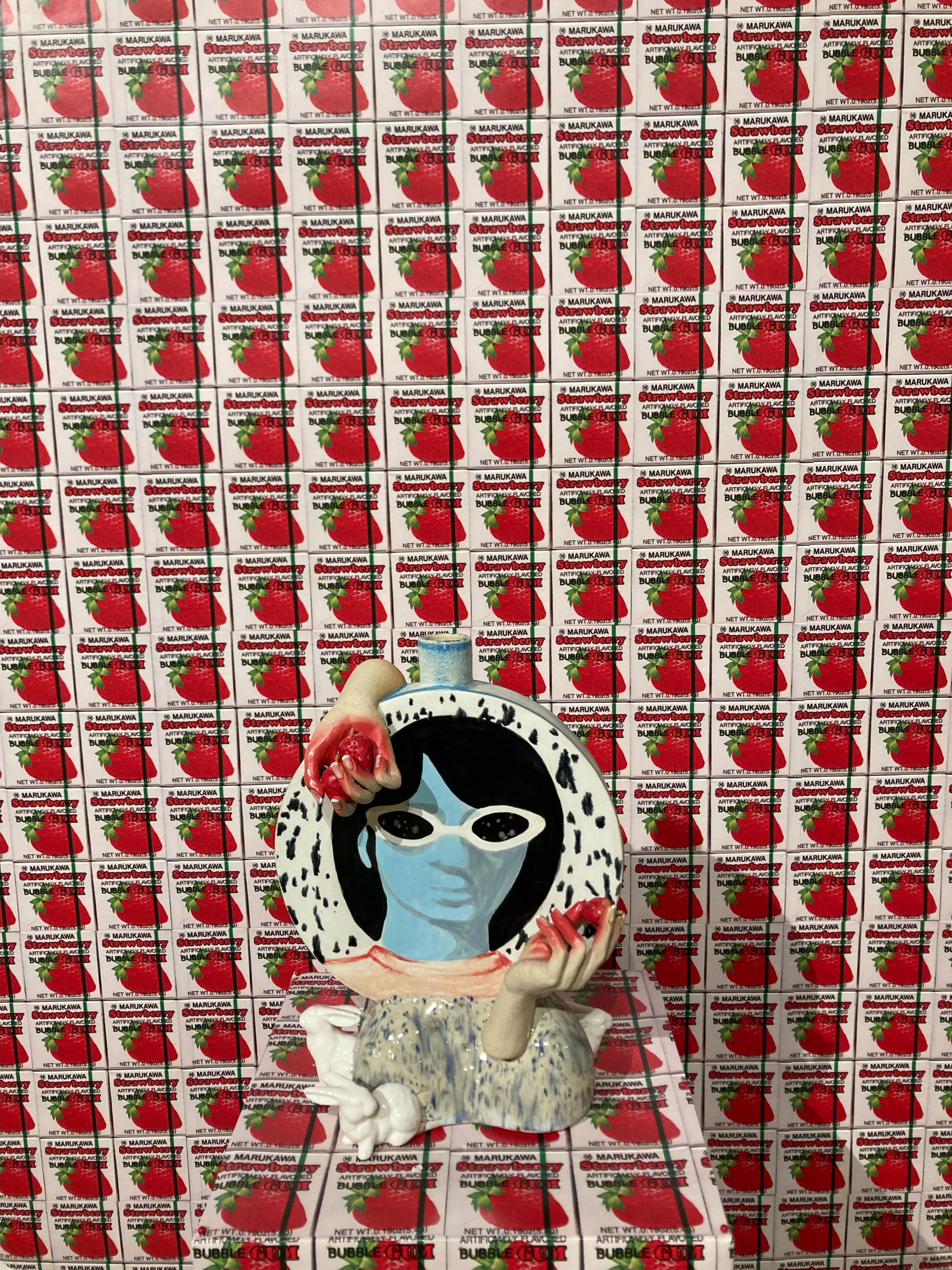 I spoke to Denver-based sculptor and found object artist Taiko Chandler about her piece series, One by One. “I got attached to some of the objects I found, including the traffic cone that makes up this piece,” she said. One by One #1 shows a blackened traffic cone with a series of golden pins stuck into it. “Finding these objects reminded me of when I was growing up in Japan seeing cedar trees that were planted during periods of economic growth just wither when no one could take care of them,” Chandler said. 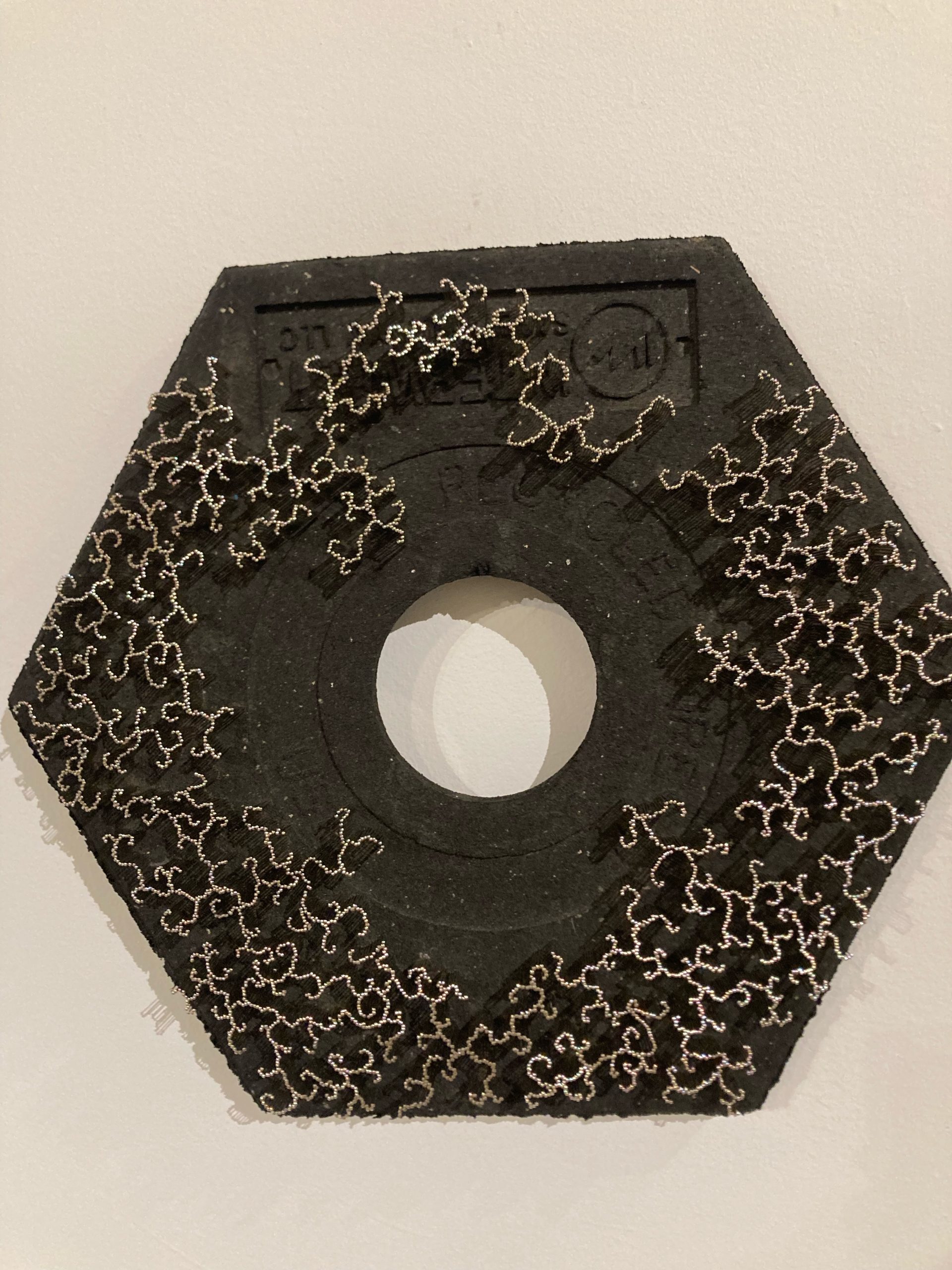 One of Chandler’s other pieces in RedLine was Fragile Light, a heat-manipulated fabric behemoth hanging from the ceiling. “It looks light,” she said, “but it’s very heavy.” Chandler’s work represents the stress and uncertainty she felt during the COVID-19 pandemic and making art out of an unconventional material is a means of letting out feelings that are difficult to explain. I was struck by the contradiction inherent to something being at once light and heavy. This dialogue between lightness and heaviness is the same one that exists between old and new, change and stagnancy. There’s a comfort with contradiction and knowing that all change comes at a price. What’s important is a place holding onto its integrity. 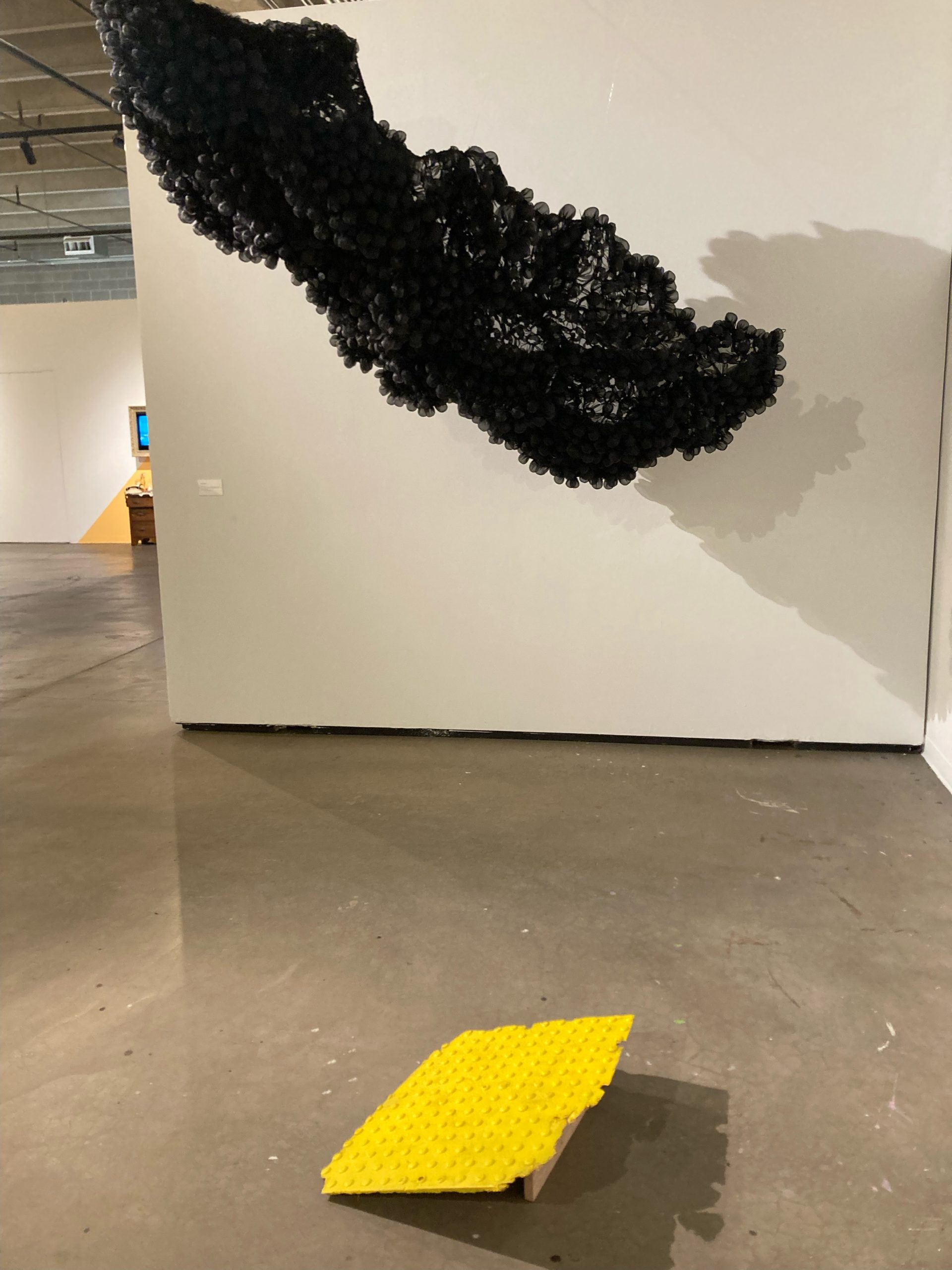 One of Chandler’s other pieces in RedLine was Fragile Light, a heat-manipulated fabric behemoth hanging from the ceiling. “It looks light,” she said, “but it’s very heavy.”

This idea came to me once again when director Adam Gordon was guiding me through The Temple, across the street from RedLine. The towering grey building, designed by elite Denver architects, once housed Temple Beth Joseph and Temple Emanuel. In its years as a DIY music venue, Nirvana and Black Flag have played in it, making it one of the few buildings in the world where both a rabbi and Kurt Cobain have commanded crowds. There was only one piece of Temple Beth Joseph remaining in the building – on the otherwise off-white walls beneath the green glow of an EXIT sign, some mahogany wallpaper adorned with interlocking golden stars of David peers out as a reminder of the past. 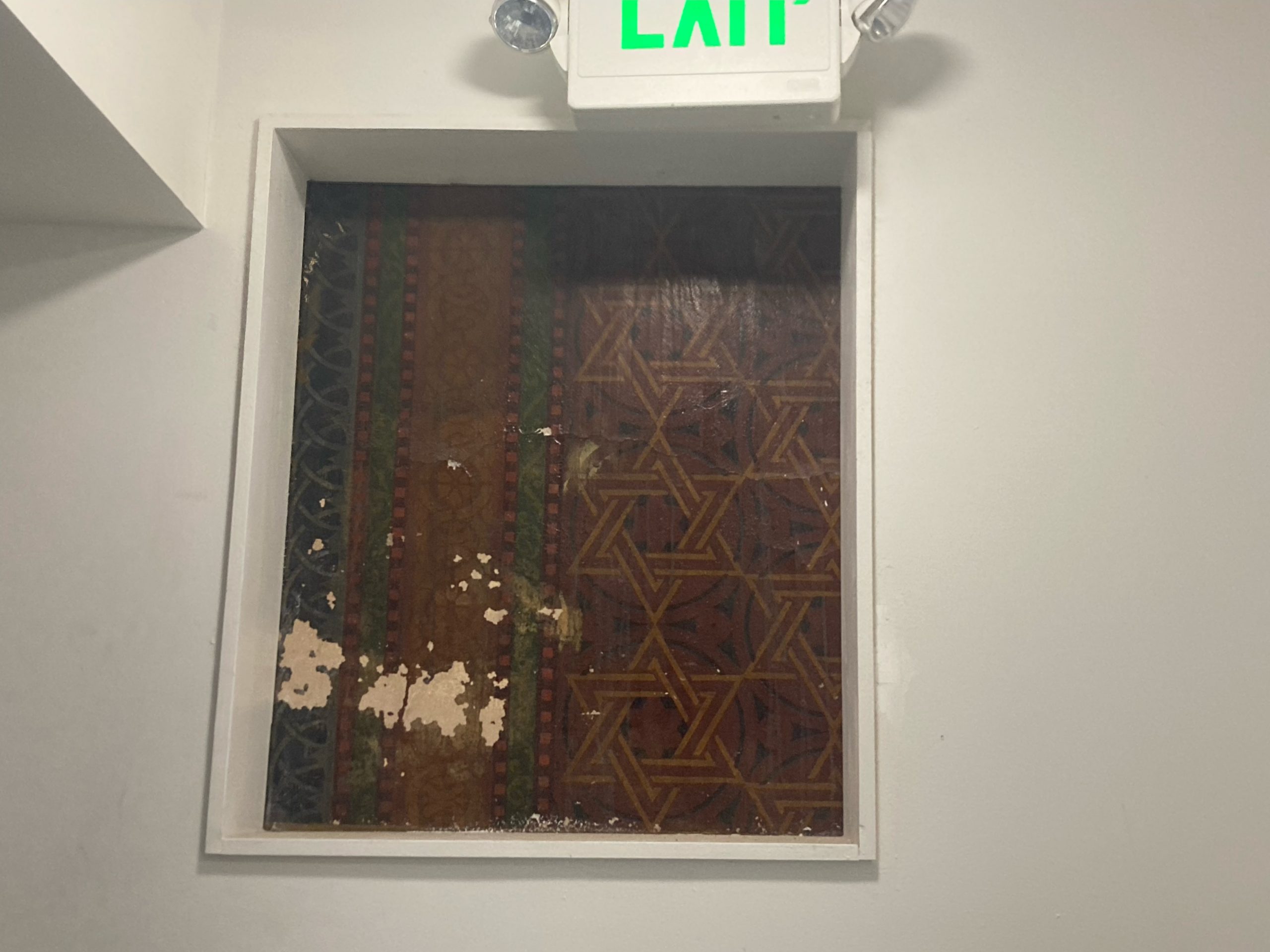 In its years as a DIY music venue, Nirvana and Black Flag have played in The Temple, making it one of the few buildings in the world where both a rabbi and Kurt Cobain have commanded crowds.

Where RedLine is wide, with modern glass walls and glossy plywood floors, The Temple is a multi-floor building with narrow hallways. RedLine is a classic contemporary art space with room to breathe and a focus on social consciousness. The Temple is something more anachronistic and harder to pin down.

But both have the same fierce dedication to Five Points and the people who live there. Gordon used to run Denver’s Sustainability Park or S*PARK, an offshoot of RedLine, and led billionaires looking to buy the run-down former synagogue on Arapahoe Street when it was falling apart. “It looked like old tennis sneakers—it looked like complete shit,” he elaborated. But all of the wealthy would-be owners didn’t incorporate the community at all into their plans to renovate the space.

At the time, it was Eugene Tepper, a prominent Jewish businessman who owned the first merchant ship to come into the modern state of Israel, who owned what is now The Temple. Tepper sold the building to Gordon for an inexpensive price and Gordon got to work renovating it. As we walked through it, the sounds of handsaws and jackhammers punctuated the air to create new parts of the space for a company similar to WeWork residing on one of the lower floors. “This building is reflective of Denver, in a way,” Gordon observed. “Whatever’s going on in this building at any given time can show you what’s going on in Denver.” 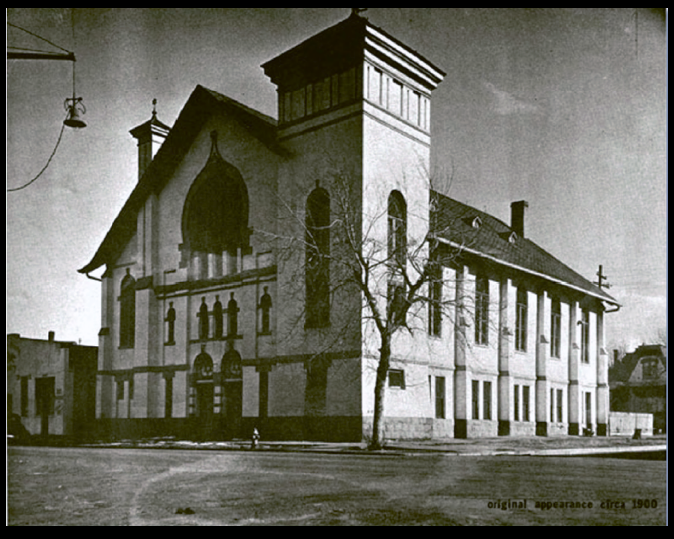 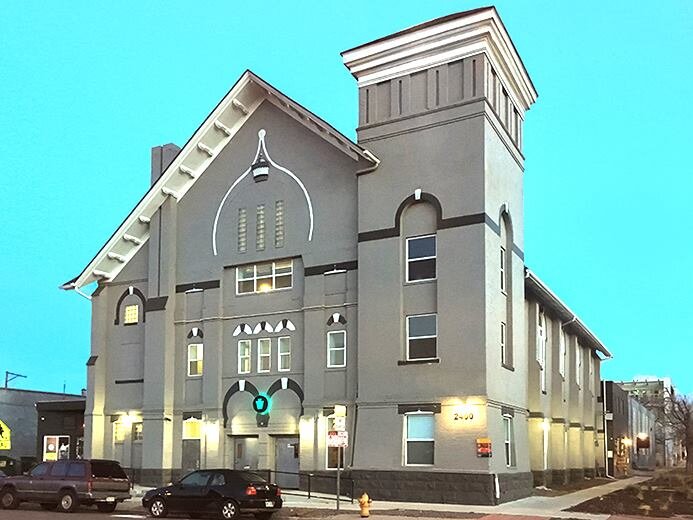 And that may be true, because The Temple, like Denver, is incredibly difficult to define. The Temple’s residency program houses Detour, one of Denver’s most prominent street artists, but alongside big names like that there’s also a Russian avant-garde collector and a crowdfunded bakery. “Here, the thing is, I don’t care if you’re an asshole. You don’t have to sit in front of a board or a committee. If your work is good, you can come here,” Gordon told me. 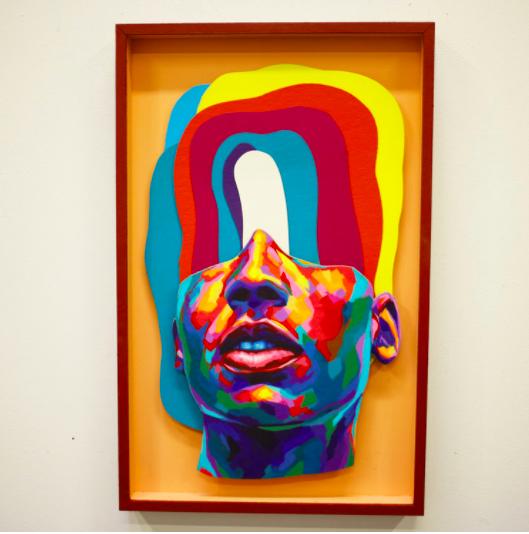 “Here, the thing is, I don’t care if you’re an asshole. You don’t have to sit in front of a board or a committee. If your work is good, you can come here,” Gordon told me.

Despite that it hasn’t been a house of worship in some time, there’s something oddly spiritual about the place. Creating art is sacred, though it requires no liturgy or theology. RedLine and The Temple demonstrate two different models of running art collectives, one more formal and one more informal, but neither better than the other one.

The fine arts industry has historically told artists they have to be one thing only and fight for a single spot in an ivory tower gallery, a mindset which pits us against each other. But in Denver, the relationship between RedLine, The Temple, and the neighborhood of Five Points is a symbiotic one. Arapahoe Street is united by a devotion to Five Points, whether in a punk house, a synagogue, an art studio, or a gallery.