Review: 'In Their Eyes' by Zabou at Saatchi Gallery, London

March 1st. The beginning of the month. Also, the beginning of a TFL strike, which in London means the underground will not be working, translating into city chaos. This should have been the day where Zabou opened her most expected solo show at Saatchi Gallery in West London after many difficulties to do so during the pandemic. Now that Boris Johnson has recently released all of the Covid 19 restrictions in an attempt to go back to the normalcy we all forgot about at this point, we have fallen into the illusion that our problems are over. The pandemic has taken up so much space that not only do we remain oblivious to our lives before it in terms of what we lost, but we also let slip from our memories the rest of the difficulties of living in such a hectic city. 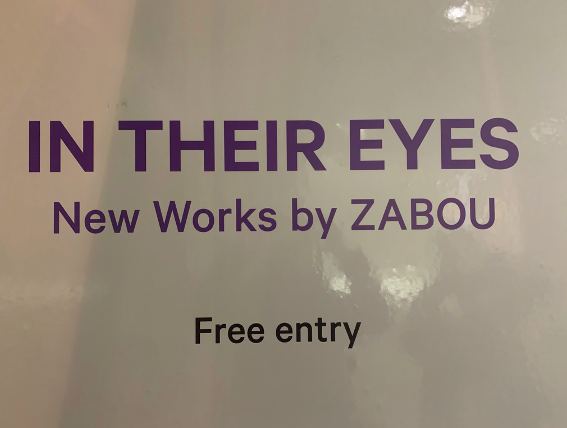 For the first time in a while, we saw ourselves crowded in busy buses, our faces exposed from the nose down, our journeys delayed by a minimum of one hour. Funny thing? My body felt uncomfortable, not due to people’s proximity, but because in the middle of my hustling, I was running late to an event that was not held on Zoom.

Zabou was also on time; her friends coming from France had a better commute than us. She deserved a full house, people elbowing each other to appreciate her art, spilled wine on the floors and continuous flashes from cameras that could not get enough shots. She had a reduced audience instead. I could not help to think that maybe this was more aligned to her personality. I had the chance to interview her last April and from the impression I got, she is a reserved person, and this opening night felt intimate.

She deserved a full house, people elbowing each other to appreciate her art, spilled wine on the floors and continuous flashes from cameras that could not get enough shots. 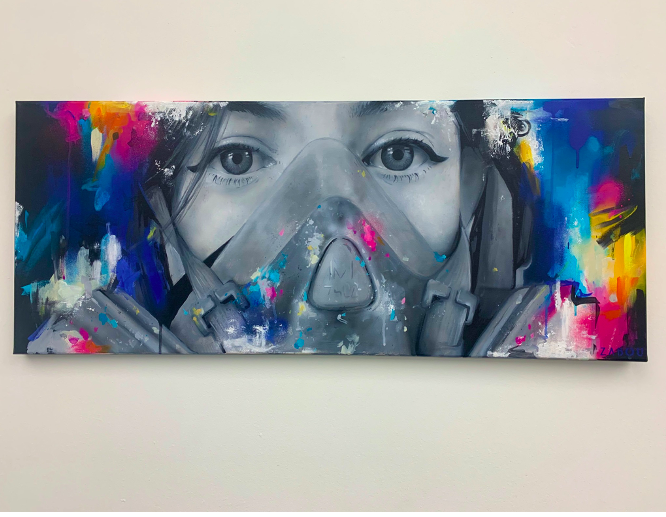 Born to Pain, By Zabou – Photo by Sabrina Ortolani @sabriortolani.ph

What will you find? Some of her best murals which are spread around the walls of Europe, painted again on canvases this time, organized in between four walls. When Zabou began developing a signature style, she combined two of her many artistic skills: photography and spraying. In our previous meeting, she told me that when she started to mix these two, her work took a realistic shape and things started to shift. In these four walls at the Saatchi Gallery, you can also find yourself following her creative process like a live film. In Their Eyes does not only show you murals on canvases but the black and white portraits taken before the spraying begins. She has made a special installation for this, which she painted right there at the gallery. “They had to build a wall for me and install it here. The eyes you see moving have been painted in fragments, seven per second. It was crazy.” Zabou might as well just be inviting us to look through her eyes to what she found in theirs. 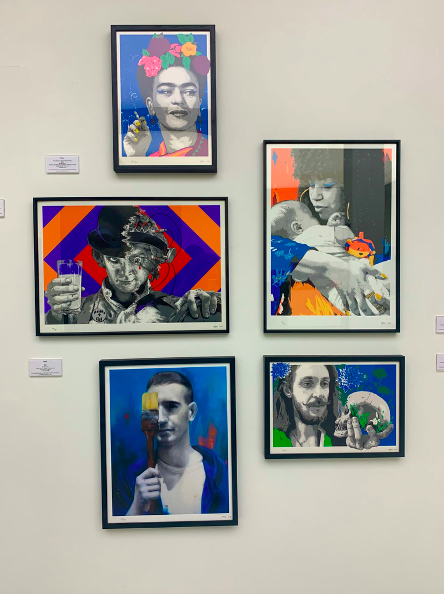 On the opening night, while many people could not attend, I was glad to see many of her models walking around the gallery, taking selfies with their canvas selves. That night, fragmentation became a vivid reality, and I was happy to be a witness. 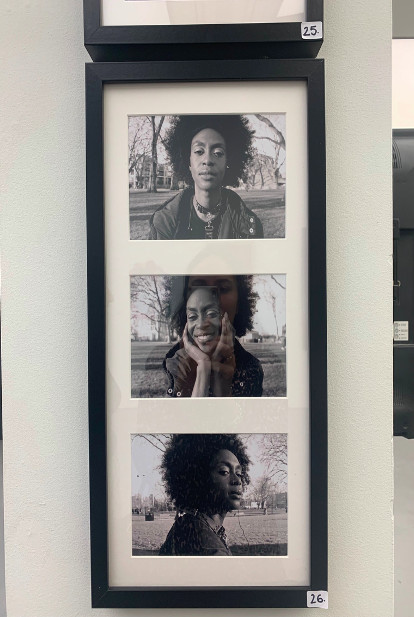 That night, fragmentation became a vivid reality, and I was happy to be a witness. 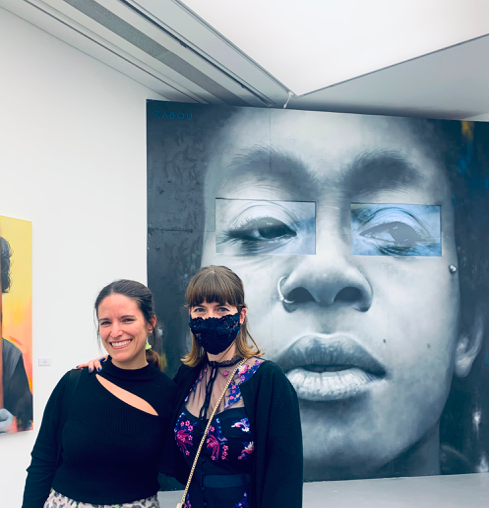 I loved the progression that her paintings show, having had the privilege to study her evolution as an artist. Personally, the pieces that struck me the most were the women she has transformed in her pieces, defying the notion of objectification of women in our culture, by presenting them raw, vibrant, close, imperfect: human. The painting Mum shows a mother looking at her baby, both in black and white, stressing the border between the subject and the surroundings, conforming her branded style. It feels organic and genuine. 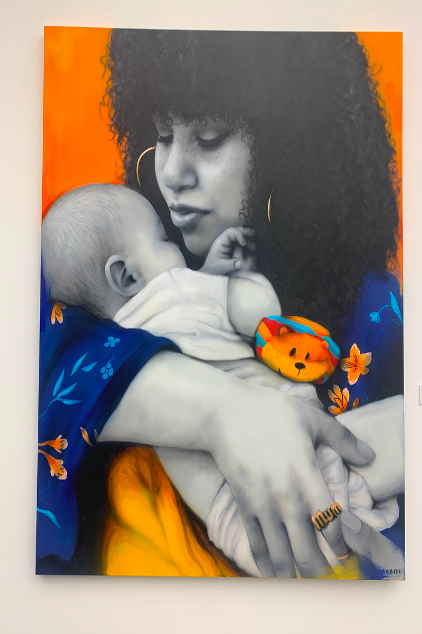 Another landmark of the exhibition is Beth Harmon, the main character in the series that got us all through the pandemic, in Zabou’s rendition of The Queen’s Gambit which was praised even by Oprah Winfrey. In the actual mural, that served me and Zabou as a meeting point for our interview last year, Beth is surrounded by the usual colorful background she uses to enhance the portraits. This time, the form of a painting allowed her to be more playful and use an actual chess board as a canvas. Bonus for me, Anya Taylor-Joy, who plays the chess champion in the series, is also an ex-pat from Argentina. 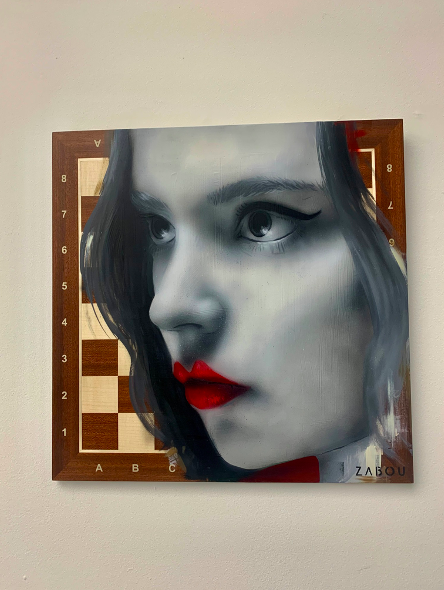 The Queen’s Gambit by Zabou – Photo by Sabrina Ortolani @sabriortolani.ph

I am a sucker for the concept of duality and anything that follows it, so to find the painting Same But Different was a real treat. It shows twin sisters holding hands, laying on the floor, piercing the camera lens with their seemingly identical set of eyes. Sabrina, our photographer, got to push the concept a bit further and did her magic shooting them in opposite sides of their own fragmentation. 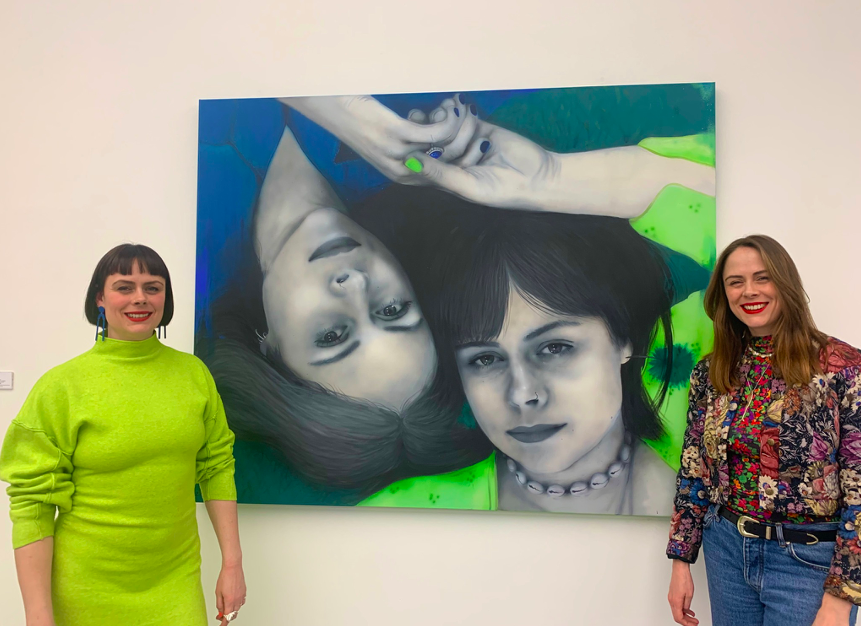 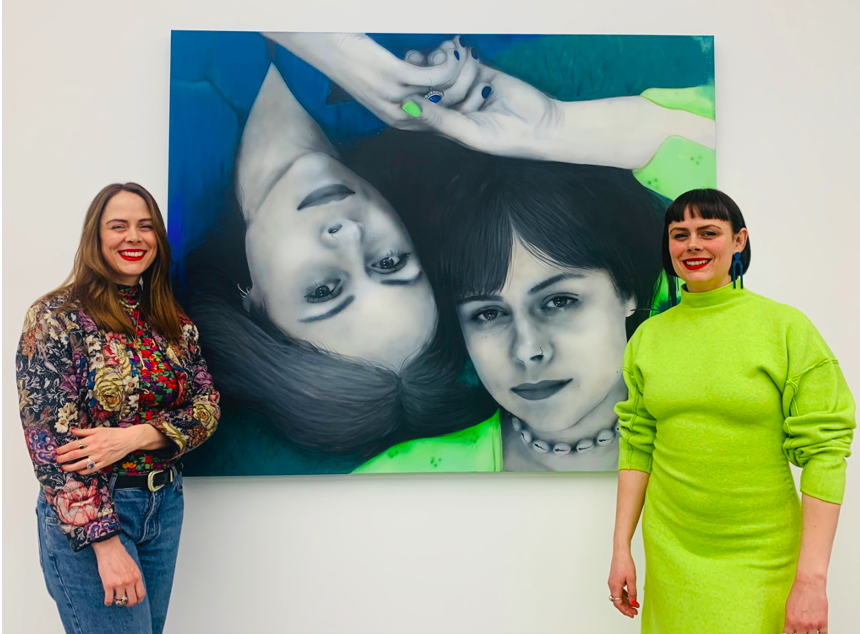 Same But Different by Zabou – Photo by Sabrina Ortolani @sabriortolani.ph

Faithful to her custom of not having her face photographed, to which the face masks have served her good, Zabou was in a cheerful mood, greeting everybody and taking pictures with her models. I did get to talk to her for a bit, not with the mindset of a journalist interviewing an artist, but as an acquaintance, enjoying a glass of champagne. In France, they have a warmer word for an acquaintance that I cannot find in English or Spanish. It’s called ‘copain(e)’, and that is the vibe you could breathe. The intimacy generated by the synergy of her exposed creative process and a room that was not as congested as the tube, left space to interact, appreciate, stop, and stare at what Their Eyes were holding. Zabou explained to me how she was feeling, “This is the first time that I feel really proud of what I made. I am exhausted, but I am really happy.”

“This is the first time that I feel really proud of what I made. I am exhausted, but I am really happy.” 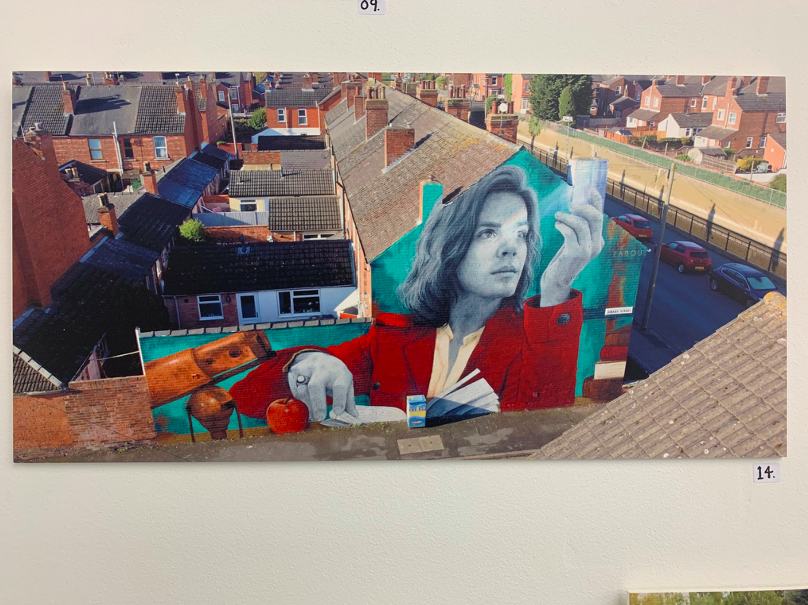 It took me one hour and a half to get home from Saatchi. I could only keep picturing the long journey Zabou went through to, after 10 years, get her first solo show. And I concluded, while looking through the bus window to a rainy chaotic London, that long journeys are ok, as long as you reach your destination. Embark on Zabou’s trajectory in Saatchi Gallery, until March 27th. It will be worth it.

Candelaria Barandiarán was born and raised in Buenos Aires, Argentina. Her passion for learning different cultures has led her to live in Hawaii, California, France and now the UK, where she resides in London. Candelaria has written articles and short stories for several publications such as Tundra, Argentina Cultural Exchange, WorldPackers, Chicas in New York, and currently writes a column for The Londoner blog “People Who Do Things”. When she is not traveling or meeting new people, you can find her in a vintage bookshop.