Jorge Torrealba’s migrant odyssey greets you as you enter Venezuela Art Fair at One Art Space. It’s a mammoth painting at 48” by 72”, and it’s the kind of painting you could get lost in the way Cameron Frye does with in the museum scene from Ferris Bueller’s Day Off. Cartoon human forms flee across a desert that stretches across a golden bird’s body, the bird’s neck bisected by barbed wire as a butterfly covers its eye. 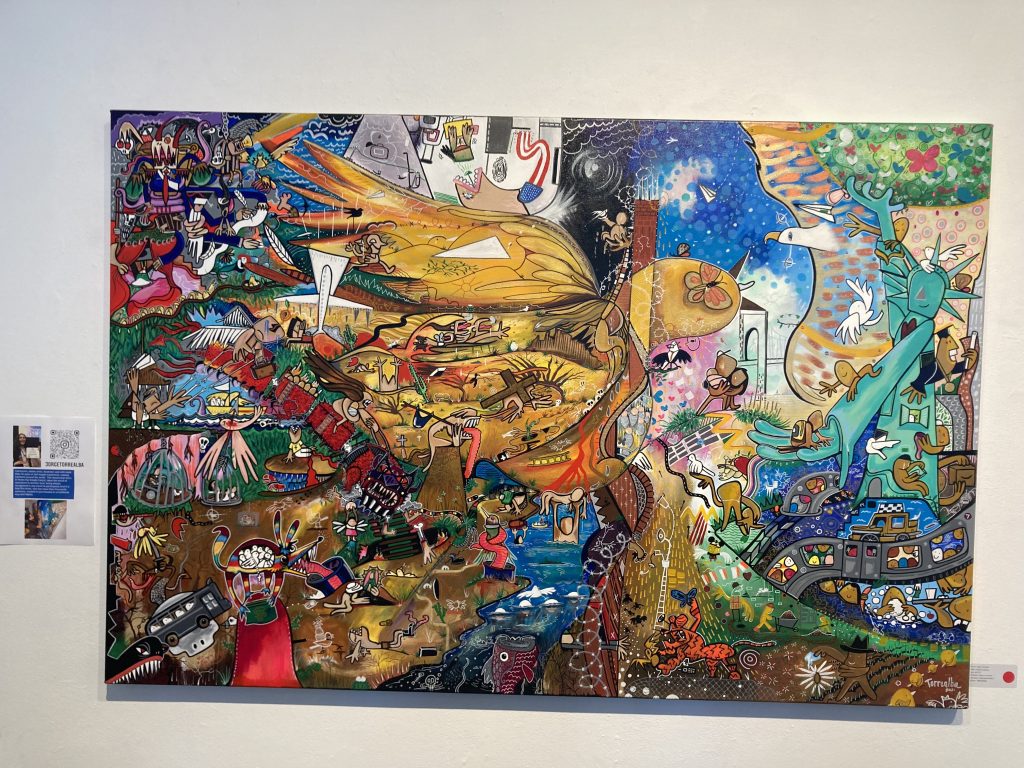 Silver and gold detailing makes the painting, which has a dazzling color scheme of blues, greens, reds, and oranges, seem to glow. There are some clear analogs to opportunity in New York, the perils of immigration from South America, and the underbelly of consumerist society migrants find themselves in. But “migrant odyssey” is a master class in abstract representation. It’s a story within a painting that takes the viewer on Torrealba’s journey along with him.

On the back of the wall that houses migrant odyssey, Alex Siniscalchi’s 11” x 14” canvases tell a more direct, but equally complex narrative. In one, a UFO with a yellow cab decal and the marker Uber hovers menacingly in a gradients blue sky, while a silhouette hangs its head. Siniscalchi’s art has a humorous edge to it, but that edge is a sharp and somber one—a piece in the corner shows a greyscale figure wearing boxing gloves with a vibrant Venezuelan flag on them, fists up and ready to fight. 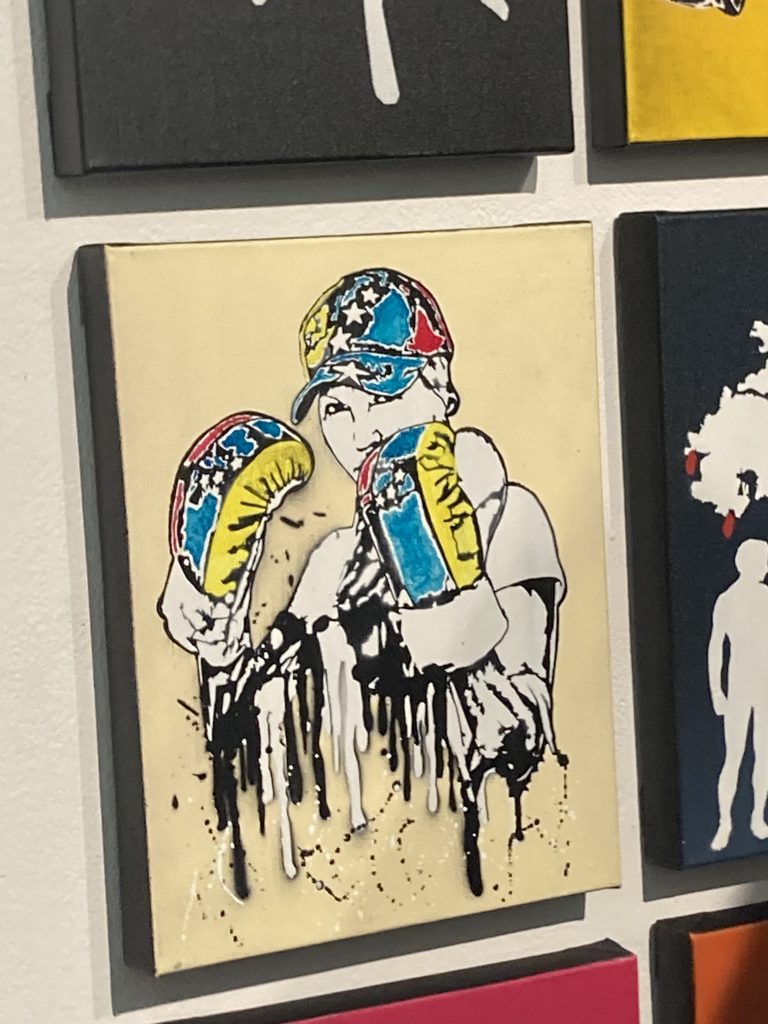 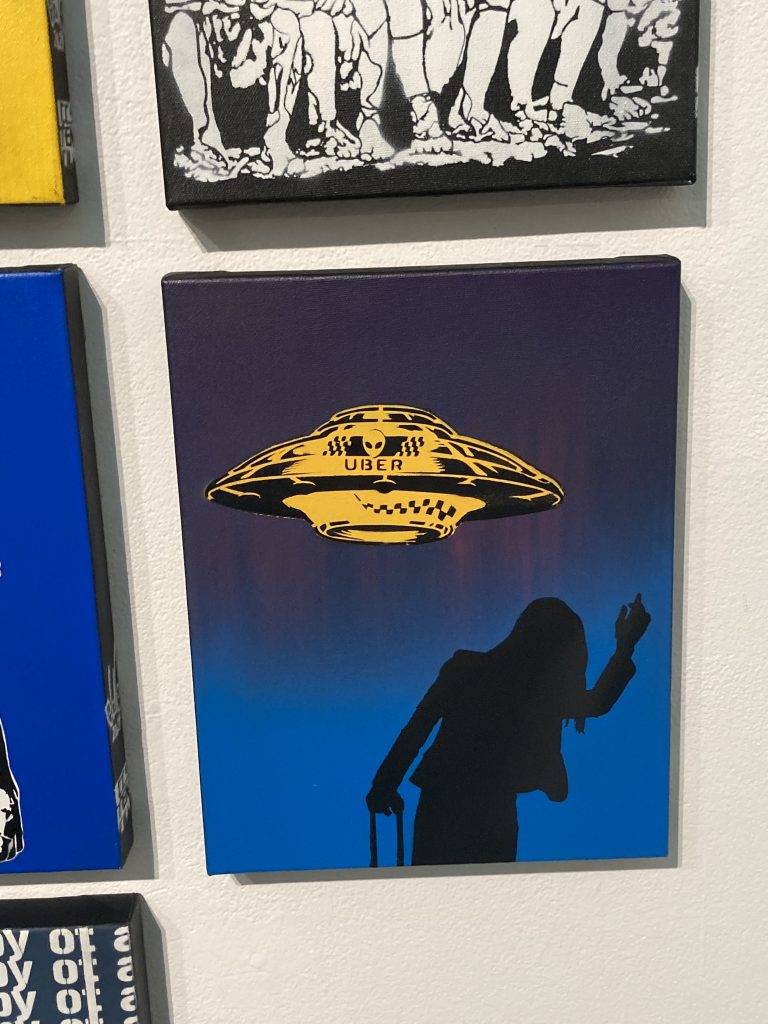 Venezuela Art Fair was the first of its kind, a gallery dedicated entirely to art by Venezuelans, and it would be an understatement to say it was a raging success. Crowds of people wandered in and out of the open-air gallery, and a mix of Spanish and English floated through the air. Groups of friends gathered on the gallery steps to talk and sip drinks. The artists in the show ranged from 3D modeling, to sculpture, to cartooning, to traditional oil on canvas painting, and what interested me was that though the only uniting factor seemed to be their Venezuelan origin, some common themes arose in the works presented.

An alternate framing for the show could be “multidimensionality,” as many of the paintings on display used alternative or multidimensional art techniques beyond 2D visual representation. NFTs were for sale, and more than a few pieces hung suspended in the air rather than on gallery walls. At this show, art felt alive, always changing and mutating. I watched Manuel Luces’ “Sunset under the bridge,” a psychedelic 3D rendering of the Manhattan Bridge, get taken off the wall and claimed, no doubt going to a happy collector. Luces used multiple canvases to make the cars on the street pop out of the scene’s foreground. The bridge juts out of the river against the sunset in a tableau that looks surprisingly realistic, yet retains a magical perspective. 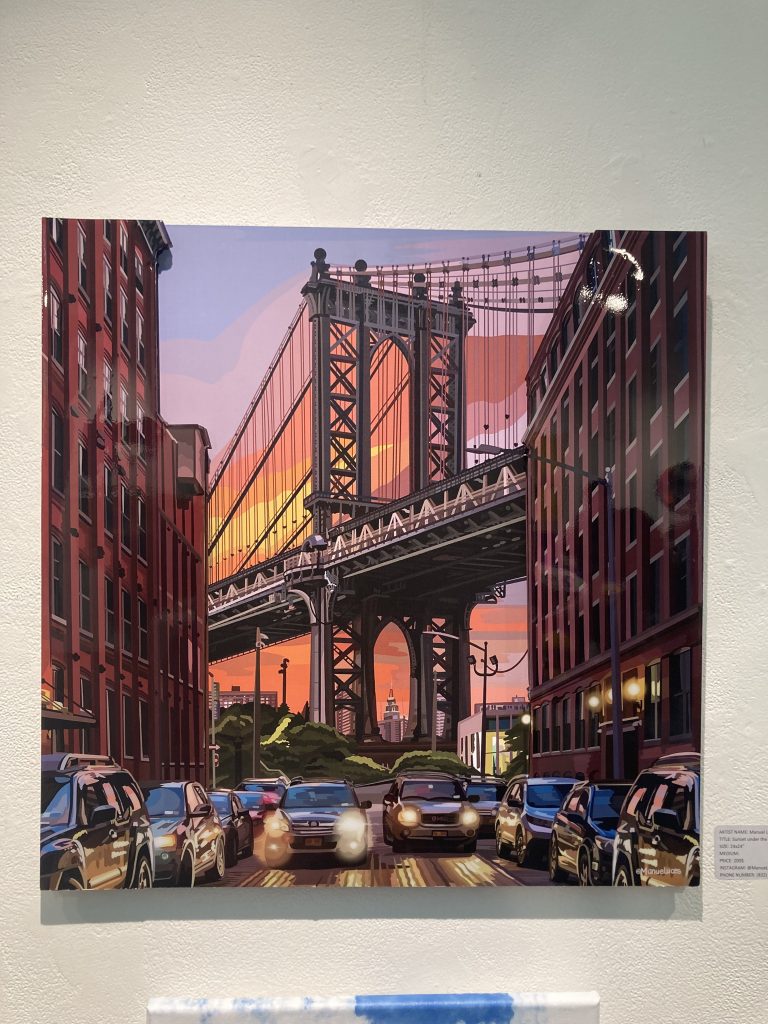 Abstract, philosophically-inclined artist Lino showcased a collection of geometric, undulating squares in a series called Chromecubes “My work is all about reality, but not reality as something unique and unbreakable, but rather as something ethereal, subject, that continually mutates with each passing second and that depends on the point of view of each one of us,” he wrote. Chromecubes uses rhizome shapes and an RGB color scheme to create pieces that test the limits of perception as you look at them. Walking through Venezuela Art Fair, it was hard not to linger for ten or more minutes simply staring at some of the pieces to spend time with them. 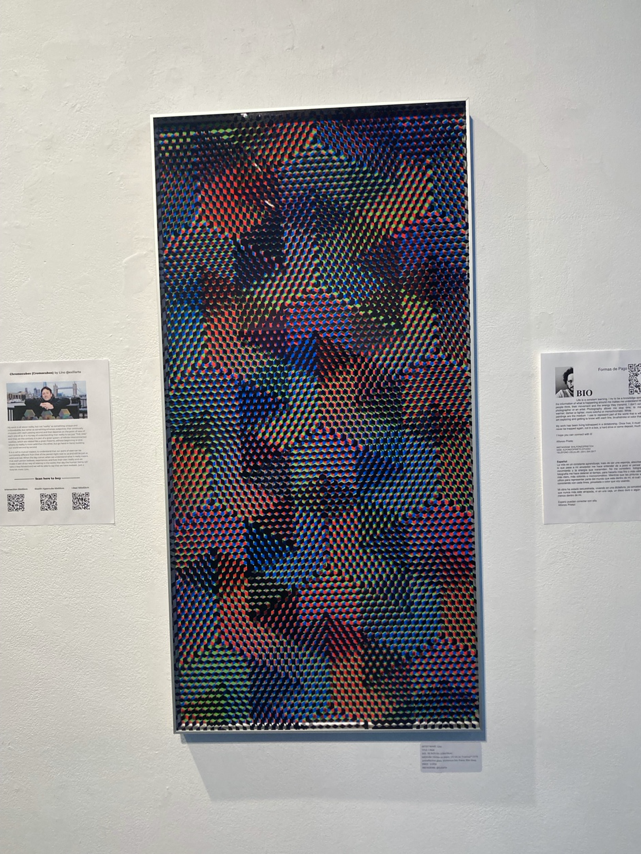 The wall art disappeared into collectors’ hands from time to time, but the hanging mobiles near the center of the space physically changed as people moved through them. A gallery-goer jostled past Zulimar Mendoza’s suspended mobile of closed and open eyes, and a once-closed eye turned into a wide open one, a single tear dripping from its multicolored iris. There was certainly a crowd, so within an hour the eyes closed, opened, and swayed in the air many times.

Mendoza’s circular canvases have names like Cry now but do something later and I said to myself, why do we deserve this? Under Mendoza’s brush, teardrops look like stardust and the red veins on eyeballs look like rivers. In My reality your reality, a teardrop welling up in an eye reflects a fiery aurora borealis above a forest of pine trees. “This was my first time doing these circular canvases for the eyes,” Mendoza said. “My obsession is painting eyes, but I think this form adds something. For My reality your reality, I wanted to show how we think we know what something is, but we don’t always,” she explained, echoing Lino’s sentiments about a multidimensional reality. 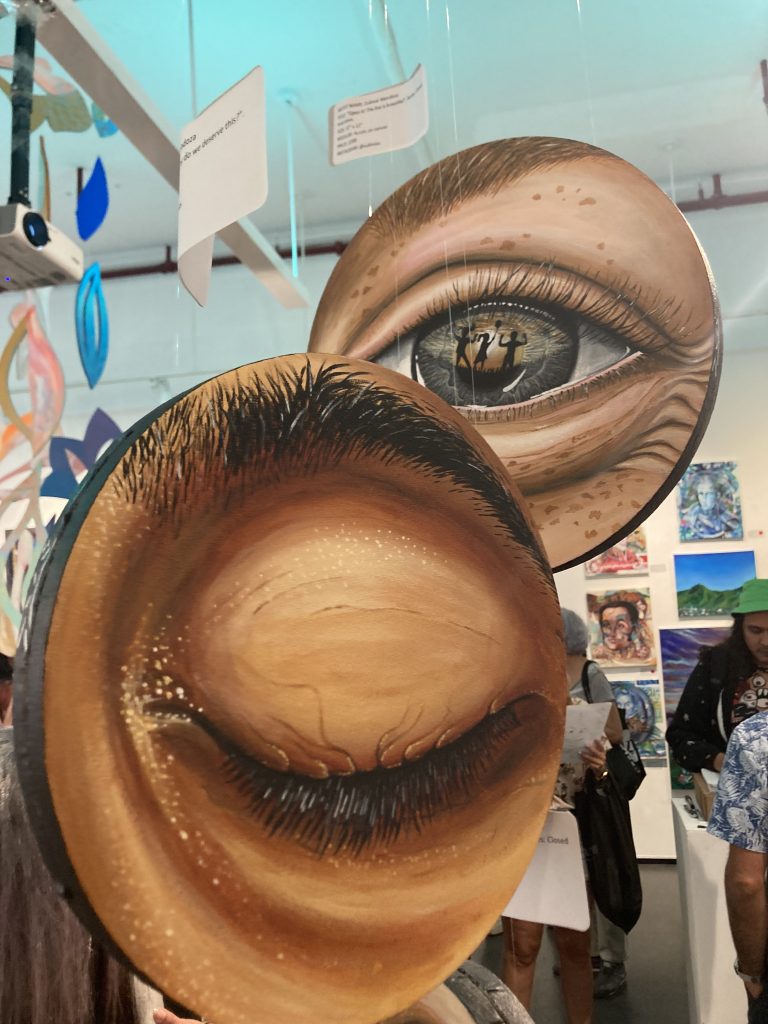 Mendoza conveys deep, layered meanings inside of an 8” x 8” circle, an interesting contrast to the enormous canvas of Torrealba’s work. She pointed me to the scene inside of I said to myself, which did do we deserve this, which shows a city skyline with fluorescent rockets above it. “In this piece, I was inspired by the bombs in Gaza – and the eye on the other side, the closed eye, the title is If we die, we die together, which was something I read that a mother in Palestine said to her child.” That commentary added a moving new dimension to the piece, and it showcases Mendoza’s impressive ability to pack moving emotional landscapes into the diameter of an eyeball.

The American art world’s view of Latin American art is anything but multidimensional. I would be willing to bet that certain curators would be unable to locate Venezuela on a map. Stereotypes about Latin American art and culture as a “vibrant” or “unsophisticated” monolith are still pervasive, and museums shove it all into one room in their enormous art deco buildings. At Venezuela Art Fair, Venezuelan artists got to be front and center, not lumped into a broad Latin American identity or represented as one canvas in a room. 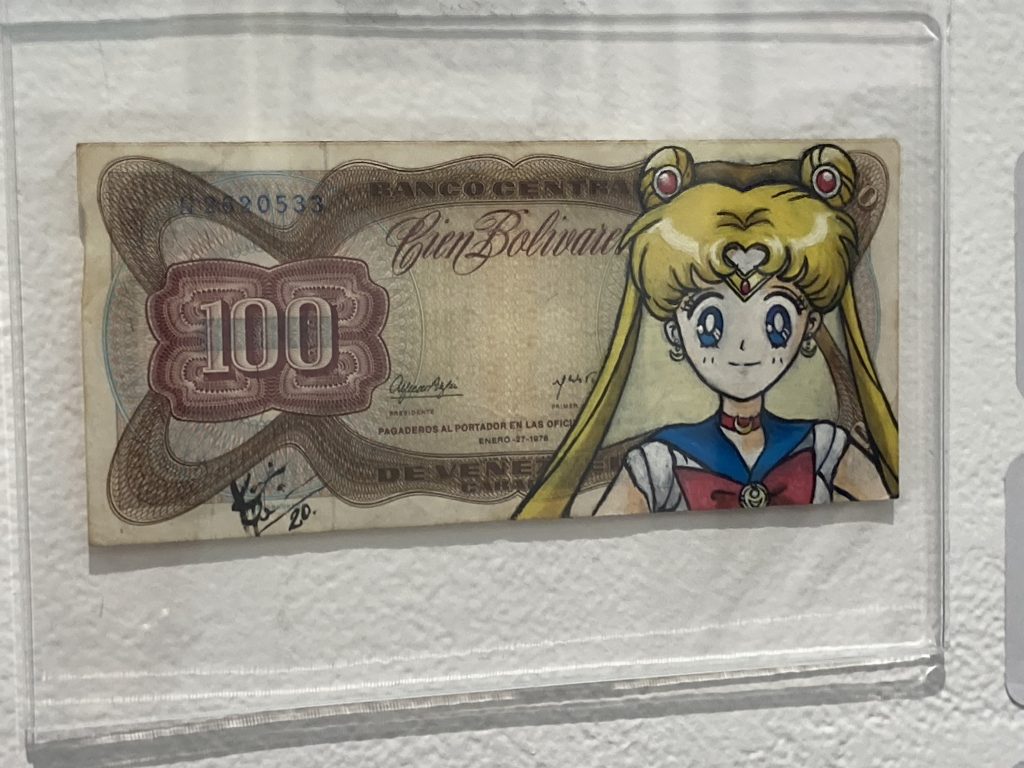 Among the other highlights of the show were Karina Freites Monaca’s multimedia painted Bolivar bills, which feature cartoon characters and superheroes drawn over government officials’ faces, Mary E. Mindiola’s landscapes of mountains and forests made up of chopped up magazine collage, and Alexandra Alvarez’s transcendent portraits of the Caribbean. The Venezuela Art Fair was a celebration in defiance of monolithic classification. The show closed on June 26th, but the artists’ work continues to be available online.