Robert Janz: The Poetic Beauty of the Ephemeral

This interview has been edited for concision and clarity.

Check out a collection of Robert Janz’s work at ThirdRailArt.com

T.K. Mills: Would you mind saying your name for the microphone?

Robert Janz: My name? Oh I’ve forgotten. I’m too old for those kind of details. Well, I’m Robert by day, after 6pm, I’m Roberto…. I’m not interested in me as a personality. I bore myself.

When did you first start exploring art?

Did you do a lot of drawing and painting growing up?

The reason that I like to consider myself a poet, even though my poems are quite short, is because I think that poetry is the most important of the arts. And the reason I think that is because we are undermined by the words we use. Poetry and writers in general, but poetry in particular, freshens words, changes their context and what they point to.

People are completely coerced by the language that they use, and the more that word is used, the more meaningless it becomes. Every tyranny on Earth calls itself a democracy. It’s a nice word, the Greeks invented it, but even they couldn’t practice it very well. And now, democracy means any bloody thing. “Free” is another one of those words, it can mean any thing at all. It can mean, you know, there’s no sugar in your coffee. “Love” has been used to the point where it’s just a sweetener slathered over any old poison. Poetry tries to un-wrinkle words.

And I have a poem that says that, I use alliteration for my structure: Words warp, language limits, poets pierce barriers breaking out.

Could you tell me the meaning of your poem ‘We Are What We Witness’?

Yes, that’s one of those alliterations, “we are what we witness.”

Poems are also objects. For instance, if you see you the structure of it, it’s different than when it’s sounded, because the written thing is an object, but the way that I speak it is more a riff. You know, I go back and forward.

I’m a great admirer of E. E. Cummings who found poems inside of poems, and that’s what I try to do. Song on, the on is in the song. Song on, sing in, in flow, inner flower, the words are all in-built. I think that’s important, because, as I say, words are the most dangerous invention of the human mind.

It’s words that press the red button that launches the missiles. It’s words that decide whether we’re going to exploit the world or take care of it. It’s words that decide how big a family should be. Our entire world is determined by the language and its meanings, and the meanings keep changing. Words are very fluid – it’s like trying to pick up spilled mercury. Try to pick up the word “love,” and it’s all over the place. It plays games, it turns upside down, easy. 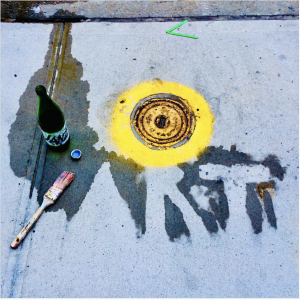 How does poetry influence your art?

So I started doing, especially on the beach, Venice Beach, California, I started drawing on the beach with a stick. At that time in my late teens, I had a very small circle of friends and we were all into Zen Buddhism. We didn’t know anything about it, but we were aficionados. We were zen-y. I couldn’t walk down the street without holding my Basho in my hand, because if I didn’t have my Basho, ‘Journey to the Interior,’ I would fall over.

Basho was a 17th century Japanese Haiku poet. Lighting one candle with another, an evening in Spring. The compression of haiku, the sound of one hand clapping, which is a zen masterpiece, was very attractive. It hovers between aphorism and parable. I don’t know. For me, the greatest zen saying is “if you have to ask, an explanation won’t do you any good.”

It’s not exactly a haiku, but I find the saying very zen, the English proverb but “power corrupts, absolute power corrupts absolutely.” And you can see this illustrated in the White House, or in the Kremlin, or in China. You know, power corrupts. People who race after power are half-alive because it’s diabetes of the brain.

When you paint with water they only last a few minutes. How does this impermanence influence your artistic thought?

When I was in my late teens, early 20s, we had the draft. I was being drafted, but I opposed the war. There was a problem, I claimed I wasn’t religious, therefore I couldn’t have the religious exemption, but on the other hand I agreed that society had to defend itself… but I didn’t agree with the war… well, anyway, I ended up in prison,

To get out of the cell, you had to take occupational therapy. And the therapist was a sergeant who had studied in Japan. He taught me how to make stoneware bowls in the ancient Japanese manner. I still have a couple of those bowls and they’re very valuable to me. But the value of the bowl is its emptiness. A bowl, you know, you can pick it up and it’s empty and that’s where you put the soup in. So that was a lesson that remained with me.

I paint positive, I draw the thing and I fill it in, but, my best work, is the opposite. The word, “aware”, the word was dry rock. I didn’t draw a “a w a r e”, I drew around it, as the drawing evaporates, the word becomes invisible. It’s still there, but you can’t see it. I like that.

And that was definitely a lesson that I absorbed from my non-comprehension of the zen masters. The title of Basho’s book ‘Journey to the Interior’ naturally meant going into these bamboo forests, but it also means going into yourself. His book is about that, it’s about going outside while inside, going inside while going outside.

There’s a wonderful story, if you’re into stories. When I was in the hills of Southern Spain, you could see across Gibraltar to the desert to the Sahara. These were high hills and there were still, at that time in the 60s, wild goats jumping from rock to rock. And one day I was walking along, I got lost, and I saw a farmer over there, these were desert farmers, rock farmers, you know, very poor, very emaciated. I went up to him and I said, “I’m lost, how do I find the village?” And he said to me, “ah Señor, from here you can’t.”

Contrast that with the story in Basho. Basho is lost in the bamboo thickets and he sees a farmer. And he goes over to the farmer and he says “I’m looking for the ancient shrine.” And the farmer says to him “oh you’ll never find it. The bamboo thickets have many paths, you’ll get lost. But you see that horse over there? Go take that horse, that horse will lead you to the shrine, and when you get to the shrine just turn the horse around and it’ll come back.” So Basho holds onto the mane of the horse and the horse takes him to this pile of rocks that’s in bamboo. To me, that is the wisdom of Japan summed up in one story.

Nothing is permanent, nothing you can look for can be found.

“The world is a garden; we are the gardeners. We’re not supposed to be chopping down all the trees.”

Yes. My theory is that every tree, tries to be a best tree. Or my cat tries to be the best cat. Life tries to do its best, it tries to cope. Humans are the only creature that seem to not try to be fully human.

We have a big brain for a reason. The universe tried very hard to create a nice planet for life to thrive and tried very hard over millions of years to produce a creature that had a big brain that would take care of it. We’re not supposed to be exploiting it. Business is fine, ego is fine, you should take care of yourself and we have to be egotistic and selfish to an extent, but we have to be in balance.

The emotional side that causes some egotism and exploitation and trying to win all the time is a half brain. The full brain tries to regulate, it tries to maintain balance, okay a bit of egotism is fine but what about care? Lounging around in bed in the morning is great but how about responsibility?

The world is a garden; we are the gardeners. We’re not supposed to be chopping down all the trees.

How long have you been living in New York?

And always in this part of town?

No, I bounced around a bit, but mainly here, and it was just by chance. A friend of mine had a space in the neighborhood. It wasn’t TriBeCa then, it was just the triangle below canal street. They tossed all us artists down here, you know, throw them into the triangle below canal street. So I wound up with a very chic place, and my friend Max who I lived with moved on, and Pat came in, and then Pat became a Buddhist nun and went to Shangri-La or wherever it is… and I was left with this dumb place. And now the landlord is going nuts trying to get rid of me.

You’ve lived a very full life, and done quite a bit of traveling. Is there any place you still want to visit?

I’m more interested in internal travel at this point. The problem with traveling is that every spot on Earth now crawls with tourist buses. The number of times people have told me “oh we visited Stonehenge, it was very disappointing, the rocks are smaller than the tour buses.”

“That’s a water drawing in the park, and it dries, and as it dries the word becomes invisible. And I sit here and I become invisible.”

Do you like to sit in this park and meditate before you paint?

This one piece, on my Instagram, sums it up as far as I’m concerned. It’s a water drawing, but it’s a word. It says, “ideas.” That’s my attitude. That’s a water drawing in the park, and it dries, and as it dries the word becomes invisible. And I sit here and I become invisible.

“That’s a water drawing in the park, and it dries, and as it dries the word becomes invisible. And I sit here and I become invisible.”