UP5 Preview - The Irony of Becoming Iconic: An Afternoon with Ron English

I first met Ron English in September 2021, at his solo show at Allouche Gallery, right across the street from the Whitney. The event was the sort where a lot of wealthy people gather at the opening, with the excitement and consequent long line you might expect for a Supreme event, despite the crowd being older. The show represented a typical English event these days, though if you’re familiar with his career, you know that in his early days, English got his start with a punk-rock attitude, eschewing the traditional gallery world in favor hard-hitting billboard takeovers and a DIY ethic. At the show I was able to secure a studio visit with the artist.

I wasn’t sure to expect when I arrived in Beacon, where his home-studio is located. I had exchanged information with his wife, who picked me up from the train station. Before I knew it, riding in the car through the beauty of Beacon in the Fall, watching trees and elegant houses as we breezed through the suburbs. I wasn’t sure if this would be another one of those artists that got big and forgot where they came from, unable to connect with the people. I was very pleasantly surprised to find both the artist and his family were hospitable and their home free of pretense.

Entering their living room, I saw it was covered with all his toys, from years of merchandising his characters into figurines, some of which were collaborations with celebrities and political campaigns. My reservations fell away as I realized this was an artist who truly believed in their work. His wife brought me down to the basement and I entered the world of Ron English’s mind. The room was full of partially-made pieces and fully-formed ideas, bits and parts of material half-completed yet so colorful they left me in wonder. I was led out to the deck and there was English, painting a giant banner of a trippy turtle, one of the characters I soon learned he had been thinking about and creating a whole life story for, for over a decade. 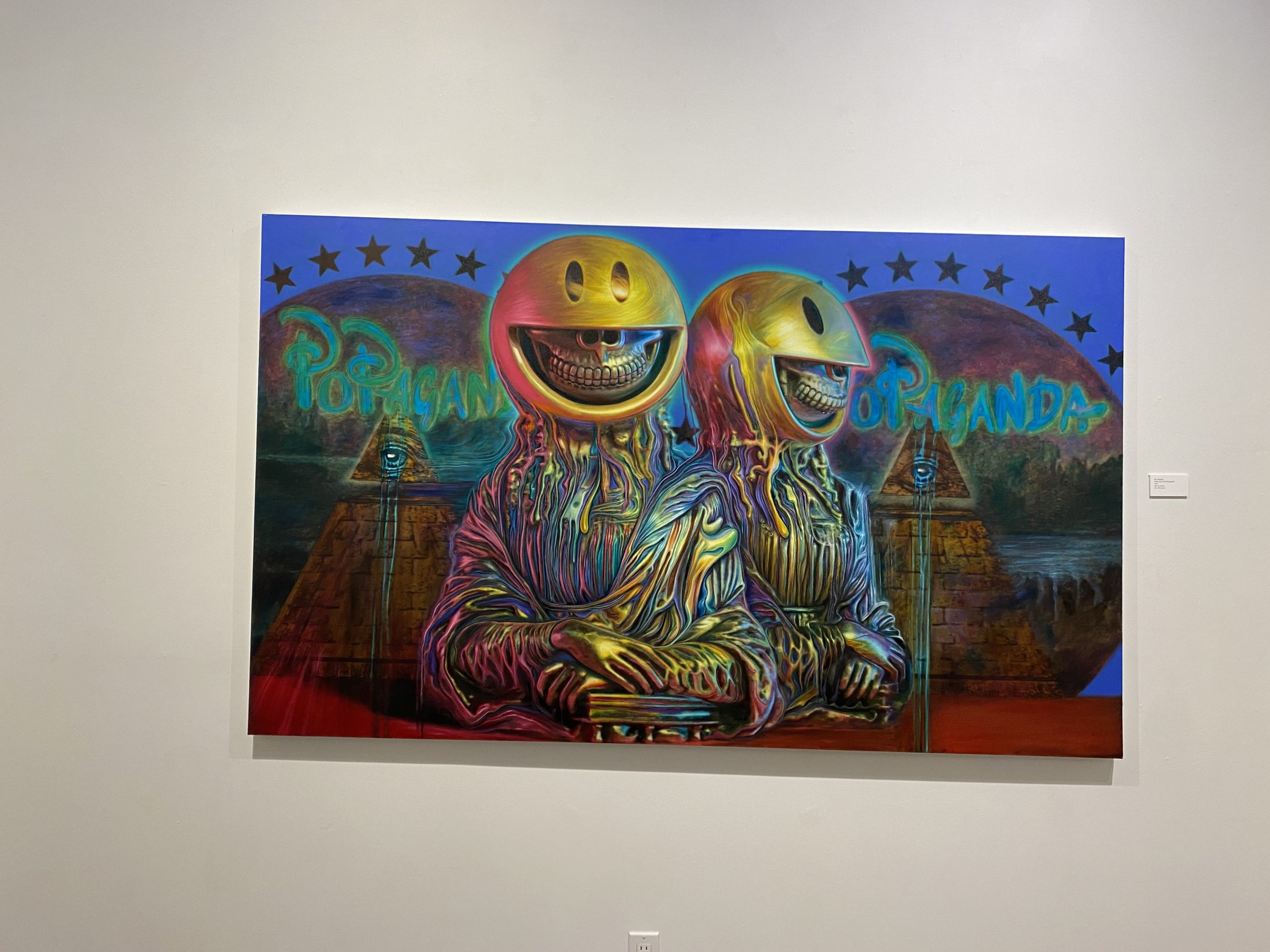 English got his start with a punk-rock attitude, eschewing the traditional gallery world in favor hard-hitting billboard takeovers and a DIY ethic.

If anyone knows me, I tend to talk a lot when I get nervous. I didn’t know how our interview would go, but I learned during my 3-hour conversation with the artist that I was able to ask him anything. It’s worth noting, I like to ask questions that maybe not everyone would want to ask, like what was it like to be living in the 70s with the threat of being drafted, or do you remember Reagan, or what was it like at Woodstock 94, or the million other thoughts racing through my head. But it started with a question that the artist had for me:

Ron English: How long is the article?

Alexandria Deters: Well, first, you must understand that my questions for interviews in general require long answers. I’m one of those writers that will ask my editor to cut my own intro, to make sure the artist’s words don’t get cut, because I think that’s important… which is why I like to do my interviews in person.

English: That’s another weird area. The first-time people started doing these articles by email, I thought how the fuck do you know that you are emailing me? Yet, if you make something easier, people are going to always take the easier way. It’s human nature. They’re trying to figure out all this digital stuff. And my question is, does it make it easier? 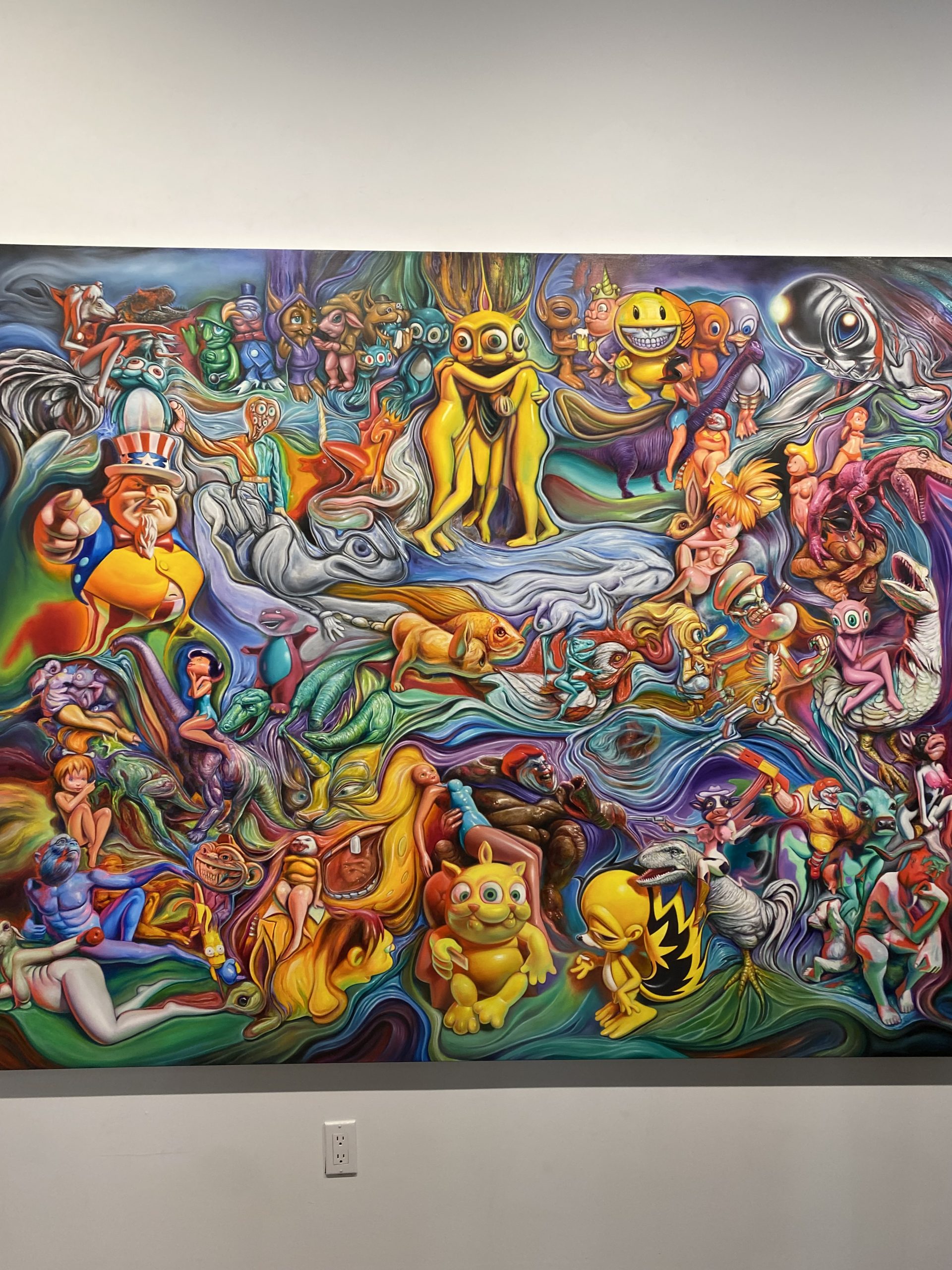 If you know me, or if you know any artist, we like to do things the ‘hard way.’ The interesting way, the new creative aesthetic way. To understand English’s own world, his own personal art language and iconography he has created and is continuing to evolve, I knew I had to go back to the beginning.

English: I had characters in high school. I was on the school paper and of course I got kicked off. But I started pushing the characters because at first my work was antagonistic to consumer culture. I used Mickey Mouse and icons of consumer culture. But I think maybe at some point it hit me that painting Mickey Mouse screws me, because you can’t license anything with it. And then I bet there’s a million possibilities that are open to somebody who has their own characters. 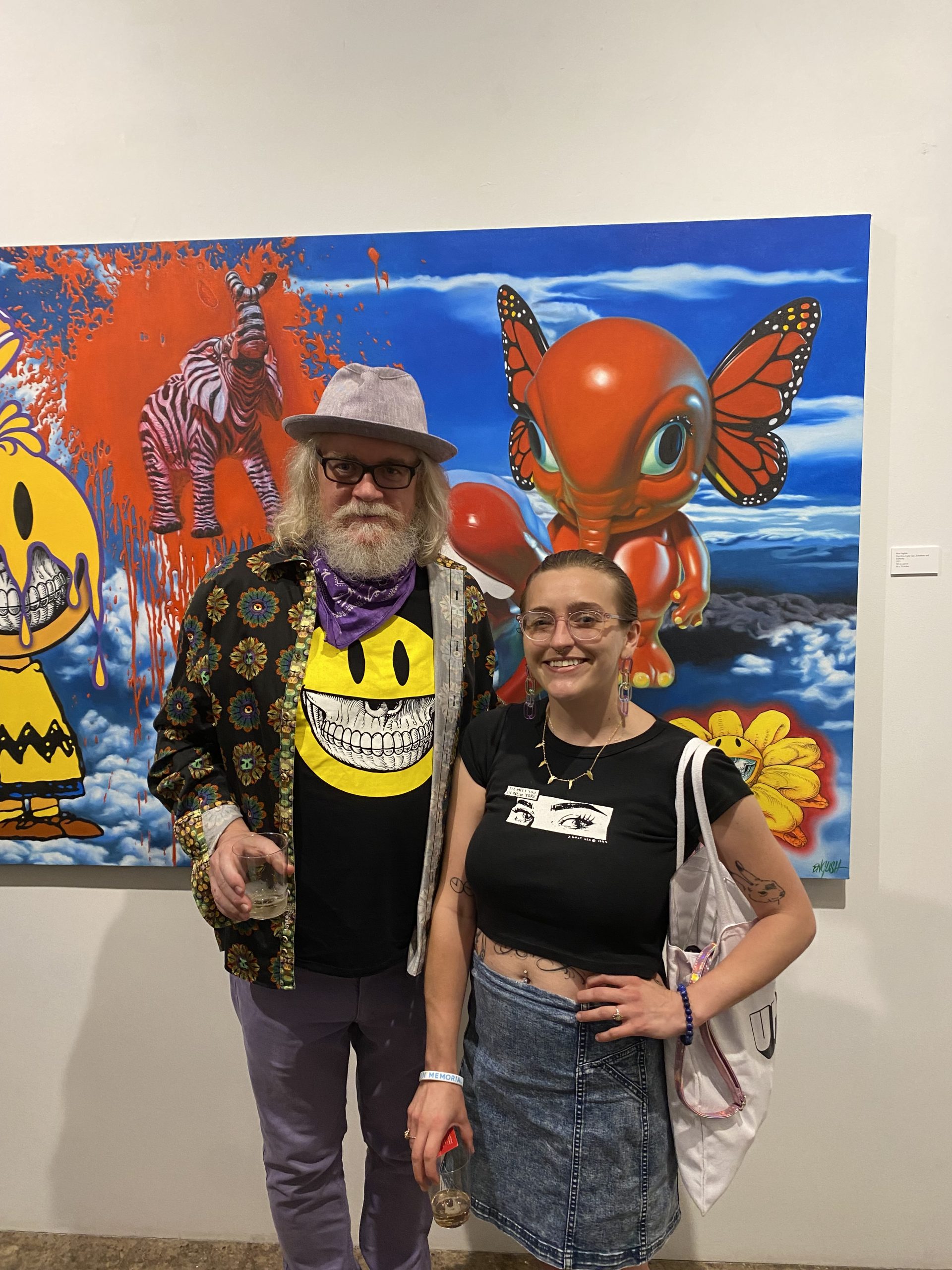 “I used Mickey Mouse and icons of consumer culture. But I think maybe at some point it hit me that painting Mickey Mouse screws me, because you can’t license anything with it. And then I bet there’s a million possibilities that are open to somebody who has their own characters.”

The conversation naturally progressed through his formative years. Leading inevitably (for me) to a discussion about identity, sex, and sexuality as any discussion about those years does. However, it took an unexpected turn. In comparing our upbringings, I revealed my personal story that in 10th grade I was outed to my parents by my therapist. English in turn shared his own personal experience with queerness. While comfortably heterosexual himself, when his sister came out, ironically enough it was HIM that helped pave the way for his sister’s acceptance.