Is Roosevelt Island Manhattan, Queens, or both? The geographic answer is Manhattan, but the former smallpox quarantine center island under the Queensboro Bridge has some of the high-rise hipster glam of the Queens waterfront and mixed with the abstruse old New York-cum-new money of the Upper East Side, and The 2020 Roosevelt Island Fall for Arts Festival, themed this year around Social Justice: Reclaiming Our Time is just as multifaceted as the island it’s on.

Since 2005, Community Affairs Director Jessica Cerone and the Roosevelt Island Operating Committee have teamed up to select a theme that’s relevant to the community and inspiring to the art world at large. In Cerone’s words, this year’s theme “stems from Rep. Maxine Waters’s now famous ‘reclaiming my time’ statement, which went viral after the California Congresswoman spoke during a House Financial Services committee hearing last July.” If there were ever a year to discuss social justice, 2020 is it.

Outdoor events like the Fall for Arts Festival may be the future for art exhibitions given the CDC’s recommendation to hold cultural events outside. Plus, Roosevelt Island is no stranger to pandemics. The island was once a smallpox quarantine stronghold in which incoming immigrants to New York who hailed from smallpox epicenters would isolate alongside New York residents diagnosed with smallpox. There is something both eerie and comforting about a place bearing this legacy in the COVID-19 era. Along with the murals, island-goers can visit the historic Smallpox Memorial Hospital, an abandoned building covered in ivy. Meanwhile, the murals at the Fall for Arts Festival, stationed at Southpoint Park and the Meditation Lawn, provided a look forward.

There is something both eerie and comforting about a place bearing this legacy in the COVID-19 era. Along with the murals, island-goers can visit the historic Smallpox Memorial Hospital, an abandoned building covered in ivy.

One of the big advantages to an open-call mural festival like this one is that there is no minimum age, allowing for artists like local Roosevelt Island middle schoolers, Mica, Hawa, and Milica. The trio worked together to paint powerful figures in social justice: Malala Yousafzai, Greta Thunberg, Frida Kahlo, Madeline Stuart, and Marsha P. Johnson as a representation of different facets of activism. Though each artist or artist group interpreted the theme differently, all drew from both historical figures and dreams for the future.

Erica Spencer-El, Director of Communications at the Roosevelt Island Operating Committee, who put together a mural for the youth center entitled Hate Has No Home Here, said that “this is [my] favorite event by far. it’s always great to see who’s done what and what energy they bring.” Director Jessica Cerone sought artists “who best reflect the theme and have a message to share with their art,” a strategy which allowed experienced muralists to share the day with newcomers. Every artist approached the theme from a different angle, but each had their own artistic background and unique set of skills.

Ching-Wen Tsai and Pablo Caviedes, from Taiwan and Ecuador respectively, were no stranger to large-scale murals or installation art. They had previously collaborated on an outdoor exhibition called Appropriated Intentions in Inwood Hill Park, at the site where the Lenape originally purchased Manhattan Island from Dutch settlers, and Tsai, who is originally an advertising designer by trade, looks to incorporate the principles of design. Their mural, like Mica, Hawa, and Milica’s, also used a social justice icon to convey the message, memorializing the date of Martin Luther King Jr’s “I Have A Dream” speech. In their statement on their piece, Tsai and Caviedes wrote “History teaches us to correct our mistakes so that we do not repeat them,” and described the speech as a “vindication towards human rights.”

“History teaches us to correct our mistakes so that we do not repeat them,”

Muralist Simply Chaotic, whose art station was loaded up with cereal bars and donuts for any hungry artists, had incredible familiarity with the form due to working for a mural company. While a student at Fashion Institute of Technology she “hated the competition and wanted a sense of community.” In her own words, the hyper-competitive environment of higher education “made her go ‘ew.’” A friend pitched the mural company to her, and Simply Chaotic has been muraling ever since.  Her piece was inspired by “Buddhism and the lotus flower and the symbolism within that, lotuses float among murky waters and based on that I thought about what kind of time we’re in, the tranquility of the lotus floating through the murky waters.” 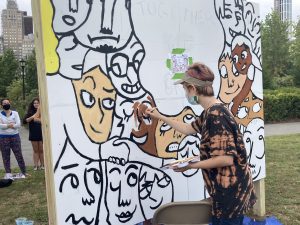 Simply Chaotic also featured broken chains underneath the lotus flowers, which she stated represented the failures of the socio-political system, especially when it comes to police reform. “In this world, there are so many lilies and lotuses and so many tangled roots underneath them.”

“In this world, there are so many lilies and lotuses and so many tangled roots underneath them.”

At Southpoint Park, engineer turned multi-media artist Gianna Curcio took inspiration from the island’s namesake. Her mural is inscribed with a quote from Franklin Delano Roosevelt himself: “We know that individual ability has never existed and never will, but we do insist that equality of opportunity still must be sought.” Curcio’s piece features a key ring with food, education, safe space, care, and respect inscribed on each of keys. “Each key on the key ring represents a resource that people don’t have access to – the missing piece is the human factor that will help unlock the opportunity for those things,” Curcio said. “I tried to figure out what symbolism you could use without putting the human form with it – I wanted to make it about access and opening doors of opportunity since that’s something a lot of people from different viewpoints can agree on. Curcio was flanked by friends and family from the homey Westchester suburb of Hartsdale, her father running to grab coffee for her family and her husband fetching her paint. It wasn’t her first time participating in the festival, and she had encouraged her friends to apply, because it’s “so inviting, and makes people feel really welcome.”

One of those friends was Alex Patrescu, a soft-spoken Purchase College graduate whose piece focused a message of unity through the image of chakras on two bodies merging together. “It’s not as intimidating to do murals here because you have this huge landscape all around you,” Patrescu said. It was her first time attending the festival and her first time painting a mural of that scale. “I wanted to make something less overtly political, to say that there are two sides of us that we don’t always accept and tend to blame or externalize,” she continued. “My parents grew up in a communist country where difference of opinion wasn’t allowed, so I want to focus on mediating and unity.” Patrescu was not the only newcomer to the festival. 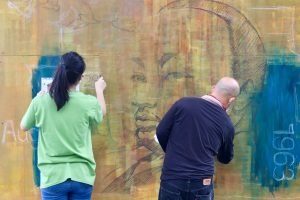 Brooklyn high-schooler Mimi, donning a sun-visor and tie-dye shirt as she painted an intricate display of faces with the message TOGETHER WE GROW in the center, had also never painted a mural before, but seemed completely at ease with her work. “It’s nice to just get to stand here and not think about schoolwork,” Mimi remarked. The fact that the Fall for Arts Festival is open to all ages means that many of the artists were high-school or college-age, and a huge variety of talent come to the table. Lara Jordan, a student who grew up on Roosevelt Island, traveled all the way back to the city from Clark University in Massachusetts to paint her mural, a complex and colorful piece inspired by Mexican indigenous art. Jordan painted two children, “one black and one white, but they’re both transforming into beautiful birds to represent potential. But there’s a chain around the black kid’s leg representing the struggles of black peoples all around the world.” Jordan was inspired by the Latino artists Edgar Flores/Saner and 6cix mugres krew to use masks and headpieces. On the theme of social justice, Jordan said that “it’s 100% the most relevant thing and always the most important thing.” While filling in a toucan’s wing with navy blue, she mused “I just felt really happy that I had some sort of outlet to be able to show how I feel about it and convey a message. You don’t need to use words.”

On the theme of social justice, Jordan said that “it’s 100% the most relevant thing and always the most important thing.”

Also representing Latin America were Joselin Skotiuk and Gustavo Adolfo, professional artists from Venezuela, whose mural used different-colored stripes to represent the LGBTQ community and a multi-headed, multi-racial form to show all cultures coming together. Adolfo and Skoliuk met at the same illustration institute, and their mural centers the text. Their mural has the phrase “We Are One” in 34 languages, and rather than using Google Translate, Adolfo and Skotiuk asked friends and friends-of-friends to contribute how they would interpret the phrase in their mother tongue. “I work in real estate, and most of the people in my office are immigrants” Adolfo said. “Just in my office from the property manager and the associates I was able to get Polish, Tagalog, Hindi, Punjabi, Urdu, Russian, and Hebrew.” Adolfo and Skotiuk, their work ethic, and their industrious, multi-layered approach to muraling speaks to the spirit of the Fall for Arts Festival. Most artists spent about five to seven hours on their pieces, but for the artists on Roosevelt Island this fall, the message was more important than the process, especially with the poignancy of this year’s theme. “We want people to see ‘We Are One’ on our art and think, that’s my parents’ language, that’s my grandparents’ language, that’s my language.” Adolfo said, smiling as he completed a translation into Russian. 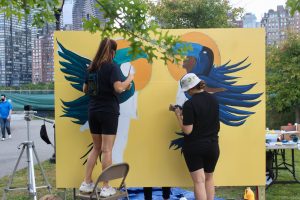 Social justice movements have to walk a complicated line between honoring individual identities and promoting unity and solidarity. Broad messages of unity and community run the risk of erasing the voices of the underrepresented but narrowing the focus too far into individual social identities can create divisions and distract from solidarity. The Fall for Arts Festival was a refreshing look into the diverse ways positionality can affect interpretation of social justice – different generations, different nationalities, even different New York neighborhoods. Lifelong Roosevelt Islanders, Inwood and upper Manhattan, North Jersey, and Bushwick all brought unique perspectives to the festival. It’s easy to fall into believing social justice only means one thing, and the Fall for Arts Festival actively challenges that assumption. There’s something poignant about an island that’s a living reminder of a past pandemic as a hotbed for discussion around social justice. The Smallpox Hospital, designated as a historic landmark, sits right beside the Meditation Lawn where high-school artists and long-term muralists alike in cyan-colored surgical masks, paisley-adorned cloth masks, and white foam KN95s painted murals together. Skotiuk, shrugged when asked about whether the pandemic had made the festival feel different. “The only thing that’s really changed is that people wear masks now.”

Social justice movements have to walk a complicated line between honoring individual identities and promoting unity and solidarity. Broad messages of unity and community run the risk of erasing the voices of the underrepresented but narrowing the focus too far into individual social identities can create divisions and distract from solidarity.

Like social justice, the pandemic is something which demands both an emphasis towards larger unity and an acknowledgment of individual circumstances. Both the art world and the world at large are inexorably different, but some things, like community advocacy, the necessity of the commitment to social justice, and the unique ability of art to uplift a message, will always be the same. Most New Yorkers, artist or not, are mourning what’s lost, but for eight hours on Roosevelt Island, the focus wasn’t what we’ve lost but what we can create.