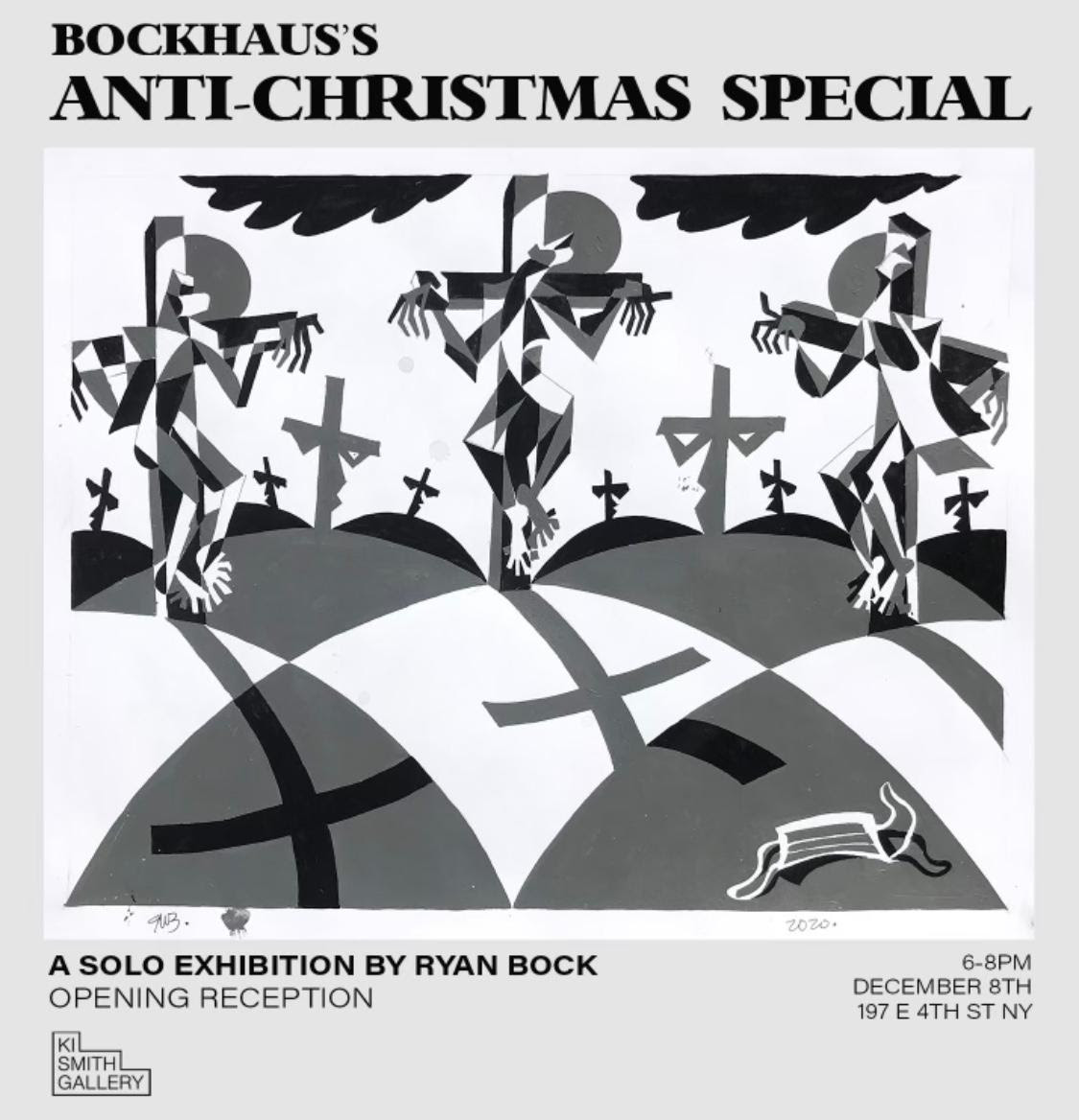 In a country where the impending winter “holiday season” is synonymous with Santa Claus, Christmas carols, and consumerism, Bock encourages the viewer to challenge the status quo. This exhibition is an anti-celebration. It is an astute observation and a protest to the White Christian hegemony that has molded the United States since its inception. Through his artwork, Bock reconciles his complicated relationship as an observer. His artwork is a vehicle of accountability, a responsive visual diary, and an appeal to alternate pathways of truth-seeking.

Bock draws from his lived experience, transmuting personal and collective trauma using gouache and acrylic. His research-based approach references news media, pop culture, and conspiracy theories. The viewer is urged to think critically about their role in sourcing facts and parsing truth.

The humor of Anti-Christmas Special is dark and its execution is exact. Menacing figures are rendered in Neo-Cubist forms. Recurring characters such as The Silver Fox take centerstage, emerging from an evening news nightmare. Corrupt political figures are portrayed alongside their animalistic counterparts, connecting the continued repercussions of imperialism, racism, and classism that ripple and rumble through the current United States political landscape.

Works such as Christ Handgun (2020) relay a failed separation of church and state in the US. In a political critique that borders prediction, Bock references the cyclical history of human conflict. Navigating the Halls of History (2020) mimics a scene allusive to the 2021 attack on the Capitol Building and to a pattern of storming parliament buildings that extends to antiquity.

The Bock Brick Benefit undergoes a rebirth from 2018 to compose an interactive portion of this exhibition. Lining the base of the gallery walls, the installation is intended for eventual deconstruction. Visitors are encouraged to purchase a hand-painted brick as an anti-Christmas Bockhaus gift. A nod to revolution and communal effort, the wall is built and dismantled “brick-by-brick.” A percentage of proceeds will support the American Civil Liberties Union, a non-partisan non-profit organization, which has defended and preserved the individual rights and liberties of US residents for the last 100 years.

Ryan Bock is an American artist who lives and works in New York City. Ryan Bock specializes in painting, drawing, puppetry, animation and experimental film methods. Bock’s practice is rooted in a need for narrative structure. Residing somewhere between mythology and nightmare, Bock depicts mise-en-scène riddled with symbology and allusions both cinematic and painterly. Maintaining a fascination for shape, shade, shadow, structure and optical illusion, Bock deconstructs his subject matter into often barely-recognizable delineations and structurally unsound repetitive patterns. In an attempt to confront the contemporary individual’s relationship to mortality, fear and superstition, Bock depicts correlations between the human figure and its innovations: technology, architecture and religion—both historically and fictitiously. By consistently contrasting historical subjects with those of the present, and using the recurring patterns found to generate predictions about our future—a process he refers to as ‘dusty futurism’—Bock propels his audience to reconsider the routine human experience and discloses the illusions implemented to keep them from questioning.

Since receiving his BFA from the School of the Art Institute of Chicago, Bock has shown at numerous galleries both nationally––New York, Miami, Dallas, Chicago, and Oakland––and internationally in Paris, London, and Prague, including seven solo exhibitions. His work has also been featured in group exhibitions at Christie’s New York and the Honolulu Museum of Art. During his time with Apostrophe NYC’s Base 12 Project, he participated in exhibitions at the Whitney Museum of American Art, MoMA PS1, Coney Island’s Luna Park, Mana Contemporary, and the MTA’s Kosciuszko Street J train Station. In 2019, Bock’s installation at SPRING/BREAK Art Show, and subsequent solo exhibition Somnambulist were featured by Hi-Fructose Magazine, ARTnews, Observer, and artnet News. He currently shows with Ki Smith Gallery and Ground Effect (Paris), and has works in several prominent private and public collections.

Ki Smith Gallery disrupts standard industry practice by representing a carefully-selected group of artists with diverse backgrounds, methods, and aesthetics. Our artists are encouraged to explore materials and processes and we actively support them in making exciting new works. We immerse ourselves in each exhibition from conception to execution.

The gallery works closely with our collectors to help them create meaningful collections. We take pride in helping them not only understand the intentions of the artist, but also consider their own personal and emotional connections to the work.

Although we take the larger trends and conversations of other galleries and auction houses into consideration, we consider our peers to be the artists, patrons, and friends that are active parts of our community. We are compelled by a deep love and respect for art and are always searching for imaginative ways of sharing it with others.