I hadn’t seen Savior ElMundo since the day of the UP Launch, so I knew our last conversation was on June 20th, 2019, exactly. When we made plans to meet, he directed me to enter La Esquina on Kenmare Street, and to “tell the guy at the front” that I was meeting him downstairs. Perpetually twitchy in the face of uncertainty, I entered the restaurant on a mid-October evening and loudly asked the girl behind the counter where “downstairs” was. She directed me to a nondescript steel door.

Through that portal, I descended through winding catacombs to find a decadent underground watering hole. Savior settled into a couch, next to me, shortly after. He told me how this spot had once been a hideout for celebrities in the 90s, a place where they could act like normal people, because it was unknown at that time. There, he’d moved amongst the era’s stars due to his connections as a dancer. “Excellent,” I thought to myself, “I would have completely blown their cover.”

Savior El Mundo is cool in a way I could never feign.

He grew up in NYC at the height of the artistic explosion that took place throughout the 80s and 90s. He began to move in the music and fashion industries at age fifteen. Eventually, he synthesized these experiences into his current art career. That artistic career will culminate into a new phase with his first solo show at Salomon Arts Gallery in TriBeCa.

The opening reception for Savior’s show will take place on Wednesday, October 16th, 6-9PM, and the event requires an RSVP. “You know why I’m doing it Wednesday?” Savior asked during our conversation, “because I’m about to kick it off, because Thursday, everybody’s doing fucking art on Thursday.”

He’s that kind of guy, enthusiasm and pioneering spirit pouring out from each pore. His solo show centers around his 3-D letter works, for which the artist is most well-known. The event’s information explains, “from my perspective, life is bold, it’s in your face, it’s loud, and it demands your attention. My 3-D Letter Show is an extension of my beliefs and the multi dimensional world we exist in. The 3-D letters are impactful, powerful, and undeniable. Read it, take it in, and let it inspire you whether through nostalgia or in the moment and let it carry you into another dimension.”

Savior began creating his trademark 3-D letter pieces around 2015. He showed his first completed work of this variety at a group show in Brooklyn that he curated, themed ‘religion meets street art.’ Each participant offered their take on blending the two, and Savior created a 3-D work that proclaimed “art is my religion.” Smiling, he told me, “I was the first one to sell it.” A lightbulb went off in his head, and he decided to try another one. “It sold again. “

“Every artist, they do so many mediums, they don’t know what’s gonna be their signature,” he explained. Savior struck gold through simple trial and error. “I ran with it and then I knew, I was the only street artist that was doing letters.” He began putting out teasers to lay claim to this new innovation. Through this action, he hoped to tell people, “don’t take it away from me, don’t try to copy me… And in the street art community, they already knew, ‘Savior’s doing the 3-D letters. That’s his thing.’”

When Savior found that crucial component, he knew he would eventually build the body of work to warrant a solo show, but it took time. “I never really touched it,” though, he said. “I wasn’t ready. I looked up all the street art shows- I’ve done fucking 80 street art shows, group shows since 2010. It’s crazy. But I never did a solo show. I wasn’t ready. I was building my collectors, I was building my clientele.”

By 2017, he knew he would soon be ready. He began actively planning Wednesday’s event in 2018.

The show will feature twelve pieces, all 36” x 60”, “that’s one of my favorite sizes,” he said, “it could be a big house, it could be a nice, big apartment… it just looks right.” And then he’s also featuring three installations, two doors, one of which is from an exclusive show he participated in on the 69th floor of the World Trade Center, tower four. “I did a door that says ‘always in our hearts 9/11. It was a tribute to 9/11 I did. So the letters’ coming out the door, and the other side was a whole collage of New York City,” he intimated.

Savior isn’t the kind of person to make decisions without thinking.

Savior told me the door was featured by Gothamist and New York Times. “The only problem,” he continued, “was that the public couldn’t go up and see it. It was only private to the collectors, the buyers, the people from the World Trade Center, celebrities, for that opening that was only private. And the only time that people could come see it was with me.” This is the first time that the general public will be able to see that piece. “That’s your chance to come see this door.”

Savior isn’t the kind of person to make decisions without thinking. I wondered why he chose Salomon to host his debut solo show. He explained that the owner, Rodrigo,“his story’s ridiculous.” The two became acquainted due to their mutual involvement in the art world. “He was a photographer, a filmmaker, he landed in New York in the 70s, met another established artist in the New York scene,” who knew influential artists like Keith Haring, “so they used to go up there and hang out at that space. It has history, so what a perfect history for me to be in. I’m gonna be the first street artist to do a show there, and now he’s gonna keep doing street art shows.” Previously the gallery only dabbled in fine art, even hawking pieces by Picasso, according to Savior.

I mused over the magic of New York City. This place is so small that it verges on incestuous, and perhaps the real benefit to being here lies in the fact that the odds of something significant not happening are lower than the odds of it actually happening. With such a saturation of successful, creative people crammed into one compact space, opportunities like Savior’s connection to Rodrigo abound. When you pair that with focus like his, you can manifest meaningful developments in a snap.

Since Savior has had his eye on this prize for so long, I was curious to know what he hoped to get out of it – for himself and others. “Definitely we need to make some fucking money,” he laughed, a bonafide New Yorker to the end. “That’s first priority… All artists gotta pay rent, we gotta take care of ourselves. But besides that, even if nothing happens, I’m just glad to do it. That’s worth more than money to me, that I did it.” Regarding attendees, he remarked, “I want people to interact with my art, I want people to be like, ‘wow, this is different, these 3-D letters coming in my face’, and the history behind those letters, the meaning, because there’s a lot of collages of the history of New York City.”

That history, in his work, is often conveyed through the language of brands, and viewers will find references to Nike, Chanel, and Supreme, to name a few. “I know the owner of Supreme,” Savior said. “He used to give me t-shirts. He knew I was in the hip-hop industry, and I would be the only hip-hop kid wearing Supreme, dancing hip hop, because that’s a skater brand. People in hip hop would be like ‘where’d you get that shirt?’ I’m like, ‘go to this store, and say Savior introduced you to this.’ So they’d go to the store and buy tons of fucking shirts, these hip hop guys that got money.” The owner kept giving him more merchandise to pimp out. “I was like the non-skater, walking billboard. Basically, I was the Supreme dancer, since the 90s.” At his opening though, you can find him in all-black.

He espouses the magic of having a protective barrier between oneself and the press.

Our interview was the first time I’d seen him without sunglasses. I asked if he’d be donning the shades the night of the show. “Yes, definitely. Because the cameras, the people talking to me… it’s just so much shit.” He learned the trick from Andy Warhol. He espouses the magic of having a protective barrier between oneself and the press.

I’ve toyed with the idea of sunglasses myself, but I rely on the draw of my bright green eyes to help me weasel out of embarrassing situations, because I frequently run my mouth too loud like I did on the ground-floor level at La Esquina. Listening to Savior’s story, the way he set his sights on this solo show and used focus to bring it to fruition, I solemnly swear to stop telling myself I’m not cool. Words have power, and I want to focus on being able to hang. You can find me at his show on October 16th, eyes exposed, all the better to share my better assets and to allow his 3-D words to jump out at my face. 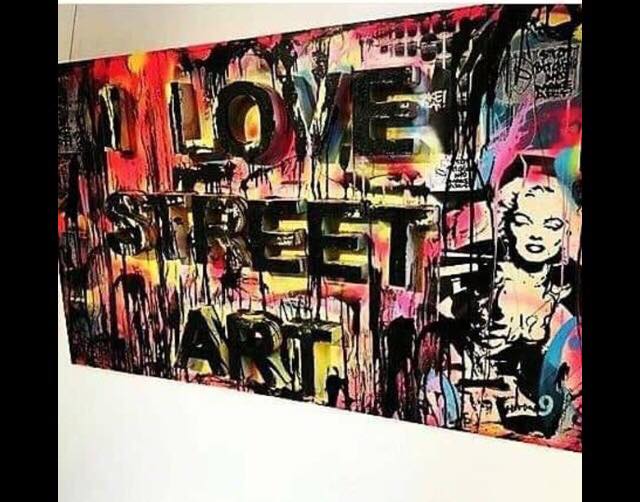 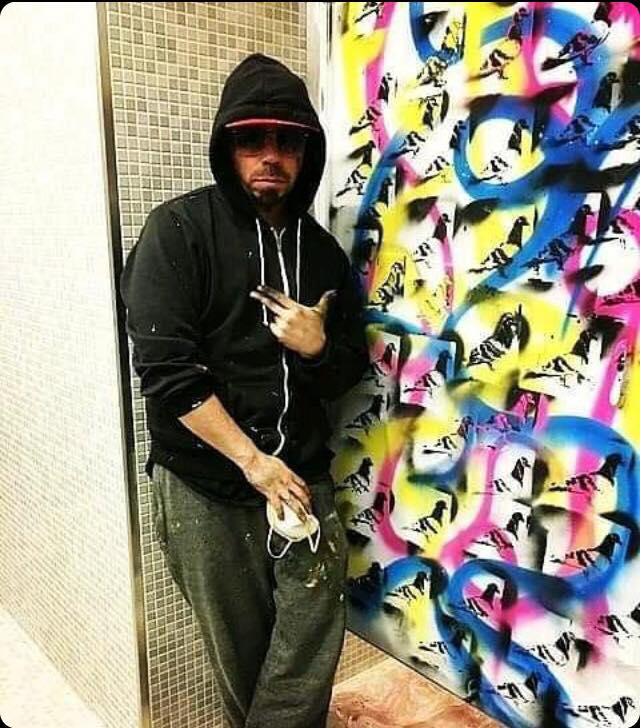 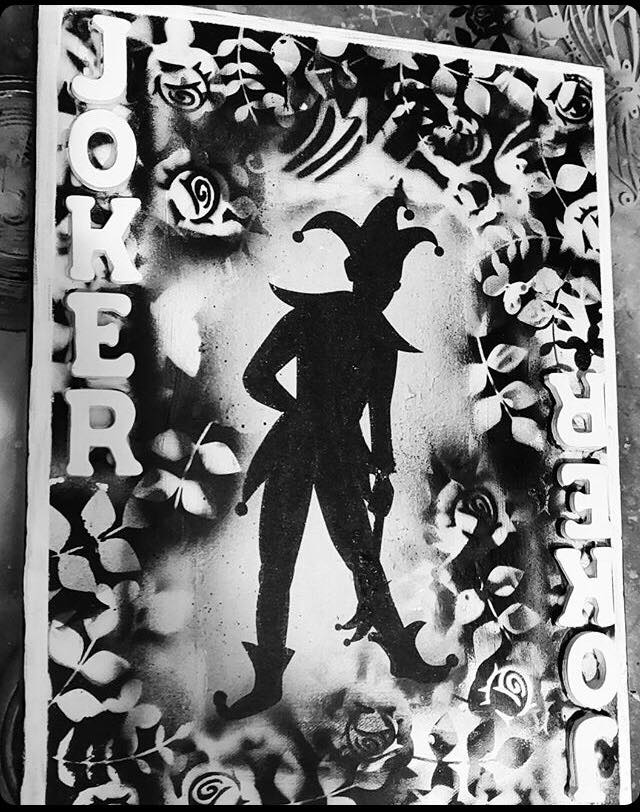 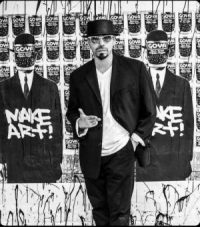 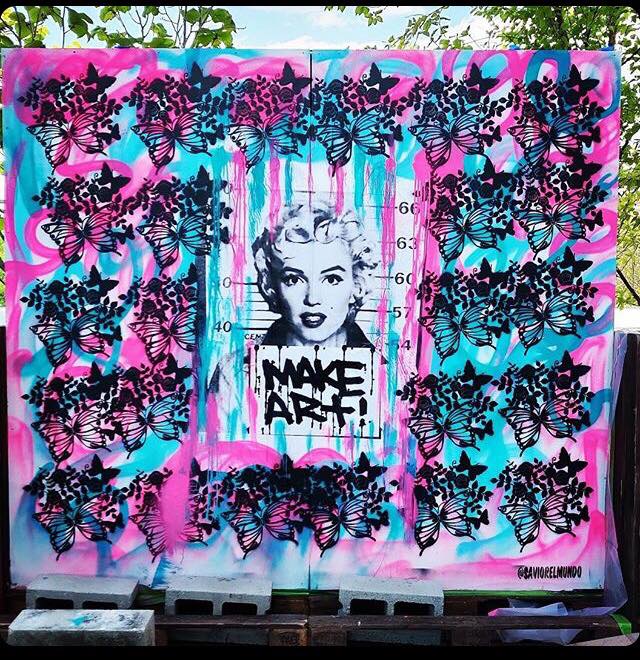 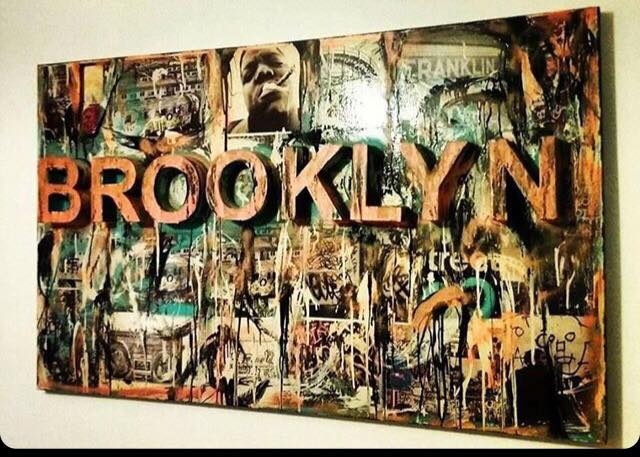 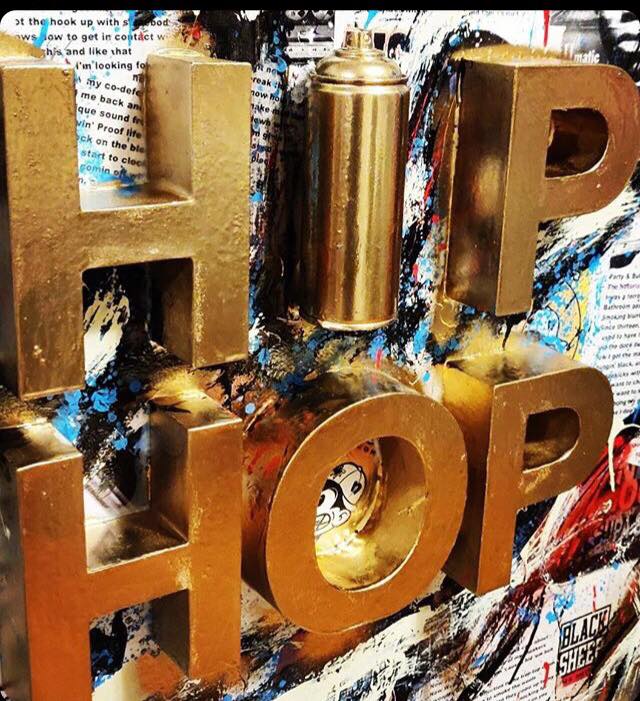 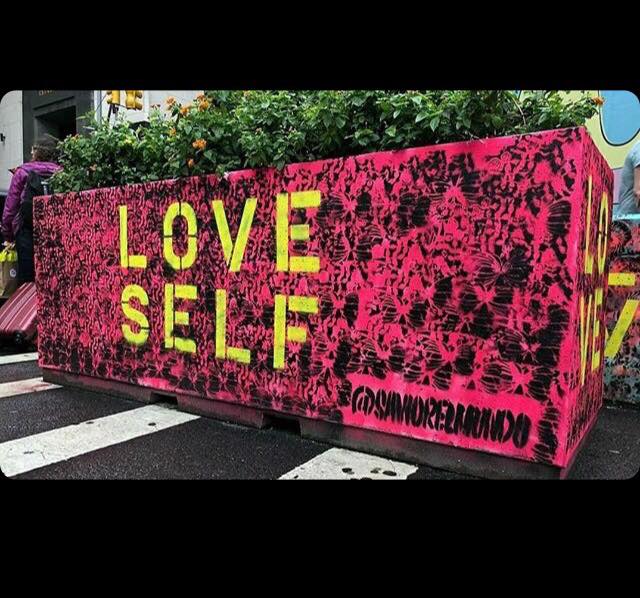 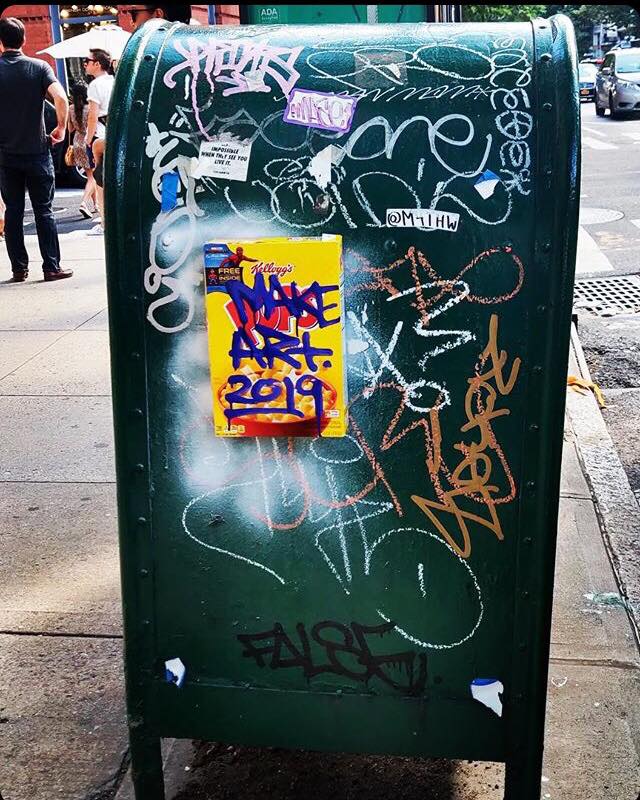 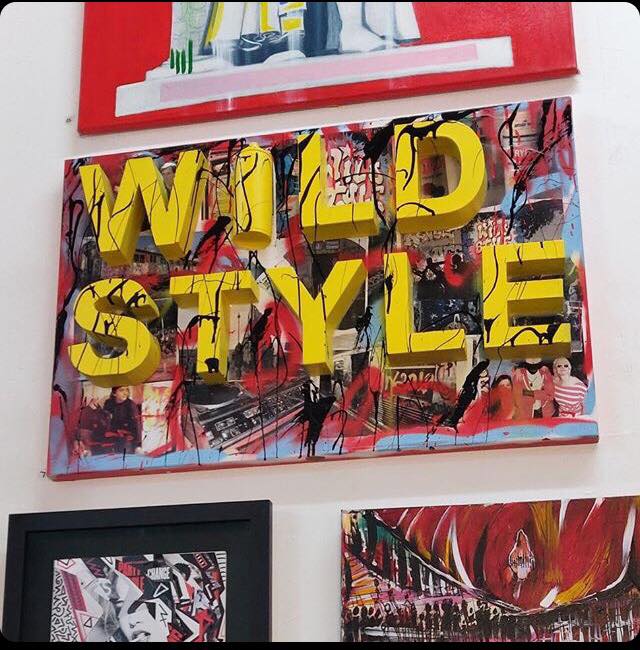 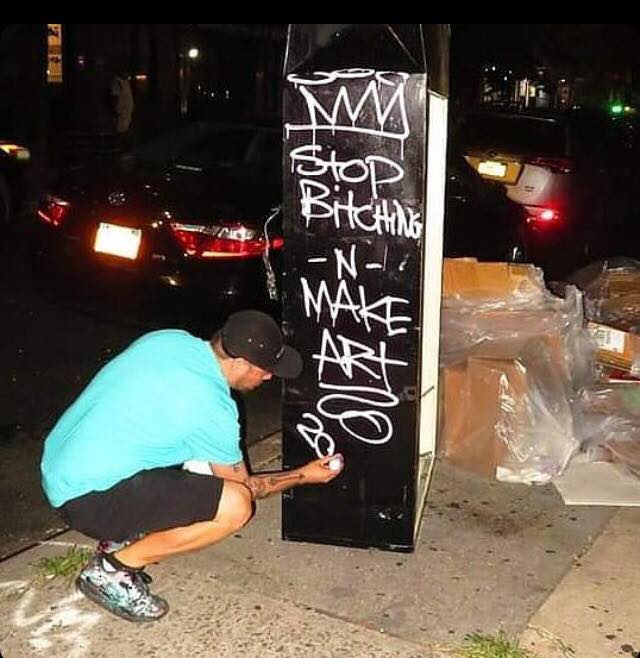 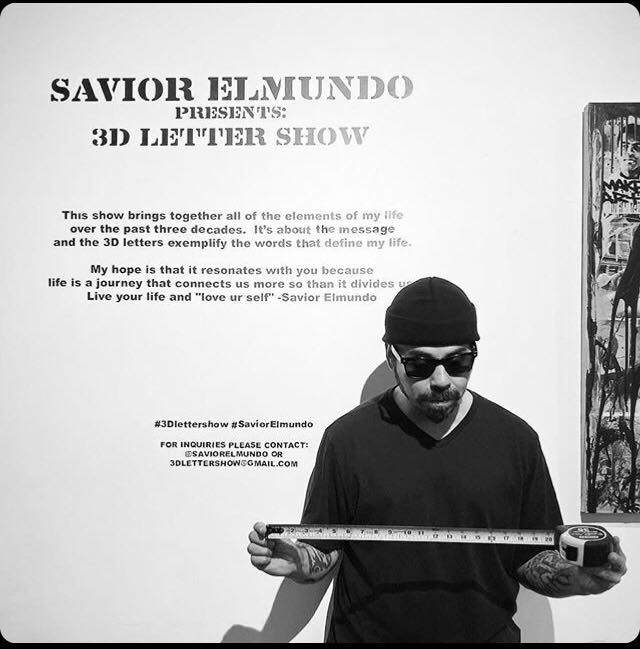