John Fekner’s Charlotte Street Stencils show a crumbling building in the South Bronx, its empty windows like gaping black eyes, and the text BROKEN PROMISES on one side of the foundation. The other reads the Spanish translation, FALSAS PROMESAS. The abandoned five stories are either rising out of the rubble or sinking into it depending on how you look. This is a striking image to see now, in the age of COVID-19, the Trump administration, and Washington delegating New York to be an “anarchist zone.” 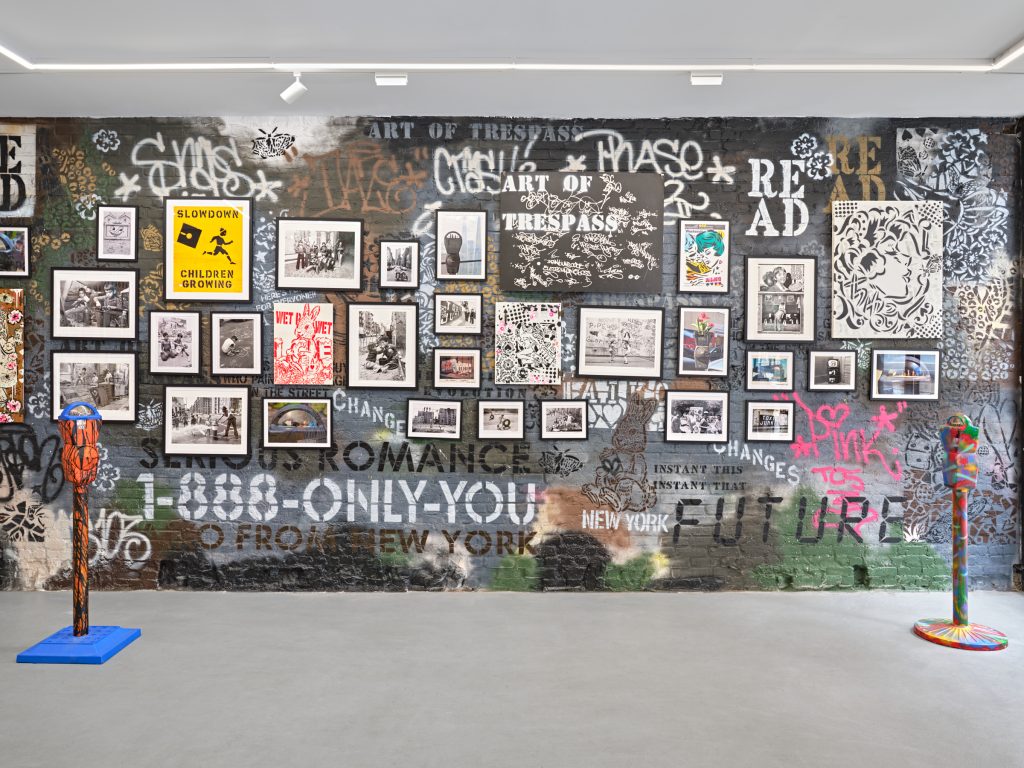 The current state of the city has more than a few parallels to the cultural moment it was in during the 1970s and 80s. Mass governmental neglect and corrupt local politics. Rising crime rates. The best parties happening out on the block with boomboxes that make the buildings shake and a BYOB policy that leaves New Yorkers drinking bottles of Presidenté and Heineken out of brown paper bags. And famed stencil artist Lady Aiko, curator of the recent #NYIsOK: Our New York Times show at the Lower East Side gallery Trotter&Sholer, has lived through it all. 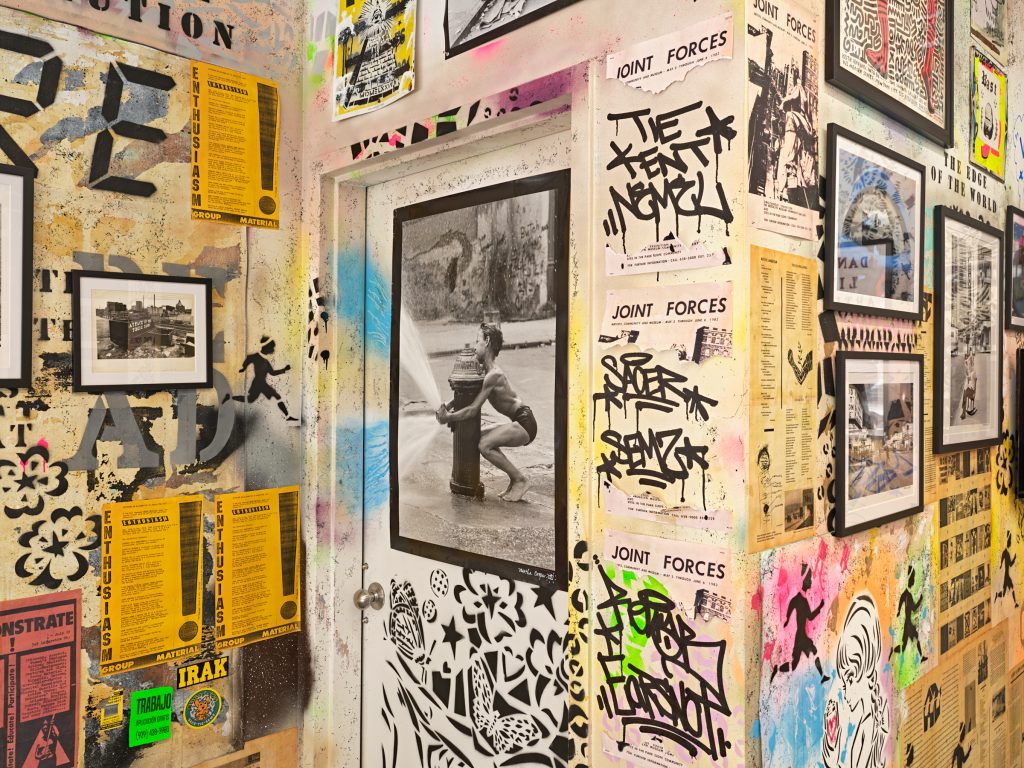 The Lower East Side is Lady Aiko’s domain. Her own history as one of the dominant graffiti voices on the local walls informs the gallery’s presentation, starting with the bold choice to take the art out of the frames and onto the walls of the space. Tags by Ecuador-based trailblazing graffiti writer Lady Pink, stencils by Lady Aiko, and other New York street art veterans adore the walls. Text on one side of the space reads HE WAS SIMPLY A GUY WHO PAINTED MESSAGES IN THE STREET in John Fekner’s stark, industrial black lettering. Fekner’s written art shows up in both small and large ways, Lady Aiko’s curational instincts evoke a subway car-chique color palette, creating a space with walls like the pelt of some ever-changing urban animal, or the kaleidoscope of light that appears in an open hydrant on Avenue D. 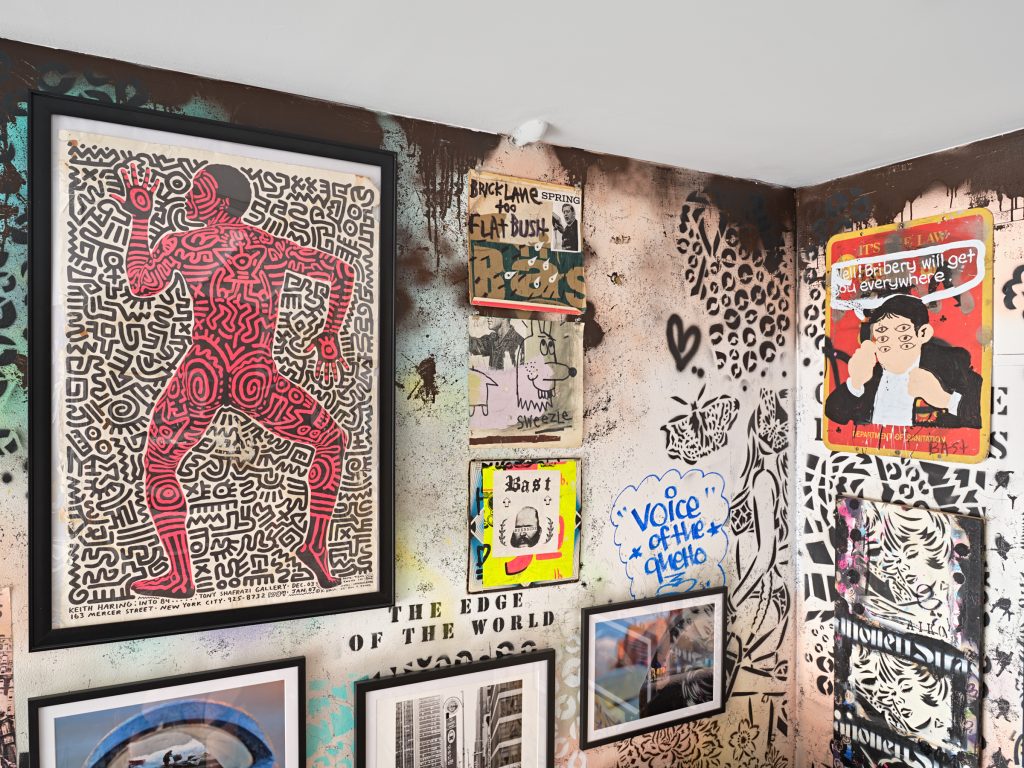 There is an inherent contradiction in the idea of a street art gallery, given that street art is a public art form and galleries tend to have admission prices and haughty cultural signifiers attached to them. But Lady Aiko shows that street art not only has a place at that table but can thrive in that space. Her choice not to confine the work to its frames shows a willingness to take risks. This is no surprise from someone with her impact and the combination of fearless attitude and elegant class that come through in her art. 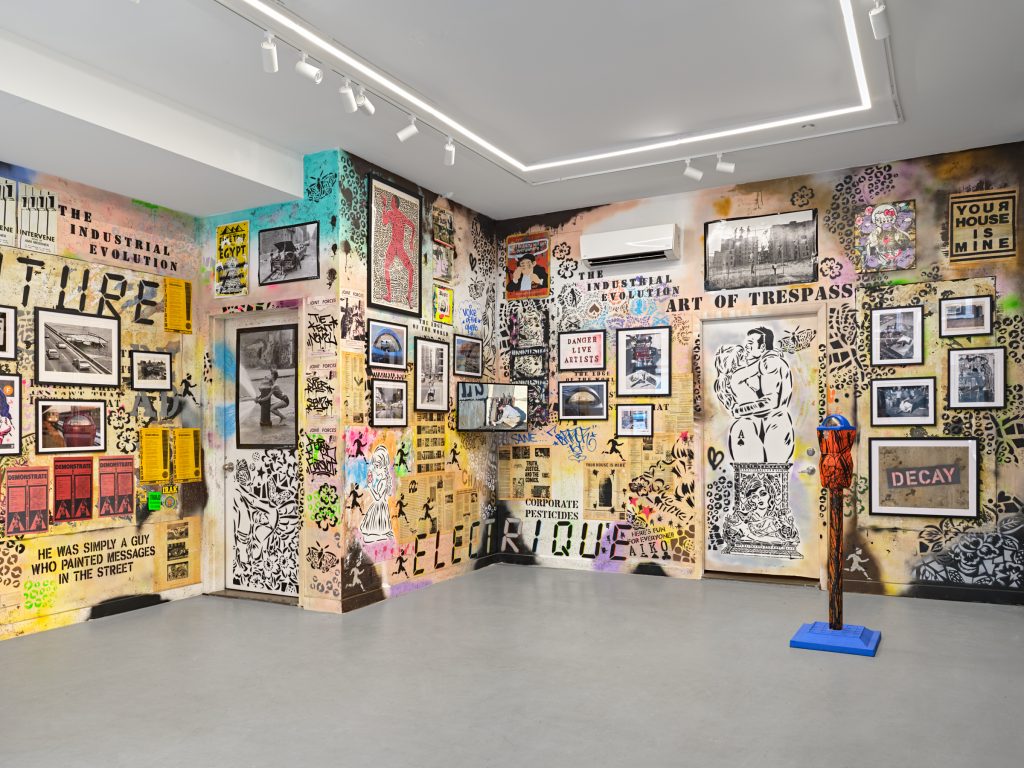 In Aiko’s Lover’s Weekend N Train, she portrays a turquoise-haired woman nuzzling the neck of a man in a yellow-patterned suit, her lashes obscuring her eyes as she caresses him with claw-like black acrylics. Her work evokes Roy Lichtenstein and Meiji era ukiyo-e woodcuts, all in the vibrancy of spray paint. Aiko’s style is an exercise in combining precision and chaos – taking the freedom of graffiti writing and balancing it with an advanced understanding of the human form. 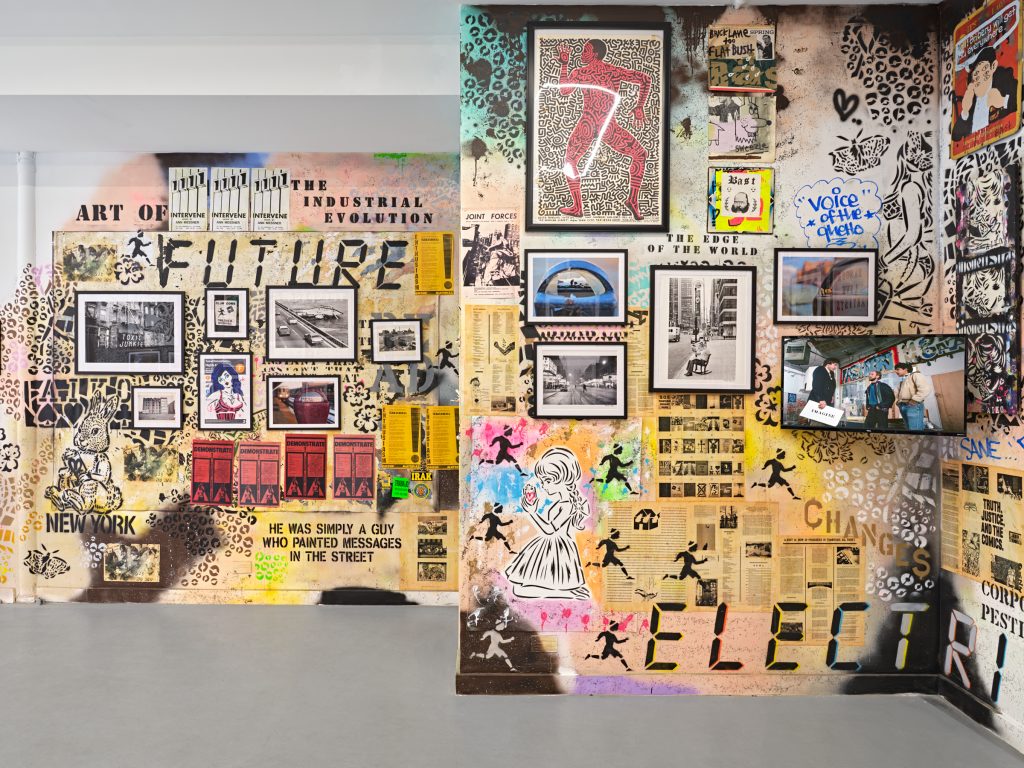 The show itself is a balance between order and chaos. Throughout the exhibit, photographs, paintings, and pieces that lay somewhere in between adorn the walls. Photography, an observational art form that mimics and re-interprets reality, makes a unique combination with graffiti, an art form meant to be publicly viewed alongside the landscape around it. Martha Cooper’s greyscale photographs bring to mind a New York that has since disappeared, but that is somehow omnipresent still. With the advent of digital and iPhone photography, it’s easier to capture aspects of everyday life and take for granted our ability to remember the things around us. Cooper’s work brings the viewer back to a time when you couldn’t just press a button to digitally preserve what you saw in front of you. The photographs are rich in memory and melancholia, but also serve as a reminder that the local government has always been neglecting the inner cities. 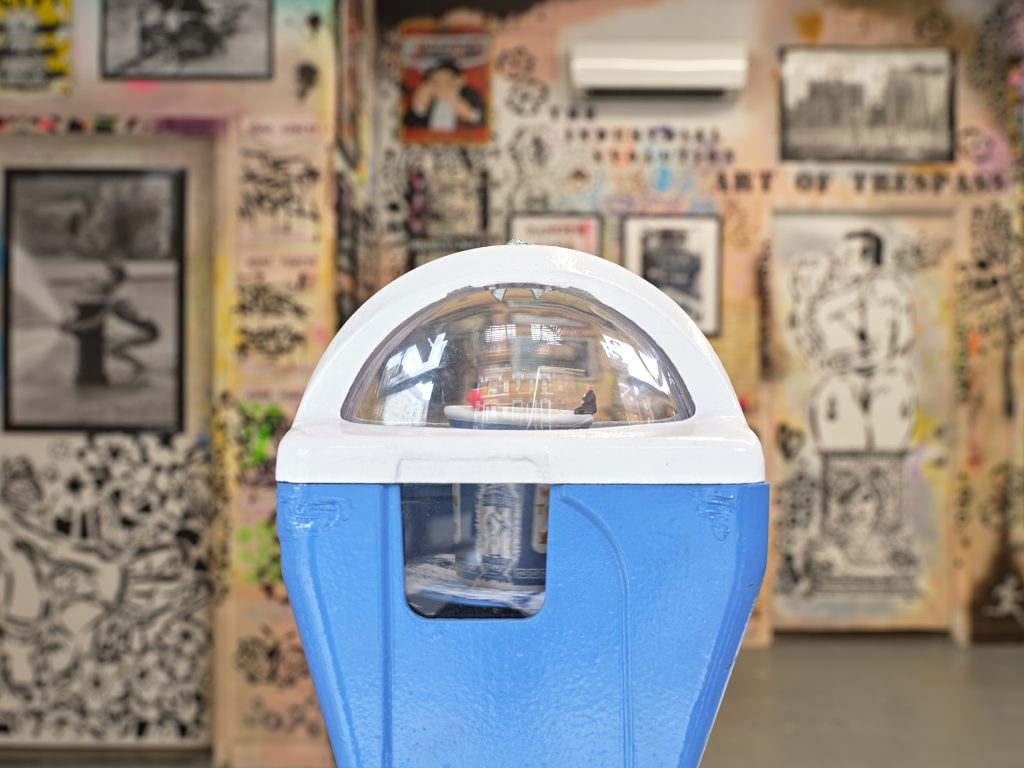 Queens-based artist Conrad Stojak takes portraying everyday city life to a new level with his parking meter installation pieces. Parking meters are both a constant in urban life and something of a class marker—no one who has valet is going to be searching their pockets for quarters for the meter. Yet they’re on every block, and there’s something humbling about how many different quarters have been in each individual meter. The meters are homes to little pieces of thousands of New York commuters. In Stojak’s 7 Train Riders the Flushing local pulls into an aboveground station just out of view, while a tiny model of the train is reflected in the glass of a purple parking meter. It’s a piece that speaks to the smallness of humanity, and how in New York it’s easy to feel lost in the crowds of commuters. The 7 in particular carries businessmen and nannies alike through the center of Queens. There’s also a sense of whimsy to Stojak’s art that cements him as a true street artist, taking his work beyond subway tunnels or walls and into the machines and structures that make up daily New York life. 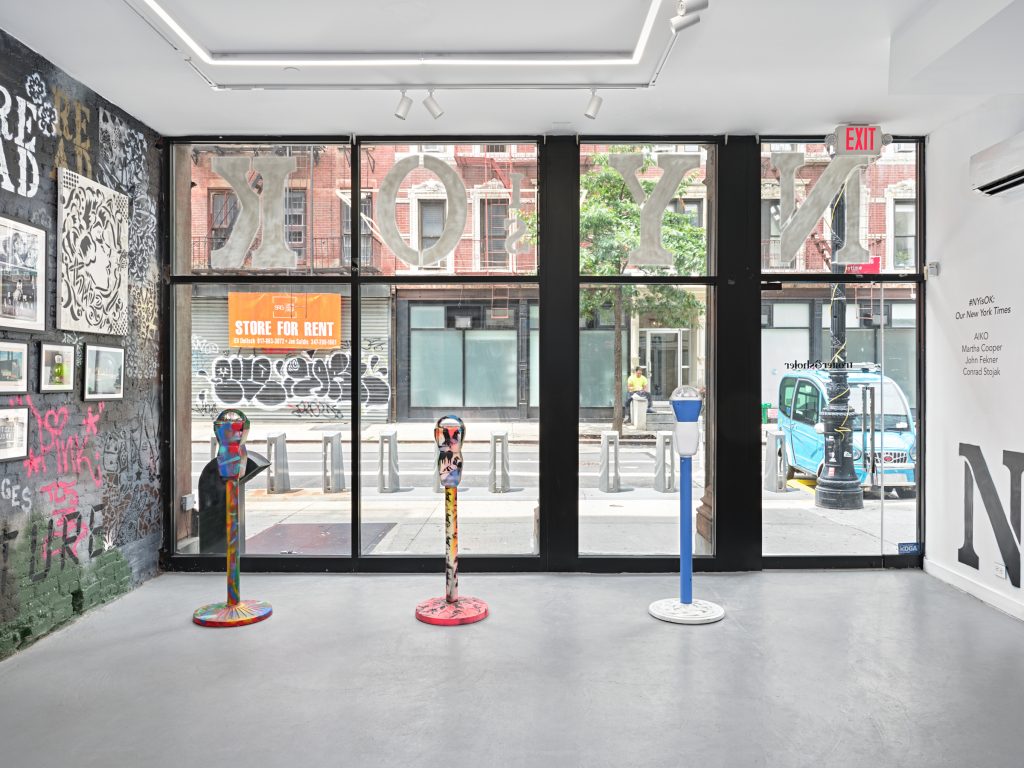 Though there is an obvious pun in the title Our New York Times, Aiko intended the show to connect the past, present, and future, so it is a show quite literally about New York and time. Much of how art is perceived and created deals with questions of space rather than time, the material rather than the temporal. But with Aiko’s curation, the gallery becomes a holy place in time, where the viewing experience is not just about how the pieces look but instead how they relate to each other to create a fully rounded experience of the past, the present, and the future. The past can be preserved in photographs or paintings, and much of art’s purpose is to sustain memory and allow us to return to places that no longer exist. But the future is not something we can see or even conceptualize and is much harder to portray in a piece of art. Yet in Lady Aiko’s exhibition, I felt I could conceptualize it. It would look a little like the past and a little like the present—both and neither, something entirely new. 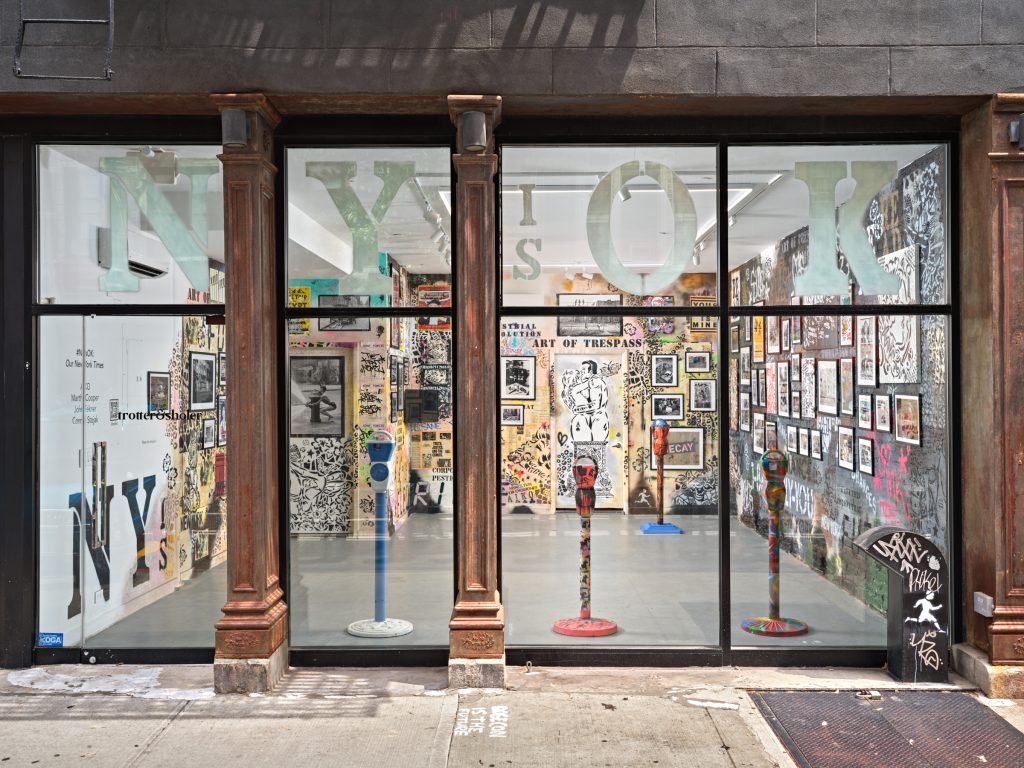