A metal grate clangs shut as you descend into the basement towards Meredith Rosen Gallery. It’s one of those 1940s-esque sliding elevator doors made up of interlocking triangles, and it sets a fitting tone for TOES, KNEES, SHUOLDERS, HEADS + BUTTS, & GUTS, the most recent exhibition in the gallery space. Show organizer Zak Kitnick intentionally chose this location for his idea for a show playing with the idea of spatial orientation for art display. “Thinking about exhibition making along the same lines as building a house, it starts with the foundation, he said. “With the gallery occupying the basement level of the building, the space most often associated with the utility core, these works play with the idea of function.” 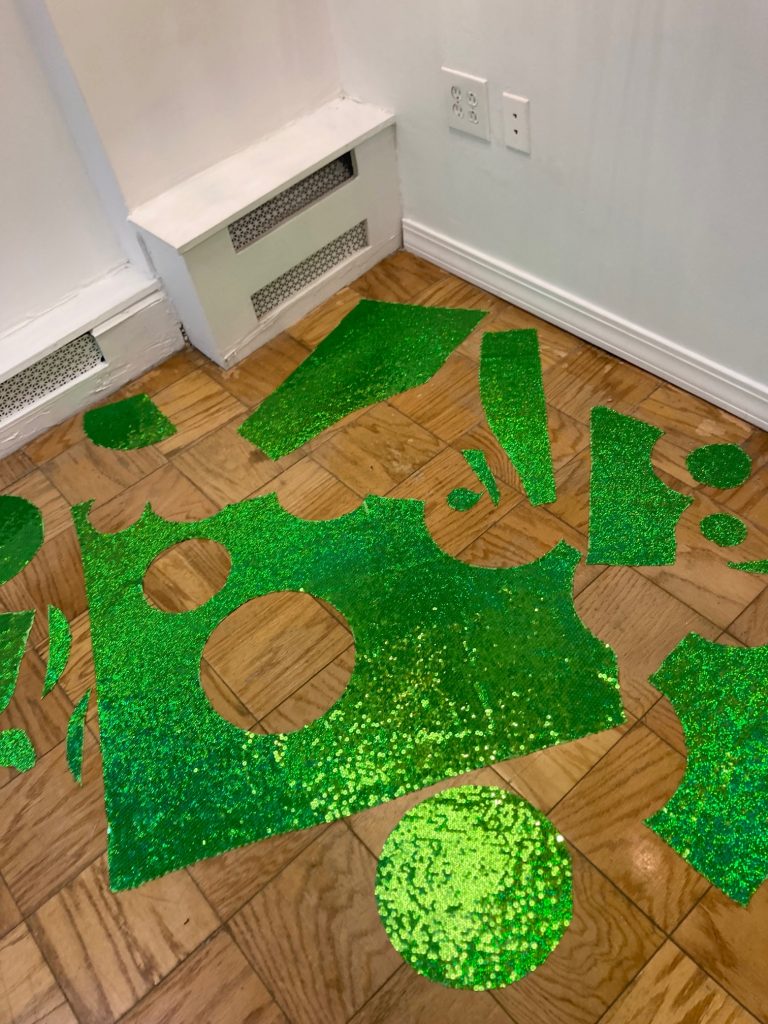 In the basement, the “guts” of the building are exposed, as you make your way to the gallery you pass several doors which lead to laundry rooms and electrical closets. (On my way out I opened almost all of these doors in search of the stairwell). “The basement conjures ideas of the bunker, an architecture built to protect,” Kitnick said. The gallery is a spot of bright light at the end of a darkened hallway, and for this particular exhibition it felt prescient to take in all of the surrounding environment from the welcome mats in front of basement apartments to the gentle creak of the elevator at the end of the hallway. 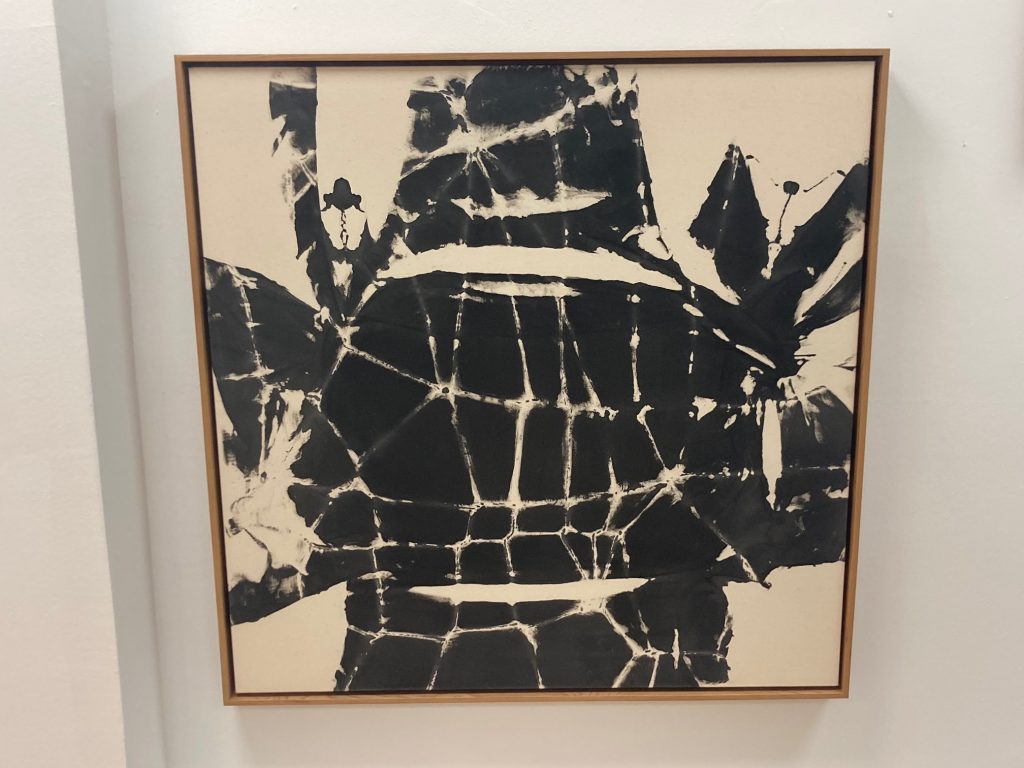 TOES, KNEES, SHOULDERS, HEADS + BUTTS, & GUTS works with two metaphors: that of the body and that of the built structure. “There is no direct correlation between the work and parts of the body, but some works are hung at toe-height, some at knee height, some at ‘gut’ height, some at chest height, and others at head height,” Kitnick said. It’s a show that reveals how so much of human perception is limited by our corporeality. All an art piece has to do to draw our attention is be at head-height. 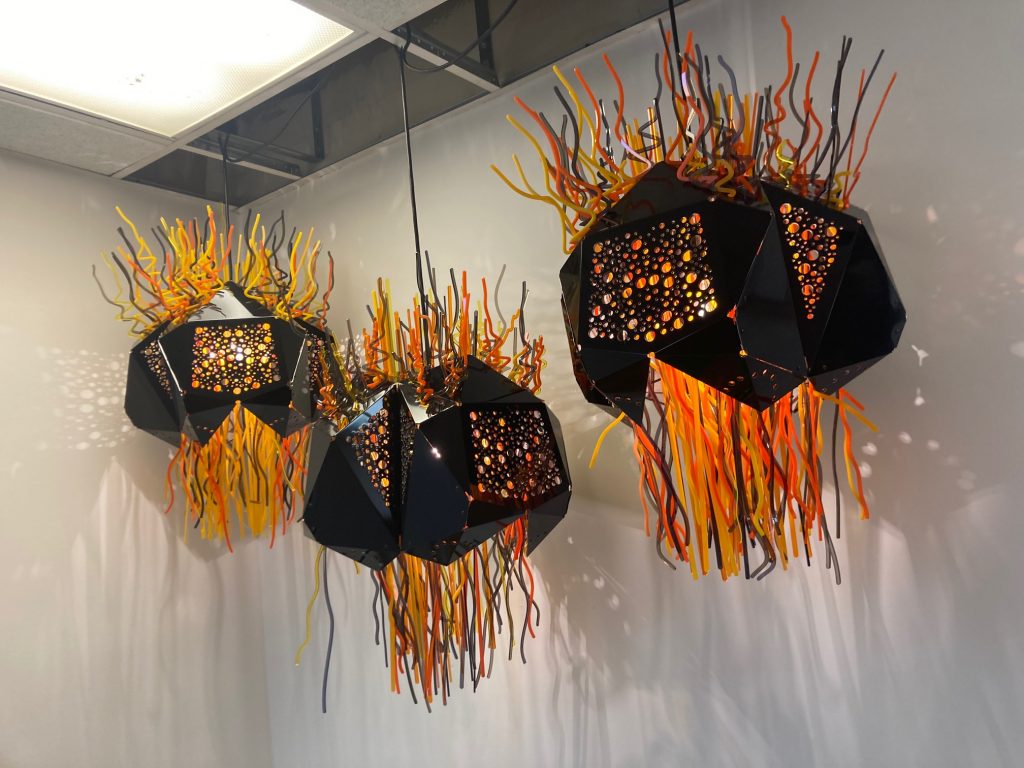 By placing many pieces at the viewer’s feet, Kitnick’s exhibition shakes up the perceptive feeling of the space. Polly Apfelbaum’s scattering of circular floorpieces, Greens scraps, grace a corner of the gallery when you come in. Rosen told me that unlike some other pieces in the show, Apfelbaum’s was sequenced in an intentional pattern. One larger scrap has two perfect circles cut out of it, and a circular green piece sits beside it. The viewer assumes the circle goes inside of the larger piece, drawing into focus the way that the mind gravitates towards interpreting things symmetrically. 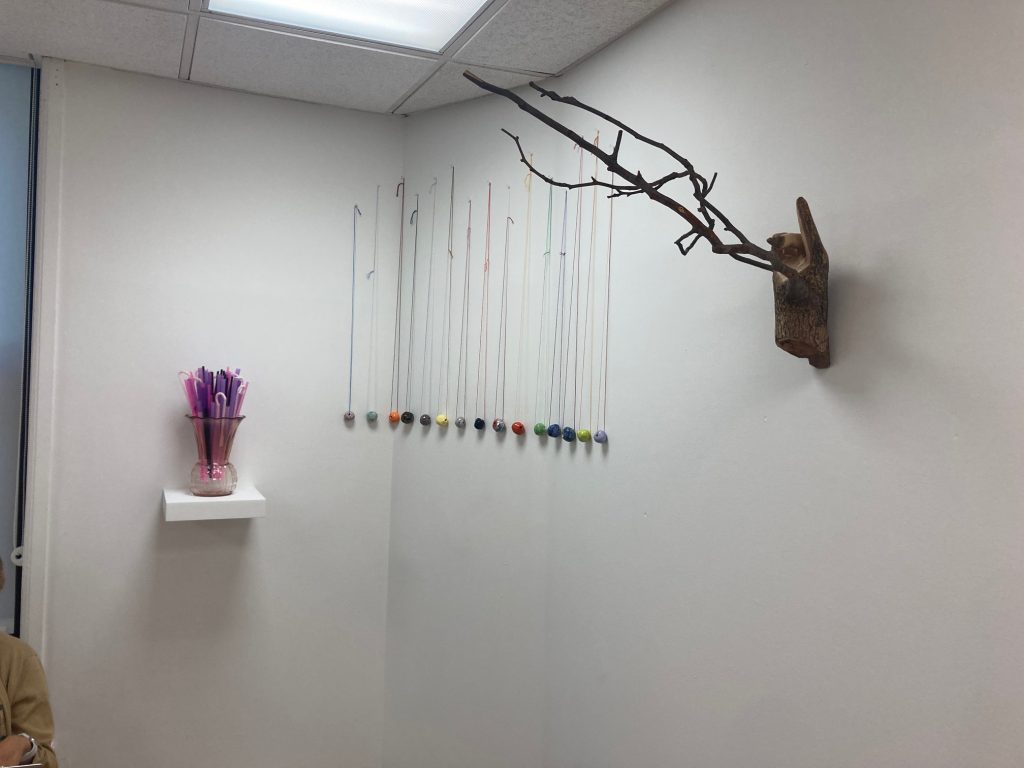 Jorge Pardo’s Untitled, a set of three hanging pieces, dangles above Green scraps. Halloween-colored tentacles emerge from black triangular masses. Some of the triangular parts of the sculptures are patterned with differently sized circles, a trypophobe’s nightmare but the makings of a beautiful display of lights on the wall behind the display. It hangs above Green scraps somewhere between shoulder and head-height, and makes a jellyfish-like shape out of industrial materials. It’s a fitting companion to Green scraps, since both use synthetic materials to evoke a naturalistic scene.

Anna-Sophie Berger’s Mud Coat occupies a similar space. Berger has slung mud along two intersecting walls of the space. It makes abrasive marks down the side of the left-facing wall, culminating in a lace coat the same color as the mud laying in the corner. The coat is draped haphazardly on the side of a radiator, and one lone strand of the coat sits atop the grate. This piece is a master class in intentionality — so much of it looks haphazard and strewn around, that it creates the impression of Berger’s extreme artistic control over the environment. 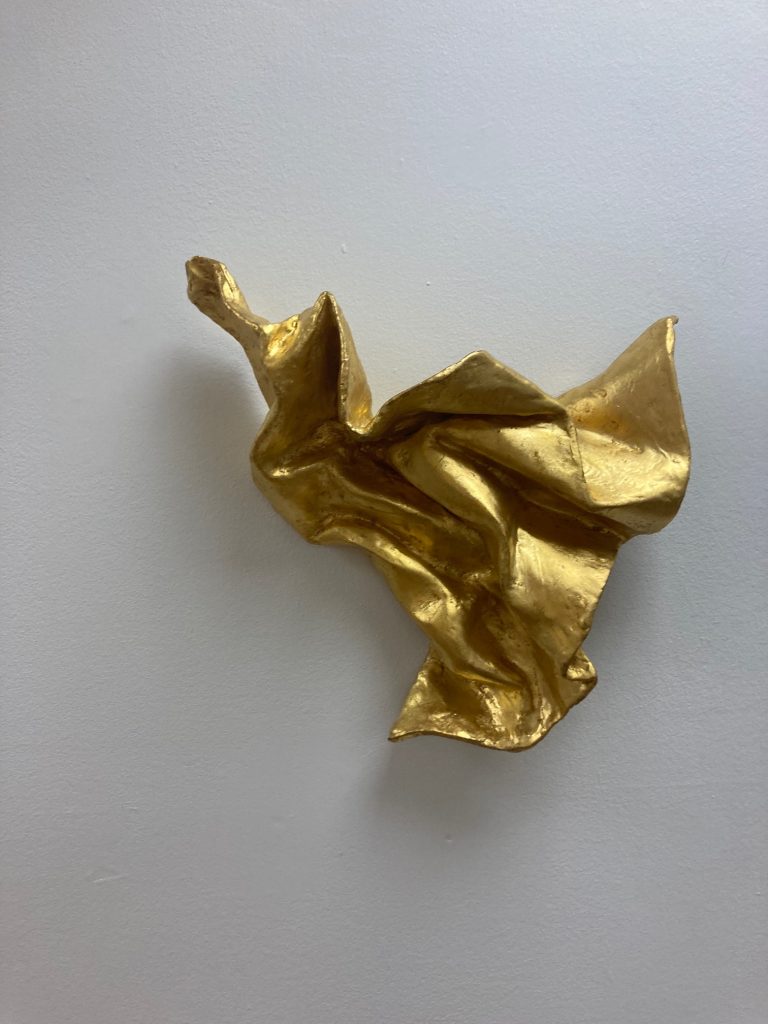 But Berger herself didn’t put the piece on the wall. Rosen and her gallery associates made mud from Central Park and threw it against the wall under Berger’s instruction, and soaked a white lace coat in the mud to achieve its brown color. Even the strand on top of the grate was how the mud fell when Rosen and Kitnick threw it against the wall. Kitnick describes Berger’s work as “nomadic,” a form of artistic expression that “moves from the wall to the body to the floor, mirroring an established model, the journey our own clothing makes each night.” Sophie-Berger and Kitnick collaborated before in a show called “Snout to Tail” in 2013, of a similar theme, and 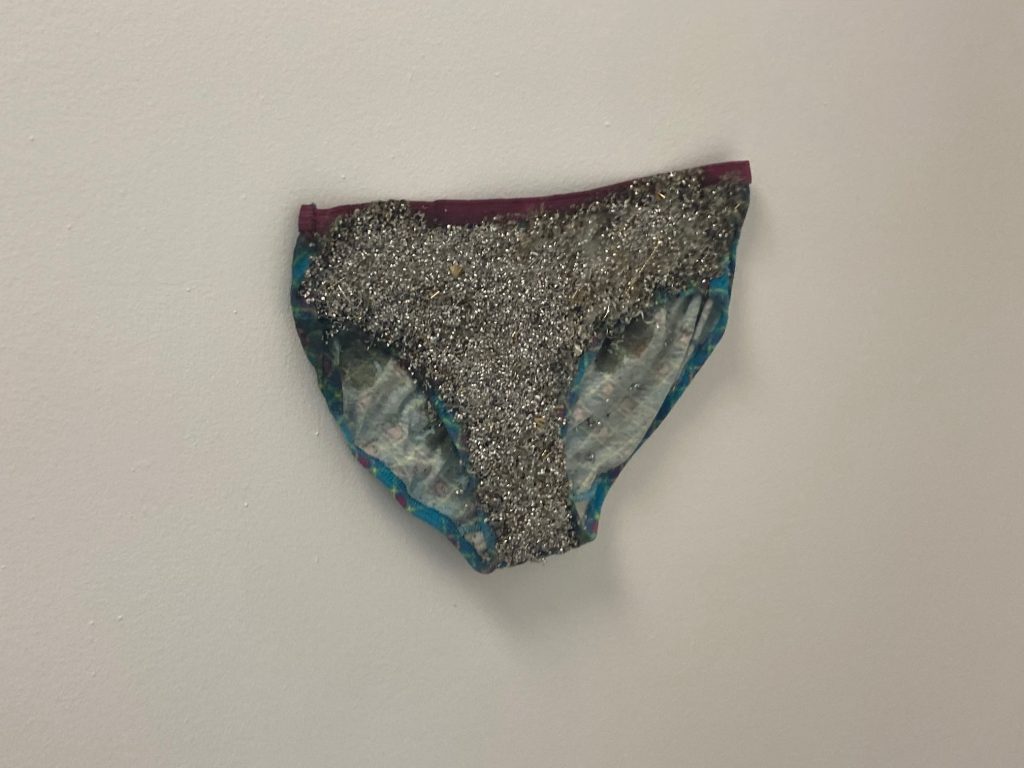 in the gallery’s second room, Harry Moritz’s sequined pair of undergarments, Undies, is hidden behind one of the gallery doors, which adds an element of taboo and exploration to the piece. If you don’t happen to open the door, the piece can only be accessed by asking about it—having to ask “Where is Harry Moritz’s Undies?” is an interesting form of forcing taboo into the open. Moritz’s other piece in the show, red light inside me, which shows fluorescent red-light candles with nude forms on it, uses the double entendre with the idea of a “red-light district” designating sexual deviancy to a specific place and then placing that red light inside to indicate that the body itself is a red-light district.

Kitnick’s own piece, Farm Animal Butts takes the lower bodies of animals and puts a pop art twist on them. The use of UV cured ink takes the image out of what human eyes can ordinarily see and into what the vision of an animal might look like. Kitnick’s work has a blunt unpretentiousness to it, rather than cloaking itself in art world stereotypes it has a genuine, upfront quality. When I asked him about a piece called Crispy Food, a plastic rendering of the box for an air fryer and inquired why it was called Crispy Food, he responded “It says crispy food on the box,” which made me realize that perhaps by trying to find some kind of modern art cliché in a piece made out of an air fryer I had missed the point of its simplicity.  . One of the show’s central themes is the reduction of body parts to their objective essences rather than what our brains come to associate with them. 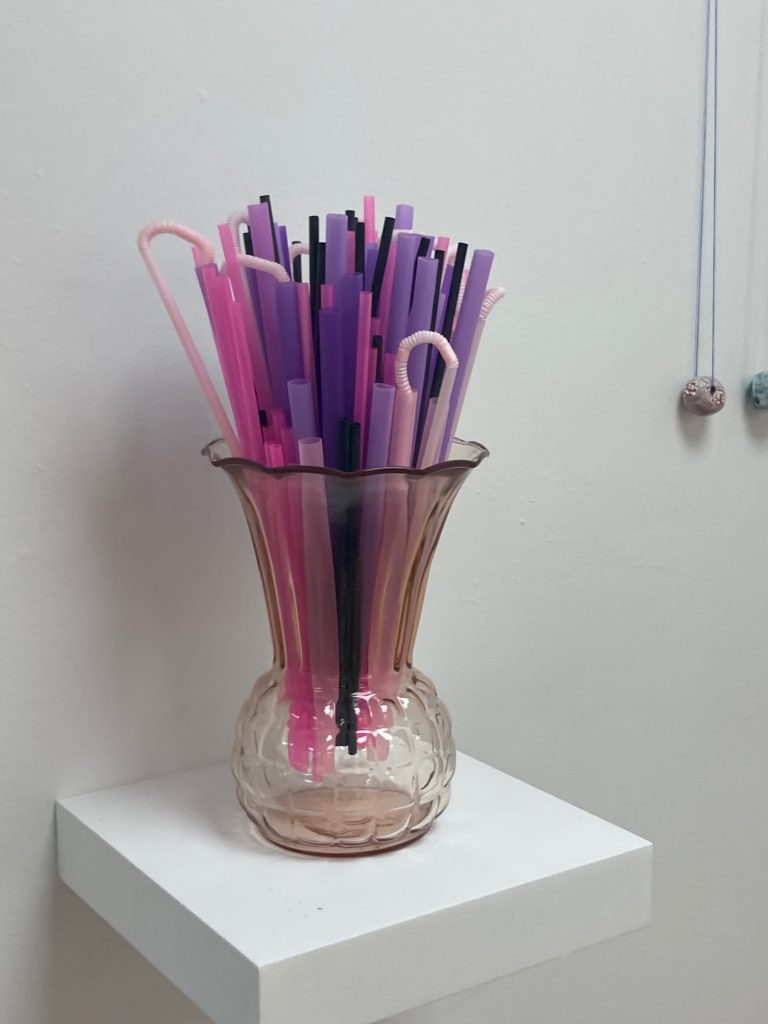