The Jewish calendar has all kinds of artistic opportunities built into its holidays. There’s the elaborate costuming and productions of Purim, the theatrics of Pesach, the all-nighter pouring over the Torah on Shavuot, and in the autumn, the festival of Sukkot, which involves building a temporary outdoor tabernacle to symbolize the fragility of life and humanity’s dependence on God.

Hasidic sculptor Zalmen Glauber began making art simply as part of his observance of Sukkot. His sukkah had intricate dioramas built into it portraying the stories of Avraham, Yitzhak, and Yaakov (Isaac, Abraham, and Jacob), the three fathers of Judaism. “I began to think I might want to do this professionally,” Glauber said. “I started going to school for it, and it developed into my gallery. There aren’t that many artists in my community, so it wasn’t hard to find out who else was interested.”

One might think the fact that there aren’t a lot of Hasidic artists might make it an isolating experience to be in artist in the community. But the magic of Glauber as a curator is that he has a way of spinning almost everything with positivity and warmth. With the insularity of his community, instead of having to forge his path alone he was able to easily seek out the other Hasidic artists because word got around fast.

“I’m particularly interested in giving exposure to artists just starting out,” Glauber said. When you come into the gallery, watercolor paintings by Hillel Weiser, who is in his 20s and the youngest in the show, sit on the walls. Glauber said: “I wanted Hillel’s art to be the first thing you saw when you came in, because he’s the youngest artist.” Weiser said of his own work that “I love to use paint because of its fluid nature, watercolor in particular, which enables me to work more spontaneously and expressively.” 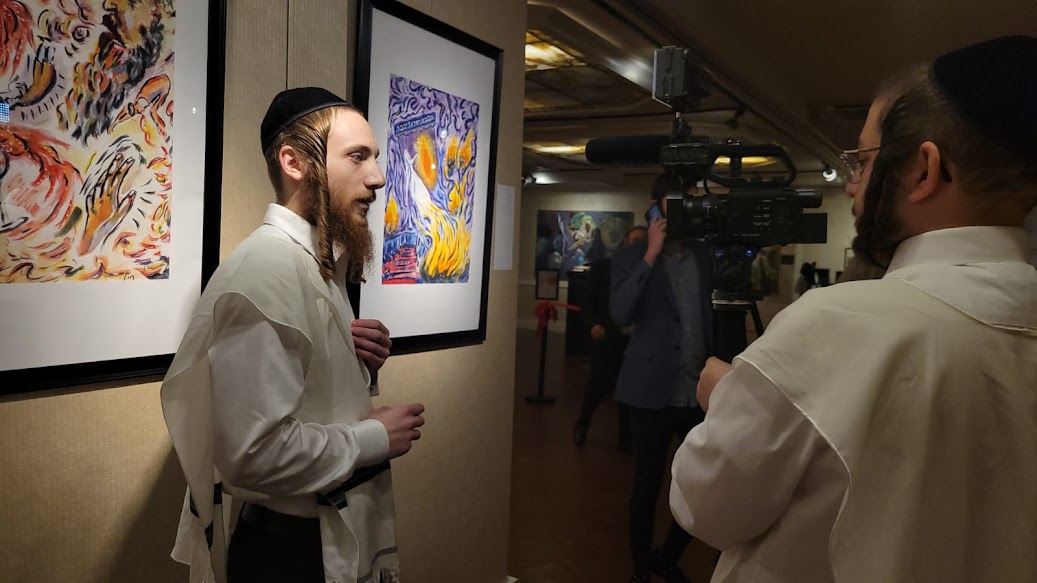 Rosa Katzenelson, another artist featured in the gallery, was inspired like Glauber by the Jewish calendar in her work. “I do certain works in the time of Elul and other subjects can only be created closer to the time of Passover,” she said. Elul is the month preceding Tishrei, which has the “high holidays” of Yom Kippur and Rosh Hashanah, the autumn festival of Sukkot, and Simchat Torah, which marks the conclusion of the yearly Torah reading. It is an incredibly significant time of year charged with a potent spiritual energy, and Elul often involves intense preparation for the holidays, so it is no wonder Katzenelson works so much during Elul.

Katzenelson’s painting Gal is one of the gallery’s highlights. The 30×40” silver and gold acrylic abstraction houses a tiny diamond in its paint, surrounded by glimmering colors. The piece was inspired by one of the psalms, Tehillim 119, verse 18, which starts with the Hebrew word “gal” and which Katzenelson translates to “Raise your eyes, and see the miracle from Your Torah.”  Katzenelson said: “For this exhibit, I focused on my art as a glimpse of an awakening of the Pintele Yid, the Jewish spark.” The titular gal can be reversed to read lag, the day in which the secrets of the Torah were revealed. 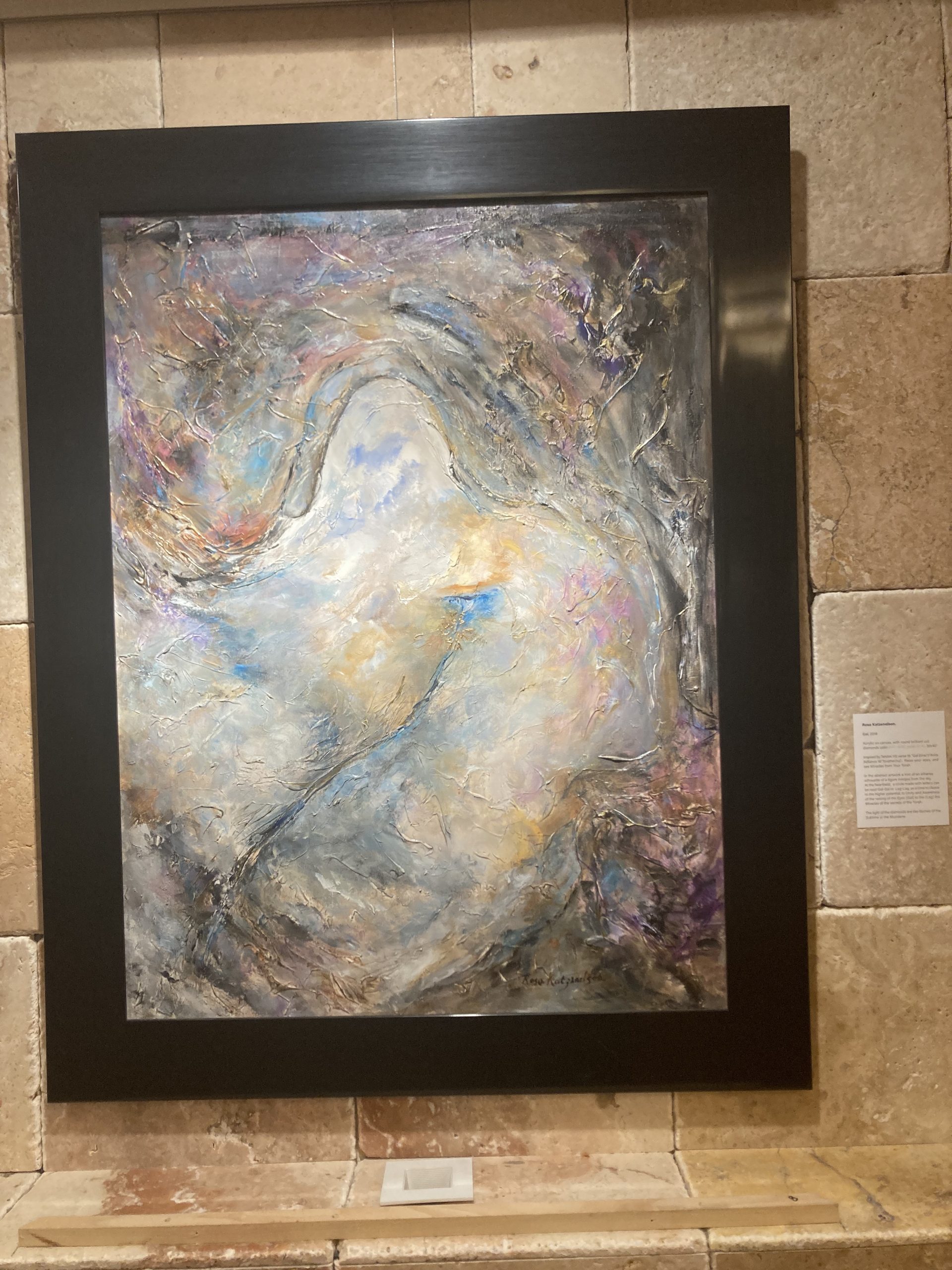 “For this exhibit, I focused on my art as a glimpse of an awakening of the Pintele Yid, the Jewish spark.”

The physical centerpiece of the gallery space is Glauber’s Difference in Harmony, an enormous installation of painted violins and a combination of yarmulkes, shtreimels, and even a New York Yankees baseball cap placed on a sprawling shelf display. “It’s about unity within the community,” Glauber said. “And celebrating diversity.” His wife, Leah, who started the gallery with him and serves as the communications director, added that it was difficult to get all of the five types of head coverings and the process involved asking around looking through old Purim costumes.

“Just last week, a guy came in and said we did not have the type of knitted kippah he was wearing,” Glauber explained. “Before I could respond, he took it off his head and placed it there on the shelf.” It’s this interactive, communal aspect to Shtetl Art Gallery that sets it apart from much of the New York art scene. This is a gallery that is built on communal interaction and a genuine desire for inter-community dialogue. Rosa Katzenelson explained “At the exhibit, each Jewish artist has a different view, media, message, energy, mission, inspiration, but the same commitment and hope.” 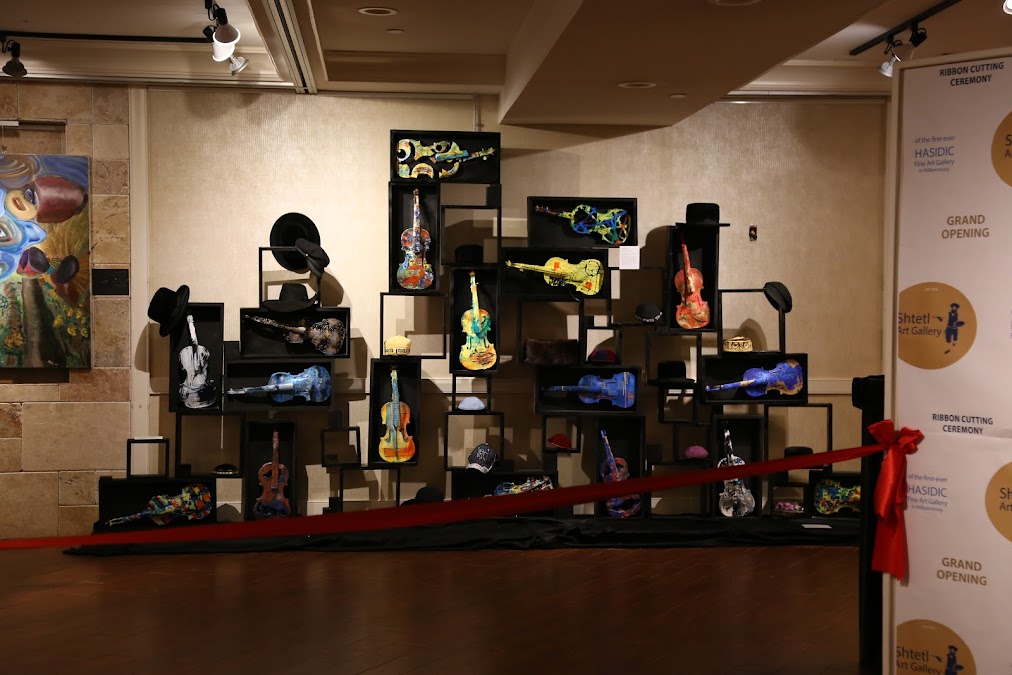 “Just last week, a guy came in and said we did not have the type of knitted kippah he was wearing,” Glauber explained. “Before I could respond, he took it off his head and placed it there on the shelf.”

Miriam Lefkowits, Glauber’s mother, has several paintings in the gallery as well. “A lot of frum women take up painting as a hobby,” Leah Glauber told me. Lefkowits studied at an all-women art school and began painting sometime after her son began to establish himself in the art scene. Her work shows an impressive range of styles, from an impressionistic scene of a family walking home from shul to an incredibly photorealistic rendering of a street in Jerusalem.

“If you ever visit that street, it looks just like that,” Leah emphasized of that painting, titled Tzfas. The golden bricks in Lefkowits’ painting seem to shine as you look at them. Lefkowits also dabbled in naturalistic realism with red flowers in a small, tranquil painting titled Summer Delight.

Lefkowits isn’t the only artist who Glauber personally knows. Lipa Schmeltzer and Glauber met in a culture class and are, in Schmeltzer’s words “art buddies.” However, Schmeltzer isn’t just an artist—he is something of a household name in the Hasidic community as a singer, composer, and visual artist. Some have described Schmeltzer as the “Hasidic Lady Gaga,” and he has performed at the White House and around the world.

Schmeltzer more than anyone understands the connection between Jewish spirituality and the arts. As well as being a singer, he branched out into becoming a painter and Shtetl Art Gallery is his first exhibition. “I do modern art, Jewish symbolism makes its way in there, even if only subconsciously. I work on stories from my childhood, which in itself is a Jewish story,” he said.

One of the things that struck me the most about Schmeltzer as an artist is that he hand-wrote all of the placards for his painting in a combination of Yiddish and English. Kiddush Lvuneh, Schmeltzer’s largest painting in the gallery, shows an abstract scene of dark blues and yellows. Its title references a ritual performed outside to bless the new moon, and though I have never taken part in one, Schmeltzer’s rendering made me want to incorporate it into my own practice. In Schmeltzer’s handwriting beside the piece he wrote: To understand the painting, you have to understand the prayer.

There was something really touching and personal about seeing that phrase hand-written. The rest of the placards were written by Glauber. All of the pieces in the show have that personal touch, but the most intimate portraits are those by Pinny Segal, who mostly paints the human form and doesn’t differentiate between specifically Jewish spirituality and the general idea of spirituality being a part of the world. “The miracle that our brain perceives through our eyes the world in pictures is pure spirituality,” Segal said.

Jay Wald, another Brooklyn-based Hasidic artist, agrees that spirituality is made up of a connection to the world around is. Wald makes abstract work using objects from nature, including one which is an eye-catching color gradient made out of emu eggshells, Perfectly Broken, and others wood from a beaver dam, tree bark hammered by a woodpecker, spines of a sea urchin, and silk cocoons of moths. “I was always obsessed with beavers. They’re the engineers of the freshwater lakes,” he explained about his piece made out of beaver dam wood he collected from the Catskills. I talked to him about how Jewish teachings often emphasize a connection to nature, from kashrut laws to the evocative ecological language of the psalms. “All of nature has so much to teach us,” he said. “If only we would put down our devices and tune in for a few. Listen to the silence, because it has so much to say.”

“The miracle that our brain perceives through our eyes the world in pictures is pure spirituality,” Segal said.

I asked the participating artists what they would want outsiders to know about Hasidic life and culture. Both Schmeltzer and Weiser responded: “Under the black and white clothing there are a lot of color.” Landau elaborated on what it meant to him: “Even though we live in a unique Hasidic lifestyle, we also live with both feet in this world and we are here to make the whole world a better place for everyone.” He continued: “Though we sometimes look very strange with old customs and Jewish religious rituals that we are doing but after all we’re are the same as everyone else, but at the same time different.”

Shtetl Art Gallery works within an age-old question of Jewish life, whether to appeal to assimilation and universality or to defiantly assert your identity. Many secular people have incorrect or bigoted views about Hasidism, leading to something of a rift between secular Jews and Hasidic Jews. But Shtetl Art Gallery is a place where any person can feel accepted and learn something. 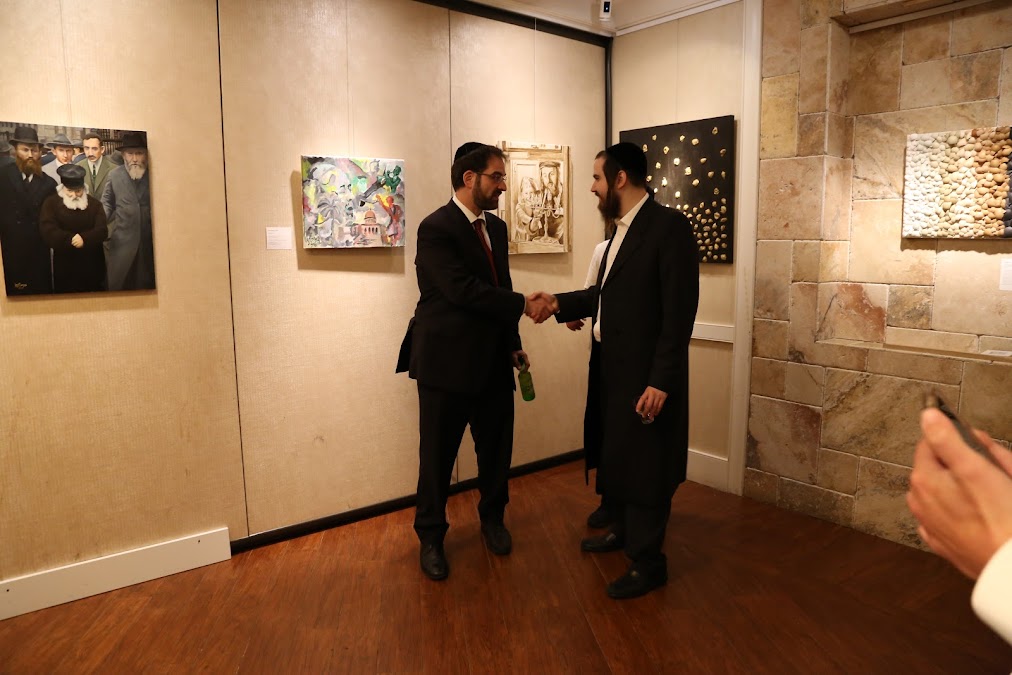 We are now in Elul in the Jewish calendar, the month Katzenelson said she is sometimes most inspired to create during. It’s a time of learning and reflection before the new year and the day of atonement, so there is no better time to visit Shtetl Art Gallery.

We are now in Elul in the Jewish calendar, the month Katzenelson said she is sometimes most inspired to create during. It’s a time of learning and reflection before the new year and the day of atonement, so there is no better time to visit Shtetl Art Gallery. The gallery is located at 56 Franklin Avenue in the basement of the Condor Hotel and is open by appointment Monday, Tuesday, and Thursday with general admission from 12-5 on Wednesdays. “If there’s a lot of interest, we may be open more,” Leah Glauber said. Keep an eye on their social media and website for more information about this groundbreaking new art space.