How Smetsky’s Vividly Colored Art Fights the Darkness of Reality

As I am wandering the streets in the search for Gallery 23, a bright yellow poster on a wall catches my eye. Shiny sparks in its eyes, a star on the poster is laughing at me with its mouth wide open. One of the star’s sides hides a message for an on-looker: “Eat Life.” The purple lining is filled with cartoonish skulls. “Star Child” posters are one of the works by Alex Smetsky, an NYC-based street artist. 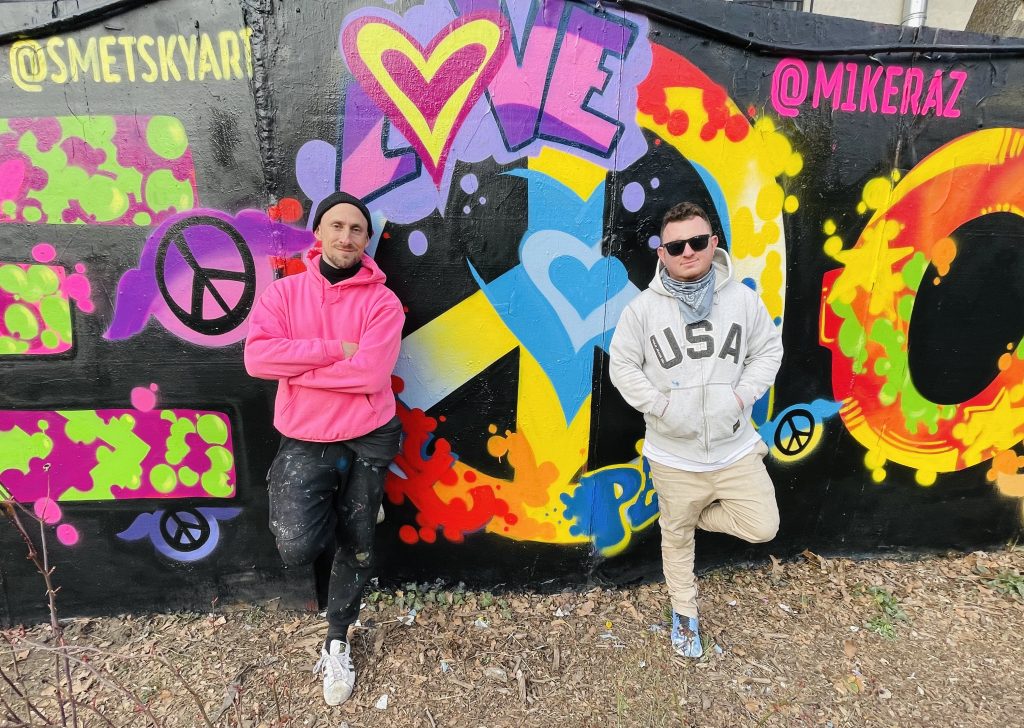 I find Smetsky in a gallery in the Meatpacking District where the artist spends his weekends. He opened Gallery 23 to give a platform for rising artists who have struggled to enter the art community just like himself. What leads me to the place is another work by the artist: the spray-painted Casper with a familiar New York landscape shining through its body in the gallery’s glass window. The radiant color — this time it is red — makes it truly Smetsky’s art.

The radiant color — this time it is red — makes it truly Smetsky’s art.

Carried away by the creative process, the artist is setting up a new art exhibition with his crew, but once he notices my presence, Smetsky greets me with a warm smile. His vibrant blue-pinked tie-dyed hoodie contrasts with his brutal Slavic appearance. “It is a good thing that I put this one on today,” he smiles as I point my camera at him. “Eat Life” is tattooed on his hand. Smetsky lands on the sofa; hanging above him is a painting of a dollar sign filled with palm trees at a sunset. The artist explains that last year’s collection was called “Cash Rules,” an entire set of canvas dedicated to money and its symbolism.

As the pandemic restrictions eased up in 2021, people were bouncing back from the financial travesty that resulted from COVID-19. The artist aimed to bring some light to the public and spread the mindset of over-abundance and happiness by rethinking Andy-Warhol dollar signs in the context of the modern pandemic reality. It was not the first pandemic-inspired currency canvas he created. Before dollar signs, he captured what indeed became the most expensive currency of 2020. He painted a roll of toilet paper… in gold. “Nobody cared for money,” he laughs. “It was no toilet paper.” Capturing the universal experience of empty grocery shelves in a witty way, Smetsky called this piece “2020.”

Before dollar signs, he captured what indeed became the most expensive currency of 2020.

Some of the artist’s signature pieces on NYC streets are posters of the yellow Star Child and bright paint drips that cover everything from his small signature heart stickers with skulls to the entirety of buildings walls. Smetsky is all about brightly-colored unique shapes. His goal is to shine positivity on the dullness of negativity. “No matter how dark life is, I want to bring bright colors to it all,” Smetsky says, “because you can’t lose, you can’t let the darkness bring you down.” The artist takes upon an uneasy challenge of converting people of the concrete jungle to the bright side. 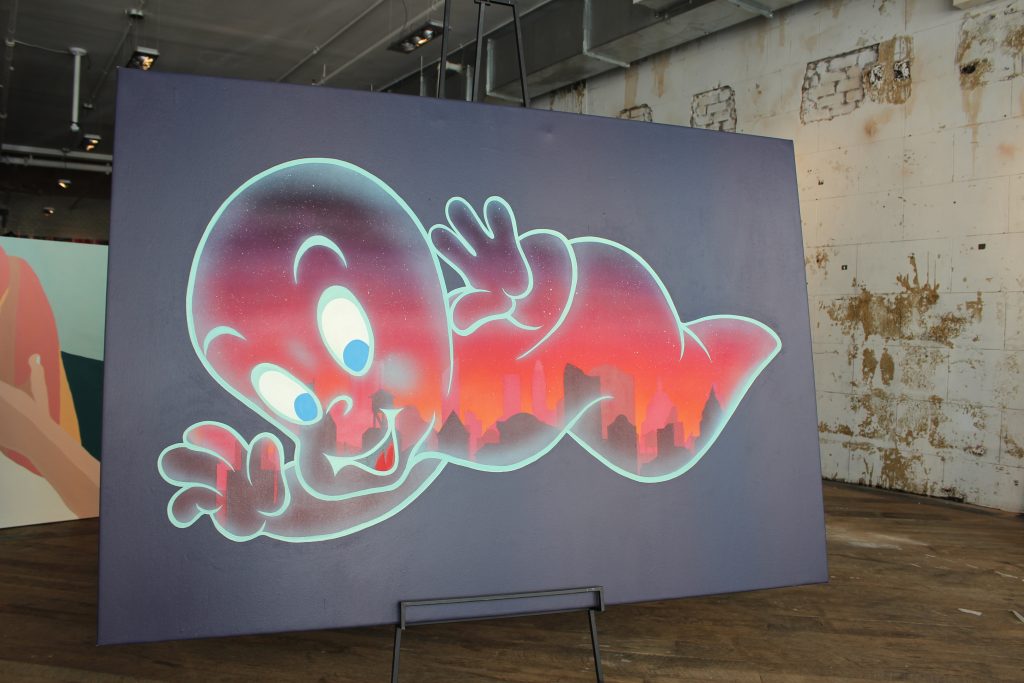 No matter how dark life is, I want to bring bright colors to it all,” Smetsky says, “because you can’t lose, you can’t let the darkness bring you down.”

Smetsky’s strive toward the light was nurtured through a thorny path of immigrant life. He was born in Moscow and witnessed the horror that resulted from the Soviet regime collapsing in the 90s. Smetsky recalls walking by the Red Square as a five-year-old kid and seeing protesters being dragged into buses, blood everywhere. Having left the country during this dark period, he can’t recall much but the fear.

Smetsky and his family emigrated to Bensonhurst, Brooklyn, NYC without sufficient funds but with a dream of a better life. The artist remembers the neighborhood being exclusively American-Italian back in the time. He represented the first gentrification wave of Russians coming there, and not everybody liked the newcomers.

“I’ve always seen how my mom and how my community would always fight through the hardships of the time,” he says. “Somehow that concept of just ‘We can’t lose’ has shown me true power.”

“I’ve always seen how my mom and how my community would always fight through the hardships of the time,” he says. “Somehow that concept of just ‘We can’t lose’ has shown me true power.” This continuous uphill battle against poverty, for a place in American society, made Smetsky realize that succumbing to dull life was not an option for him. He was destined to spread happiness and uplift people with his art in a world full of negativity and division. His passion for art was nurtured from an early age, as Smetsky was surrounded by different forms of it growing up. His mother was a well-known pianist back in Moscow. His grandfather was an artist that created numerous works for the veterans of WWII and served as Smetsky’s art role model. 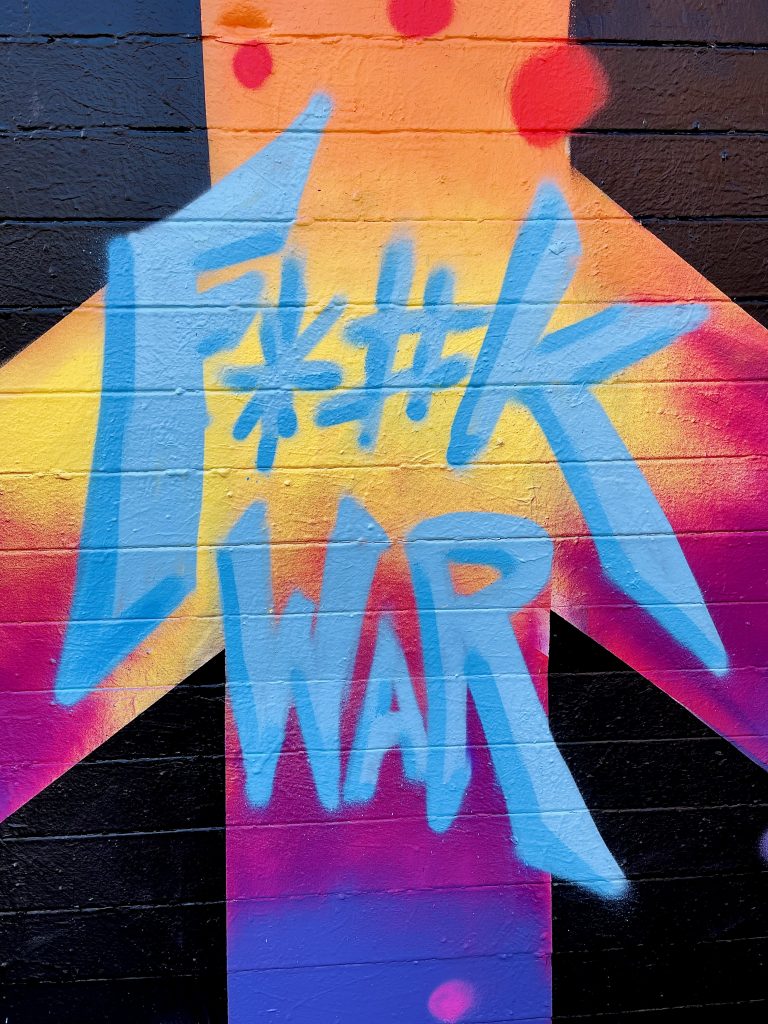 Taking a political stance was never Smetsky’s aim. This remained the case with the recent controversial mural. It featured a peace sign with wings in the colors of Russian and Ukrainian flags. Peace was the result of collaboration between Smetsky — Russian — and his art companion and high-school friend Mike Raz — Ukrainian. The two artists completed the mural on March 2, 2022, a week after Russia invaded Ukraine.

“That is why you see two wings: Russian and Ukrainian. Both of us, all we want to do is peace. All we want is peace,” explains Smetsky. The artists wanted the mural to serve as a reminder that despite the military events across the ocean, the war shouldn’t affect the relationship between Russians and Ukrainians here, in the States. The message was personal for Smetsky, as he and Raz maintained their close friendship and continued creating works together throughout the decades as well as during the escalation of conflict between Russia and Ukraine.

The artists wanted the mural to serve as a reminder that despite the military events across the ocean, the war shouldn’t affect the relationship between Russians and Ukrainians here, in the States.

For the first month, the online feedback was mainly positive. Users from different countries, including Ukraine, reached out to the artists with words of support and admiration for the mural. Everything changed overnight with a repost. “Those two flags shouldn’t be together,” recalls Smetsky the caption of that one outraged user. From there, everything started spiraling out of control. Hateful emails, name-calling, and accusations of Nazism are just some of the backlash that artists received online. 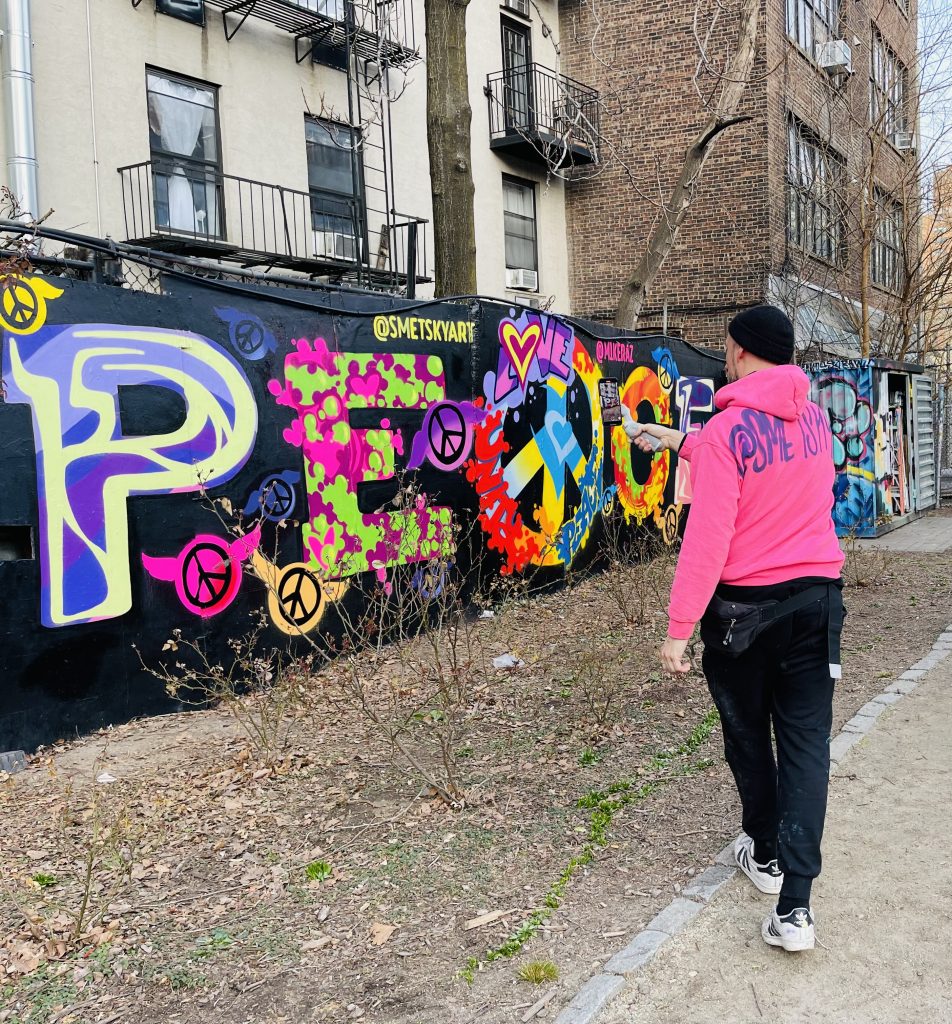 Smetsky and Raz tried to stop the wave of social media criticism by highlighting that the mural was never political and aimed to prevent the spread of hate among individual members of the two nations in the city. However, the negative feedback was becoming overwhelming for the artists to handle. One of the Instagram comments read, “Ukraine doesn’t want peace with Russia, Ukraine wants Russia to fuck off.” Many called for the removal of the Russian and Ukrainian flags on the wings comparing them to a union between Nazis and Jews.

The mural started the conversation, but not the one the artists hoped for. Smetsky and Raz didn’t aim to stir up negative emotions, but the opposite — spread love and positivity. Two months after its creation, the piece was transformed: the wings were repainted plain white.“If we make a mural about peace, and it is not bringing peace to the community… no matter how big or small the community is, we failed,” Smetsky explains his decision.

The Peace’s creator seems certain about never depicting anything connected to politics in the future, yet he doesn’t regret the piece itself. Such a mindset resonates with all the projects Smetsky takes on and his life itself: the artist is willing to explore new formats and prospects and truly treats any outcome as a valuable experience for character building. “I would never change the thing that I’ve done and never regret any single thing” is Smetsky’s response to whether or not he regrets pursuing art only part-time until recently. “Even the worst piece of shit things I’ve done in my life, I am grateful because that shame brought a better character.” 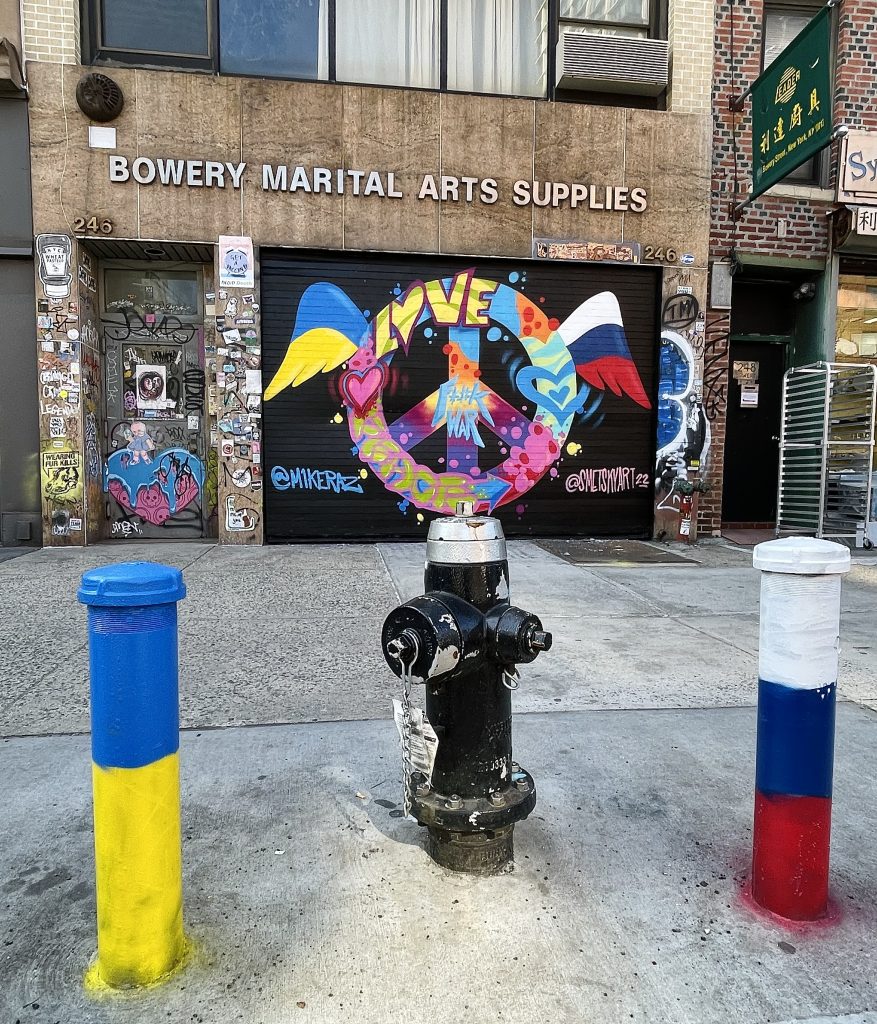 “Even the worst piece of shit things I’ve done in my life, I am grateful because that shame brought a better character.”

Don’t let his colorful art fool you, Smetsky is very cut-throat. He worked in the nightlife industry for years and mastered the art of negotiation and hustling. This is what, he believes, helped him to earn a space in the art world full-time, as clubs shut down during the pandemic. Being well-versed in the business component of the art industry, he is aggressive with his sales, pursuing potential clients and murals.

Smetsky often takes on projects that originally seem way bigger than he can handle, but the artist just figures out the process along the way. This is actually how he created the hummingbird sculpture — one of the most photographed objects in New York nightlife. One can find it in Manhattan lounge Somewhere Nowhere on the top of the renaissance Chelsea Hotel. When Smetsky pitched the idea of the sculpture to the club, even the owners questioned if the creation of such a scale was possible. Smetsky reassured them that it was, knowing perfectly well he never produced anything of this magnitude. With a tremendous amount of time, trial and error, the artist brought to life the bird that is hanging over the lounge’s dancefloor. It barely made Smetsky any money, but he recalls that experience and the challenge it posed with a special spark in his eyes.

I start to realize this is what Smetsky’s motto “Eat Life” is all about: living your life to the fullest. Tattooed on his hand and written on the stickers around Manhattan, “Eat Life” stuck with him from his nightlife era. Somebody wrote this phrase on a window in a club. First, Smetsky dedicated a mural to it in the same space. As time passed, it started to grow on him. Nobody claimed the creation, and the artist decided to keep it alive through his art.

Imagine cutting a juicy watermelon, anticipating its sweet taste, feeling the juice leaking through your fingers, finally taking the first bite, and feeling happy, alive. Smetsky believes this is how all of us should treat life, never taking it for granted.

“Swallow that motherfucker. Let it get absorbed. Let it salivate your glands. Let it get inside your tummy. Fill up your blood and all your organs. That’s how life should be!” exclaims Smetsky — the street artist whose bright, colorful, optimistic art style was born not despite but thanks to all of the life challenges. He then takes a pause. “They say we’re all alive… but how many of us are living?”

Alyona Uvarova is a freelance journalist and videographer from Russia. She has lived in China, Italy and is currently based in New York, USA. As an undergraduate, she is pursuing journalism and political science at NYU. Her passion is to share multicultural perspectives through writing and film in order to create a more unified world in which we acknowledge and accept our differences.