An American in Paris: Street Art With a SMiLE

PARIS – It was a warm night in early April, 2018, when two men sat tentatively in rickety chairs outside Le Petit Moulin, a fine local eatery that specializes in plates of hearty cured meats and cheeses on the Rue Tholozé in Paris’ Montmartre neighborhood. By the time they had dispatched a meat plate and some beer, it was 11:30 p.m., time to get to work. The two, a Frenchman who goes by the name Akiza and an American known as SMiLE, set about their mission. The streets were quiet, almost deserted.

Just down Rue Tholozé, the American produced several cans of spray paint and some used stencils. From these tools, he produced upon a Paris post box an intricate and lifelike rendering of a domestic cat in tan and black with a golden lion’s mane. Across the street, his companion followed a similar recipe to produce a work featuring complex black and white filigree with the innocent yet alluring face of a child in the center. The works, in the artists’ respective signature styles, were among several the two would complete that night. At the same time, they cemented a friendship that has endured for years, produced countless works of art over many similar nights and secured SMiLE’s place as one of the few Americans to be accepted into the rarified world of Parisian street artists. 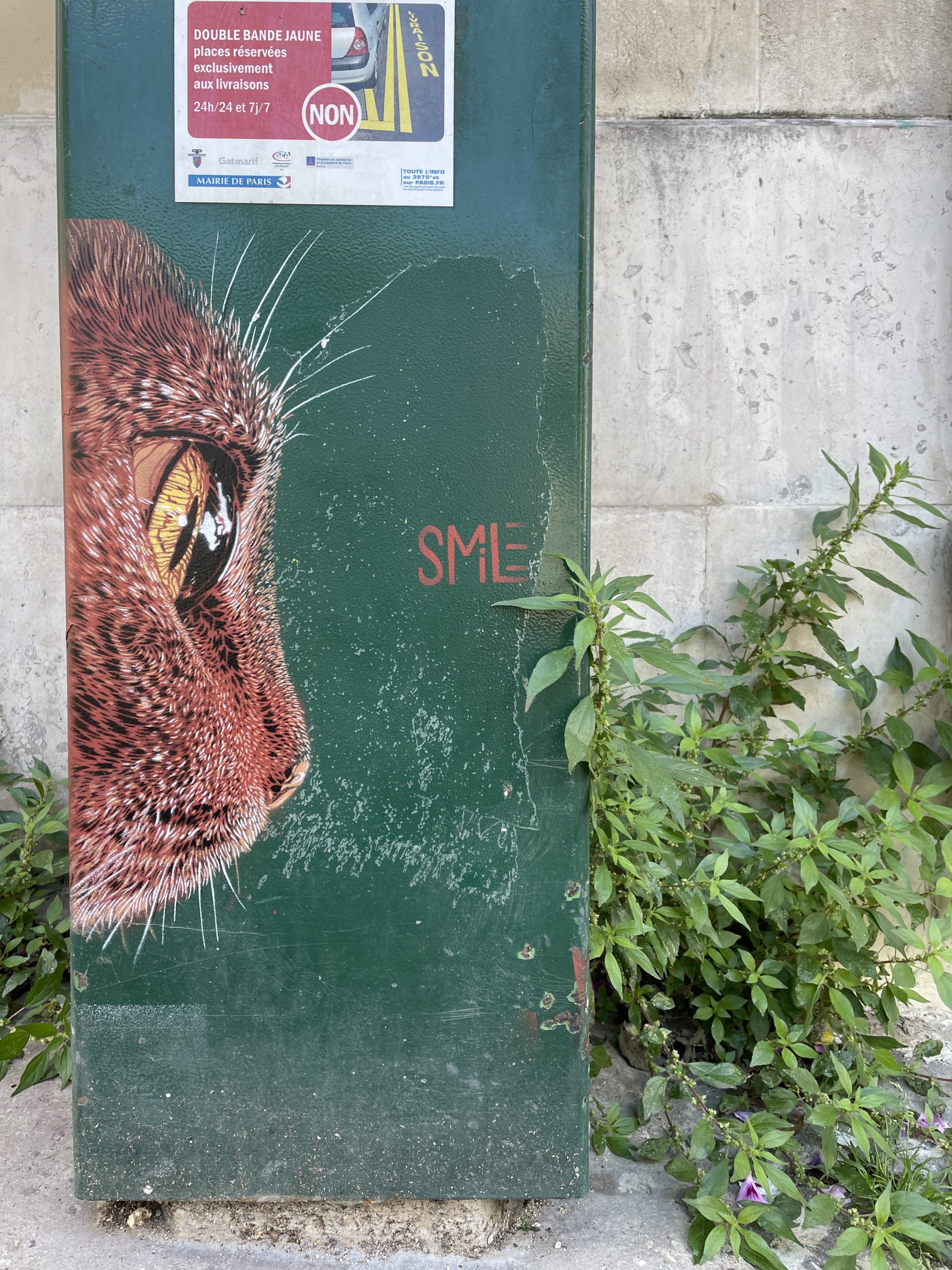 “It was just naturally what we would do, go out and paint. We really clicked.” – SMiLE

“That’s how we bonded,” SMiLE said in recalling the night he first met Akiza. I knew I liked his art before I went to Paris. That night we met, had dinner then we went out and painted. It was just naturally what we would do, go out and paint. We really clicked,” he said.

Since that night, SMiLE’s profile as an artist, on the streets and in the galleries, has grown immensely on both sides of the Atlantic. His shows at Akiza-la galerie, owned by the artistic duo which also goes by the name Akiza, have been epic successes with works selling out within hours and prompting many commissions for new pieces. His most recent domestic show, in early August at Phil Lewis Gallery in SMiLE’s hometown of Boulder, was also a red dot bonanza with 20 paintings selling out in one hour. 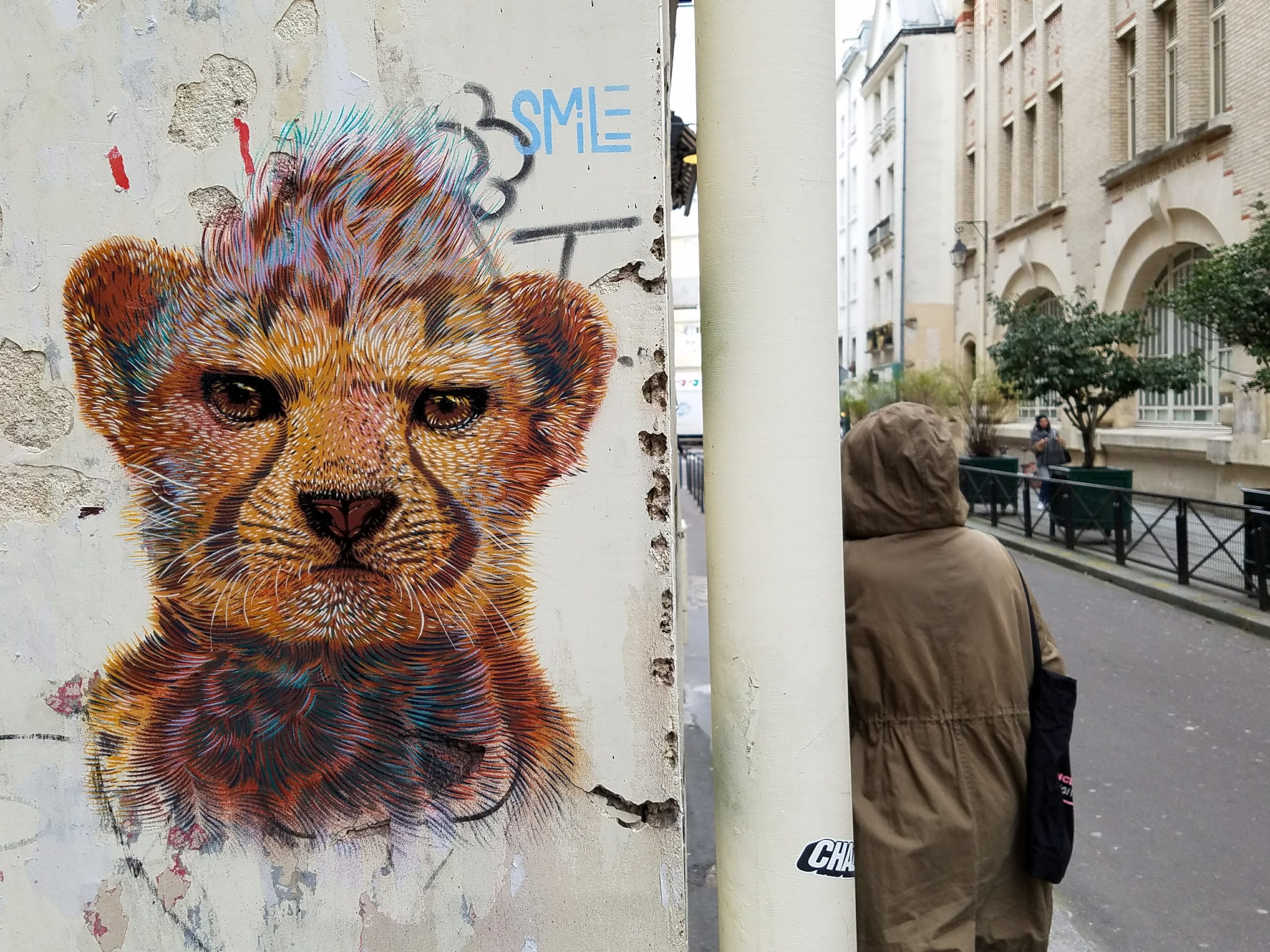 “They were curious about why this American was over here in Paris doing street art.” – SMiLE

“They were sort of pumped up about it,” SMiLE said of the Parisian street artists that welcomed him into their club with Akiza’s imprimatur after that first night in 2018. “They were curious about why this American was over here in Paris doing street art. A lot of them were into these techniques, or similar techniques, so we had that in common from the beginning,” he said.

It was in 2017 that SMiLE made his first visit to Paris. His early contacts in the local art world included Guate Mao, Silex Project and Sower. Then, a year later, he met Akiza, giving him the gravitas of a relationship with long-established street-artists and access to Akiza-la galerie. In 2018, at SMiLE’s first solo show with Akiza, his paintings sold out in 15 minutes and he received more than 1,000 messages from adoring Parisians in a single evening. A second show was delayed because SMiLE’s works sold as fast as he could complete them, 40 in one month. 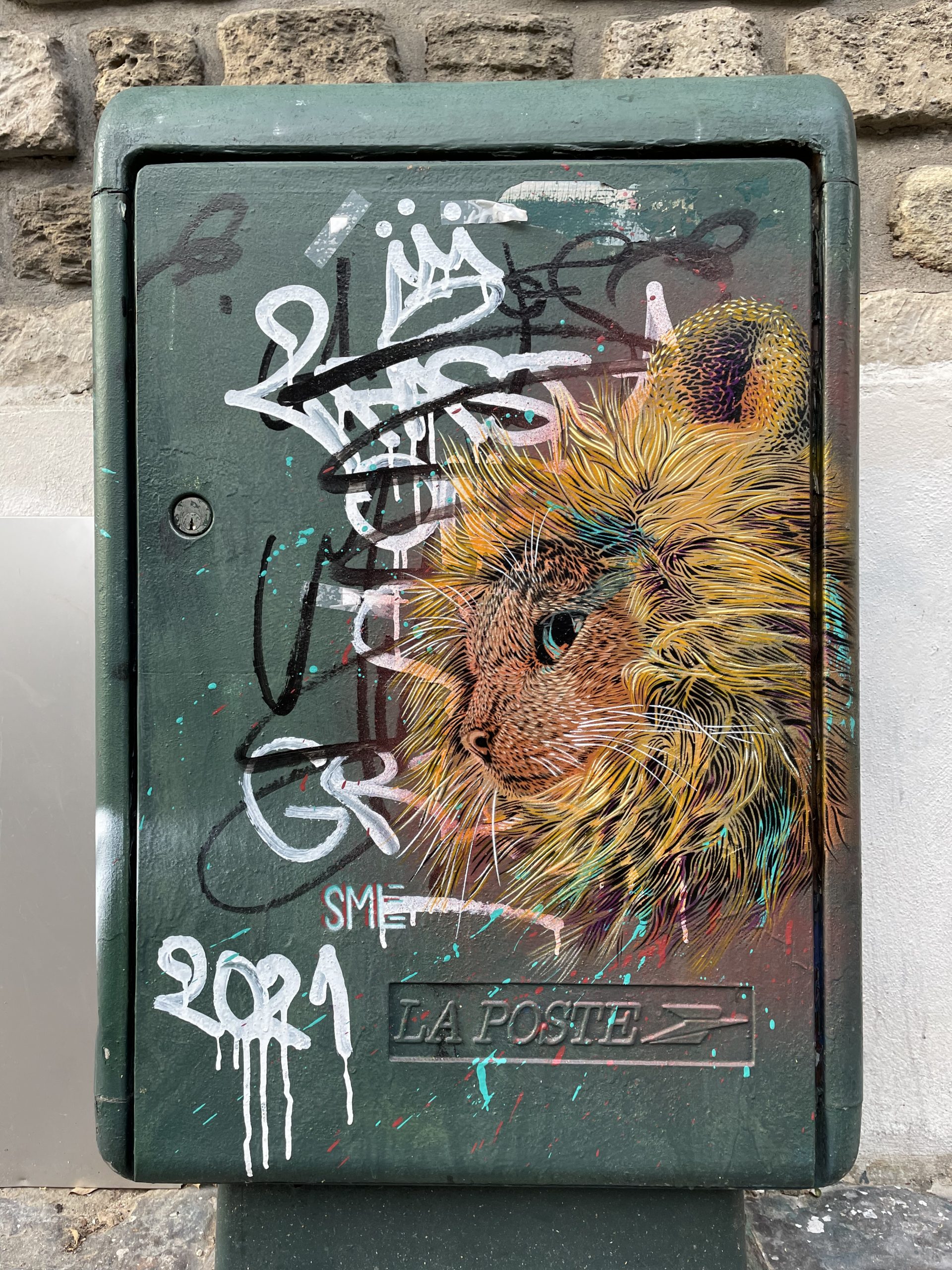 On his most recent visit to Paris this spring, SMiLE again took up residence at Akiza-la galerie painting there in the daytime and working in the Parisian streets at night. This time, his arrival was hailed by Akiza with the following post on Instagram: “THE KING IS BACK! Le pochoiriste de Boulder (Colorado, USA) est en résidence à la galerie ce mois de mai et revient peindre la nuit dans Montmartre. (The stencil artist from Boulder is in residence at the gallery this month of May and comes back to paint at night in Montmartre.). 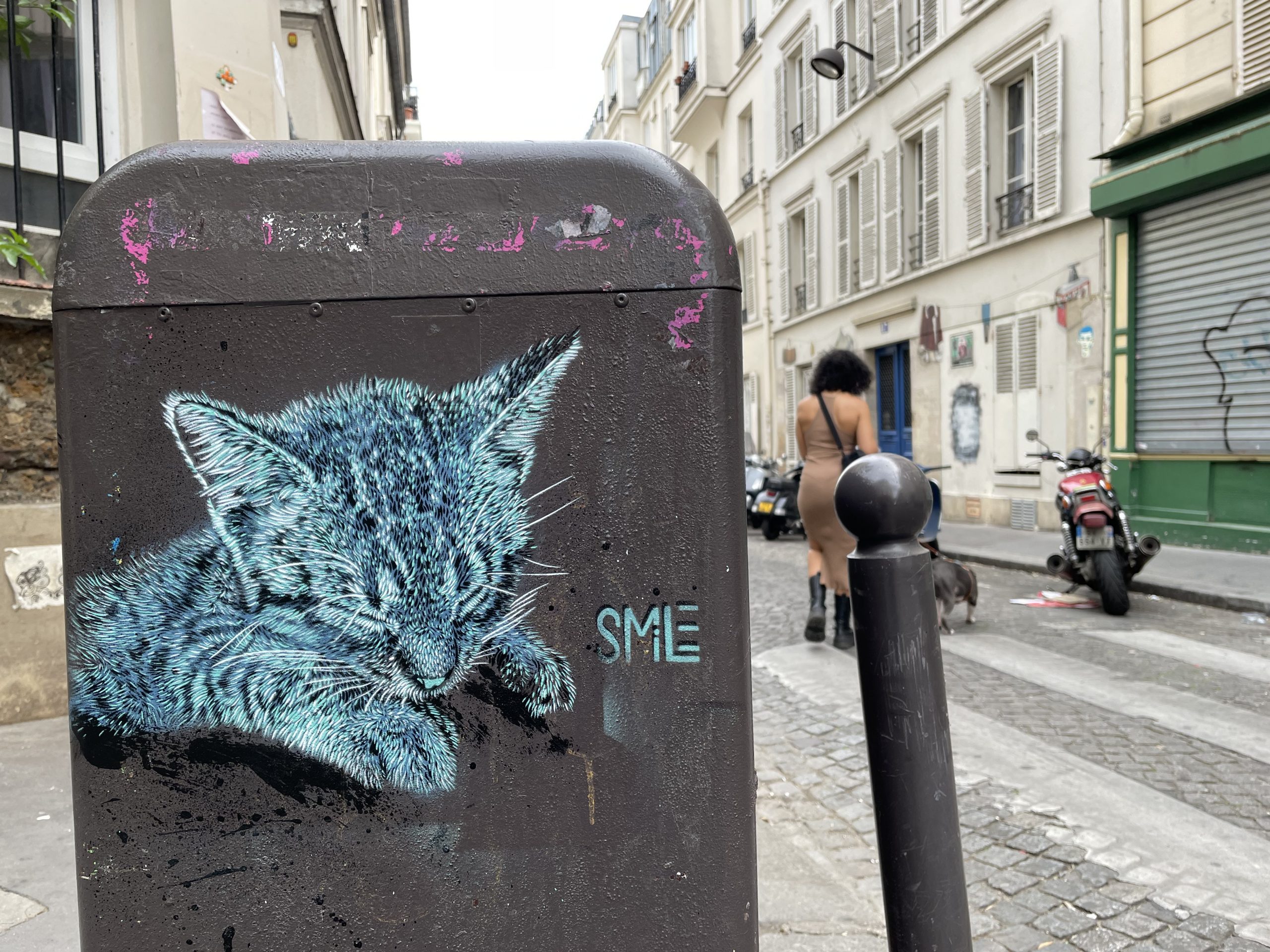 “Paris is definitely the center of what inspired me to do this type of art.”

“I had always been an artist. There was a point a long time ago that I had been traveling around Europe and I kept coming across street art everywhere I went. And that’s what drew me to it,” he said. SMiLE was first inspired by street art he encountered in Italy, but when he painted there his work was removed almost before the paint was dry. After that, Paris became his European home for good, and he calculates that he has spent at least a cumulative year there since 2017.

SMiLE’s artistic influences are many, from masters like Michaelangelo, Picasso and Van Gogh to modern stencil artists, particularly the great French stencil artists, including Ernest Pignon-Ernest, Blek le Rat and Miss Tic. While the public generally associates stencil art today with the critically embraced duo of American Shepard Fairey and Banksy, a Brit, its roots in France cannot be denied.

French artist Ernest Pignon-Ernest is widely credited with creating the first graffiti stencils in 1966 when he spray painted a silhouette of a nuclear bomb victim on a wall in the south of France. The technique was refined and popularized by the work of Parisian Blek le Rat in the early 1980s.

“Blek is sort of the archetype of the midnight artist,” SMiLE said. He sort of embodied the idea of the solo street artist working at night, anonymously putting his work out there for everyone to see. And the way he used the rat as a sort of symbol of modern life, he was pretty revolutionary,” he added.

During a recent interview at his solo show at West Chelsea Contemporary, said artists like SMiLE who develop an engaging, unique artistic style are heading in the right direction. 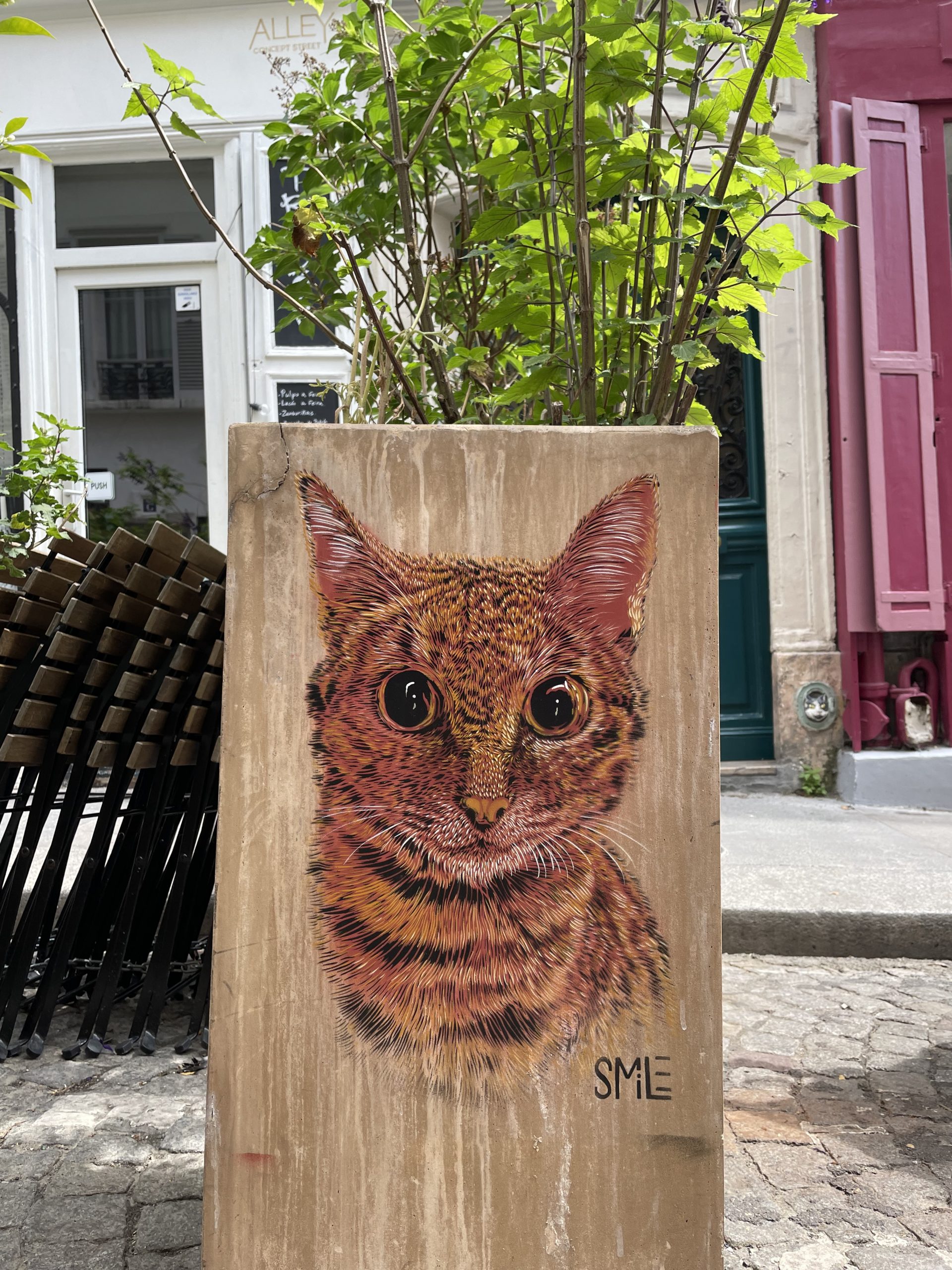 “Don’t try to imitate Banksy or Shepard Fairey, but try to find your own way of expression, which is not easy.”

“Don’t try to imitate Banksy or Shepard Fairey, but try to find your own way of expression, which is not easy. Ideas are everywhere,…but it’s not easy to find an expression, to find an Identity,” he said.

This concept of the midnight artist plying his trade as the city sleeps is one SMiLE has embraced; whether in Paris or back home in Boulder he usually works ninja-like alone and at night. “I’ve always been kind of a sneaky guy, and as a kid I loved to ninja.”

There wasn’t much of a street art scene in Boulder when SMiLE, now in his early-30s, was growing up. Still, it was in Boulder that he perfected his signature stencil vérité style during the breaks between his ever-more-frequent travels abroad.

For SMiLE, a touchstone moment, one more consumed by grief than inspiration, came when his beloved cat Tybalt was eaten by a coyote. SMiLE channeled his grief over the death of Tybalt, who was named for Tybalt Capulet Juliet’s hothead cousin in Romeo and Juliet, into art by making the late feline the model for many of his early stencils.

While known for his lifelike rendering of cats, foxes and other animals, he also depicts human subjects, including many of his artistic influences and entertainment favorites. Subjects have included Michaelangelo, Picasso, Van Gogh, Arthur Rimbaud, Jack Kerouac, Neil Cassady, Jim Morrison, Jerry Garcia, Debbie Harry and the Dalai Lama. He is particularly fond of a portrait of Van Gogh he painted near the legendary Dutch artist’s one-time Paris home. 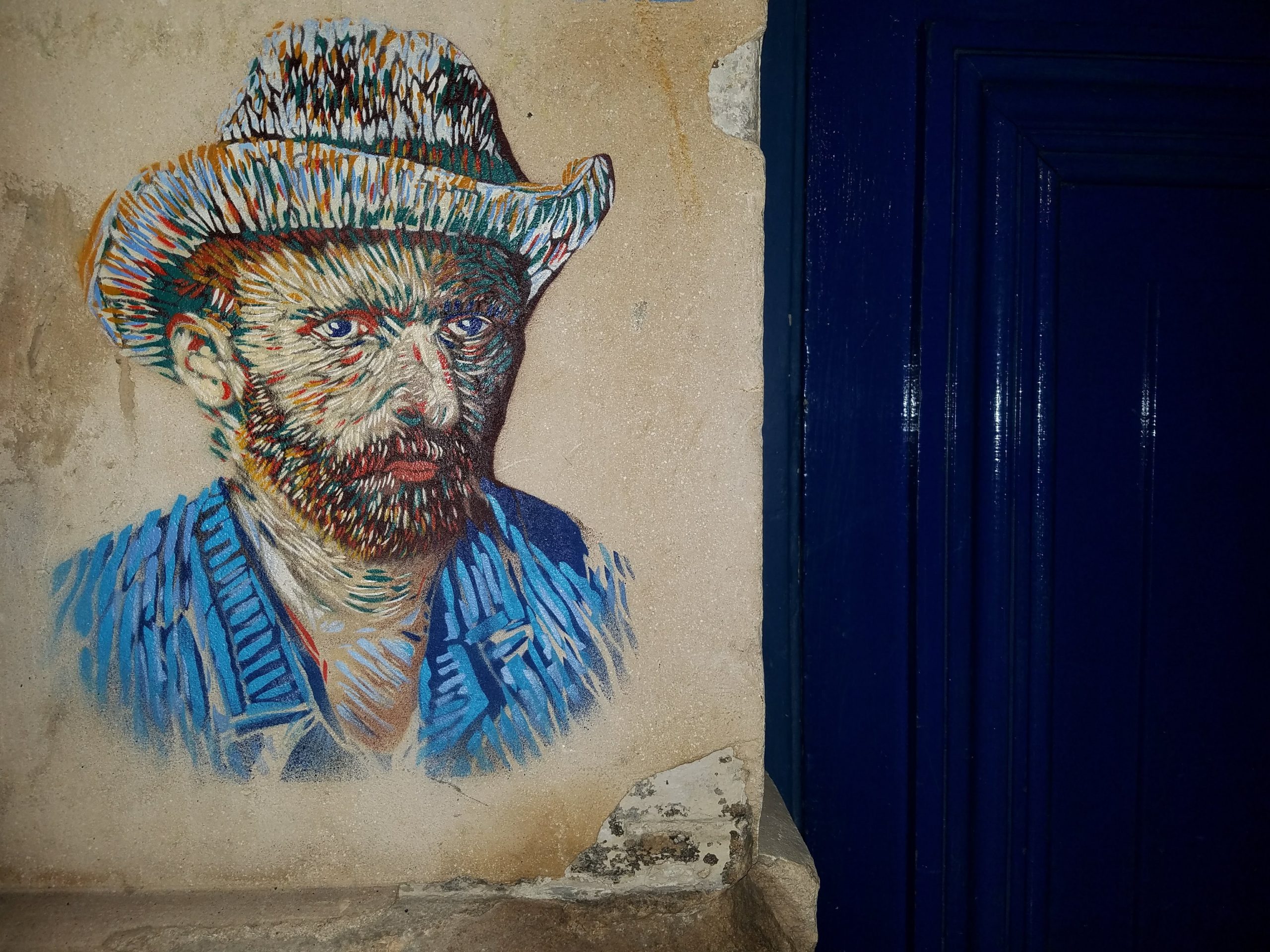 “I realized at some point, after seeing my work on the streets of Paris, that a piece of illegal art can still be beautiful and make people happy. That’s probably the most important thing about it,” SmiLe said. What SMiLE really took from his years as part of Paris’ evolving and maturing street art scene was the realization that street art is about more than the artistic ethos that drives artists into the streets and alleys in the dead of night to put their art on public display. No, he said, it’s more about what happens as dawn breaks and the works begin their day-jobs as évocateurs. 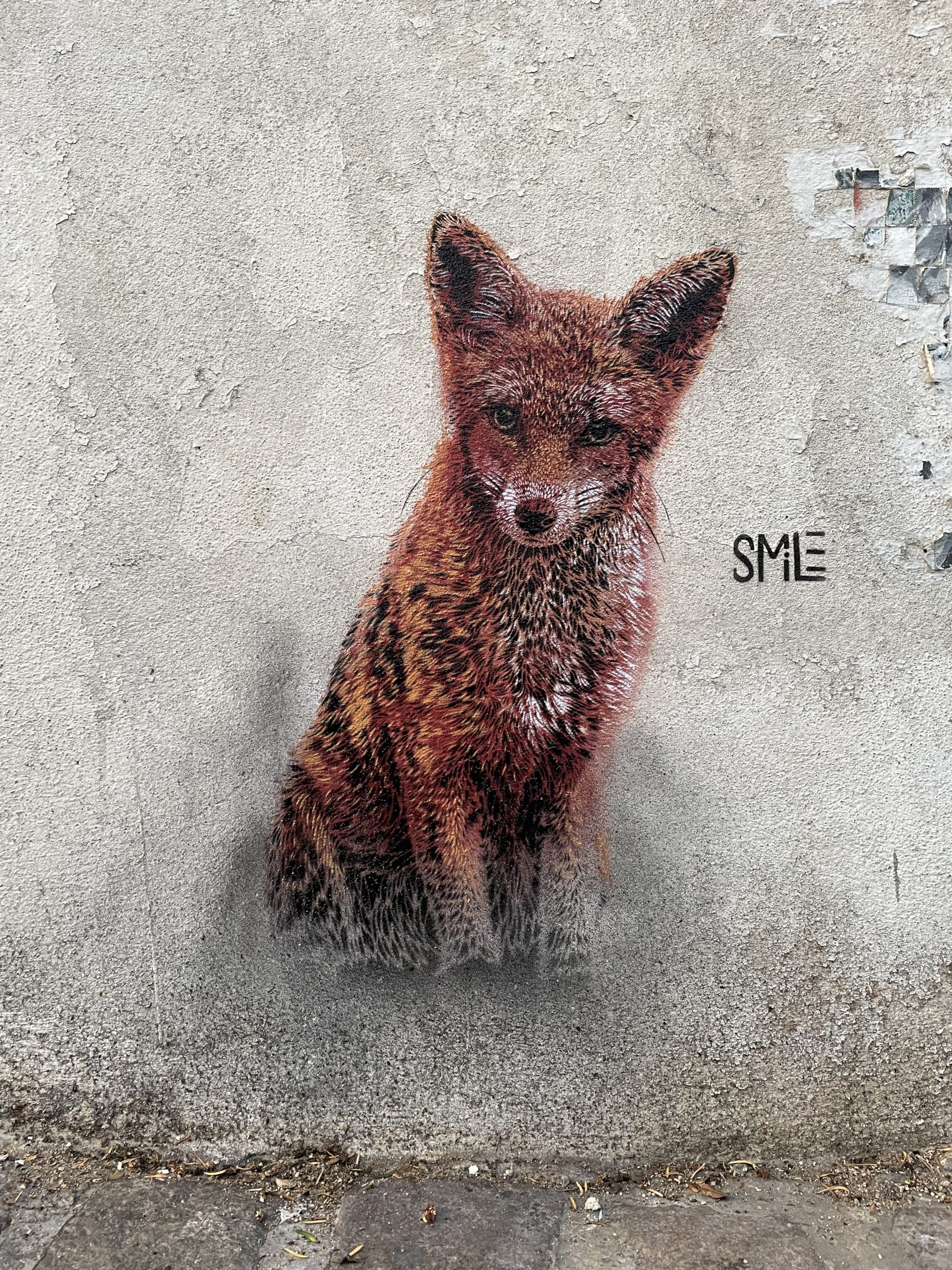 “I realized at some point, after seeing my work on the streets of Paris, that a piece of illegal art can still be beautiful and make people happy.” – SM1LE