MIAMI — GZ.JR is a street artist from Venice Beach, California, but today he is 2,747 miles from home at the corner of 5th Ave. and 23rd St. in the Wynwood section of Miami. Suspended about six feet above the sidewalk on a powered scissors lift, he is holding a can of MTN 94 spray paint and is about to put the finishing touches on a mural of Puerto Rican rap megastar Bad Bunny.

“Graffiti art, street art, is free and accessible to everyone,” he says, touching up the reflection in one of the lenses in Bunny’s shades. “Everyone loves it and you don’t have to pay like $80 to go to one of the big shows over there,” he adds, pointing eastward. 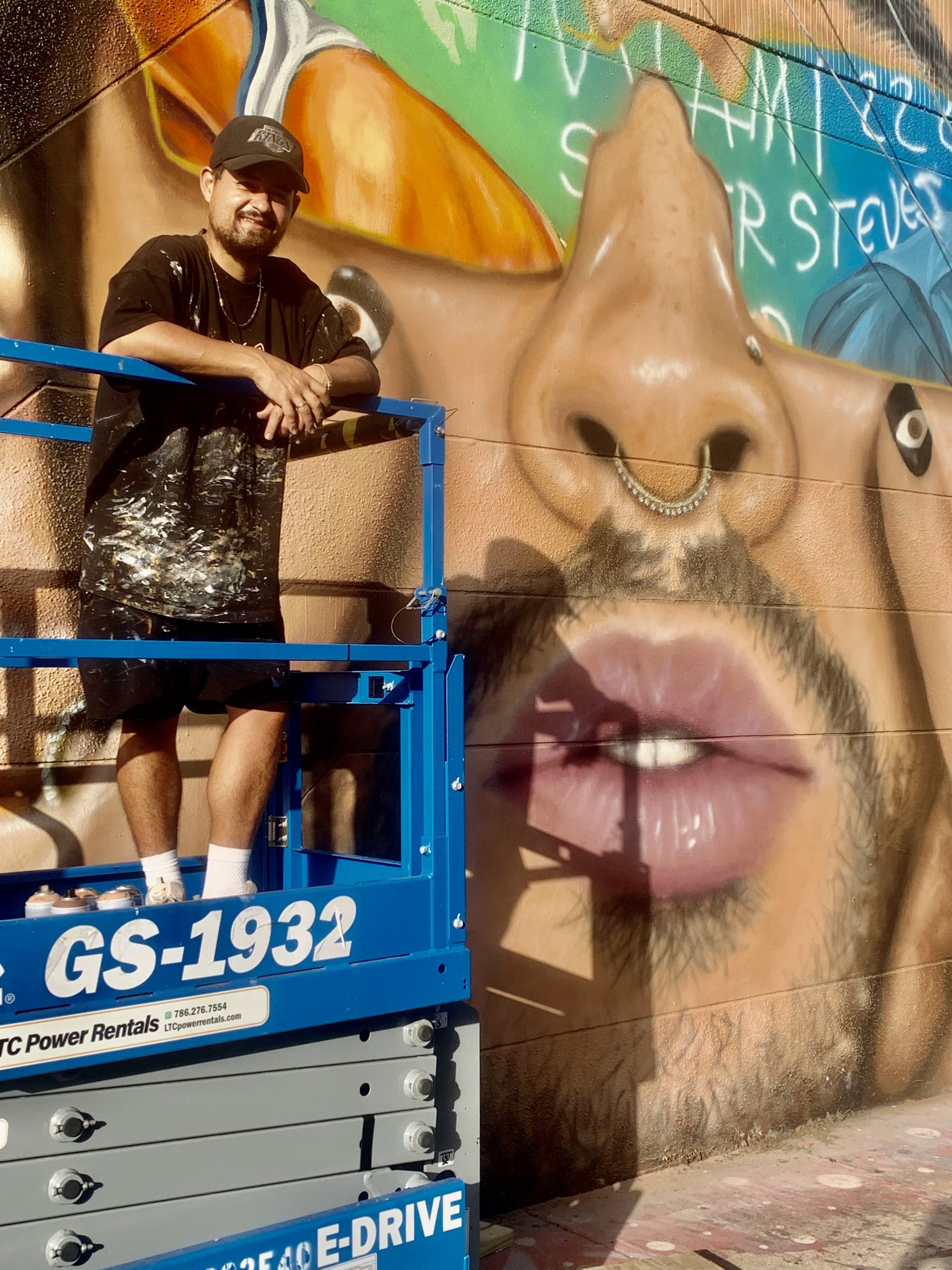 “Graffiti art, street art, is free and accessible to everyone.” – GZ.JR

Eastward, of course, is Miami Beach, which each December plays host to the art establishment’s most important contemporary art event, Art Basel, a glimmering showcase of the latest work curated by elite gallerists and supported by monied art collectors who fly in from around the globe. But a funny thing has happened to Art Basel and the other art fairs that make up Miami Art Week, they are finding it harder and harder to resist street art’s momentum.

Sure, the various fairs have long featured the work of established artists that got their start in the streets – Jean-Michel Basquiat, Keith Haring, Banksy and so forth. But today you’ll find work from Shepard Fairey, Kenny Sharf, New Jersey’s Joe Iurato, Miami’s Atomik and NYC’s Sinclair the Vandal, just to name just a few, on display at Miami Art Week fairs. And in addition to the big dance, Miami’s street art mecca of Wynwood transforms itself each year into an open air street art extravaganza with new murals, pop-up exhibitions, live painting, and partying that far outpaces the more staid champagne and cocktail receptions that take place across the Biscayne Bay. 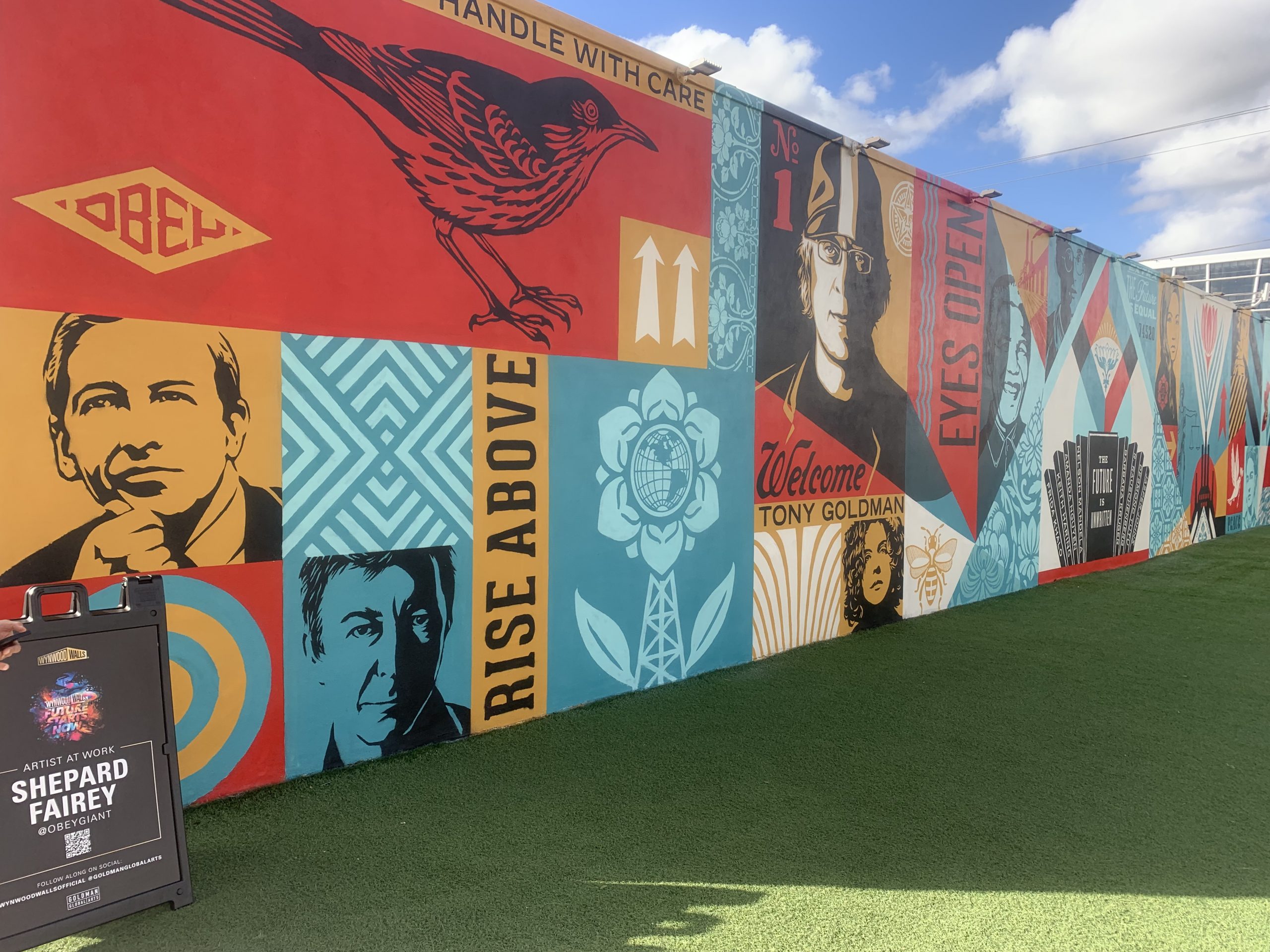 “The cops shut us down last night, it got too crazy and the barriers started moving into the street.”  – Leviyev

“The cops shut us down last night, it got too crazy and the barriers started moving into the street,” said Leviyev, a NYC street artist and organizer who was setting up another live painting event along 2nd Ave, Wynwood’s Main Street. “We should be ok tonight, though,” he said as the crowd along 2nd was just beginning to swell.

That street art’s assault on the art world’s rarified upper echelons has Miami as an important beachhead should come as no surprise. The city, and its Wynwood neighborhood in particular, have been at the epicenter of street art’s rise since at least 2009 when Goldman Global Arts sparked a neighborhood renewal and a public art explosion with the opening of the acclaimed Wynwood Walls outdoor street art gallery.

In a recent interview with Us Weekly, Jessica Goldman Srebnick, the co-chair of Goldman Properties who curates Wynwood Walls, credited Art Basel with changing Miami’s creative landscape by focusing the art world’s attention on the region and sparking the growth of Miami Art Week as an important event on the annual art calendar. 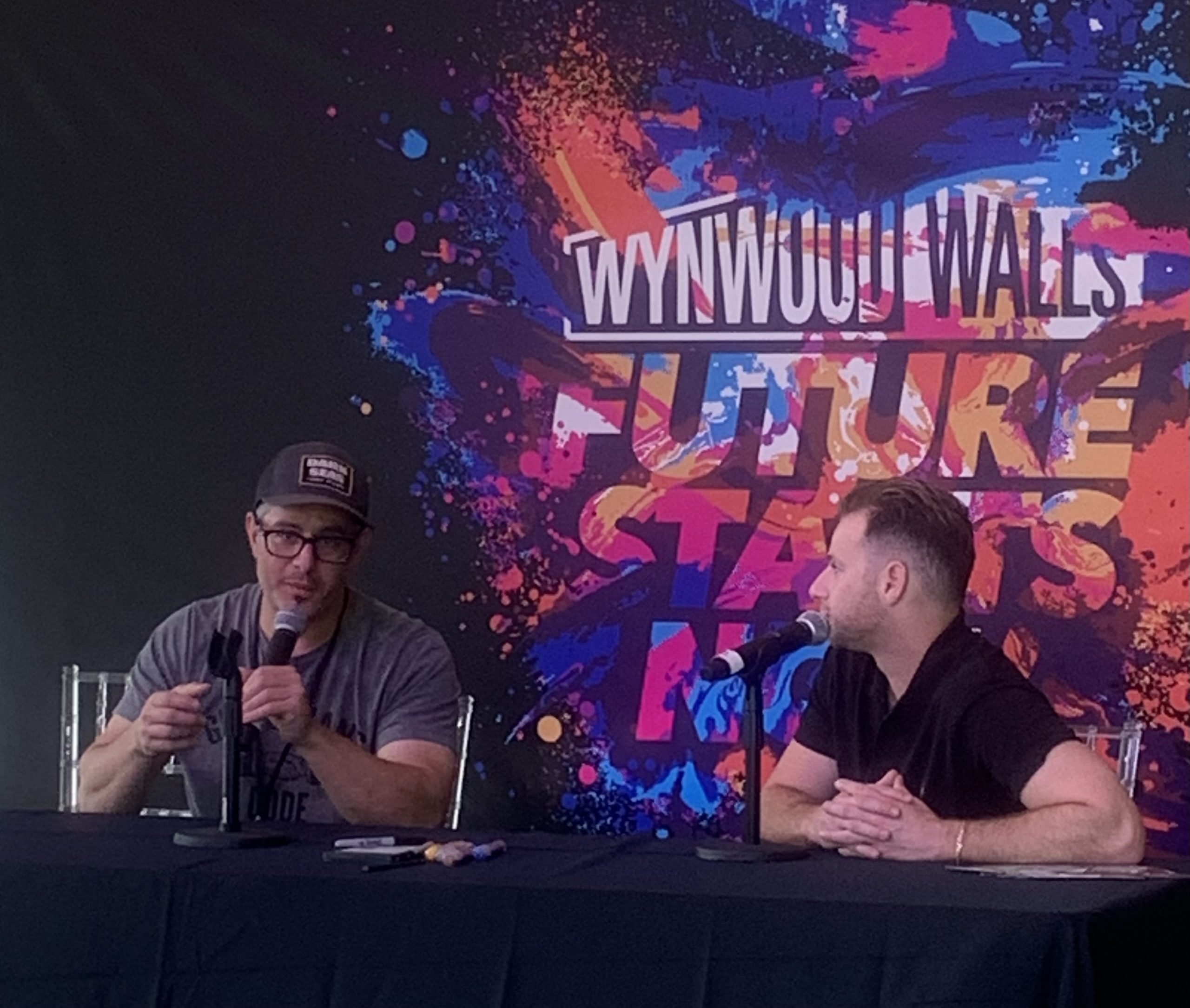 “For us at the Wynwood Walls, it is an opportunity to bring the most exciting artists on the planet to the public.” – Jessica Goldman Srebnick

“It is a week to shine a spotlight on all things innovative, and for us at the Wynwood Walls, it is an opportunity to bring the most exciting artists on the planet to the public,” she said. During art week, Wynwood Walls hosted events and new artwork by Shepard Fairey, Ron English, Buff Monster, Joe Iurato, Dulk, Hebru Brantley, Bicicleta Sem Freio, Faile, Tats Cru, Tristan Eaton, Drik the Villian, and many others.

Ten years after Wynwood Walls opened, the Museum of Graffiti opened around the corner with a mission of providing education, context and history on graffiti art. “This is really more narrowly focused on graffiti history and the educational aspect,” Allison Freidin, the museum’s co-founder told UP in 2019. During art week, the museum hosted events featuring Lady Pink, Todd James, Merlot, Esteme, Fel, Ledania, and Mavel and the USA Breakdancing Nationals judged by Speedy Legs, Beta Rawk, and B-Boy Bebe.

Art Basel arrived in Miami Beach eight years before Wynwood’s rise began at a time the region was at its nadir. “Miami was perceived as God’s waiting room,” Robert Goodman, one of Art Basel’s chief early backers said in a story commissioned by the art show. “Then it was perceived as a home for drugs and cocaine and crime. We changed the image of Miami,” he added.

Ron English, the renowned street artist, agreed. “You’d get killed down here in those days, now look at it,” he said during a visit to Wynwood Walls.

In an interview with UP Magazine, English said the fine-art establishment had little choice but to bow to street art when collectors began to notice that the works they were seeing on the street rivaled, or even outclassed, what was being fed to them by elite gallerists. 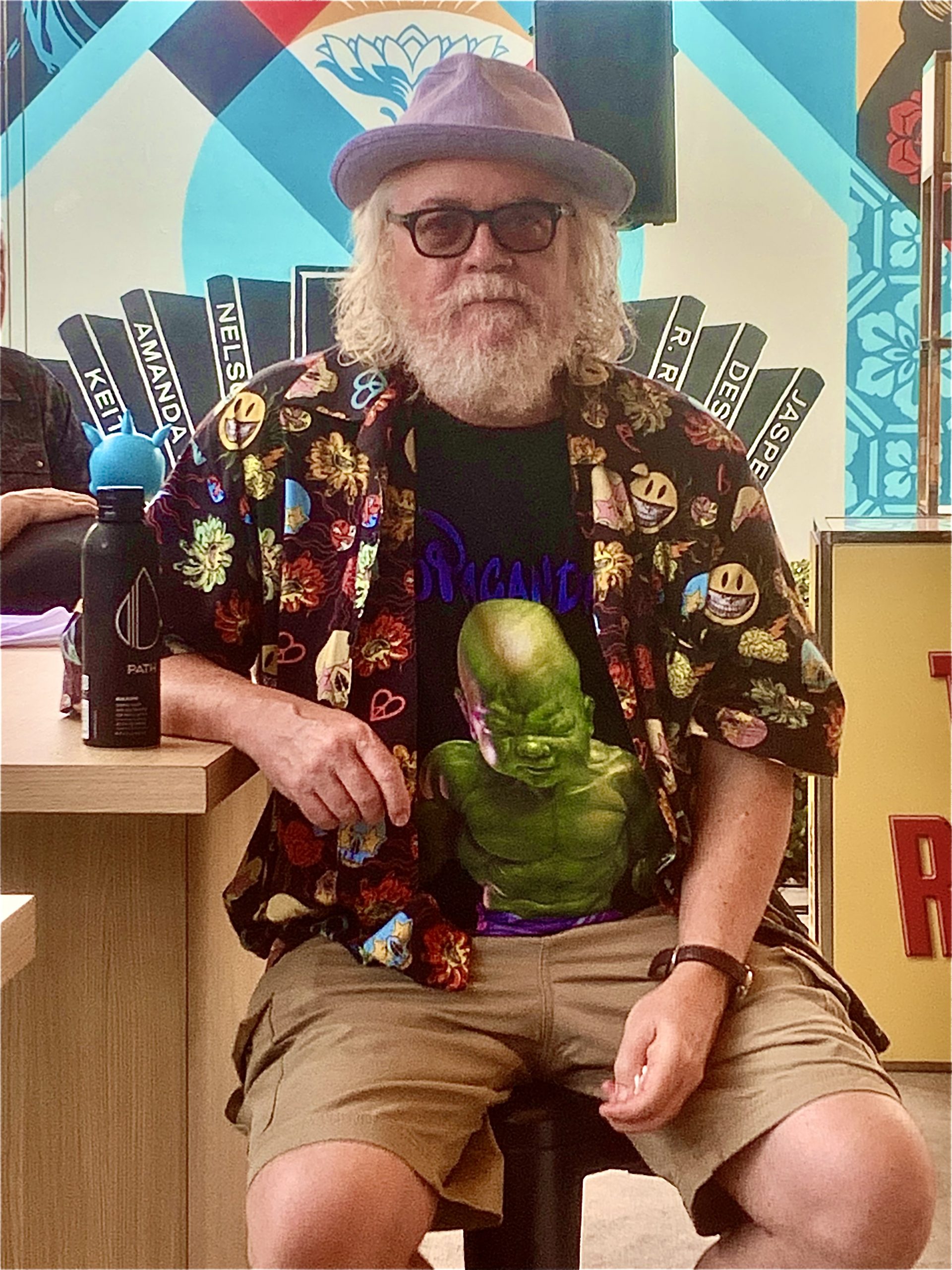 “Some collectors said ‘you know what, fuck you. I’m tired of this bullshit art.” – Ron English

“Some collectors said ‘you know what, fuck you. I’m tired of this bullshit art.’” Collectors said to the elite gallerists: ‘You owned the art world, well you don’t own it any more.’ It’s been a revolution and I’m glad I lived to see it,” he said.

Atomik, the legendary Miami street artist who’s smiling orange character is beloved by locals and tourists alike, has been working in the streets since before Art Basel made Miami one of America’s foremost centers of contemporary art. 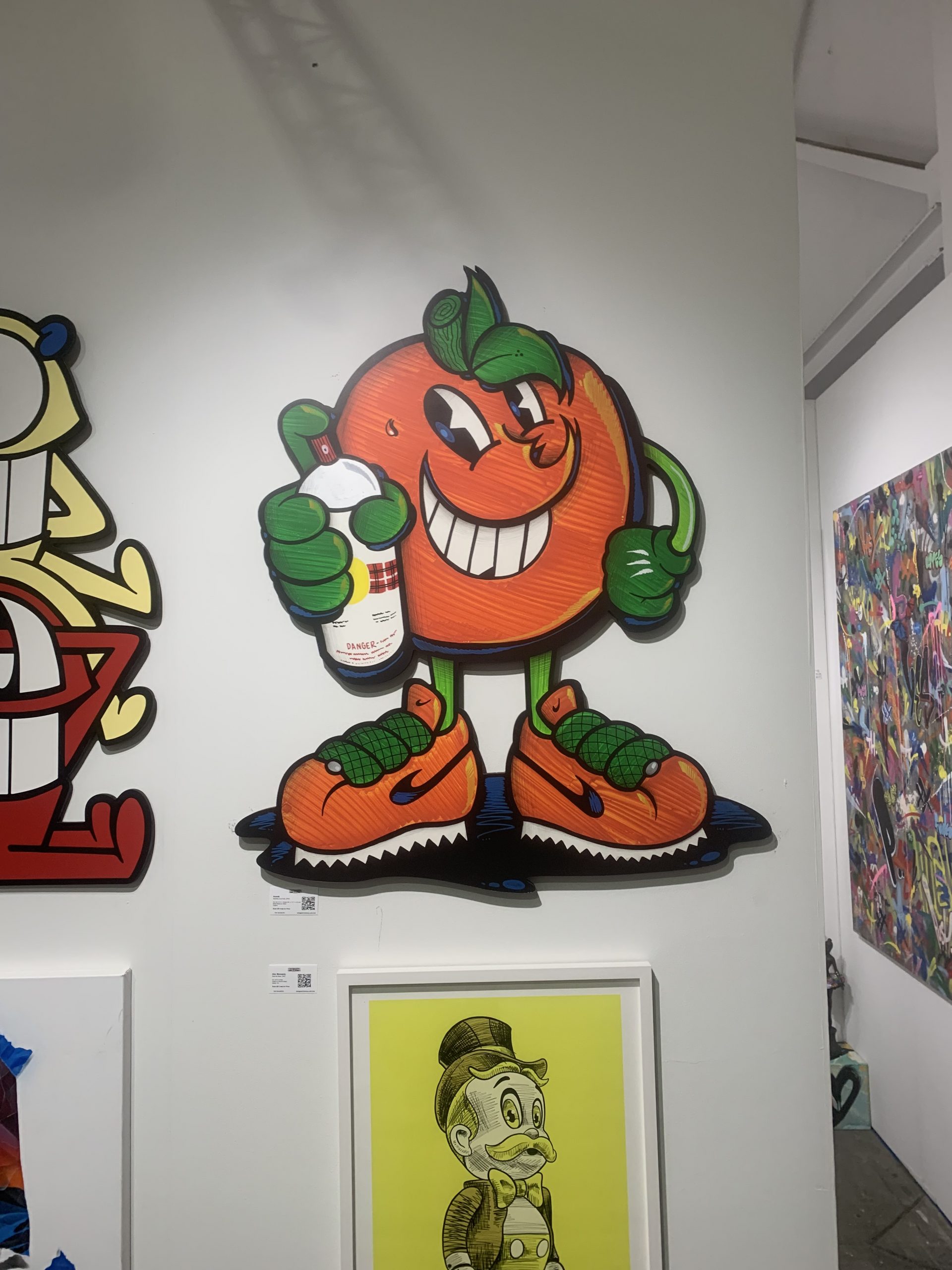 “Now you’ve got a lot more recognition of street art and the artists behind it including a lot of the pioneers like Crash and Futura and Daze.” – Atomik

“Probably the first 10 years or so  there wasn’t much attention being paid to spray can art, or graffiti art. Now you’ve got a lot more recognition of street art and the artists behind it including a lot of the pioneers like Crash and Futura and Daze,” Atomik told UP in an interview.

While his art appeared in several of the big fairs, Atomik, like many local street artists, likes to take advantage of the huge flow of art lovers with pop-up events on the outskirts of the big events. He did live painting events at several locations and hosted a highly successful solo show at his studio on NW 7th Street in Wynwood.

“I sold a bunch, but I don’t judge the success of a show on sales, it’s more the energy and whole vibe throughout the night that made it such a great success. We had a great turnout and a lot of different people that were probably only here because of Art Basel,” he said.

Diana Contreras, the Miami street artist known as Didirok, said she has witnessed the gradual acceptance of street art in the mainstream world of the Art Basel shows, having shown her work at Art Miami, one of the biggest art week fairs. 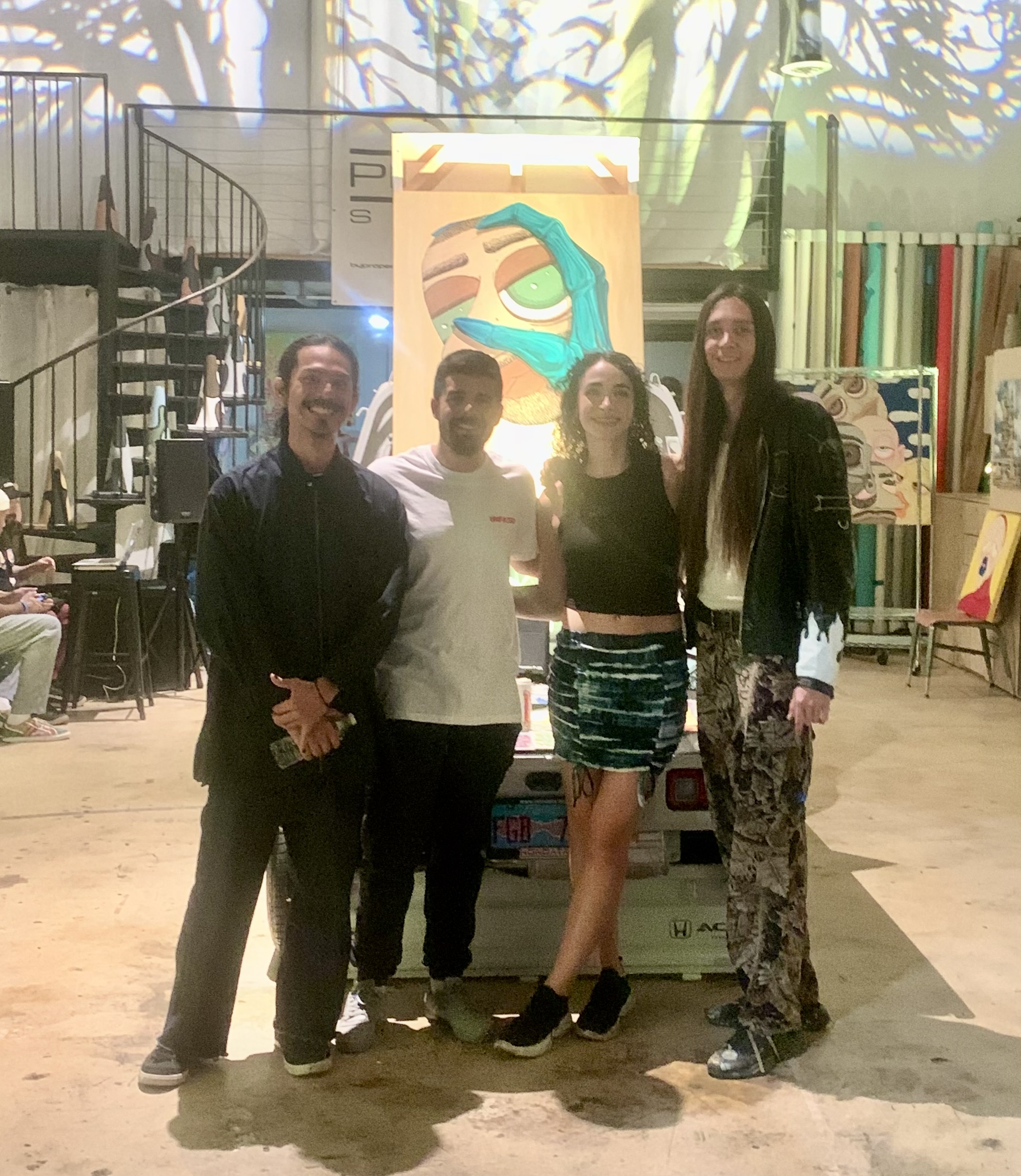 “Definitely throughout the years I have seen the two art worlds coming together with street art being included by the galleries and by the fair itself.” – Didirok

“Definitely throughout the years I have seen the two art worlds coming together with street art being included by the galleries and by the fair itself,” she said, adding that showing at the fairs can help showcase the work of street artists and provide a level of validation in the gallery world.

A pair of New York street artists who were showing their work at Aqua Art Miami, Sinclair the Vandal and 0h10 M1ke, attended Miami Art Week for years before getting their work into mainstream fairs.

“It’s an emerging power house,” said Sinclair. “So many artists who came up doing art in the streets are now showing their work in galleries and these are people whose work might not have been recognized otherwise. It’s no longer the fringe of the art world,” he said.

“Take a look at all the street artists that are now part of the major fairs taking place in Miami. Art Basel is amazing, but if you’re not also looking at Wynwood, you’re not seeing the entire picture of contemporary art today,” 0h10 M1ke added.

Back over in Wynwood, in a garage off 7th Ave., a group of street artists gathered in a garage pop-up exhibition they called the Collaborators. Among them were Robert Blanco, Optimo, Humble, Lala, and Jona. They were united in their belief that street art is having a historic impact on the art world and that the trend is not going to die out any time soon.

“People are making art that is more personal and more intimate and art lovers are reacting positively to that, so the galleries and big shows are taking notice. Street art is breaking down the elitist network that controlled the art world for so long,” NYC’s Lala added.

On 5th Ave, GZ.JR was wrapping up work on his Bad Bunny piece for the day and at the same time discussing how street art has become a democratizing force in the art world. 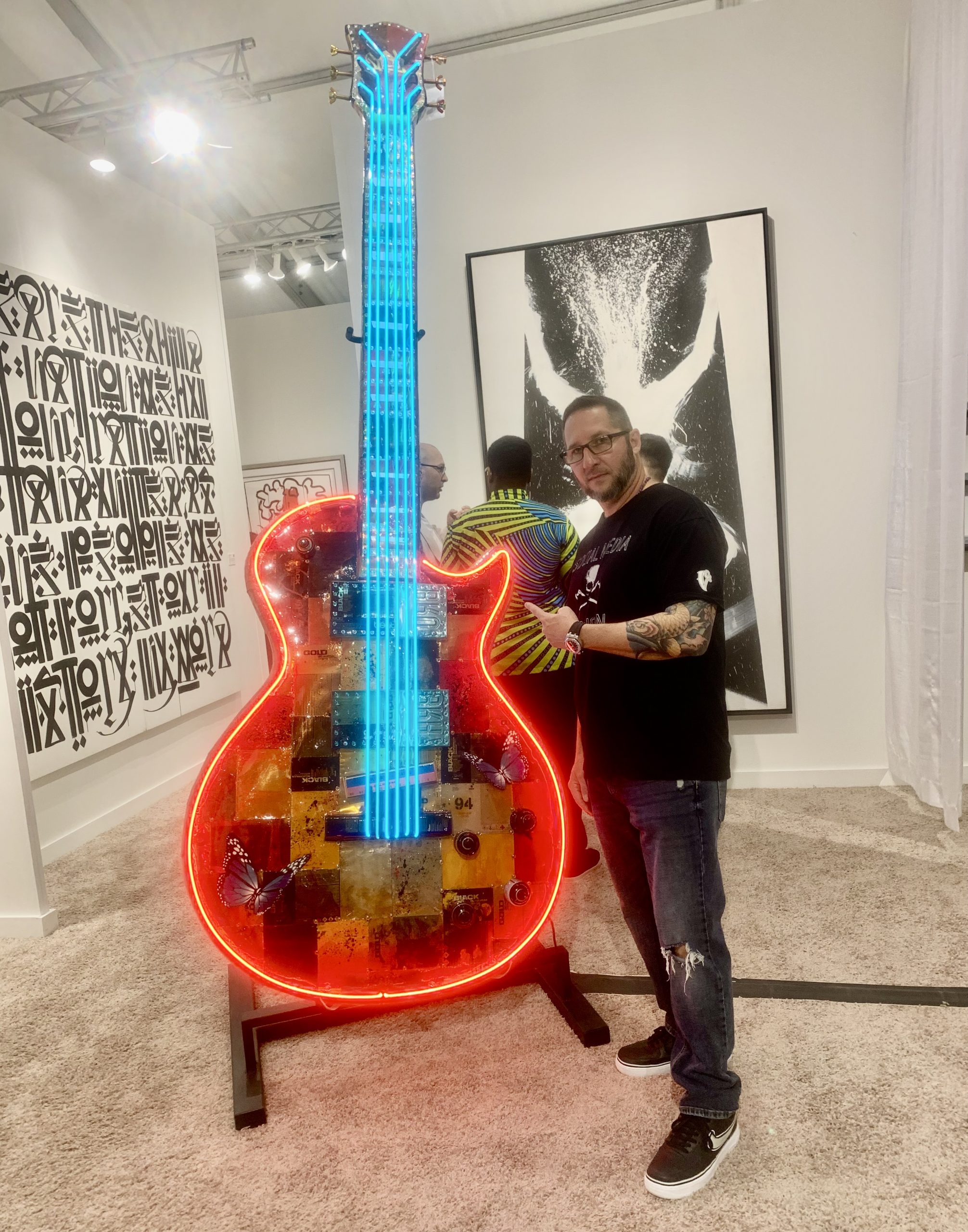 “Street art has opened up the art world, not just for artists, but for everyone.” – GZ.JR

“There is no one telling anyone what’s good art and what’s not. If people like it, if they’re inspired by it, then it’s good art, it doesn’t matter what the curators at the big art shows and galleries say,” he said

“Street art has opened up the art world, not just for artists, but for everyone.”