Graffiti, street art, and murals are often considered one monolithic entity. However, they really only share the common perception of being illegal. Graffiti and street art can’t shake their vandal connotations due to a lingering cultural association with gang activity. Graffiti has always faced opposition, based on everything from aesthetics to property value. One of the most opposed movements was the Subway Writers Movement in New York during the 60s and 70s. These art forms persist despite all attempts to cover up and criminalize them. Graffiti New York by Eric “DEAL CIA”  Felisbret and Beyond The Streets, compiled by Roger Gastman, describe the culture’s history and expose the circumstances perpetuating these misconceptions. 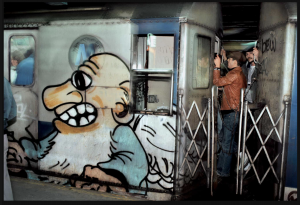 Differentiating between the terms ‘street art’ and ‘graffiti’ provides a big step in learning each form’s distinct legacy. Graffiti has both Italian and Greek Origins, in Italian it is derived from “graffiato” meaning scratch. In Greek, it means “to write”. Graffiti is all about ego, writing your name out there to be seen by as many people as possible. Street Art is a more aesthetic term that refers to image-based works including posters, stickers, stencils, or any other huge display. Mural has Latin Origin, from the word “Murus,” meaning wall. Murals usually span large surfaces like billboards, while street art can be on any significantly smaller surface from doors, to poles and even fire hydrants.

Differentiating between the terms ‘street art’ and ‘graffiti’ provides a big step in learning each form’s distinct legacy.

My first memories of graffiti conjure my elementary school’s girls bathroom. Groundbreaking, often neurotic gossip or recent developments spread to show which teacher had been a bitch lately, who’s got a crush on who, various phone numbers, et al. “Ms. Caputo’s a bitch,” one of my classmates had scrawled of our music teacher. Administrators condemned the writer, only magnifying the anonymous revolutionary’s infamy. A treasure trove of intimate information, this graffiti was a step beyond schoolyard communication. Everything was written crudely in ballpoint pen ink, or black sharpie. If you were really courageous, you’d also dig in deep and scratch in your name, literally. A real effort to make your mark in a school bathroom, one they can’t erase that no matter what. 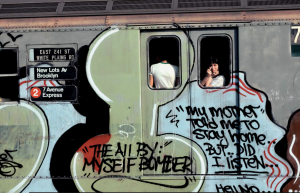 There have been disputes about who really started the graffiti movement. Graffiti has been around since cavemen etched markings declaring love and scribbling names. Some have even been found in the ruins of Pompeii. In an essence, graffiti has existed since the beginning of time, and has only been repopularized over and over since. 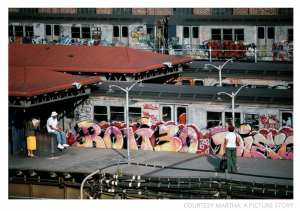 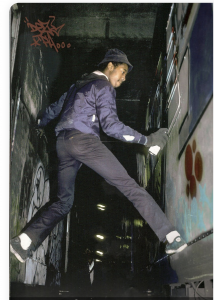 Graffiti was universalized by children looking for ways to pass time. Writing monikers with multicolor letters on freight cars, brick walls, subways — anywhere they could find. This became a common way to communicate and meet across neighborhoods. As these kids grew into teenagers and the movement evolved, roots of a community formed, and tagging became a way to be seen by this community.

Graffiti was universalized by children looking for ways to pass time. Writing monikers with multicolor letters on freight cars, brick walls, subways — anywhere they could find.

At its core, graffiti is about getting your name out there, striving to be seen. Still, graffiti possesses negative connotations, connected to criminality or inciting teenagers to engage in gang activity. The notion possesses some merit —  gangs initially did pay kids who were messing around with petty drawings or street names, and initiated them to spray paint the gang’s name as a way of marking territory.Initially, this spurred a conflict between gangs claiming territory and an uprising in violence, versus actual artists wanting to create and be known. Contrary to popular belief, many prolific artists claim graffiti was a way for them to stay out of trouble at that time, and away from joining gangs. 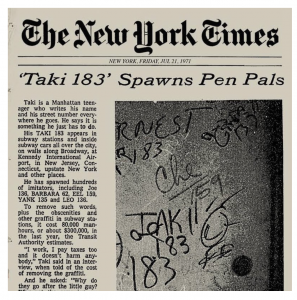 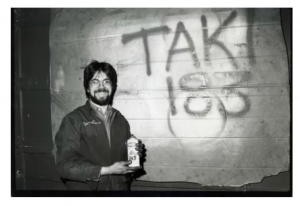 In New York, graffiti writer TAKI 183 has been thought as the first to popularize graffiti, as his work in the media in 1971. The New York Times had a hand in covering his work and increasing public interest in graffiti. However, TAKI claims he didn’t start it, that all credit should go to Julio 204, an artist who inspired him to start writing. As it turns out TAKI 183 lived in Washington Heights while Julio 204 operated in the adjacent neighborhood of Inwood. JULIO 204 was the first significant writer, but he predominantly stuck to his own neighborhood. TAKI’s work went beyond Washington Heights, which led him to gain prominence.

TAKI 183 was a high school student named Demetrius. Many of the prominent artists at the time were his peers. TAKI is a common moniker for Greek males, as he and his family were from Greece, and Washington Heights was, at the time, a predominantly Greek and Puerto Rican neighborhood. 183 was his street number. He and his friends started writing graffiti, inspired by the explosion in artists and political stickers. TAKI’s job as a mail courier granted him access all over the city to continue making his mark, because he got his work across neighborhoods beyond his own, and beyond his borough. 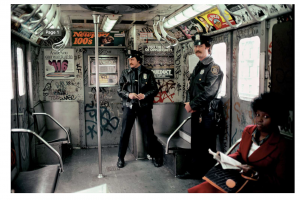 A parallel narrative finds its roots in Philadelphia. An artist named Cornbread gained notoriety in 1965, rambunctiously taking credit in starting the movement. He goes so far as to say he was the only one doing it in the world, specifically with spray paint, which may or may not be true.

At this time, the movement started taking hold amongst communities. Although graffiti existed as a subculture in pockets before this prominent resurgence and specific era, the street name along with specific aspects of lettering and color choice, created community and solidarity among artists, making it stand out from other movements. As much as the criticism of graffiti comes from a colonial mindset and definition of vandalism, it does not exist for the general public, or the public’s consumption. It exists to be communication to other artists.

As much as the criticism of graffiti comes from a colonial mindset and definition of vandalism, it does not exist for the general public, or the public’s consumption. It exists to be communication to other artists.

1972 was a pivotal year for graffiti artists. Media attention was becoming widespread. There was a heightened need to get your name out there, to take part in the game. It became clear the subway system was the fastest, most efficient way to get one’s name out there. An artist by the name SUPER KOOL 223 changed the game by tagging subway cars in big letters with thicker outlines. It’s important to note that because New York was in disarray and facing a financial crisis, no initial efforts were budgeted towards the erasure of graffiti. The resulting works are commonly referred to as “masterpieces.” Iconic images of New York in the 1970s highlight these subway cars, most often photographed by Martha Cooper and Henry Chalfant.

Graffiti went from a teenage pastime to a full time gig. The scene became increasingly competitive, and many different styles began to emerge. The Writer’s Code established solidarity among artists to truly create masterpieces while growing the form. It was still about fame, but now there was more emphasis on the craft and execution of the piece.

Artists began developing their specific styles, finding their distinct niches. There were two types of pieces, “top to bottom” whole-car and scenery whole-car. Scenery cars had an emphasis on landscapes, illustrations, and cartoon characters. Many of the “top to bottom”, also referred to as masterpieces while also being accompanied by illustrations or cartoons, took up the length and width of the car. 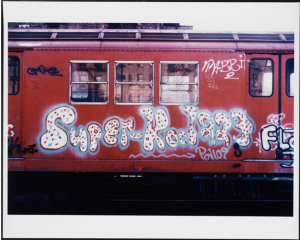 Soon a majority of the subways were covered in graffiti, an iconic embodiment of the 70s movement. The stakes were higher, and to be seen was coveted. Hugo Martinez formed United Graffiti Artists (UGA) in 1972. Many writers joined the collective, voted on prospective members, and were given wall space to write. In Beyond The Streets, Martinez says this was an effort to give the writers another space to collaborate rather than compete, as well as help hone their craft.

In Beyond The Streets, Martinez says this was an effort to give the writers another space to collaborate rather than compete, as well as help hone their craft.

The work of the UGA led to an artist collective  and showcase at The Razor Gallery in SoHo. Many New Yorkers were unaware about the wide scope that graffiti had in the subway, and in the late 70s, MTA started cleaning the cars, to no avail. These tactics did not discourage writers from continuing to write. writers then began to stake out territory in train yards. Writers focused on tagging walls rather than train cars. The sudden interest within the gallery scene certainly helped a few artists keep up with their craft.

By 1984, the MTA stepped up its Clean Car Efforts. The agency stopped running cars that had graffiti on them, until they were completely cleaned. Their Five Year Plan included cleaning each line one at a time, causing massive delays. The MTA was unsuccessful despite these efforts due to the writers’ determination and passion. Many simply refused to stop writing.

By 1986, the MTA’s efforts were successful, and a majority of the subway lines were graffiti-free. The MTA created a full Police Vandal Squad, which finally forced many of the prominent writers to stop writing. Because of their passion, it took MTA seventeen years to fully have “Clean Cars” in 1989.  The last lines that had graffiti on them were the B,D,L,J, and M lines.

Because of their passion, it took MTA seventeen years to fully have “Clean Cars” in 1989.  The last lines that had graffiti on them were the B,D,L,J, and M lines.

The MTA truly never had a victory with the movement. Though we don’t see as much graffiti on the subways, the movement continues to prosper worldwide. The work of the artists and the documentation of Martha Cooper and Henry Chalfant spurred a movement and created a very specific image of what New York was at the time. Even today as graffiti continues to grace billboards and buildings, the city finds itself in a similar situation: Unable to fund its erasure.

Street art continues to be prominent among various neighborhoods. These subway cars continue to be a staple image of a New York that despite all odds, prospered. Had it not been for the untethered resilience of so many artists to keep going and the photographs taken by Martha Cooper and Henry Chalfant, this movement would have been lost. However, just like any minute in New York, the city and its art continues to change one after the other. As long as kids have pens worldwide, they will always find reasons to write.