Graffiti HeArt in Cleveland somehow made attending a talk with two of the most famous graffiti writers of all time feel like I was at a house party with friends. Singer-songwriter Alexis Ante played a lilting cover of Fleetwood Mac’s “Dreams” in a dimly lit room as I sipped a glass of a local winery’s Rust Belt Rosé and watched as Taki 183 and Blek Le Rat made history together. Graffiti HeArt boasts a number of Cleveland road signs and metallic subway doors from the RTA, the city’s public transit system. Everyone seemed at ease, and all ages and walks of life meandered in and out of the building for smoke breaks near the outdoor DJ booth or snacks from the exquisite table of baked goods Graffiti HeArt catered. 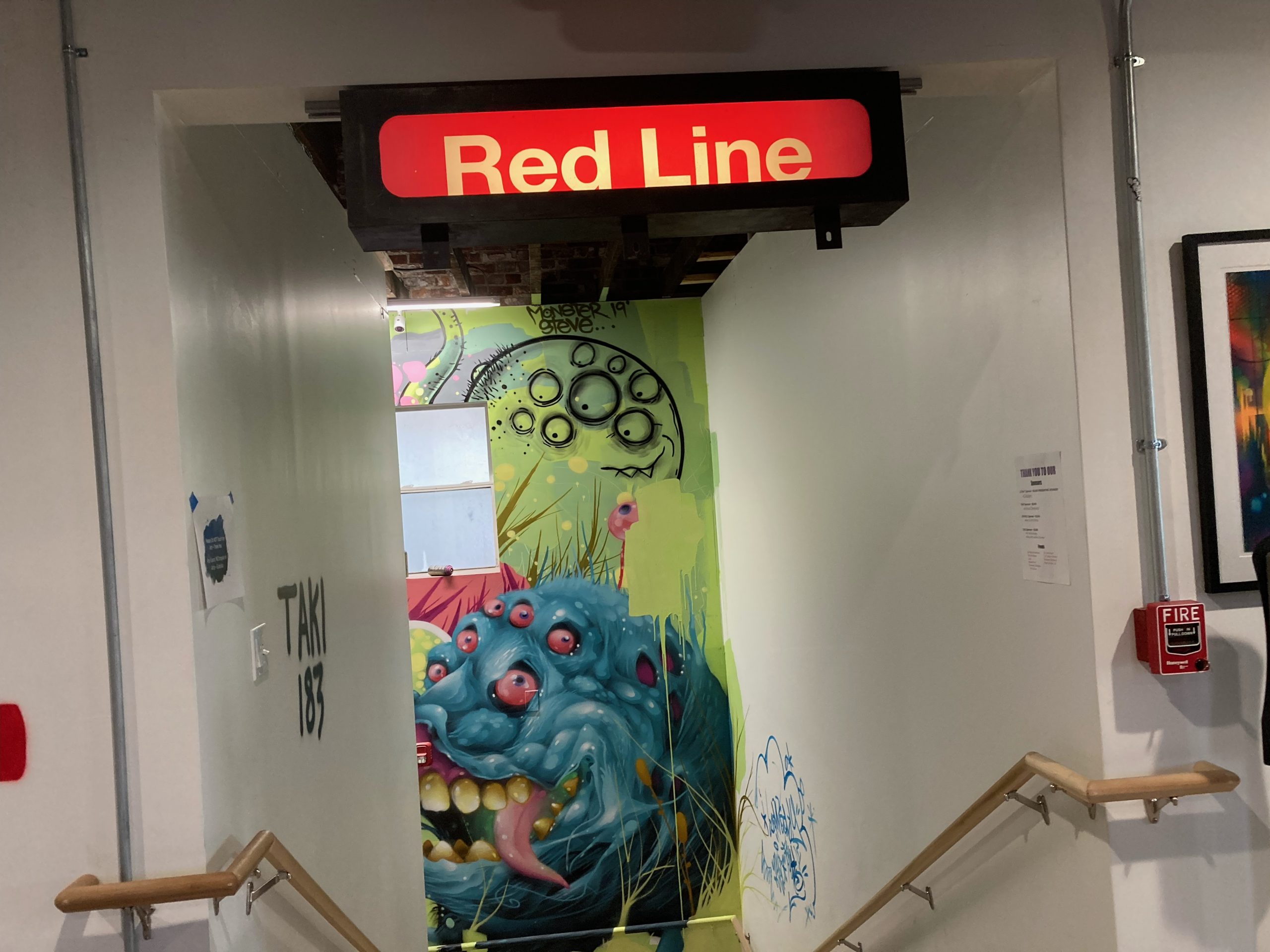 “The event really drew such a cool crowd. People came because they understood how special this was. All the way from Indiana and Kentucky and Michigan and West Virginia—and you from Pennsylvania!” Graffiti HeArt founder Stamy Paul recalled to me over the phone during a conversation reflecting on the night. It’s true that I took a slow, smelly bus from Pittsburgh to Cleveland to see Taki and Blek, but it wasn’t my first time. Almost exactly a year prior, I made the same trip to see Taki, Mike 171, SJK 171, JEC *, and Henry 161 give a panel on their experiences in the early graffiti movement. I’d just moved to Pittsburgh only a few days before, and the “boys from the Heights” gave me a taste of home when I was grappling with living away from the familiar streets of Washington Heights for the first time, save for the brief stint in my childhood of living in western France. It felt like strange cosmic luck that Taki 183, who made the Heights the mecca of graffiti, and Blek le Rat, who put graffiti on the map for France, converged in the Rust Belt, my new home.

Le Rat and Taki 183 had been aware of each other for decades, but the weekend they spent in Cleveland was their first time formally meeting. It was clear watching their camaraderie that the pair were fast friends with more in common than they knew. Paul opened the Q&A session between the two artists by jokingly asking “Are there any Greeks in the house?” The joke was that Le Rat, Taki, Paul, and all of Paul’s extended family in attendance are Greek-Americans. Maybe that was why it had the feeling of a jovial, casual gathering rather than a banquet in the hallowed halls of a metropolitan museum. That isn’t to downplay the importance of it, though, because however laid-back the vibe was, it was clear I was witnessing something incredible taking place

Blek and Taki had collaborated on several pieces throughout Graffiti HeArt, including one of Blek’s trademark black and white stencil figures depicted holding a paintbrush with Taki’s tag next to it. “It’s hard to put stencils on brick, because the surface isn’t even. This stuff takes hours,” Taki explained to me. “Blek and his wife painted, and then I added it in at the end.” Blek’s layered, figurative stencils are a clear contrast to the crisp clarity of Taki’s tag, but, somehow, they felt as if they belonged together. The word that came to mind was symbiosis—that both artists from two different continents each brought their own style and created something unique. 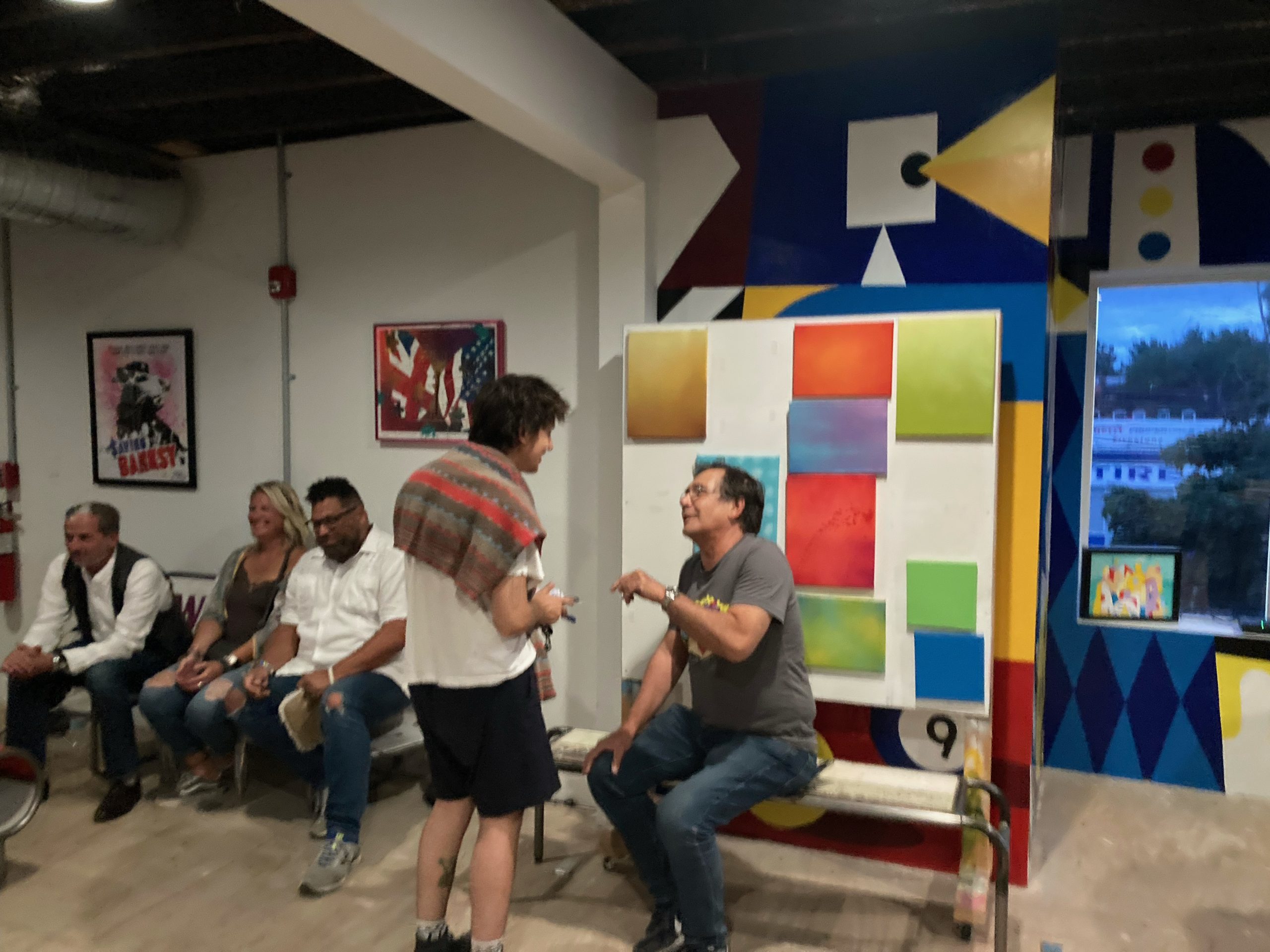 I observed as Gordon Victoroff, a stencil artist from Portland, Oregon who’d just happened to be in town that day, had Blek and Taki sign his Graffiti HeArt postcard. Victoroff was starstruck, as he told me in a side conversation, to even get to be there and see Blek and Taki in person. With how humble both are, it’s easy to lose sight of the immense impact their work has had on art history.

Taki addressed the subject of fame for graffiti with the perfect quotable oxymoron: “I wanted to be anonymous, but I wanted everybody to know me.” I was struck by Taki’s down-to-earth nature the first time I met him, eating rice and beans in an Airbnb with the other “boys from the Heights” and finding myself speechless that I was next to Taki 183 at a dinner table. That down-to-earth wit came through this time, too, particularly when an audience member asked if he’d ever met Andy Warhol during his period in the New York art scene. “Well, he asked me to come down, but I was supposed to play frisbee in the park, and I decided I’d rather do that,” Taki said. “Some of the other guys, oh, they went down there and got to meet Warhol and have their picture taken. But, hey, the park was pretty fun!” 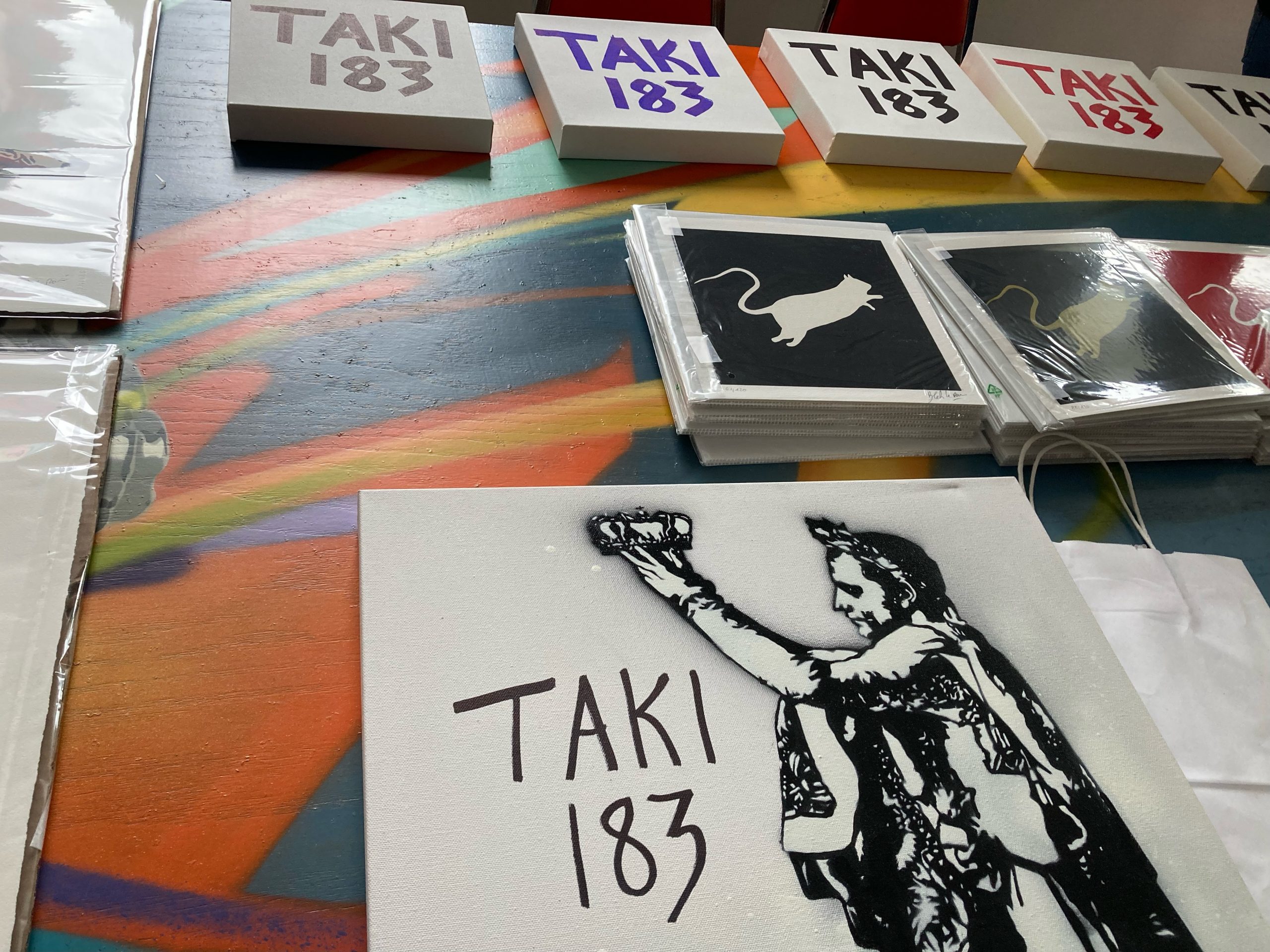 “I wanted to be anonymous, but I wanted everybody to know me.”

Blek Le Rat is similarly unconcerned with appearances, demonstrated by the fact that he represents himself with a rat, one of the least glamorous creatures in the animal kingdom. But he likes it that way. “There are so many rats in Paris,” he said. “And with my name I wanted to show the people of Paris—you live in the most beautiful city in the world, but there are still rats everywhere!” Beyond that, RAT is just one letter from ART, showing that all it takes is a tiny shift in perspective to take something from a sewer to a museum. “I believe street art is the art of the twenty-first century,” Blek said. “But it would be very sad if nothing remained from the ‘60s, so we are here to talk about the history.”

“There are so many rats in Paris. And with my name I wanted to show the people of Paris—you live in the most beautiful city in the world, but there are still rats everywhere!”

Stamy Paul agreed with the importance of preserving street art history. “I think about one hundred or two hundred years from now, looking back at the archives, what people will think of this meeting,” she said. Though Blek and Taki were never particularly interested in being on gallery walls, they see graffiti as having an immense power that needs to be shared with people. “The reason street art is illegal is because it has power,” Blek said in the question-and-answer segment of the night. “If it didn’t have an effect on people, the law wouldn’t care.” 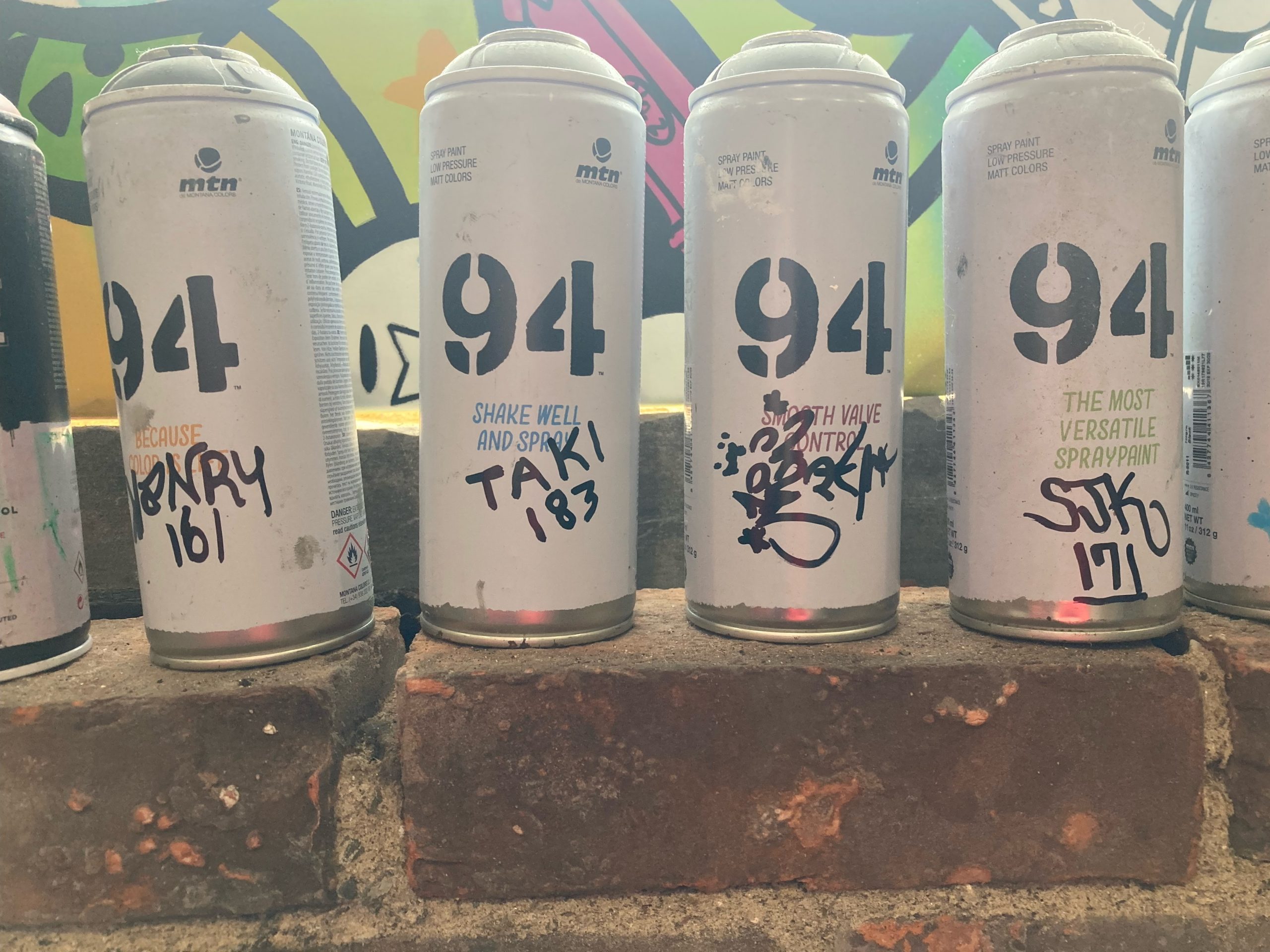 “The reason street art is illegal is because it has power. If it didn’t have an effect on people, the law wouldn’t care.”

The past few weeks have certainly been eventful for Blek Le Rat, with debut shows in New York and Texas. But I found myself glad that I no longer lived in the city of my birth and didn’t see Blek at a crowded gallery in Chelsea. New York is home to the mecca of graffiti, but there’s something special about Graffiti HeArt. It’s a place with a homey feel where I struck up a conversation with two Ashland, OH locals and laughed about how Ashland is home of the meme-famous “Grandpa’s Cheese Barn.” Paul’s space has an easygoing openness to it that so many art spaces lack, as exemplified in the grassroots organization’s mission of A.W.E.S.O.M.E, standing for Art Walls Education Serving Our Mission Everywhere. 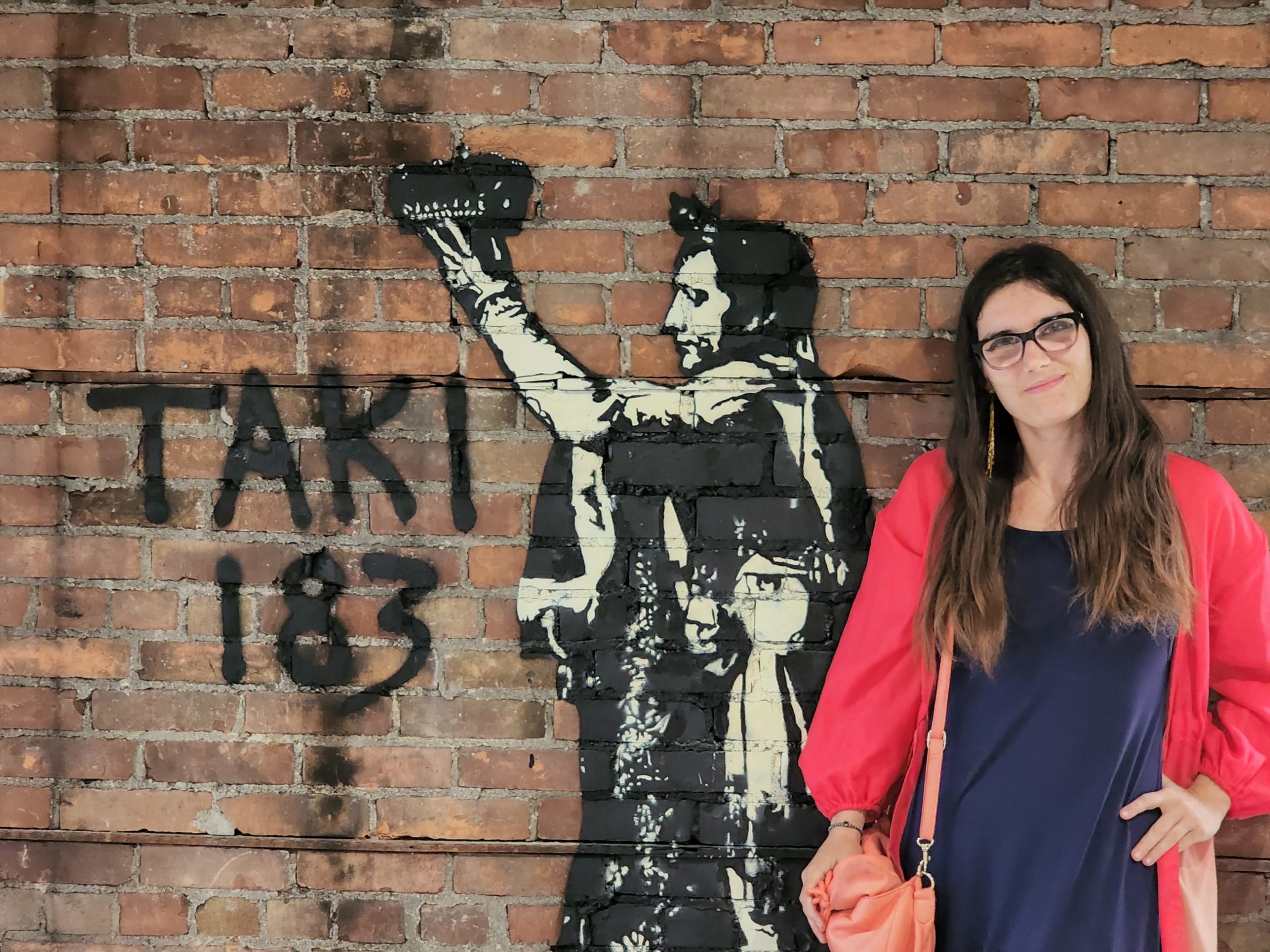 “I think about one hundred or two hundred years from now, looking back at the archives, what people will think of this meeting.”

In reporting on visual art over the past two years, I’ve come to believe we’re witnessing a shift in the culture of art. The average person in contemporary America is lonely and broke. What draws people in now isn’t prestige, but community and accessibility. That isn’t mutually exclusive with prestige and glamor, but glamor no longer belongs to the ruling class, because the 99% has had to make their own. Graffiti is one of the few things in our commodity-obsessed world that doesn’t have a price tag. It’s both free and priceless, something that can’t be bought or sold but nonetheless overflows with value. There’s no telling how history books will remember these moments, but I was proud to have been there as just a kid from the Heights trying to find my place in the world, just like Taki once was.