Tamara Annis takes the idea of being multifaceted to a whole new level. Annis and her high-school sweetheart got married in Vegas by an Elvis impersonator. She holds a minor in Aboriginal Law from St. Thomas University in New Brunswick, a coastal Canadian province alongside her education in fashion at Richard Robinson Academie Des Hautes Coutures. She manages Willem Wolfe, an electronic musician whose father is acclaimed ‘80s rocker Billy Idol. But creativity is what holds all of Annis’s interests together. “As soon as I could hold a pencil, I was into being creative and entering contests,” she said. 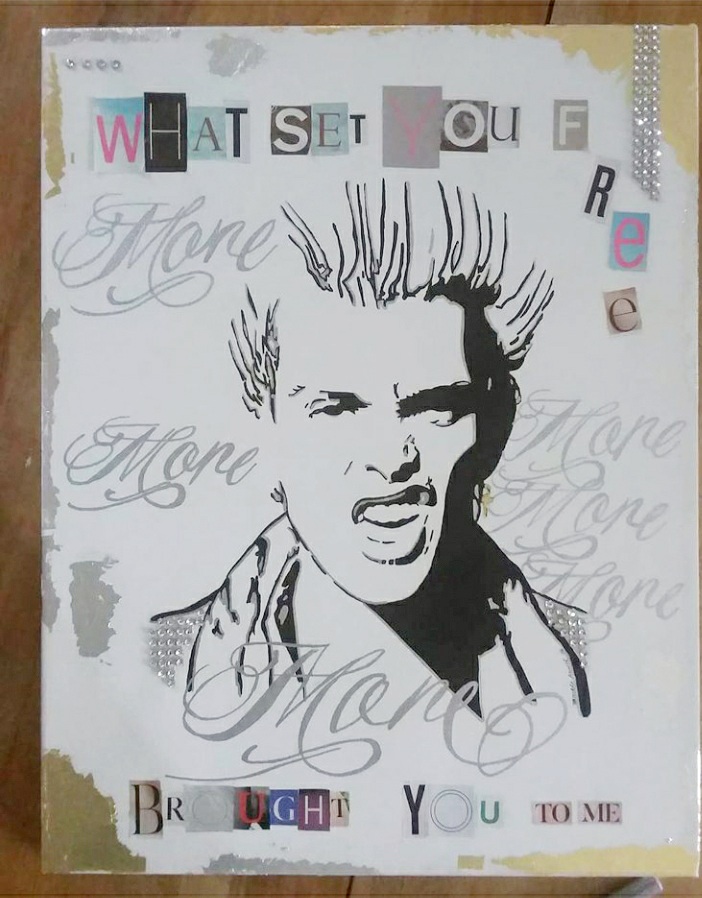 On top of all that, Annis was close friends with Rick “Zombie Boy” Genest, the tattoo-covered artist and model featured in Lady Gaga’s “Born This Way” music video in 2011. It was Genest’s tragic death that brought Annis to her interest in street art. While scrolling on Instagram, she discovered Life After Death. “I really connected with their account, since there were all of these unresolved circumstances around the death of my friend,” she said. “To me, street art was spraypainting, but this was stencils, so it was something new. I started following him and seeing what all these people were doing.” She and Life After Death began a correspondence, and she soon got her hands on some of his stickers.

Though Annis and her family live in Metcalfe, Ontario, it was in Los Angeles that Annis became more enamored with street art. During the course of her friendship with Life After Death, she put together that the street artist she’d come to know was the alter ego of Dave Navarro of Jane’s Addiction and the Red Hot Chili Peppers. “There was a photo posted of him where you could see his hands, and I was like, I know those hands. It can’t be Dave Navarro. But then once I got the stickers in the mail, the return address said Dave Navarro!”

There was a photo posted of him where you could see his hands, and I was like, I know those hands. It can’t be Dave Navarro. But then once I got the stickers in the mail, the return address said Dave Navarro!”

She also realized that she and Navarro had another thing in common—advocacy for survivors of domestic violence. Annis, who is a survivor herself, connected with Navarro over the trauma of his mother’s murder by a violent partner. Though she describes their early friendship as “oversharing,” for Annis, Navarro was an entry point into an expressive, meaningful new art community. Before she even knew the person behind it, Life After Death’s message of creating beauty out of trauma resonated with Annis. “I love art with a meaning,” she said. “I started listening to Paint the Town and really getting to know the faces and names and everyone in the scene. And, of course, the drama.” Being a part of a community was a way for Annis to heal from and process the death of her friend. 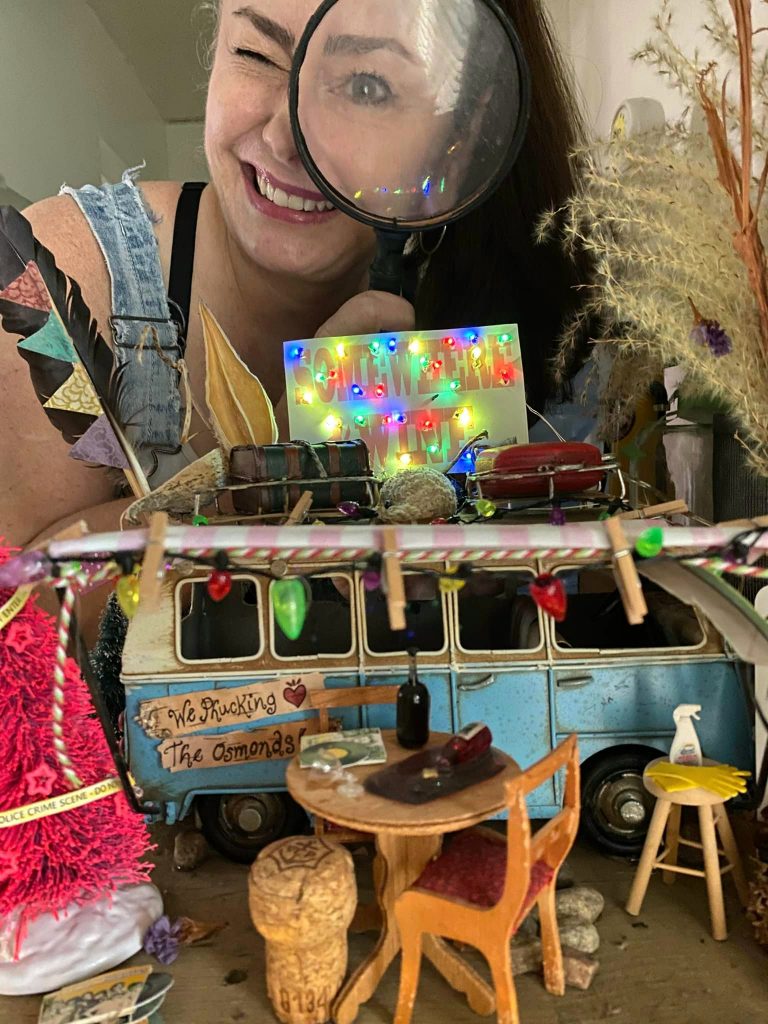 All the while, she was honing her own artistic craft and continuing her advocacy. Annis is vice president of BurningBliss Project Phoenix, a nonprofit organization which paints the houses of domestic violence survivors in Canada. What separates domestic violence from other forms of PTSD is its presence in the domestic sphere—it’s abuse that takes place within the four walls of someone’s most intimate space. Through Burning Bliss, Annis changes the physical space of survivors’ homes to help them reclaim them.

“One of the things I paint is fairies and mason jars. It’s a metaphor for people with PTSD. It’s like, these jars containing your light, you can’t believe that these beautiful beings are trapped within that.”

“One of the things I paint is fairies and mason jars,” she described. “It’s a metaphor for people with PTSD. It’s like, these jars containing your light, you can’t believe that these beautiful beings are trapped within that.” Her husband, Michael Bennett, an artist in his own right, also deals with PTSD from his service as a first responder. Annis’s mason jar series, titled Phaeries, Tails and The Synchronicity of Dysfunktion depicts fairies not as sparkling waifs but as artists in bell-bottomed jeans with hoop earrings, with unique details and styles that show the vibrancy that trauma traps inside the proverbial mason jar. Bonnie Phae wears fishnets and ballet flats, Bey Phae holds a can of spraypaint while standing tall in red pumps, and Artsy Fae’s clothing is covered in peace signs. Each of these figures show a woman retaining her individuality while trapped in the insular world of trauma. They’re the self that can’t get expressed outside of the mason jar of the mind. She explains it as “a world only understood when you are living there.” 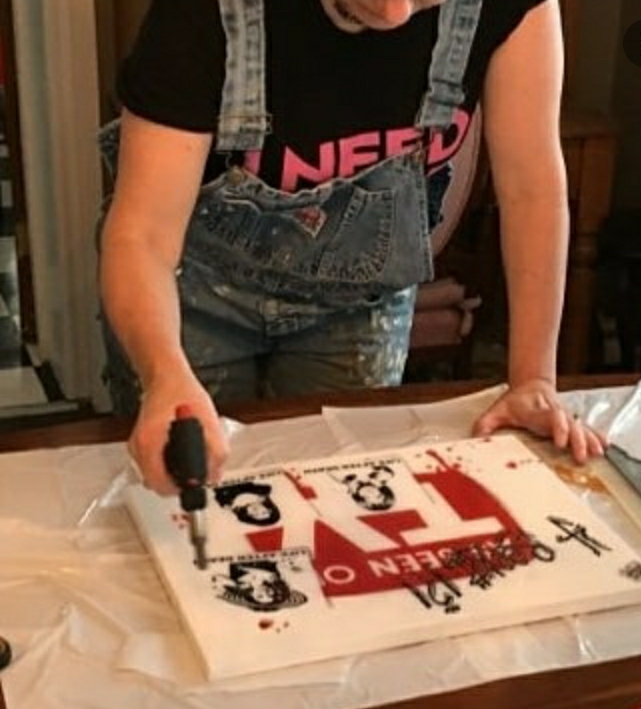 Annis’s art and beauty company she sells the fae prints out of, Oscar’s Emporium, is named after her son, showing that regardless of what from the past expresses itself in her art, she chooses to focus on the future. The concept of healing and emerging stronger from the past was what drew her to Dave Navarro’s Life After Death alter ego. The butterfly, which shows up in Life After Death’s work, has particular meaning for Annis due to it being a symbol of hope after domestic violence. The fairy art that she makes is representative of that metamorphosis, but also of viewing the world through a curious, positive lens even after difficult experiences. Her interest in the miniature and “fairy doors” show a whimsical, open-minded attitude towards what our world might hold that’s too small for us to see.

From being enough of a music aficionado to recognize Dave Navarro only by his hands to producing an episode of Paint the Town, Annis has been able to participate in many different creative endeavors. “I just love pop culture. I’m a pop culture junkie,” she said. Part of how Annis has connected with so many people across so many different artistic mediums and walks of life is that she makes a point to look beyond what meets the eye, whether that’s with Dave Navarro or Zombie Boy. And while street art and graffiti have a large social media presence, Annis’s interest in it isn’t for clout or out of a desire to capitalize off of it. “With street art, I’m saving all these things I collect for my son, Oscar, so when he’s an adult, he’ll have this whole collection of street art,” she said. Annis’s passion for street art isn’t just a super-fan fixation. What sets her apart from other street art fans is her active membership within the community and interest in the person behind the mural.

Also check out the other articles in this mini series on Michael Bennett, her husband & Willem Wolfe, an artist she manages.

Emma Riva is the managing editor of UP. She is the author of Night Shift in Tamaqua, an illustrated novel that follows a love story between 24-hour-diner waitress and a Postmates driver. As an art writer, she is particularly interested in working with international artists and exploring how visual art can both transcend cultural boundaries and highlight the complexities of individual identity. is a graduate of The New School and a Wilbur and Niso Smith Author of Tomorrow. She lives in Pittsburgh, Pennsylvania.

T.K. Mills the Editor-in-Chief of UP and an art journalist based in New York City. After receiving a Master’s Degree in Global Affairs, he discovered a love for graffiti while backpacking through Cuba. T.K. has written for several art publications including SOLD, Global Street Art, and Arte Fuse. Additionally, he manages the street art blog, Well Pleased We Dream. Beyond art, T.K. loves reading and traveling.