To queers and creatives, Berlin has become one of those sanctuary cities where we consider ourselves safe to be and express who we are in all our complex and beautiful forms. If reinvention were an art form, this city would be a masterpiece. From the rubble of the WW2 bombings, Berlin birthed its highest hills and rebuilt itself like a phoenix rising from the ashes. As I walk through the bleak streets of the former DDR – concrete slabs dampened by a grayness that lingers over the city – there’s a skip in my step when I see the walls, stairs, and benches tagged with the word, “clit.” The wall that once divided the city between east and west was and still is the people’s canvas, recording their dissent. Berlin is gritty, chaotically diverse, and home to Europe’s most significant space that has allowed free artistic expression to flourish for decades – the Devil’s Mountain, Teufelsberg.

Each crevice of the city leading up to the looming edge of the Grunewald Forest is an open invitation for folks and artists of all creeds to leave behind a caption with a paintbrush, spray can, or just a simple marker. Teufelsberg itself, perched at the tip of the forest, inhabits the niche between an outdoor art gallery and the gusty ruins of a cold-war colosseum. The varying colors and artistic styles that adorn its creaking walls blatantly show the multitude of voices represented. I am both tempted and appalled at my desire to somehow leave my own mark.

Today, Teufelsberg stands as the second highest point in Berlin, the result of 400,000 destroyed buildings dumped on top of what would have been, if Hitler had his way, a Nazi technical university. In 1937 the city announced an unprecedented architectural competition for the university center’s capital planning, including tennis courts, museums, and parks. Although this, as well as all other non-war construction projects, was abandoned in 1940. 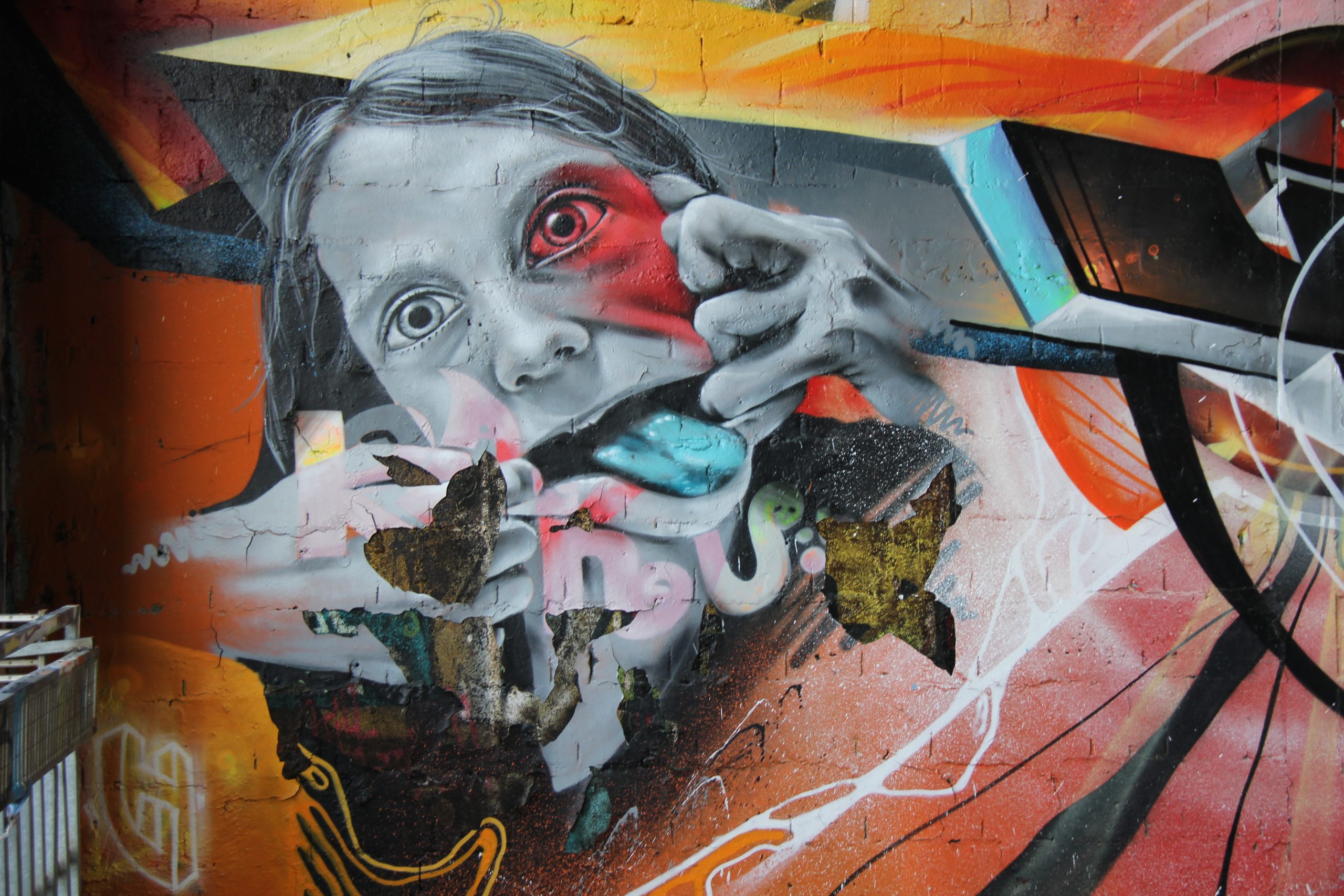 This heaving mound of 26 million cubic meters of debris has “almost” been many things, including a winter sports resort donning ski jumps and rail lifts, and took almost 20 years to compile. In 1969 the United States government took over the mountain, and we have the NSA to thank for the undeniable phallic resemblance of the listening tower and massive golf ball structures they built. The bizarre design became one of the NSA’s largest listening stations, each of the five balls containing giant parabolic antennae. The resulting 360° view of Berlin is as excellent as I imagine the signal reception to have been for the Cold War security agents and spies, listening in on enemies, perceived or proven.

“The Big Ear” was shut down shortly after the reunification of Berlin and the wall’s fall in 1989. Teufelsberg was tossed back and forth between investors hoping and failing to build luxury hotels and apartments throughout the nineties and early-2000’s. Finally, the time of the proletariat arrives as the masses claim the abandoned buildings, and artists splash and spray the walls with color and point of view. In 2012 Graffiti Lobby Berlin, an independent artist collective, reimagined the space, building additional walls to show more artwork with the theme of “Resurrection from Ruins.” Teufelsberg has since been a creative mecca, valuing free speech and allowing artists from all corners of the world to combine a kaleidoscope of attitudes, styles, and perspectives. 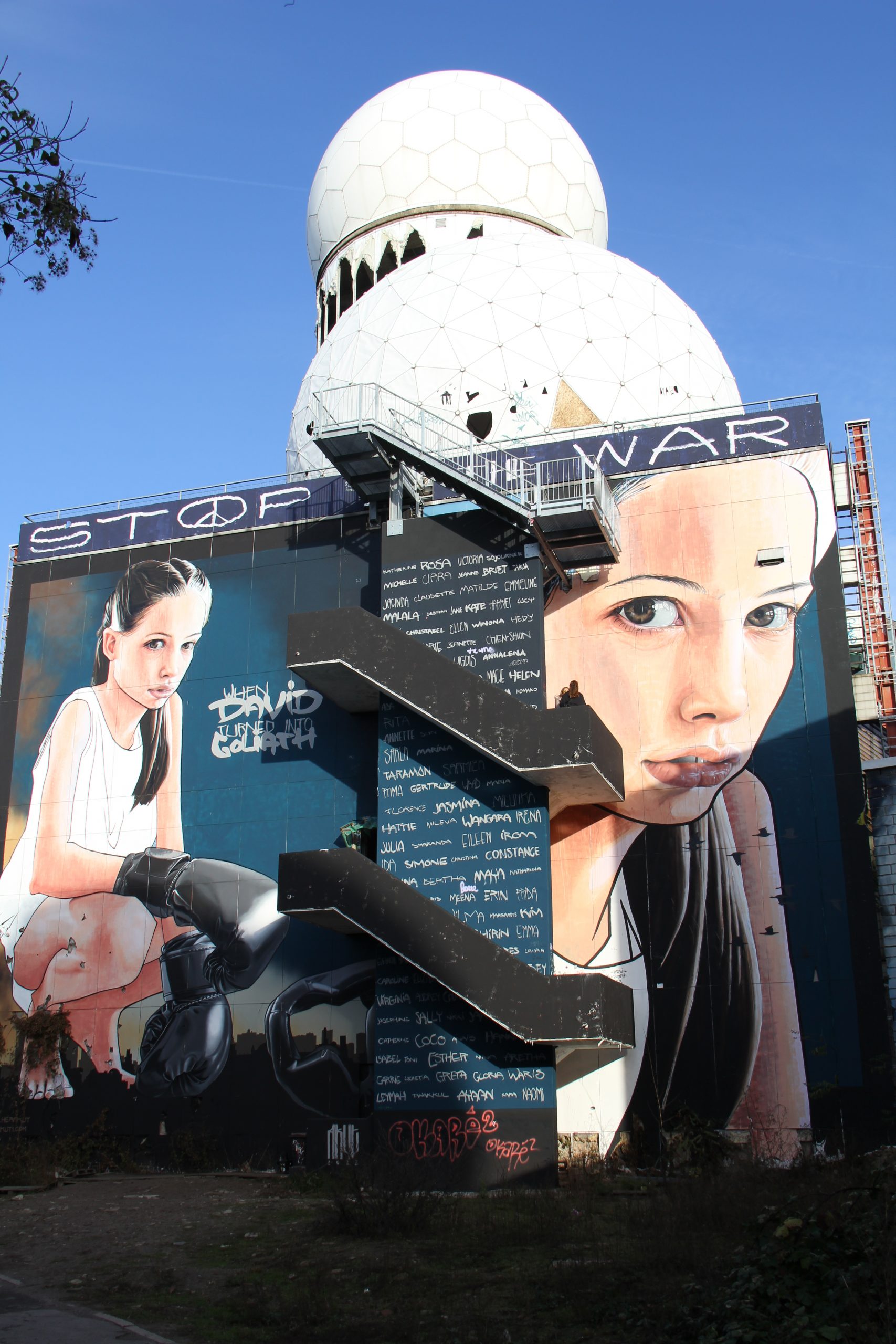 In 2012 Graffiti Lobby Berlin, an independent artist collective, reimagined the space, building additional walls to show more artwork with the theme of “Resurrection from Ruins.”

As I make the hajj up the precipitous, winding road to the top of Devil’s Mountain, named for the neighboring Teufelsee lake, [Teuful is German for ‘Devil,’] I revel in the fact that it has been given back to the people of Berlin as a means to experience and create art. The journey is steep; beneath my feet is the accumulation of splinters from violent war but the art is significant, bold, riveting, comical, painful, and covers everything. As I walk past, the various warehouses tower over my head; the ground is dappled with wrought iron sculptures, boulders painted as cityscapes, and an abandoned tractor – now prismatic. Visitors mill about the maze of ruins, and I join them, pushing my camera forward as we explore cavernous rooms and hallways together. Color is thrust into every fracture, and each crack is smothered with calls to action. I agree with most of the sentiments blasted onto the ragged bricks; there’s a tone of frustration in each brush stroke and can squirt. 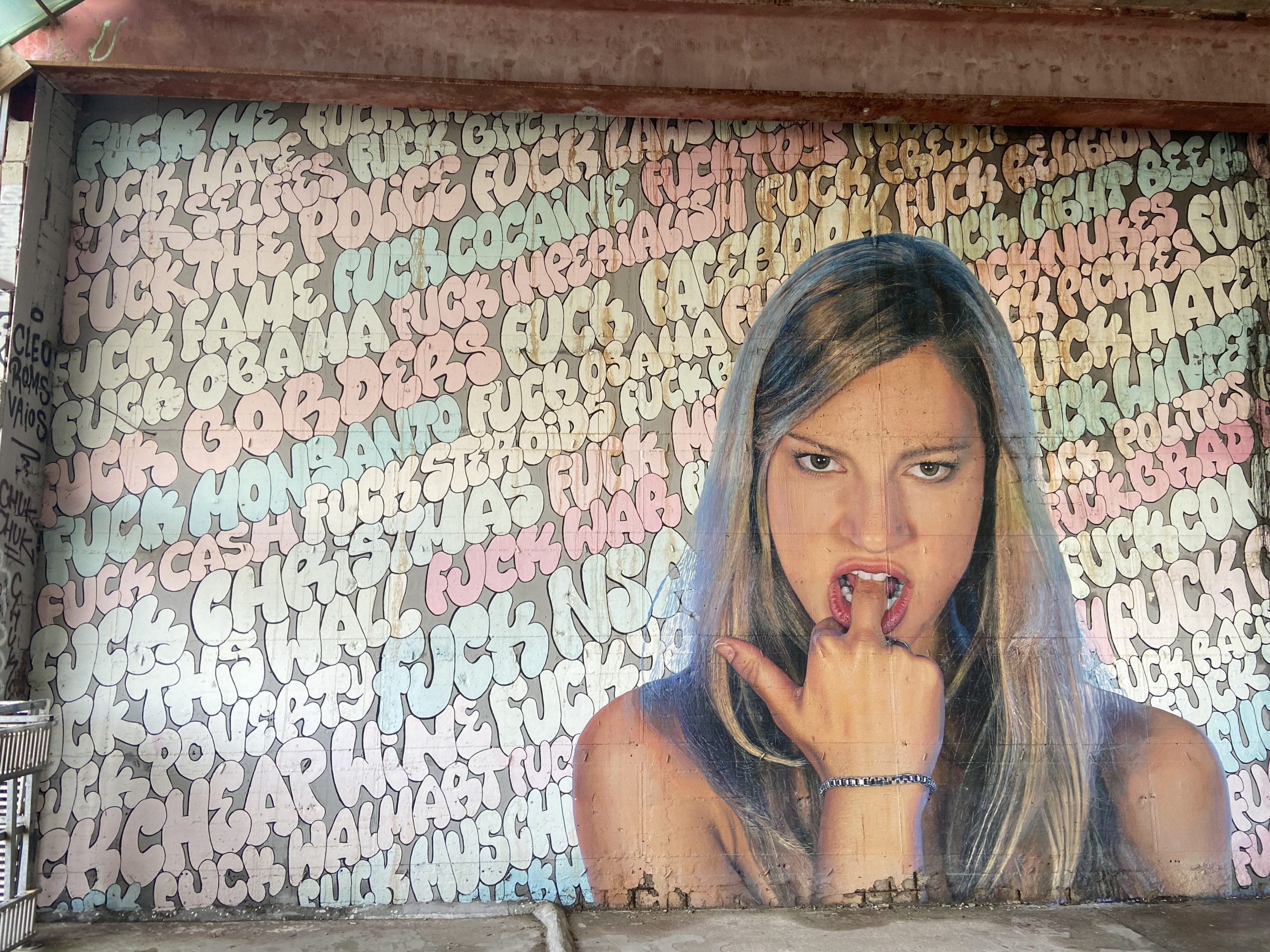 As I make the hajj up the precipitous, winding road to the top of Devil’s Mountain, named for the neighboring Teufelsee lake, [Teuful is German for ‘Devil,’] I revel in the fact that it has been given back to the people of Berlin as a means to experience and create art.

“Fuck Your Borders” screams a massive mural featuring a child sling-shotting a human heart over a barbed wire fence. Another shows a young woman biting her middle finger; the backdrop is a flurry of varying baby blue and pink expressions of “Fuck” this, that, or the other. Standing in front of a piece by Nick Flatt and Paul Punk, I can hear other onlookers chuckle at the sentiments. “Fuck the NSA,” “Fuck Oil,” “Fuck Imperialism,” “Fuck Light Beer,” and “Fuck Brad Pitt,” to name just a few. The range of styles and subject matter cover every corner of society’s consciousness from the last decade; there is tangible vigor behind it all. 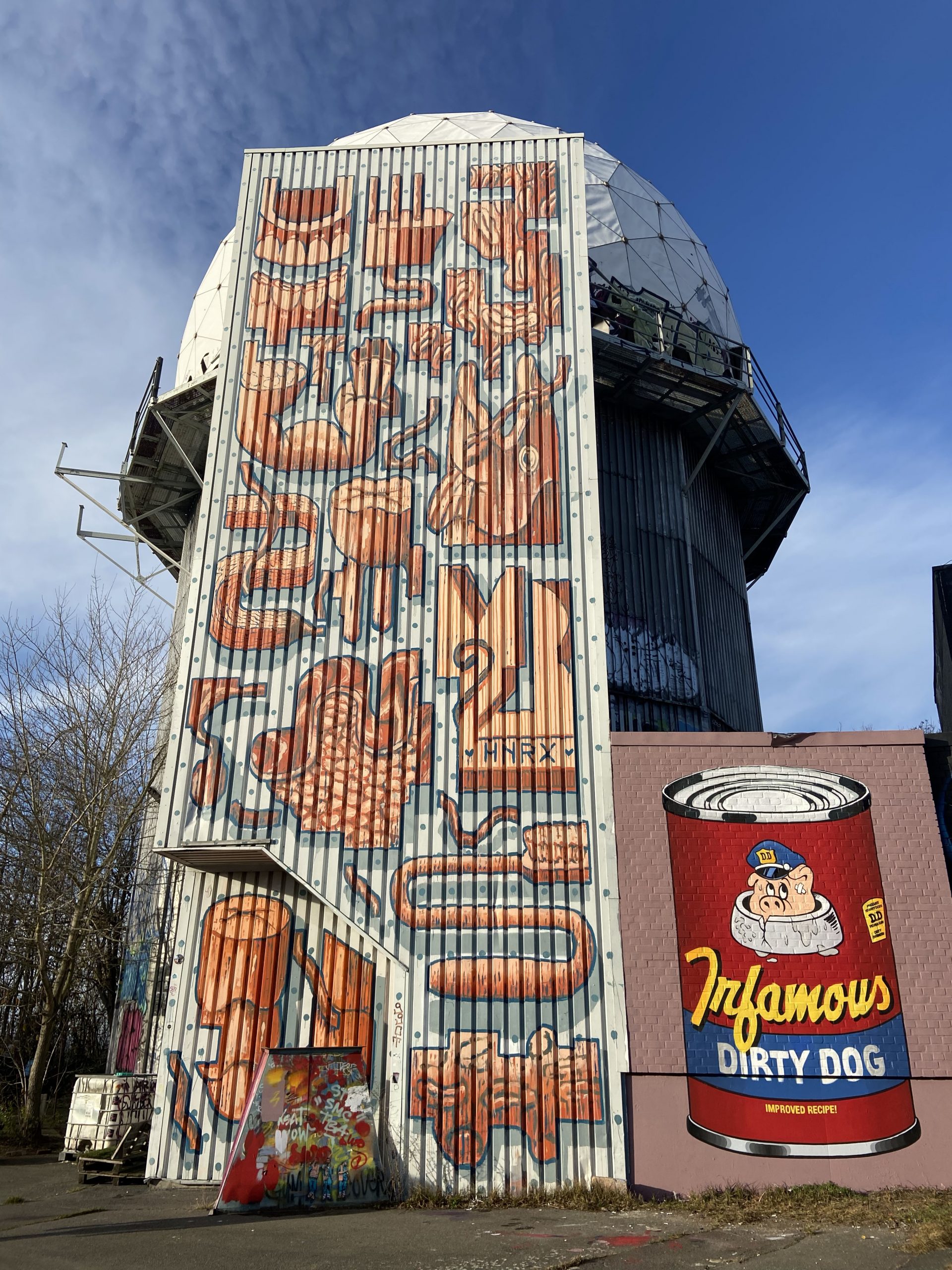 The main structure at Teufelsberg is a sizable tubular building, topped and straddled by its aforementioned balls, with outdoor stairs stapled onto the sides that look and feel precarious. Frigid air blasts from all directions, and each floor becomes a wind tunnel as I ascend, stopping on each level to take in the cornucopia of rich, luscious color. I can see that nature and her elements are ever-present collaborators in the chambers of Teufelsberg. Having weathered away the top layers of paint, she unveils old pieces that lie beneath. The drippings and shadows of the art that came before are portholes to the past; I can see the layers of paint and plaster build upon each other. The larger murals are displayed for at least a year, but walls are regularly cleared to include new art in the tenet of diversity and collaboration.

This encapsulates the spirit of Teufelsberg and Teufelsberg, the heart of Berlin. The city, resurrected from the ruins of war, twisted into its various forms, is now a place for all voices to be heard, valued, and elevated.

Andi Schmitz is a writer, artist and recent American expat. Born in Dublin, Ireland and raised in a smörgåsbord of places, she has recently relocated to Berlin, Germany. Lifelong writer and artist, she is recovering from former corporate fintech life by self-induced art immersion. Her hobbies include painting, a good whiskey sour, and exploring art as a form of social outcry.