If at some point in the last twenty years you walked through the streets of Leeds or Brighton, or gone by Waterloo Station or Kings Cross, or passed under the overpasses in Sydney, or strolled down sidewalks in Shanghai, then you may have come across some curiously subtle artwork stenciled into the concrete.  If you then walked by one of those same spots a month or two later, you may have noticed that it had disappeared without a trace.  This is the transient, intriguing beauty of reverse graffiti, the process of using stencils, pressure washers, rags, and even toothbrushes, to clean images and messages into sidewalks and walls that have accumulated years of a city’s coughed exhaustion.

The artist whose work was teased out of the concrete in the places listed above is Paul “Moose” Curtis.  Moose is widely considered to be the Godfather of reverse graffiti.  He invented the form and started clean-tagging the sidewalks and walls of Leeds, England back in the late nineties to promote an album for the record label he was managing at the time.  His work eventually drew the attention of Leeds City Council, which tried to bring legal action against him.  The legal dispute actually gave his work more publicity and encouraged more people to get in on the form. “I felt like I created this really curious process that flipped the laws and made it really awkward for the legal system to deal with…it was just in a beautiful gray area,” he told me in a recent interview. “They [Leeds City Council] said all kinds of [negative]things about me to the press, which actually was piping me in a way that no PR people could do.” What resulted was a publicity that he had not expected and…wash, wash, scrub, scrub…a new artform emerged. 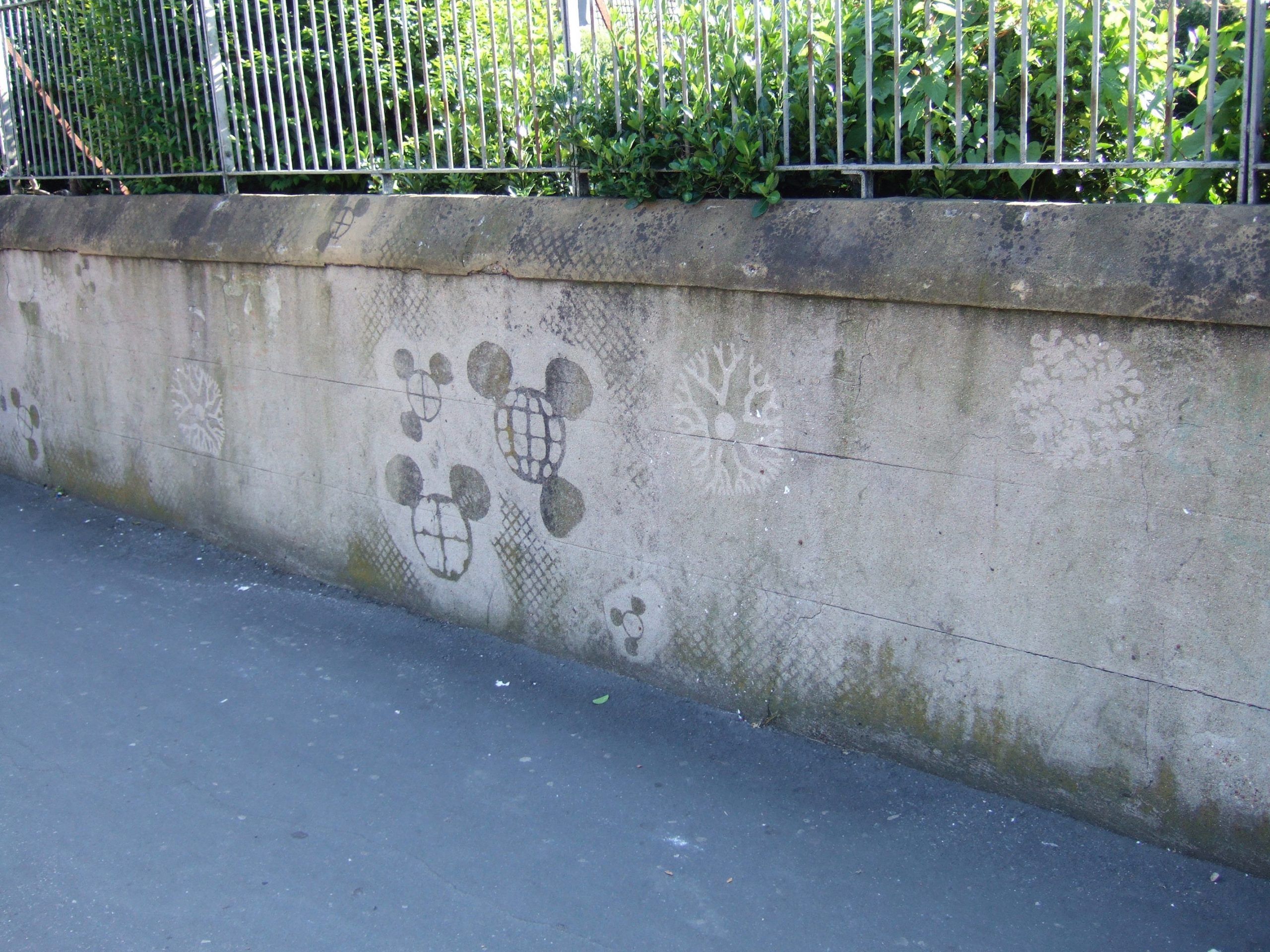 “I felt like I created this really curious process that flipped the laws and made it really awkward for the legal system to deal with…it was just in a beautiful gray area,” he told me in a recent interview.

In subsequent years, many artists have added their own style and flare to the reverse graffiti genre.  Brazilian artist Alexandre Orion’s sculls scrubbed into an underpass in Sao Paulo; Oliver Bienkowski’s series of clovers stenciled into a highway wall that became Germany’s longest stretch of clean tagging; Scott Wade’s dirty car art (which takes the ‘clean me’ scrawled across filthy car windows to stunning levels of detail and beauty)—they all owe a bit of a tip-of-the-cap to Moose.

Companies also caught on to the value of reverse graffiti in promoting their brands, and the term ‘clean advertisement’ was born.  Smirnoff, Puma, ING Bank, Mini Cooper, Nissan, and countless others have jumped at the opportunity to subtly promote their brands in the stenciled or brushed photographic negatives of their logo or slogan peaking from a carefully-cleaned sidewalk or the window of a dirty car.

In fact, it’s the very much not-in-your-face nature of the medium that can make it so appealing for marketers.  “When you’re in a city, advertising at eye-level is psychedelic almost—it’s so intense”, Moose told me. “The stuff that works really well isn’t really in your face, it’s a little bit more intriguing…you can draw people into something and make them be involved…and solving it, if you like, being a part of that riddle that you make.” 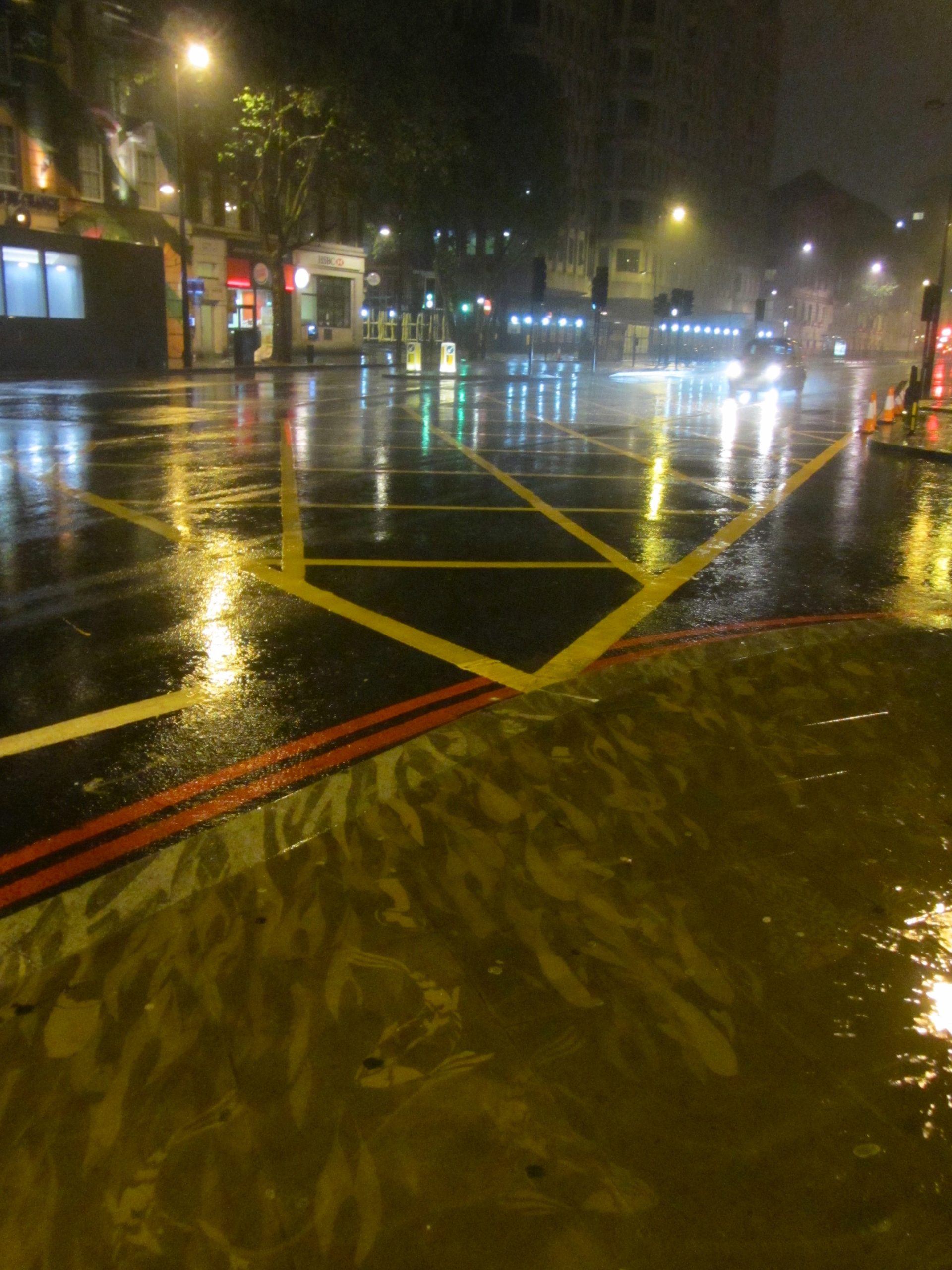 “The stuff that works really well isn’t really in your face, it’s a little bit more intriguing…you can draw people into something and make them be involved…and solving it, if you like, being a part of that riddle that you make.”

It’s at this point where reverse graffiti and experiential marketing sort of coalesce and can lead to unique and provocative collaborations between artists and brands. Experiential marketing, quite obviously, creates experiences between brands and consumers.  Interactions called ‘activations’ in marketing jargon include product sampling, games, and different kinds of physical/sensory interactions that give the consumer a memorable and thought-provoking experience with a product or company.

Reverse graffiti is very much experiential.  It forces people to confront the dirtiness of their urban space and serves as an eye-opening commentary on carbon emissions and pollution in general.  A collaboration between Moose and Keep Britain Tidy, for example, involved a nature scene clean-tagged into a wall near King’s Cross Station, where he then recorded how much litter was being dropped and incorporated it into the scene.  “I created this really beautiful kind of natural environment, and then destroyed it day-by-day…turning something quite nice into something quite disturbing.”  For Moose, the experience of transience and his art’s interaction with people on the street is the ultimate power of the form, where people walking to work or wherever everyday can experience a piece evolving and stop for at least a split-second to think a bit more critically about something.

Companies would be wise to incorporate tactics like this into their marketing strategies.  Though Moose warned in not-uncertain terms of the dangers and pitfalls of working with big companies, citing numerous examples of collaborations where he felt constrained or deceived.  A plant-based cleaning product called Greenworks he collaborated with, for example, turned out to be owned by Clorox, a company quite antithetical to anything considered ‘Green’.

But more than that, Moose highlighted an inherent dilemma in the collaborations between reverse graffiti artists and companies, saying that he always “felt quite uncomfortable about the fact that it was the art form lending itself to show people how dirty the world is…and yet if it’s involved in a corporate way where it’s encouraging consumerism, it’s totally paradoxical.”

The consumerism inherent in advertising, particularly in our present moment where algorithms are becoming increasingly predictive of our tastes and preferences, is something to be wary of to say the least.  Though if both the artist and brand are on the same page, fruitful collaborations are there for the making. 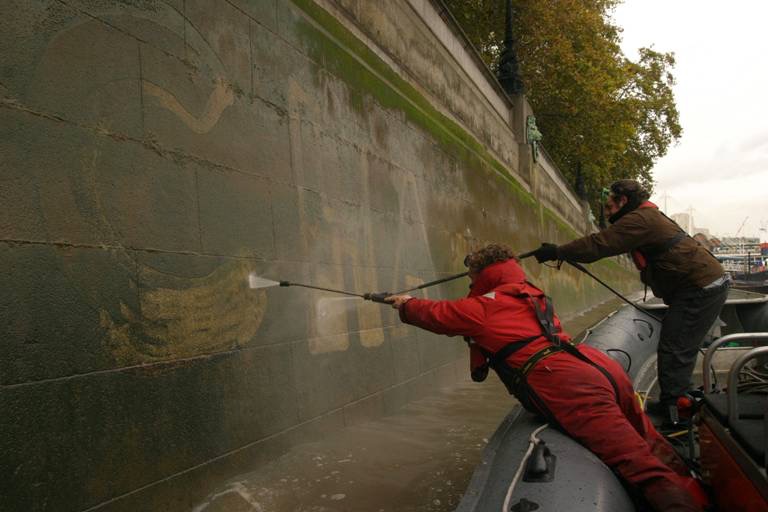 He always “felt quite uncomfortable about the fact that it was the art form lending itself to show people how dirty the world is…and yet if it’s involved in a corporate way where it’s encouraging consumerism, it’s totally paradoxical.”

For now at least, Moose is content spending his time on his farm in Spain, growing agave and getting in touch with the natural world he’s been committed to cleaning for decades.

Andrew Bell is a freelance writer from Massachusetts and is currently based in London. While living in Istanbul for five years, he became immersed in the graffiti and art culture of one of the oldest cities on earth. He loves getting lost in unknown cities, loves music, and tries his best to differentiate between honesty and bullshit.