The Collaboration: A Play On Warhol & Basquiat

The Collaboration is a play that explores Andy Warhol and Jean Michel Basquiat’ s joint work. That, considering the title, is quite self-explanatory. What is not as obvious, is what follows once you sit down. When I had the opportunity to see the show at the Young Victoria Theater I had the hybrid experience of watching a play that was  acted as if it was the last performance on earth.

Writer Anthony McCarten thought up bringing back the world of ‘80s New York where two major artists’ egos clashed so brutally that it made modern art history. McCarten is best known for writing biopics like The Theory of Everything (2014), Darkest Hour (2017), Bohemian Rhapsody (2018) and The Two Popes (2019). His subject matter of choice seems to be men who changed the world, who were incredibly accomplished in their field but in equal measure as obsessed with themselves.

Like Warhol himself, we, the audience, are shot with McCarten’s interpretation of the collaboration between these two acclaimed artists, and we carry it as a wound all along the two and a half hours of this altered reality. Like Warhol, the incident does not kill us, but we shall not be the same afterwards.

First, we are welcomed by the amazing DJ Xana, who sets the mob for our time traveling to the 80s in New York, where counter-culture ruled the moment through music, art and film. Scenic designer Anna Fleischle crafts convincing loft-apartments and things really come to life with Ducan Mclean’s projections. It’s captivating entertainment served on a platter.

The play revolves around Warhol and Basquiat, and two supporting actors, who played Bruno Bischofberger, the art dealer that got them to collaborate in the first place, and Maya, Basquiat’s partner. An ambitious bet, to rely so much of the play on such a small crew. But Mclean’s got himself a good hand, good enough to call a full house without bluffing.

Paul Bettany’s metamorphosis into Warhol is a performance worth watching all on its own. His obvious physical similarity masters Warhol’s languid body language. Fictional Warhol’s insistence with the shot incident with his former friend Valerie Solanas alerts us that the subject of life and death will be strongly present. 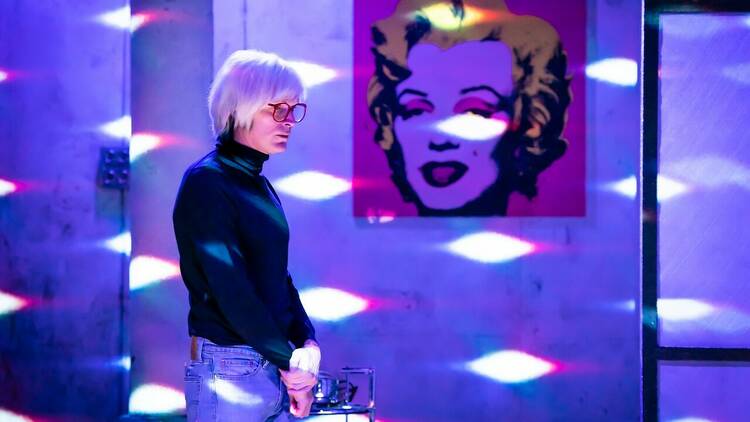 Jeremy Pope personifies Basquiat’s energy  in a mesmerizing way. While what is marked as a before and after in Andy’s journey is a first-hand close-to-death experience that we do not see in the play, McCarten’s Basquiat experiments on stage with the loss of one friend in the hands of the NYPD while doing graffiti, tying contemporary race issues into the narrative. Basquiat was one of the first first African-American painters to achieve worldwide recognition and it is of public knowledge that he was a target for racism; most museums only showed his work after he died. The Collaboration brings to the scene his genesis as an artist, right in New York’s backyard, spraying the streets signing as SAMO. 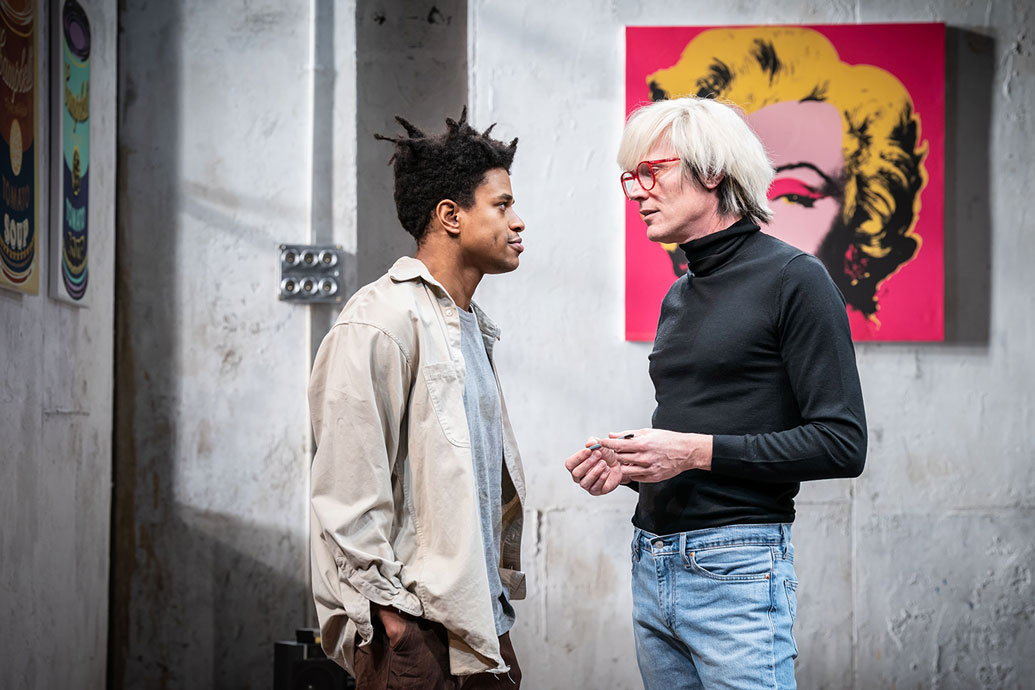 Basquiat was one of the first first African-American painters to achieve worldwide recognition and it is of public knowledge that he was a target for racism; most museums only showed his work after he died.

Warhol and Basquiat’s art dealer, Bruno Bischofberger, played by Alec Newman, was portrayed as a key element for the actual collaboration. The manner in which he so carefully manipulates the artists’ ego, like working on a Swiss watch, or a bomb, is simply marvellous. Bischofberger is represented respectfully without falling into the American stereotype for snobby Europeans.

The play does not necessarily do the same justice to the character of Maya, played by Sofia Barclay. Not to fall into the easy assumption that men only write men characters, and women characters as perceived by them, but given how deeply the play dives into the mind of Basquiat and Warhol, I find it difficult to think of another reason for this lack of depth in such an important character. 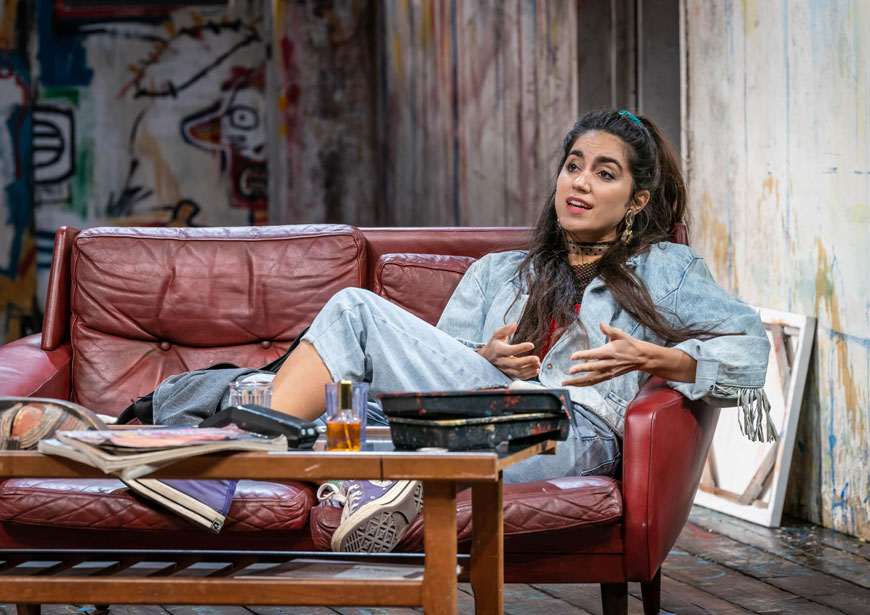 Not to fall into the easy assumption that men only write men characters, and women characters as perceived by them, but given how deeply the play dives into the mind of Basquiat and Warhol, I find it difficult to think of another reason for this lack of depth in such an important character.

As a juxtaposition of opposite forces in art history, the play works well. It highlights some easy-to-spot differences, such as race and generation; both protagonists experience each other from a distance at points when all of these features interact. Warhol appears as a decaying figure in the art world who has not painted in 20 years; while Basquiat is experiencing the highest point in his career. The immigration component is something that they share as an experience, but the misunderstanding of the difference in opportunities and privileges conditioned by race is well portrayed in the dialectic between them. It feels like McCarten and Kwame Kwei-Armah were trying to give Basquiat the justice he did not experience while living. Addictions and depression are represented as constant ghosts haunting both men in different forms. 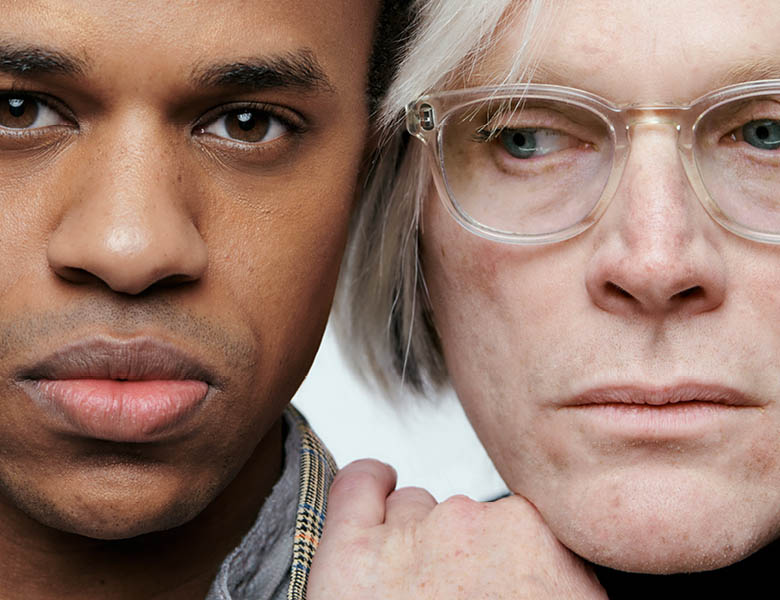 Addictions and depression are represented as constant ghosts haunting both men in different forms.

One of my favorite aspects of Warhol’s character is his obsession with filming and documenting his experience, overlapping sometimes with his obsession with Basquiat. is Warhol’s skill as a cinematographer is a characteristic that has been left out of his biopic most of the time. The touch of holding the camera in some scenes like a  gun reminded me of J.R.’s photography in the cartiers of Paris. Storytelling has the power to kill you, only to be reborn with a new perspective, and the way McCarten plays with this got my expectations on the play fulfilled. And it makes me wonder, are obsessions an essential part of existence?

At some point, almost at the end of the second act, the exchange of conceptual insights on art and what it should do for the painter and for its audience gets heated and explodes leaving two naked men trying to be honest with each other in their own misery.

Basquiat and Warhol’s friendship develops rapidly from the first act to the second, and we are left with a fragment of their lives that was witty, honest, exploratory and deep. I do understand that this is a crop of a part of their lives, focusing on their collaboration and what that interaction brought to the table; and even though you can assess that there is a tremendous amount of research behind the script, many things were left behind. I read that there will be a film and this will allow exploring some details even more. Of course, following my obsession, I will be watching that film as soon as it gets released but if you ask me now, I prefer to be left with this shade of them.

The Collaboration will be coming to Broadway in New York in Winter 2022, allowing American audiences to see firsthand what London stages got to experience.

Candelaria Barandiarán was born and raised in Buenos Aires, Argentina. Her passion for learning different cultures has led her to live in Hawaii, California, France and now the UK, where she resides in London. Candelaria has written articles and short stories for several publications such as Tundra, Argentina Cultural Exchange, WorldPackers, Chicas in New York, and currently writes a column for The Londoner blog “People Who Do Things”. When she is not traveling or meeting new people, you can find her in a vintage bookshop.