From Banksy to Mr. Brainwash, contemporary street artists have dominated headlines with their auction prices. According to reports by websites such as ArtPrice, street art is one of the most “dynamic sub-sections of the contemporary art market.” Intrigued, I decided to research just how expensive these works were, but chose to limit my scope to living artists. After selecting some of the most successful street artists alive today, I consulted the website Widewalls to explore their auction history. The results, while ranging in price from about $37,000 to $200 million, reveal a desire amongst collectors to purchase some of the most cutting-edge and experimental works of our time.

Knickers (2006): With a delicate balance of femininity and irony, Knickers is a veritable display of Nick Walker’s tongue-in-cheek South England charm. The woman’s seductive gesture manages to allure while maintaining a respectful distance, leaving room for the viewer to imagine what isn’t included in the pictorial plane. The counterpart to a stencil of the same name, it was made with spray paint on board, and uses contrasting yellow, blue, and pink hues to refer back to its pop art roots. In 2008, it sold at a DreWeatts & Bloomsbury auction for $37,600, a hammer price more than double its low estimate.

Untitled (2011): Retna’s Untitled is a monochromatic rendering of his signature typography, which emerged from the Los Angeles graffiti scene. The fine details in these cultural hieroglyphs reflect his methodical approach to brush work, using sharp lines and complex layering to build two-dimensional canvases. His work usually contains personal messages, which allude back to the reason he started making street art in the first place – he wanted to transform the medium into something that would not be easily recognizable to a viewer. Untitled was painted with acrylic, standing to demonstrate Retna’s multimedia oeuvre, and came in at about $38,000 in a 2014 Phillips, De Pury & Luxembourg auction.

War Is Over (2007): The color scheme in this spray-painted work by Shepard Fairey sold for $71,700 in Paris may seem familiar to anyone who has seen a Barack Obama campaign poster. Before he made his big break, Fairey was known for cranking out similarly politicized pieces that were often centered on pacifism. War Is Over features a zeppelin that bears its name, flying over an otherwise dismal industrial complex. As a means of commentary on the dark and violent underbelly of society, the poignancy rings true to a contemporary audience.

Charlie Chaplin (2010): This soft, baby pink depiction of one of Hollywood’s most prominent silent era stars sold for an even $100,000 at a 2010 New York auction. Charlie Chaplin is both Mr. Brainwash’s most well-known and widely disseminated work. Though allusions to Basquiat, Warhol, and other forefathers of the modern street art movement abound in this mixed media on canvas, its true meaning is no more known today than it was when it made a splash on the art world eight years ago. Some would say the humor is in the mystery.

Untitled (2011): Untitled is a surrealist painting by twin street artists OsGemeos that pays homage to the diversity of their native Brazil. The dynamic piece, which integrates a variety of seemingly arbitrary symbols like a blowfish or, light house in harmony, contains yellow-toned caricatures that are ubiquitous throughout the duo’s work, standing in contrast to the rosy pink background. The psychedelic color scheme is a fun addition to this flawlessly executed, fictionalized universe, where even the sun and the moon are personified. It was scooped up at a 2014 auction for about $220,000.

Alias HK 59 (2014): Invader’s work often exists in the interplay between art and nostalgia, and Alias HK 59 is no different. The pristinely pixelated aliens seem straight out of Space Invaders themselves, and in this piece, red and white ceramic tiles collaborate to form smaller, moving parts of a unified whole. Christie’s sold it for $283,000 in 2015, making it Invader’s highest sale to date, and the best representation of his recurring motifs. The mosaic, composed of two parts, was meant to be a full-size replica of a larger work he had made in Hong Kong.

Keep Moving (2012): KAWS’ gruesome painting turns Disney to gore, a bewildering and collocating quality that is unquestionably responsible for how well it did at a 2018 Phillips London Auction. This mutilated portrayal of the beloved Mickey Mouse is now worth over $1 million, with the artist’s signature X marking the spot on Mickey’s unblemished gloves. It stunned the public when it went for nearly three times its high estimate and remains unchanged in its shock value today, illustrating the violent death of our collective childhoods, whimpering in the distance.

Keep It Spotless (2007): Banksy is arguably the most popular street artist in the entire world, and this $1.7 million spray paint on canvas reflects that fact. In all his anonymous glory, he has continuously captivated audiences with his highly publicized and subversive hijinks, dominating the scene for the last two decades. Heavy in its use of satire, Keep It Spotless riffs off the contemporary artist Damien Hirst and details a Los Angeles maid who is sweeping up under Hirst’s piece. It was one of Banksy’s first pieces to sell, setting a record still unbroken, even as his recent Girl With Balloon went for $1.4 million at Sotheby’s.

The Castle of Tin Tin (2003): Mr. DOB, one of Takashi Murakami’s most endearing, and positively terrifying, characters returns in The Castle of Tin Tin to highlight a certain darkness in pop culture. With a ferocious smile and razor-edged teeth, its boggling eyeballs immediately engage the viewer in hopes of evoking one of the most primitive emotions: fear. The enormous, 300 x 300 cm canvas had to be laid in two parts to achieve this spectacularly vivid effect, and in 2012, it sold at Sotheby’s New York for $3.7 million. This hammer price shattered Murakami’s records, and surpassed his previous Dob in The Strange Forest piece, which went for $3 million in 2008.

Untitled (2005): A Los Angeles muralist, David Choe was commissioned by Sean Parker to create a piece to adorn a wall at the Facebook HQ, then a new and experimental company. When given a choice on whether he would prefer to be paid in cash, just over a thousand dollars, or accept company stocks, Choe debated the fate of his hyper-sexualized, multi-colored figures. He decided to take the stocks. When he sold them, they were worth $200 million, making his piece one of the most expensive ever sold by a living street artist.

*Since this article was written, KAWS surpassed his own record when his work, The Kaws Album, sold for a staggering $14.7 million at Sothebys Hong Kong in April 2019. 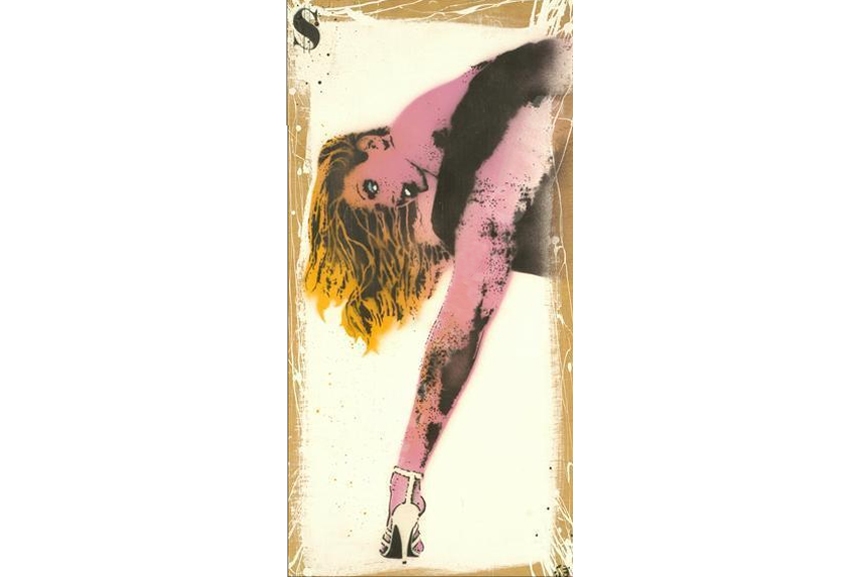 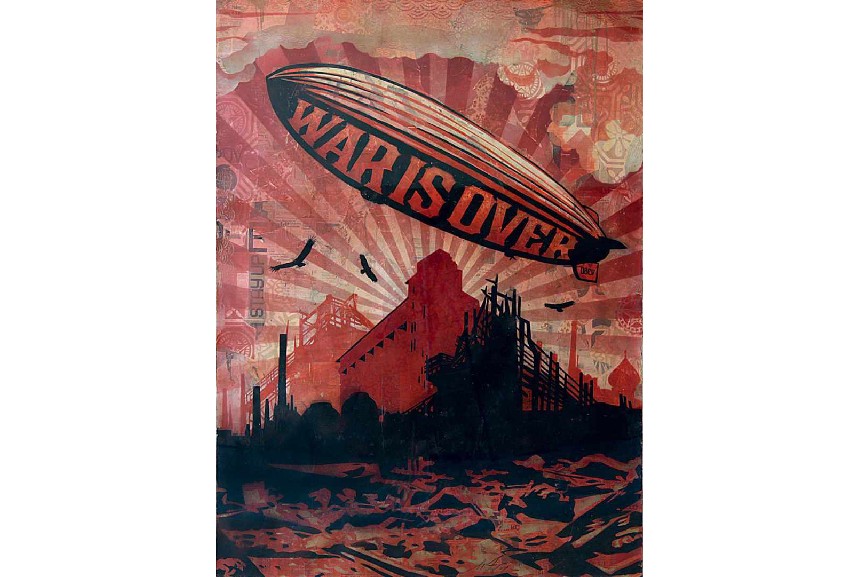 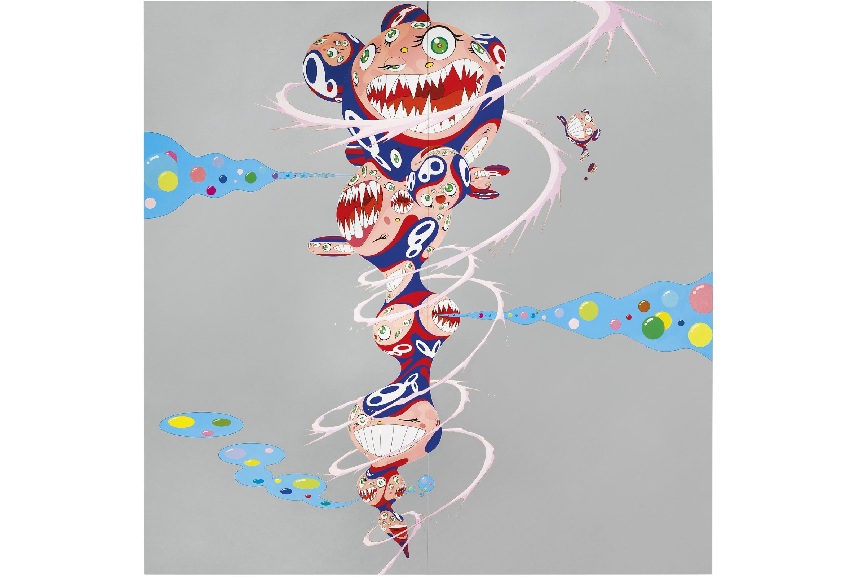 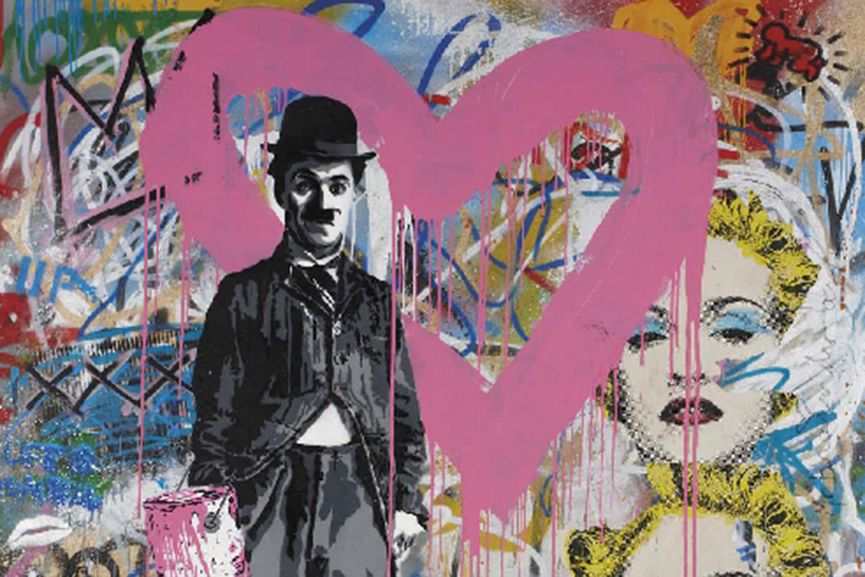 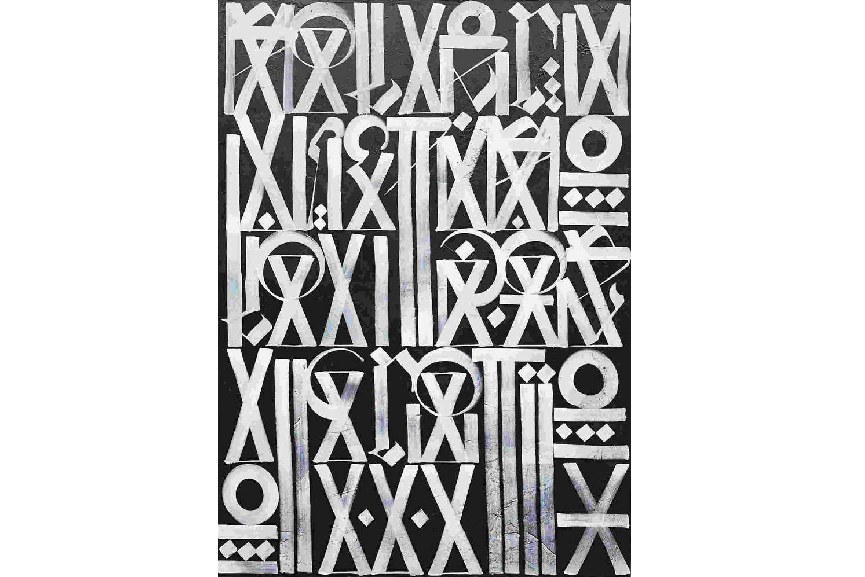 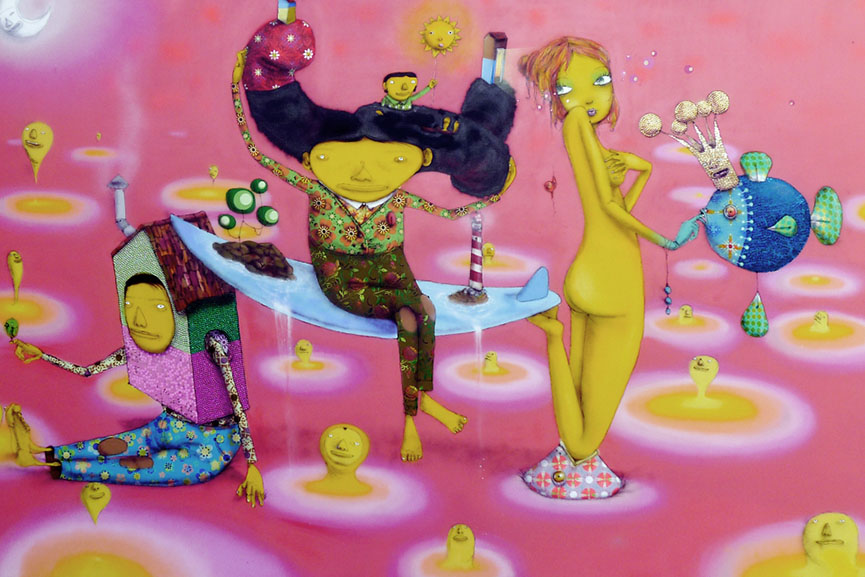 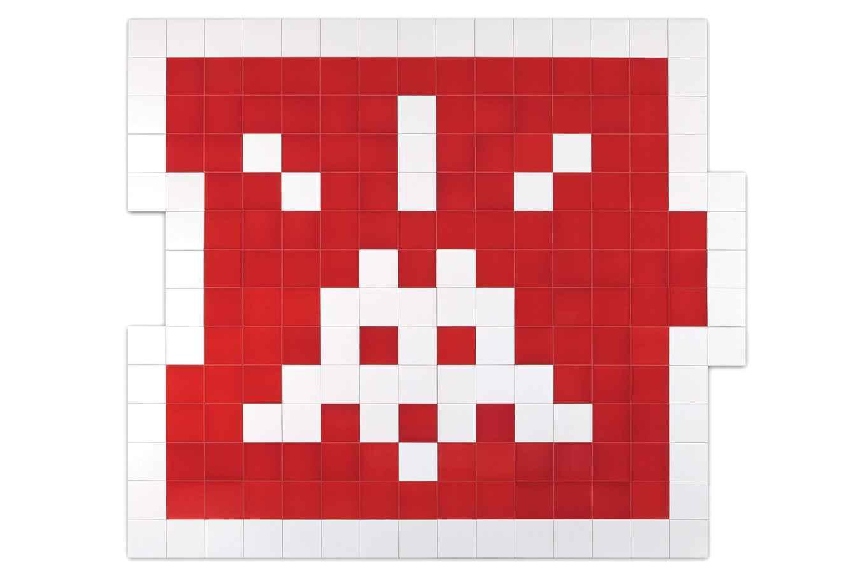 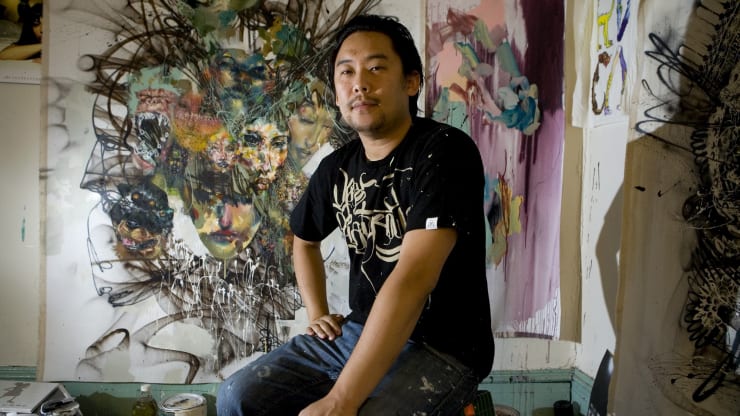 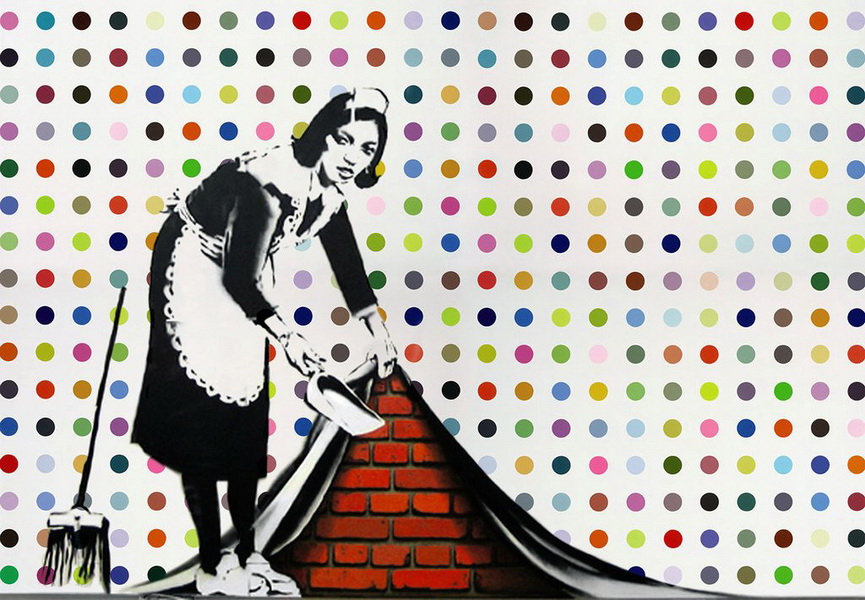 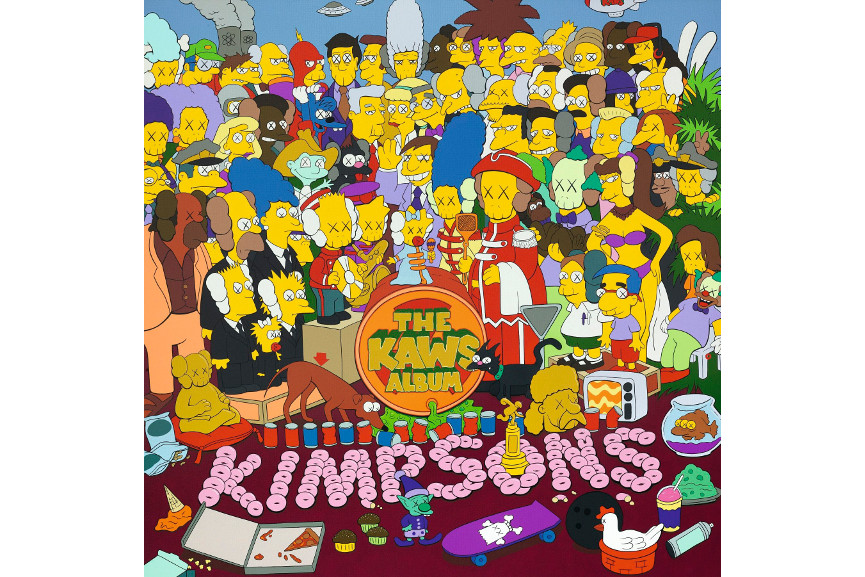 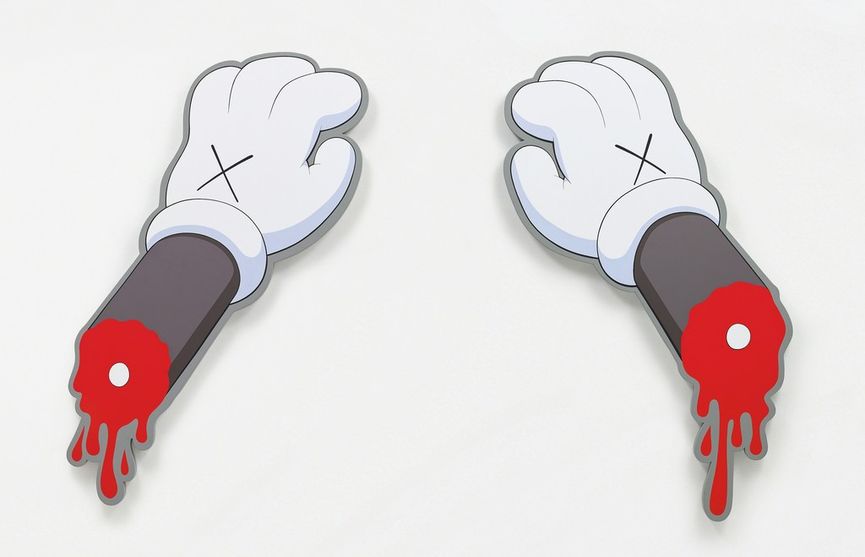