Trucks with Monstrous Sharp Teeth: The World of Abdul Vas

Written by Clar B Lopes

The interdisciplinary work of Abdul Vas is difficult to classify. It relates the most mundane aspects of our society with the most radical ideas of a universe of his own creation in which the protagonists are often cyber-humanoid trucks, robots, birdman, and the famous rock ‘n’ roll band, AC/DC. 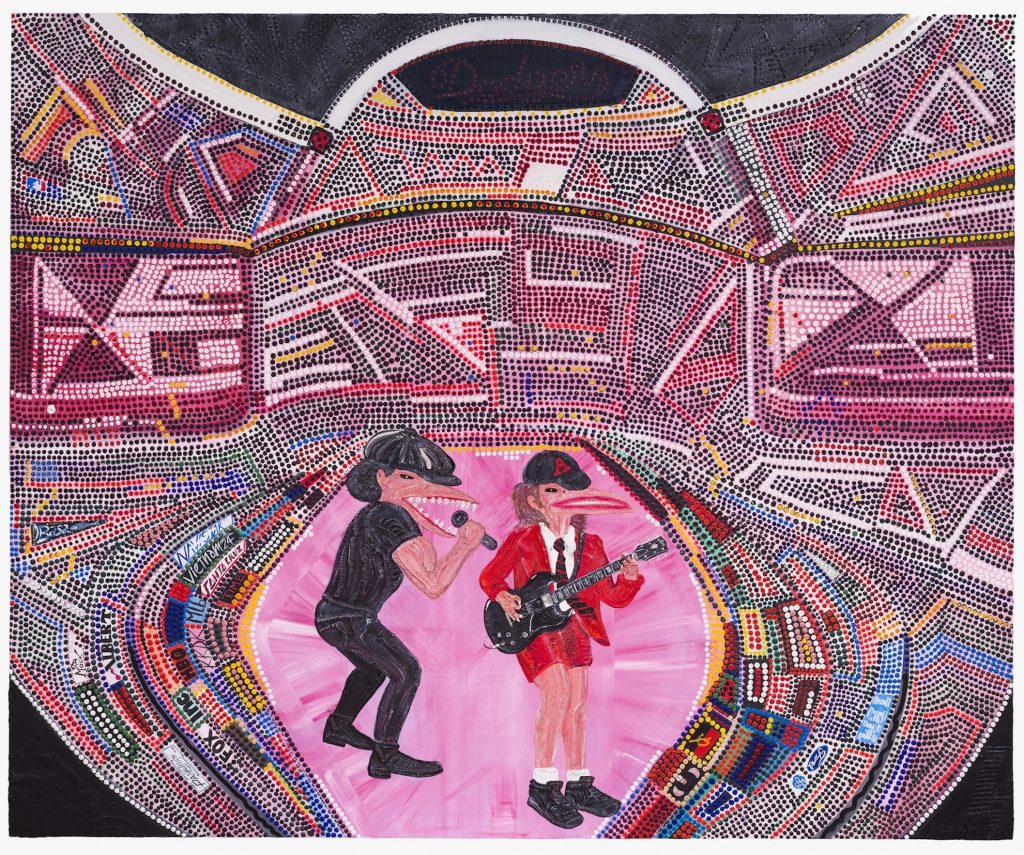 The first time I saw the works of Abdul Vas was about 15 years ago in Miami. It was an exhibition of large format paintings, but there was a small drawing that surprised me in many ways. This was a portrait of Brian Johnson driving a big Mack truck which Vas made to look like the cover of an AC/DC album: subtle, almost childish, but at the same time had an atmosphere which was both diabolical and beautiful. In the following large format works, his intention was to portray a universe in which American trucks again appeared, traveling long distances to attend concerts by the great rock & roll machine AC/DC. These big trucks were shown rusty from the passage of time, the years they have been on the road. They had a futuristic aesthetic, looking like they came out of Mad Max or Maximum Overdrive. These big machines were full of sharp knives, axes, screws, rusty nails, machetes as well as sharp teeth, bleeding gums, and huge wheels that could smash everything that got in their way. Many of them were inscribed with the initials AC/DC in flaming fire as if they had come out of hell itself. 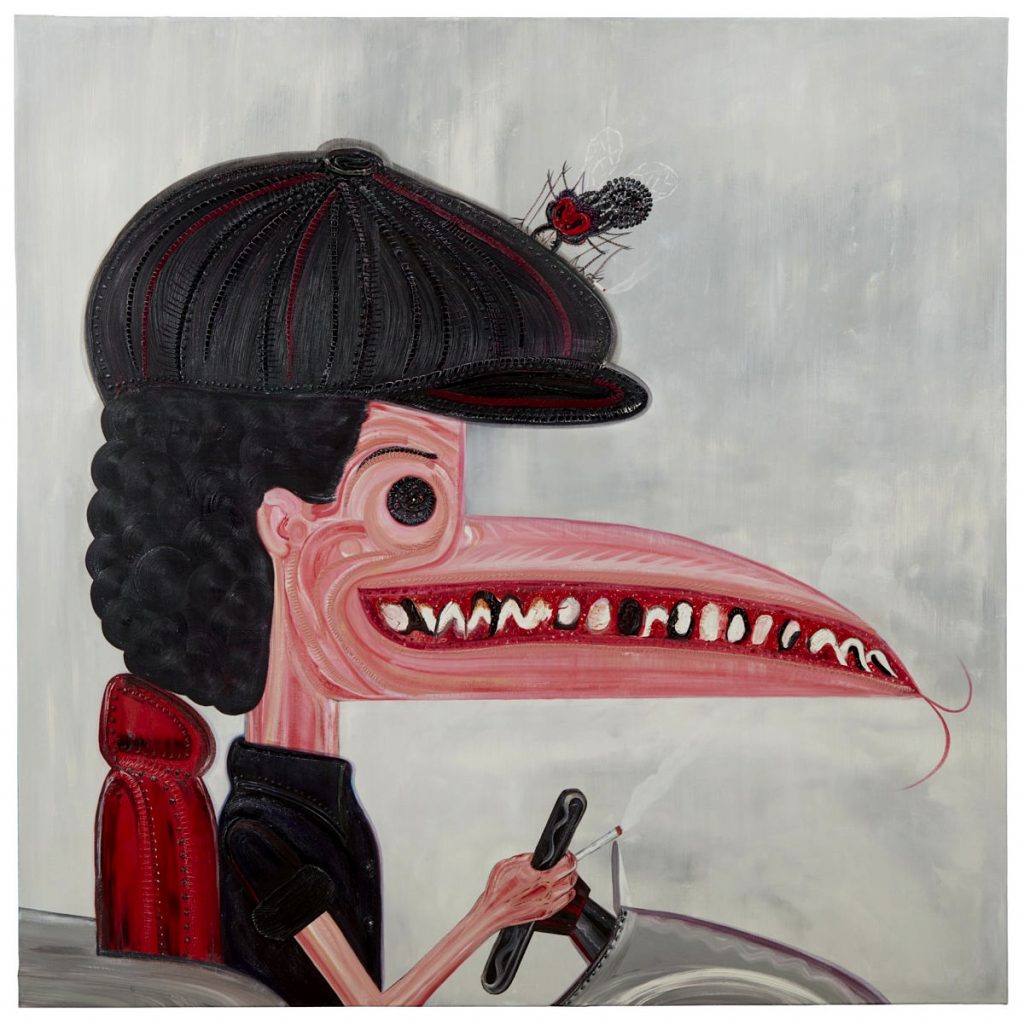 Vas’s work explores a new language that has nothing to do with the construction of a solid discourse, more or less adapted to the prevailing canons to which we are accustomed. It is unusual. It is wild. It is not part of a canon or any school. By not responding to any formula, law, or control, his paintings are a mixture of aesthetic elements: aggression, violence, and ostensibly marked by a frenetic handling of pigment. Nevertheless, they exude an elegance and a distinctive tension that makes them unique, the result of one of the most engaging approaches in our anodyne and temperate art scene.

It is unusual. It is wild. It is not part of a canon or any school. By not responding to any formula, law, or control, his paintings are a mixture of aesthetic elements: aggression, violence, and ostensibly marked by a frenetic handling of pigment.

His strokes are imbedded with a powerful energy and the usage of a limited range of colours. Yet the skilfully combined registers in many of his works resemble a physical struggle between the artist and the canvas.   As Vas even says, “I wanted to make art inspired by the power of AC/DC’s music, so it was necessary for me to break away from the academic past of art and all the established trends.” 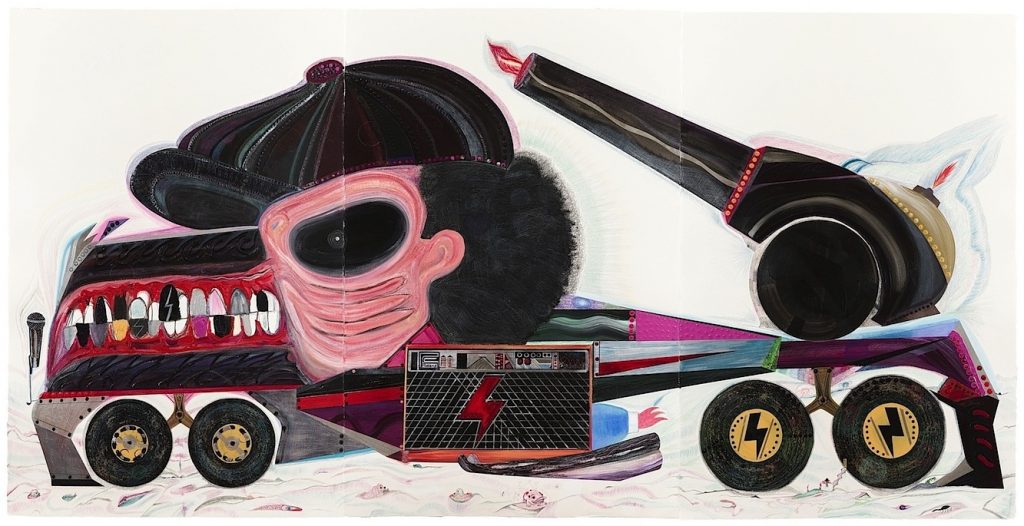 The dreamlike work that Abdul Vas has produced is an immersion into his entirely subjective and frenetic universe of contemporary mythology, rebellion, pleasure, power, and absolute devotion to one of the most popular rock ‘n’ roll bands in our history. Years have passed since that exhibition in Miami, but recently I came across Vas’ works once again and felt the urge to explore him and his universe once again. 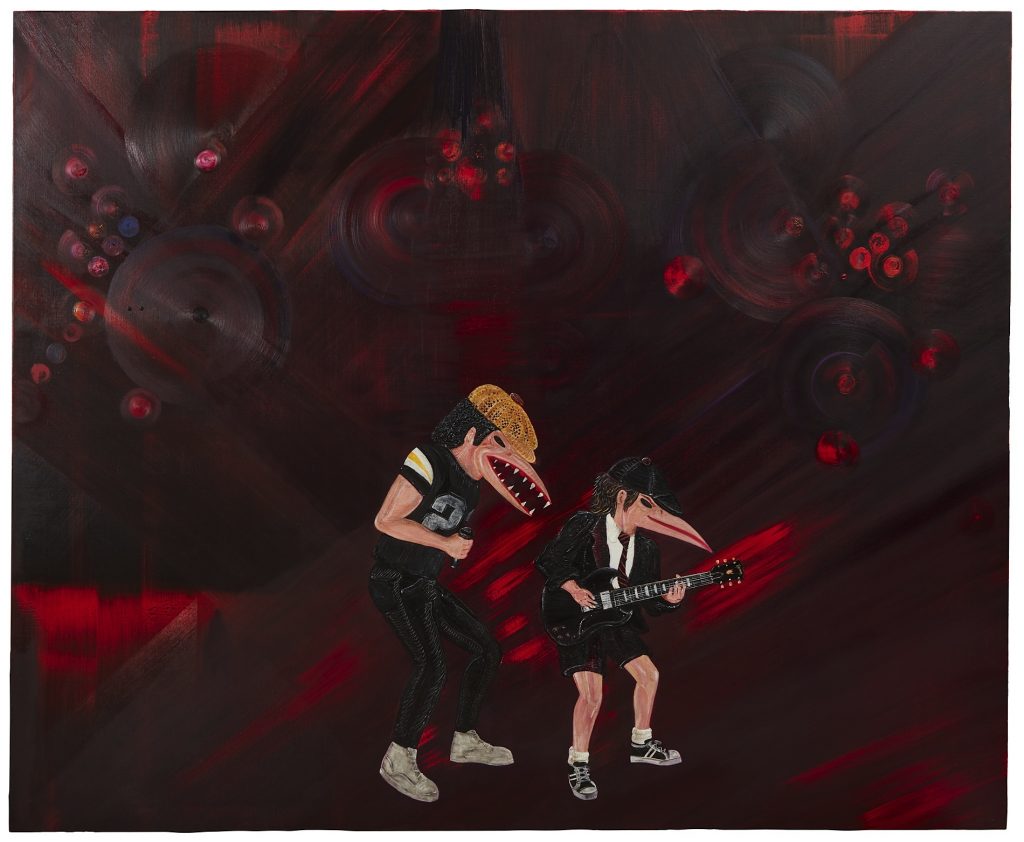 Vas first listened to AC/DC when he was a child – around the age of six or seven. He still remembers being instantly amazed by Brian Johnson’s voice, so there’s no surprise that the first albums he bought at the age of nine were AC/DC’s. “I remember it perfectly and it was one of the most important days of my life,” Vas tells, thinking back to when he held Who Made Who and Blow Up Your Video which are still a prominent part of his paraphernalia collection. What started as an early discovery soon became a childhood obsession that he refueled by listening to those old records. It was later, during his adolescence, that he realized that his creative universe revolved around their music.

Vas recalls a conversation that he recently had with a friend in which they said that all of his paintings are the same. “It’s only normal that they’re all the same,” he had explained, for they convey an absolute devotion and cult to the band. He continued, “You know that I like AC/DC; therefore, in my paintings obsession always predominates and the repetition for things that I really feel, or which speak to me. It is as if my brain or unconscious mind sent me sound signals, riffs, or rhythmic bases constantly repeating the same sound to me.” Abdul seems confident in his own skin, and, when he has a fixed and aimed objective, nobody is to distract him from achieving it.  Even when a concept seems crazy or ‘out of the box,’ working the idea till the extent of exhaustion embodies it with authenticity and a profound sense of truth.

“You know that I like AC/DC; therefore, in my paintings obsession always predominates and the repetition for things that I really feel, or which speak to me. It is as if my brain or unconscious mind sent me sound signals, riffs, or rhythmic bases constantly repeating the same sound to me.”

Despite the fact that AC/DC represents the major source of his inspiration and devotion, Vas has an extensive knowledge and even an eclectic music taste. He usually listens to music by the Beatles, Nina Simone, Eagles, Miles Davis, among many others.  There are also other themes that were developed by Vas from the very beginning like rock ‘n’ roll, American trucks, baseball, raging roosters, and other birds.  By focusing on these obsessions he is able to create a complex narrative. His creative process is triggered by a constant influx of stimulus. Vas uses visual resources to narrate his vision of a reality where the powerful music of the band is the soundtrack that animates all the action. In the end obsessions, dreams, and convictions are the fuel that makes him thrive. He appears as an agent of chaos. He is not trying to reveal any hidden truth. Instead he is more interested in portraying the complexity of the world while deepening it. 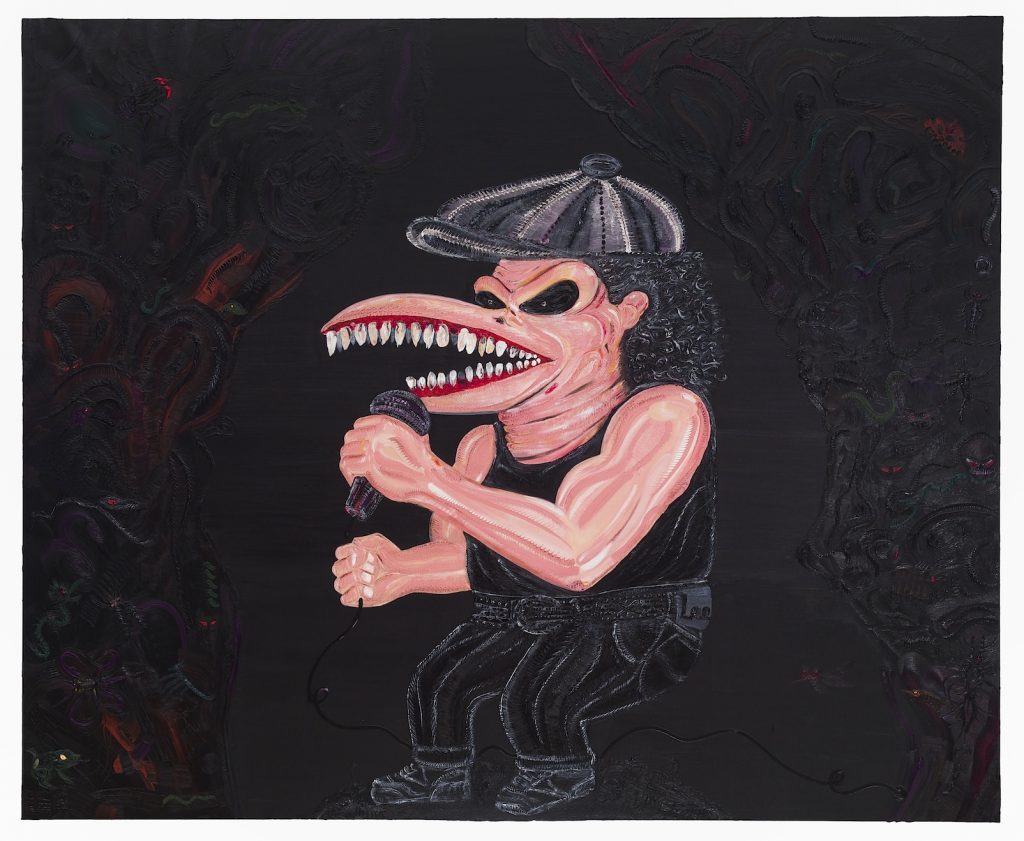 One might wonder on why Vas’ work doesn’t focus on current issues like controversial, impactful news, politics, war, or social networks. In fact, there are many artists trying to capture the zeitgeist of the moment. “Every artist is trying to do what is more suitable for their career, some seek polemic as way to gain a broader public recognition,” he says.  He is simply not interested in trends, because he considers that trends should never be art’s leitmotif. In his perspective, authentic works of art transcend trends. Vas never felt an internal urge to work on these kinds of topics. The current NFT fever amazes him. Nevertheless, his knowledge on the subject is not as profound as needed for him to make a sustained opinion. He only cares about being faithful to his creative urge.

For him the life changing event that continues to inspire him was when Vas first saw Brian Johnson on stage. He was instantly hooked. “The sensation of going to an AC/DC concert is thrilling. It is a sensation that triggers and motivates me. Once you arrive in the stadium and you see all the raging public waiting for the gods of rock ’n’ roll to come out. Then the lights are turned off. The most anticipated moment we have been waiting for has arrived: first you listen to a demolishing riff from a guitar and think they are ready to come out. The scenery lights turn on and in an instant you hear the voice of Brian Johnson. All these sensations that are felt thru AC/DC’s music are transformed into an orgasm named Rock n’ Roll.”

The inspiration he gets from the band is a reflection on the experiences he had throughout all these years of being an unconditional fan. AC/DC is solid, a constant, and unchanging base in Abdul’s life. He truly considers their sound to be a reassuring thing in an ever-evolving world.  The inspiration he gets from AC/DC goes beyond anything else – making it impossible to translate into words.  While he would love to be able to write about his own imaginary world, he instead uses gestures, colours and forms to explore and transform his ideas into visual depictions. 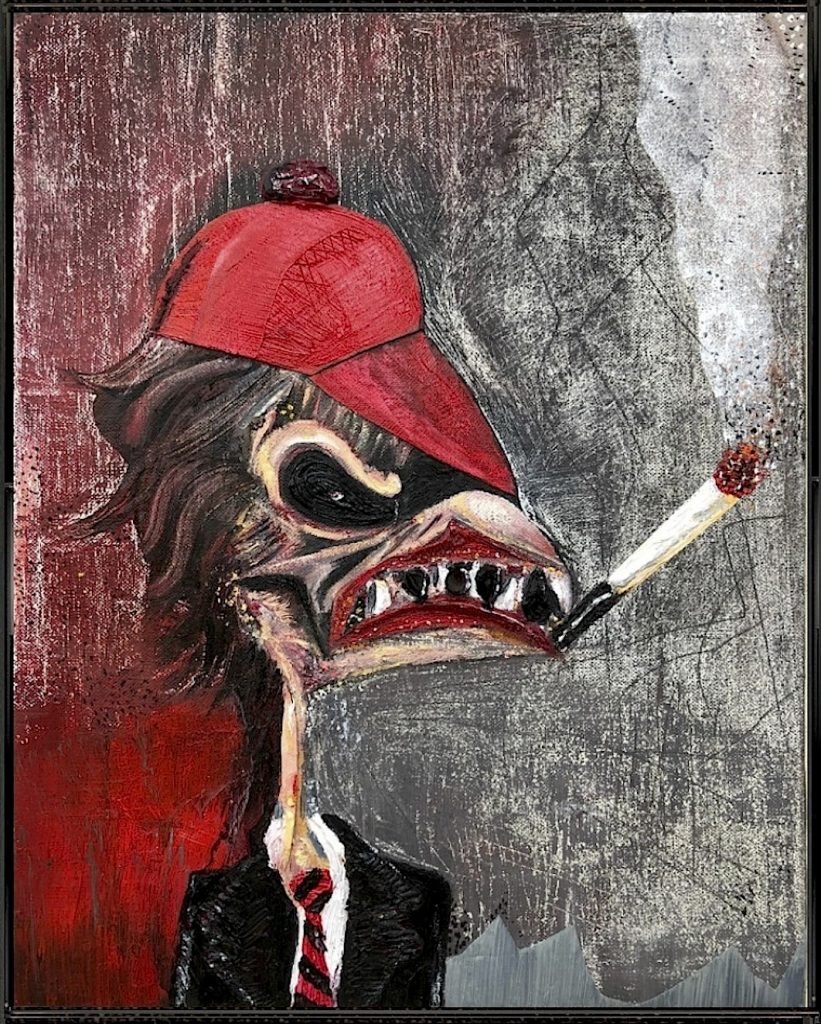 I can’t stop thinking about the Baudelaire quote, “Strangeness is a necessary ingredient in beauty.” We may look at Vas’s subjects of roosters, trucks, and machinery and see them as mundane and familiar isolated concepts. However, when we see them in his work they acquire a power that goes beyond words.  It is rather difficult to explain or even absorb it all, and perhaps we shouldn’t even try. We can’t fully understand this entities, they retain part of their mystery, of their strangeness and that’s what makes them attractive, eye catching and even hypnotic. It is strange, unsettling and in some ways grotesque, but in the end we should always leave space for things to return back some of our own gaze.

Abdul Vas was born in 1981 in Maracay, Venezuela. He lives and works between Madrid and Ho Chi Minh City. Vas’s works have been exhibited in the United States, Latin America, Asia and Europe and has been included in several international collections. His works have been included in group shows Shibuya Center Gai in Tokyo, The Composing Rooms in Berlin, Amp Tokyo Space, White Box in New York, Beo Project in Belgrade, Arcadia Missa gallery in London, the Matadero in Madrid, Centro Atlántico de Arte Moderno (CAAM) in Las Palmas in the Canary Islands, the 2009 Beijing Biennale, among others.