“You Can Too” – TRZA – Graffiti Counter Culture in Colorado Springs

America’s Mountain, The Air Force Academy, The US Olympic Headquarters. These are just a few of the headliners coming out of Colorado Springs, a smaller metro region 90 minutes south of Denver proper, not typically known for street art or graffiti.

As a California transplant with perhaps one experience with a spray can, I’m certainly no authority on the matter. Regardless of a lack of experience in street art, the idea of an exposure piece on an artist making his way from Colorado Springs was quite intriguing. As a brand new resident of Colorado Springs with certain conceptions of my new home town, I had questions and believed what I lack in expertise, could be made up for in emotional intelligence. 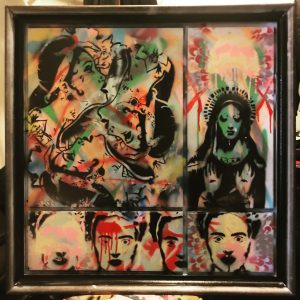 Analyzing a personality in conjunction with circumstance paints a more vivid picture than any simple Q&A could give. A simple scroll through the @grafiti_counter_culture Instagram and it was clear that there was a story here beyond a technical artistic deep dive.

Trent Langill, aka TRZA an artist residing here in the 719, is a man with a plethora of talent when it comes to his own stencil design. His goal is to show youth with limited options and equipment that you can indeed get up and paint, you can do it too.

While TRZA acknowledges that a big commission or future business deal certainly “wouldn’t be turned down,” he focuses his energies on making content from recycled materials with his own tricks and style. Not only does the work stand out, but TRZA takes it a step further and shares his specific techniques and hacks with anyone willing to learn. The main theme in these tutorials, regardless of your current struggle or background, there is nothing that keeps you from being who you want to be beside yourself and “the standards you let others set for you,” as TRZA put it.

While TRZA acknowledges that a big commission or future business deal certainly “wouldn’t be turned down,” he focuses his energies on making content from recycled materials with his own tricks and style.

15 minutes, a can of spray, and some free stickers from LivWell, Phantom Canyon Brewery, or Dutch Bros, and he’ll walk you through a tutorial on matching like ends, base coats, and the stenciling overlays that create an eye popping product from recycled raw material most could find wherever they reside.

No access to Stencils? He’s got you covered with a step by step breakdown of his best craft from materials around the house. Duct tape, a sharp blade and a design is all you need to get started. This begged the question, what’s next? What’s the overall goal? As TRZA puts it “there’s no one way to do it,” rather, he’s just trying “to live as happily as (he) can” while questioning the way we as society make the rules. 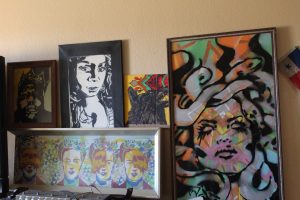 Despite the lack of booming street art culture and a typically more conservative demographic, TRZA has found a niche here in The Springs. His videos include a variety of underground rappers he’s gotten to know through his time in the music industry. Even when admitting to the legal and social struggles of painting “wherever the canvas lies,” his authentic nature shines through. It’s not just about tagging or following “any set guidelines by graffiti culture,” it’s about sticking to his message and staying true to himself.

TRZA wants the world to acknowledge that the way things are, is not the way it has to be. Sure that’s a generalized profound statement, but TRZA goes beyond the grandstanding. In his most recent video compilation, he shows kids that you don’t need the newest back pack, binder, or clothes from whichever department store. He displays the simple techniques anyone could enact to create a fresh school bag made out of a $1 reusable grocery bag, while also turning an old used T-shirt into a brand-new look that any kid would be proud to show on the first day of school. 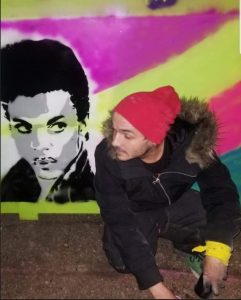 Everyone has a backstory, but this particular story creates gestalt like expression in the larger scheme, the sum of the parts is greater than the whole. Trent was born and raised in Panama (yes, the canal) before moving to the states with his biological mother and new step father who was active in the US military.

As a new young citizen in America there was certainly hope at first, but turmoil and chaos led an adolescent Trent to foster care homes where he spent his youth until he was old enough to get out on his own. Despite the darkness around him during this traumatic time, he discovered a new skillset: stenciling. Making and adapting homemade stencils and overlays, finding new materials like duct tape and card stock from junk mail ads to give him stability.

As a new young citizen in America there was certainly hope at first, but turmoil and chaos led an adolescent Trent to foster care homes where he spent his youth until he was old enough to get out on his own.

Even with talent, the world was a cold place (literally, the winters in Minnesota are frigid.) At an influential and trying time in his life, TRZA found himself getting into the music scene, specifically punk and hip hop. This is where TRZ’s blend of art, music, and culture began to mesh into the “not always positive” foundation that he continues to build on and learn from today.  TRZA “learned a lot of lessons” as a young adult mixed in a world of hustle and flow.  Drugs play a pertinent role in both youth and music culture, and TRZA found himself dealing with “real life” all by himself.  Once out of foster care, and navigating the harsh environment without a permanent domain, substance was an easy comfort to escape reality. This is where TRZA’s mantra of humanity began to take hold.

Looking at the complexities surrounding him TRZA sought a new path, a new start where his experience and outlook could be used to create for good.  After dealing with this nation’s foster care system and battling homelessness, addiction, and poverty, TRZA found himself in a new place and a new start, Colorado Springs. 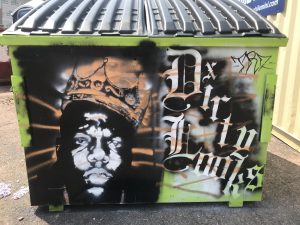 Once in the Springs TRZA got himself clean and found some stability creating art with explorative videos of his process, while at the same time owning and growing from his life experience.  At one point while discussing the state of humanity, and more specifically how we treat some larger world issues that he lived through, his tone remained positive despite the negativity he had overcome.

At one point when discussing homelessness he acknowledged “we are taught to just keep on walking by when we see it” like “that’s just the way it is…I’m tired of the way it is, and will do what I can to share a different message” TRZA uses his platform to not to preach but rather share his gift along with his story to create a poignant yet artistic expression.  His art speaks for itself on his YouTube and Instagram but what keeps the fire ablaze is his commitment to help all those in struggle, especially kids looking for a resolute path.  TRZA is not only talented but also altruistic, and that combination is a force to reckon with.

His art speaks for itself on his YouTube and Instagram but what keeps the fire ablaze is his commitment to help all those in struggle, especially kids looking for a resolute path.  TRZA is not only talented but also altruistic, and that combination is a force to reckon with.

Watch out for new content from TRZA as his most recent plans are to release a series of tutorials on creating your own hydro dip, to turn older warn shoes into popping statement of artistic expression, once again making a point to show everyone, there are plenty of ways, and of course you can too.