Willem Wolfe is an LA native, raised in an entertainment family with an early interest in art. With eclectic titles like “Vegan Bacon Confits” and “Ambien Palooza,” Willem’s music draws from hip-hop, electronic, and rave elements. However, he spoke to UP about his journey working with iconic street artist Shepard Fairey and his interest in visual art as well as music-making. 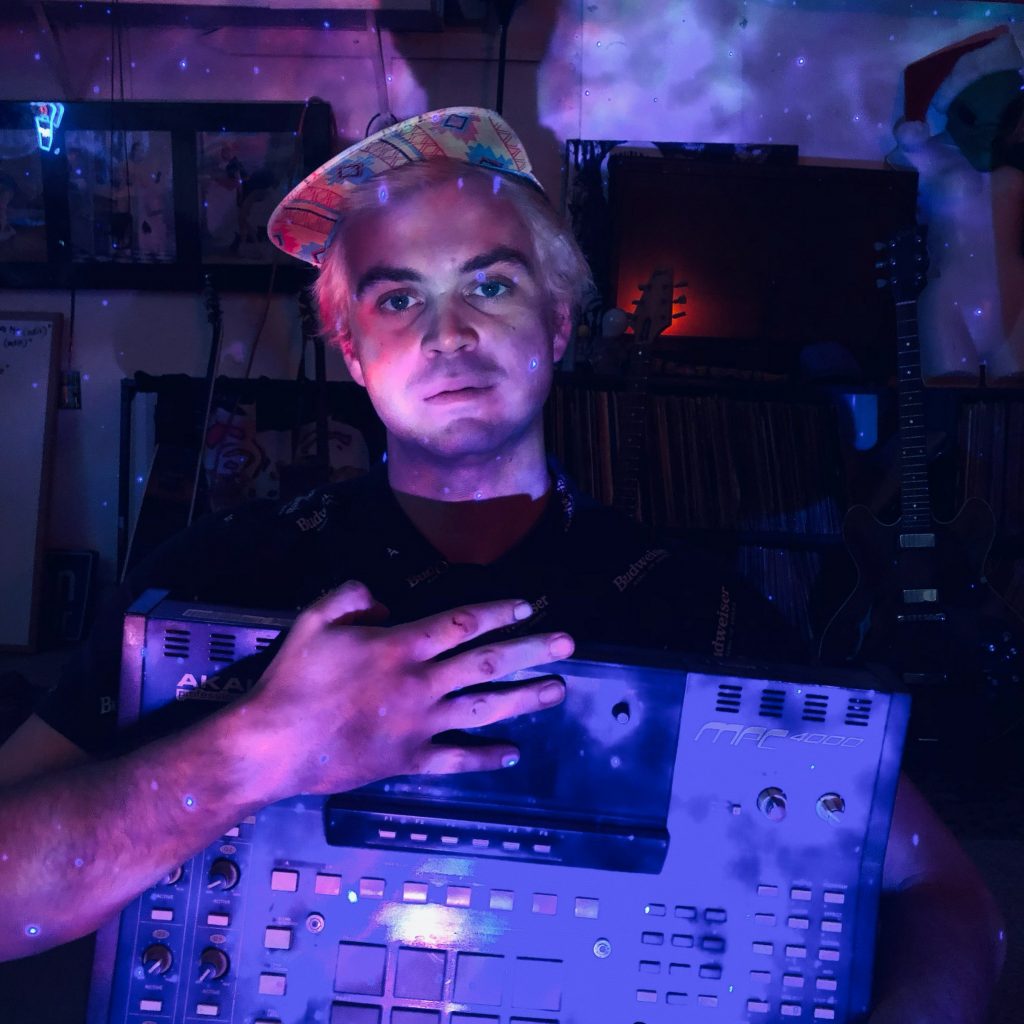 UP: The first question I always like to ask is, when did you first start exploring your creative side?

Willem Wolfe: I took to art at a real young age, doing coloring books and things like that. I knew it was always going to be something of an outlet for me to enjoy myself. I could tell that I just had fun doing it.

UP: Let’s talk a little bit about your music. So, you do electronic music?

WW: Yes, all sorts of music and I record other bands, doing production and other avenues in the music industry. But my solo stuff does tend to lean on the electronic side. Some of the favorite music I had growing up was techno-ambient house music, these things my mother would play around the house in the ‘90s. My dad gave me these tapes, and my first two cassette tapes were The Offspring, Smash, and Kraftwerk. Years later, I really found it so interesting how that summed me up. Still, to this day I love some heavy fucking rock shit, whatever. And then I love some really weird German stuff. Careful what you play your kids!

UP: When did you first start getting into music?

WW: Around twelve or thirteen was when I started playing an actual instrument, like learning the bass and guitar and drums. That was when I stopped playing sports, and got more serious about the music route. I told my pops, “I don’t want to play baseball anymore.” And he was all pissed off, which I didn’t understand because I was like “You’re a musician!” So I thought we could bond on that. But, baseball was something we did together, so in his eyes, it was like a big fuck you.

Later on, I was in some punk bands we self-released some albums. CDs, it would’ve been at the time. The Internet was around, and we’d just drop random songs of ours with a little video we made on YouTube just for the hell of it, since YouTube was new at the time. Weird concept to think about now, since I’m like “Did we have iPhones back then?” I forget I didn’t have that since it’s everywhere now. But, anyways, YouTube just seemed like the freest place to do that.  I would make a little image and put out an album, then release it on YouTube with the image as the video.

I’m slow to things like that—I fought Spotify forever, like even personally using it myself. What happened to going into Amoeba Records and buying a CD, you know, like a real human being? But eventually I was like, okay, fine, I’ll pay for Spotify. I’ll suck the devil’s dick.

I fought Spotify forever, like even personally using it myself. What happened to going into Amoeba Records and buying a CD, you know, like a real human being? But eventually I was like, okay, fine, I’ll pay for Spotify. I’ll suck the devil’s dick. 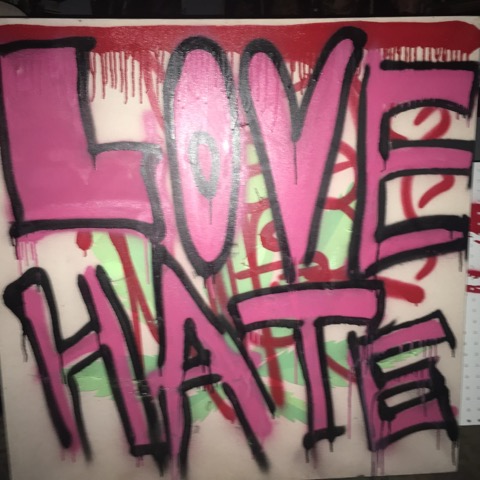 UP: I totally know where you’re coming from.

WW: Part of why I didn’t release on Spotify for a while is that it took me a while to develop self-worth as a person and as a musician. I didn’t really think about putting my music out there on a platform that was edible for the masses. Maybe because, number one, I have a love-hate relationship with the masses and I don’t really want to be popular. Number two, I don’t like the popularity contest, and that’s mixed in with a fear of failure, too. But just being older I realize, oh, I should go to therapy, have self-esteem, have self-worth. And I started doing work like that and taking a more professional or just more serious approach to making music.

UP: As a creative, your natural impulse is just to make stuff, but then getting it to people and selling it is another skillset.

WW: Selling it is a whole other beast. It’s an art form that I never was really good at it. Packaging stuff neatly for people to absorb and not have it just come out like this ball of insanity I’d just drop on YouTube that maybe some people would find it and think it’s cool.

UP: With the visual art you’ve done, how does that factor into your creative journe?

WW: I work for Shepard Fairy, and he gave me a gig apprenticing under him in 2017. I would paint some of the murals with him and worked in the warehouse, doing a lot of the fine arts with him and stuff like that. So that just helped me with the creative process back at home. Shepard had seen a piece of art I did and said oh, we do a similar thing, you’d be good apprenticing under me. And that’s how it all started. I’d be working with him and then going back into my own work, and it would all feed into each other with the techniques I’d learn at work and then go home and mess with it in my own stuff.

Just getting thrown into stuff is the best way to learn. When I was a kid, my pops took me on the road and had me do all this work for the front of the house, all this weird stuff like drum tech, guitar tech, keyboard tech. I loved it. It’s really helpful  to just get in the middle of things and then pick them up.

Just getting thrown into stuff is the best way to learn. When I was a kid, my pops took me on the road and had me do all this work for the front of the house, all this weird stuff like drum tech, guitar tech, keyboard tech. I loved it. It’s really helpful  to just get in the middle of things and then pick them up.

UP: Obviously, Shepard’s a legend in the art world. What is it like working with someone of that magnitude?

WW: Growing up with Obey around me as a skater, he was always influencing the people in my scene. My first stencil as a kid was of Henry Kissinger, and it looked very reminiscent of Andre the Giant. This ominous face where I was totally ripping off Shepard, totally a fine line between inspiration and just a rip-off. Getting to actually work with him was really cool, because it was just another level of the fine arts side after I had some experience with stencils and street art from the skate world.

WW: There’s a basic distinction in that street art is physically on the street and fine art is in a gallery. But anything past that is subjective to the observer, I think.

UP: That brings up a good question. Do you see really a difference between street art and fine art? And where would you place yourself in that? in that? You know, that middle ground?

WW: There’s a basic distinction in that street art is physically on the street and fine art is in a gallery. But anything past that is subjective to the observer, I think. 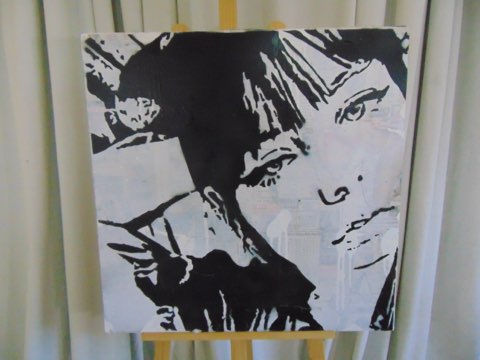 UP: Do you prefer painting on canvas or in the streets?

WW: I guess on canvas, because that’s where I create stuff and explore. Putting it on the street feels more for people to see it, as free advertising.  It’s a fun game to make something like that. To me, it’s like when a dog marks their territory by peeing all over the city, like claiming your space. And it’s a lot better than gangs or drugs or things like that.

UP: What are some projects you’ve got going on right now?

WW: Right now, I’m releasing an EP called Omakase on a techno house music label, Maison Fauna. That’s getting mastered and it should be put out sometime this year. I have a house music group, just a duo, that’s called Ground Score. I have a lot of little electronic albums in the works, and some other retro stuff. A few of my own solo projects that I’m staying busy with.

UP: How did you and Tamara Annis first connect?

WW: She’s doing online managing for me, and she has a big passion for that. She’s driven, and I wasn’t working with anybody at the time and I thought she was super cool and interested in doing the job. She’s a really sweet person.

UP: Are you still doing the cover art for the albums and EPs you put out?

WW: Sometimes I’ll do it. Sometimes a homie does it. Elena Lorenz is doing the cover for Omakase. I’ll get a friend to do it if I like their shit or it makes sense with the album, but sometimes I have an idea myself, like for Ambien Palooza that I put out on YouTube I think I made the cover of a pill bottle with the tracks on it. But I love to work with other artists. I don’t want it to just be me all the time. Music is a very collaborative thing to me.

UP: With your music, if you were to meet someone and they asked for what the best album or song to introduce themselves to your work would be, what would you say?

WW: Gastrique Remoulade Volume I and Volume II are really cool. They’re a bit more of my hip-hop side. But there’s a couple of tracks on it that start going towards more of an electronic avenue, so it’s a good way to see the different sides of my work. I like sending that to people right now, since everyone is really into that chill homework music from YouTube, so check it out.

UP: And you run Paint The Town podcast as well with James Shen, right?

WW: Yeah. James is really cool. We did a DJ set together as well. Tamara had hooked me up with him just to kind of chill and make a track. For me, making music is just part of kicking it with someone. I just like having something to do. We just started working on a song together, and thought it would be fun to keep jamming together. It worked well.

UP: Is there anything else you want our readers to know about?

WW: Just that I’m putting out shit and I’m finally giving a fuck about dusting off some of these creations!

Willem Wolfe’s music is available on Bandcamp and Spotify.

Emma Riva is the managing editor of UP. She is the author of Night Shift in Tamaqua, an illustrated novel that follows a love story between 24-hour-diner waitress and a Postmates driver. As an art writer, she is particularly interested in working with international artists and exploring how visual art can both transcend cultural boundaries and highlight the complexities of individual identity. is a graduate of The New School and a Wilbur and Niso Smith Author of Tomorrow. She lives in Pittsburgh, Pennsylvania.

T.K. Mills the Editor-in-Chief of UP and an art journalist based in New York City. After receiving a Master’s Degree in Global Affairs, he discovered a love for graffiti while backpacking through Cuba. T.K. has written for several art publications including SOLD, Global Street Art, and Arte Fuse. Additionally, he manages the street art blog, Well Pleased We Dream. Beyond art, T.K. loves reading and traveling.