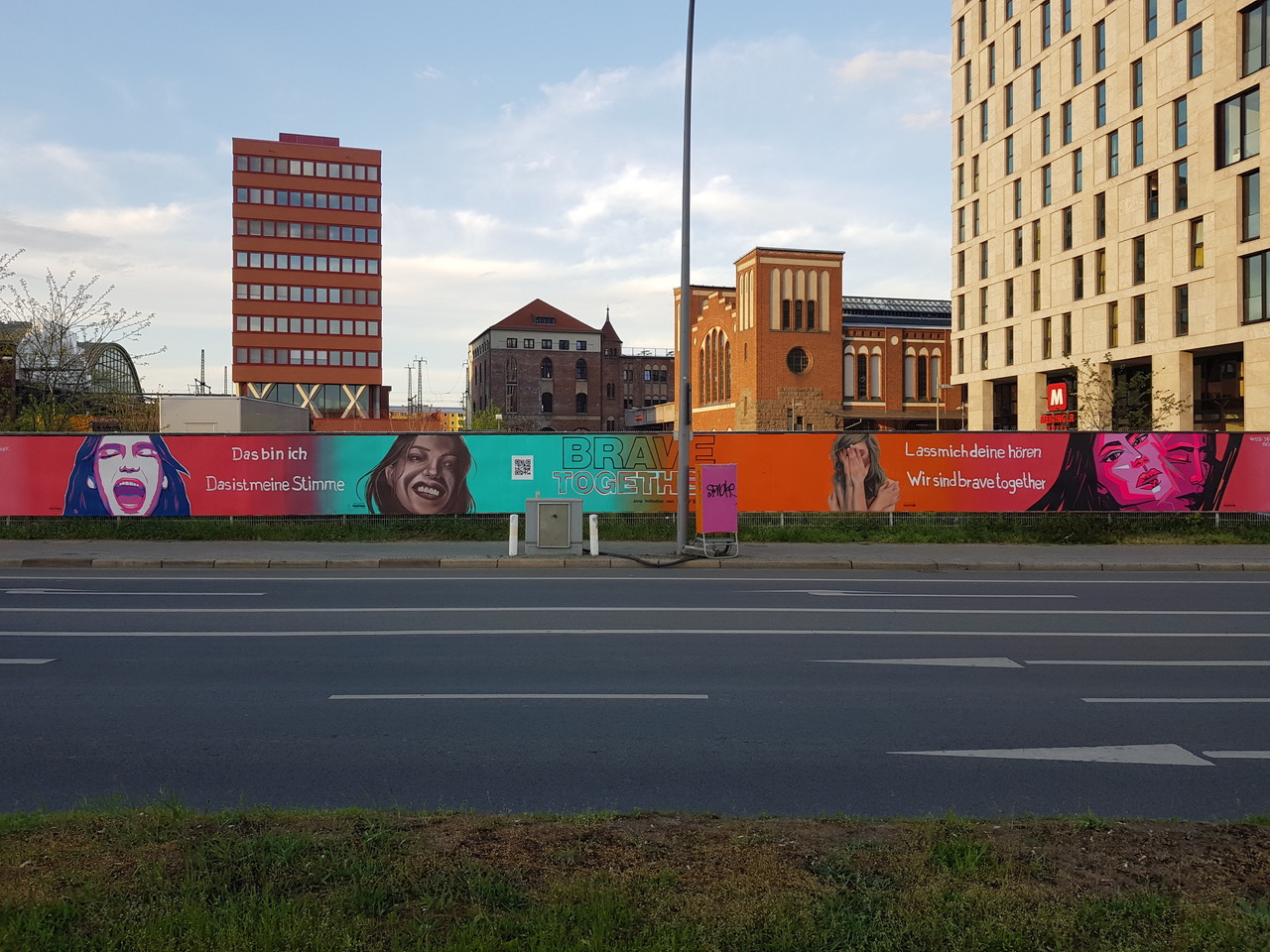 At first glance, the 30-meter long mural along the famous East Side Gallery in Berlin might seem to be depicting something cheerful and jolly due to its vibrantly striking color palette. Electric blue, baby pink, Princeton orange, and hot magenta, shades that can catch even the least attentive of eyes. Going in for a second and deeper look, what one sees is the portrayal of four female faces expressing contrasting emotions, braving to break the taboo of mental health.

In collaboration with Basa Studio, four female street artists were tasked with painting an emotion outlined by Maybelline Berlin. Fabifa, Caro Pepe, Anne Bengard, and LaMia Michna challenged themselves to each depict a woman embracing weakness, making sure she was not mistaken to be helpless but regarded with reverence. Maybelline Berlin’s mission was philanthropic, they wanted to convey a message of encouragement, reassuring women that it is ok to not be ok, that there are plenty of supportive resources available. Most importantly, women should see the mural and feel more inclined to join the global #BraveTogether movement. 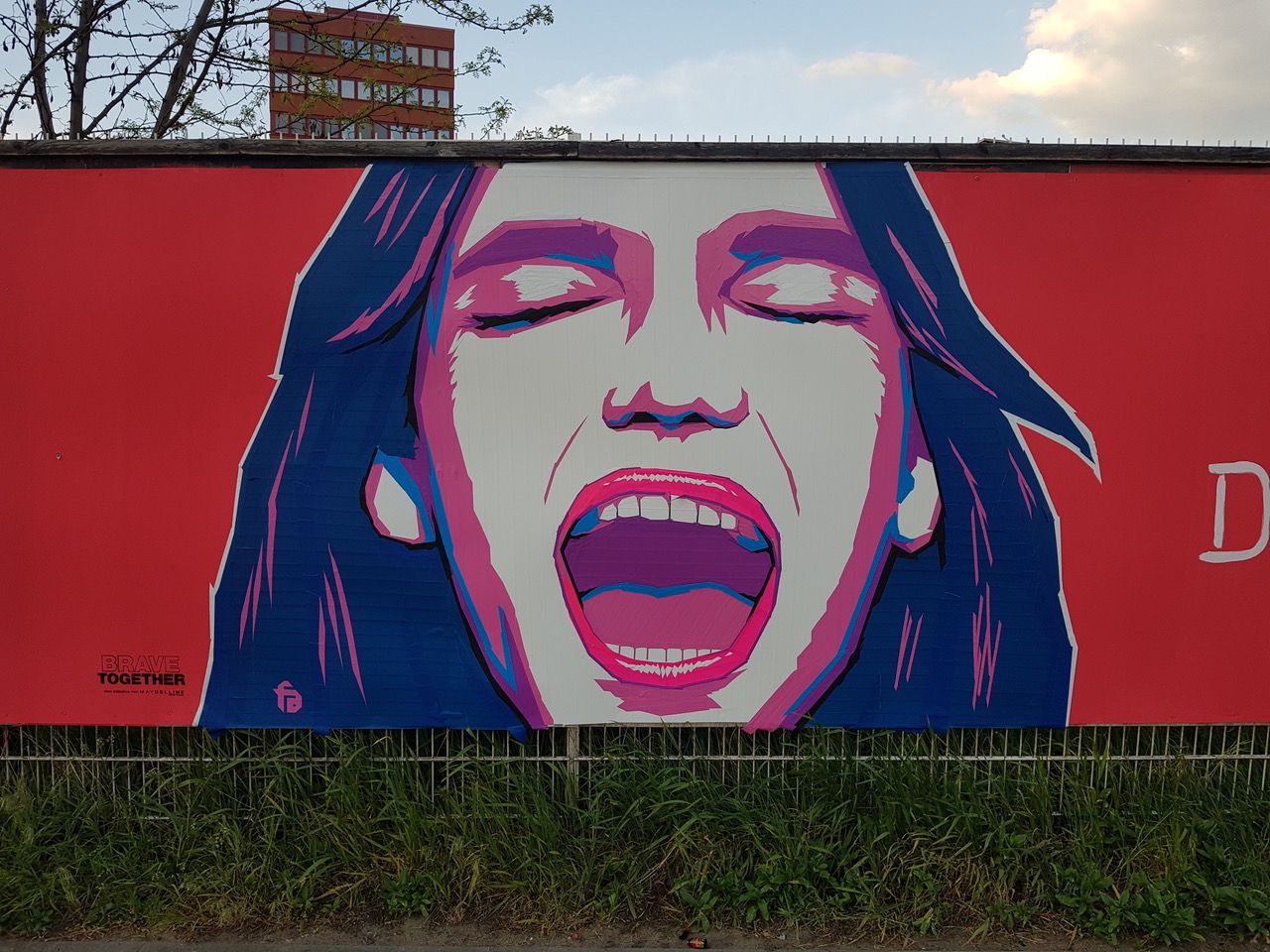 Basa Studio, a company that creates and executes artistic solutions for brands, connecting them to the right artist/creator on a value-based level, knew exactly who was up for executing such an impactful campaign. Four female street artists, some of whom are feminists, came together to work alongside each other to produce a powerful piece, reflecting their own struggles with mental health.

Starting from the left, with her eyes shut, we see a face of a woman letting out a wide scream. Her head is carefully outlined against the bright pink background using tape, an art medium that Fabifa, the artist responsible for that portrayal of emotion, says she enjoys using due to its ability to create contrasting straight lines between colors, operating the tape as her brush. This campaign hit close to home for Fabifa as the artist herself knows how it feels to not be able to express her emotions, instead, suffering in silence.

“This campaign meant victory over every mental breakdown I have ever had, I don’t scream so that’s why it was important for me to show it within the piece, my art is an expression of my emotions. It reflects my inner world.”

“This campaign meant victory over every mental breakdown I have ever had, I don’t scream so that’s why it was important for me to show it within the piece, my art is an expression of my emotions.” Declared Fabifa during an intimate phone interview. “It reflects my inner world.” As emotionally impacting the campaign was, the artist revealed how invigorated she felt to be a part of such an empowering project alongside three other female artists, who ended up growing close during the three-day application period.

As the background seamlessly transitions from pink to a vibrant aqua blue, the portrait of the next woman represents hope, exhibited as laughing and crying at the same time. The strokes are beautifully blended, leaving a smooth merging of colors, contrasting against the crisp outlines of the previous tape art medium. Caro, the artist who favors painting with acrylics directly onto walls, used this technique to express the woman overcome with emotion, perhaps showing a sense of relief. This isn’t the first time Caro has been tasked with painting a female character; the artist actually only prefers to solely paint women, frequently using them as her inspiration.

“I paint mostly female portraits, emotional portraits, I like to think of them as visual poems.”

“I paint mostly female portraits, emotional portraits, I like to think of them as visual poems.” Expressed Caro, who is no stranger to painting large, captivating murals. “My work underlines the subtle power of female figures.” She wanted to depict a woman who is hopeful, a laugh that is simultaneously conveying happiness and sadness, a woman who is not afraid of being perceived as weak and vulnerable. 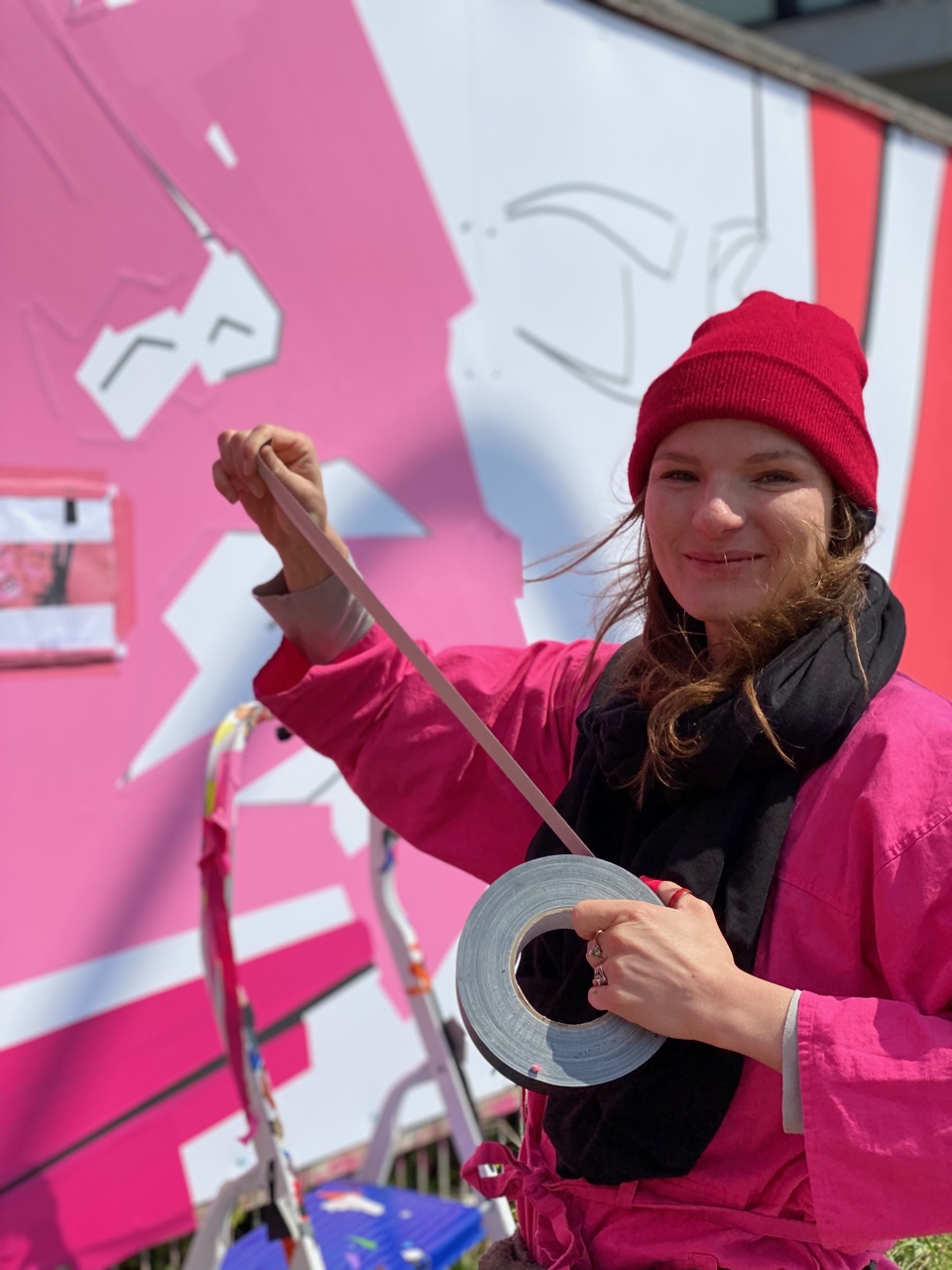 The remaining two portraits were completed in a similar manner, both representing profound yet silent mental states, allowing the audience to sense their pain while also knowing they are finding some sort of solace through this emotional release. An introverted, melancholic, silent sadness. 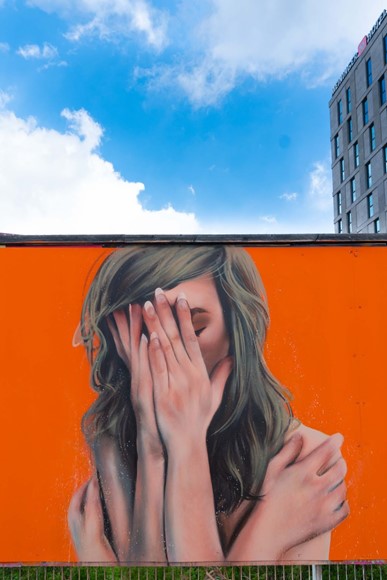 This woman wants a moment to herself, maybe there is a little bit of shame, but with her double hands she hugs herself suggesting it will be fine” -Anne Bengard on her portrait of a woman crying into her hands.

Like anything in life, this project did not come without its provocations. When they said #BraveTogether, they meant it. The artists had to battle an array of obstacles during the three-day production, themselves going through a whirlwind of emotions. From blistering winds to technical challenges such as the tape not wanting to stick to the wall, the artists always worked together to lend a helping hand, producing a result of blended empowerment of artistic styles that helped create one ephemeral mural.

Photograph by Caro Pepe, “a woman who is both happy and sad.”

Combining beauty and street art was unfamiliar to Maybelline Berlin, but the team at Basa Studio along with the four incredibly creative female artists created more than a once-off message. It encouraged a new approach to beauty advertising, the perfect campaign to offer artistic intervention because, in the process of creation, the artists conjured emotions expressing what we often cannot in words. This mural did more than just be aesthetically appealing, it helped reach women in Berlin, giving them a light at the end of the tunnel, bringing hope and lending a helping hand, all thanks to four strong and creative female artists.

Sasha Lukyanova is an Irish girl living in Berlin and currently interning at a street art marketing agency. With a background in film, she enjoys freelance writing about the arts, fashion, and anything in between. After her stay in Berlin, she is relocating to London in search of new adventures.