eL Seed, The Master of Calligrafiti

French and Tunisian artist eL Seed  started using his distinctive Arabic “calligraffiti” style on walls about twenty years ago, to spread the message of peace andHis artwork can now be found all over the world, consistently aiming at unifying communities and redressing stereotypes. He started breakdancing and graffiti-ing in the late 1990s, and wanted to mix urban arts and graffiti.

“When I began graffiti,” he tells me, speaking from his home in Paris via Zoom, “like most artists, I started by tagging my name on walls, eL Seed. Then, for personal reasons, I transitioned from using the Latin alphabet to using Arabic calligraphy. Soon, what started to interest me the most was working with local communities, wherever I went to paint.”

Recently, eL Seed participated in the making of a film, directed by Narinderpal Singh Chandok, ‘El Seed Beyond The Calligraphy’ (available on Amazon Prime since mid-July), which retraces his journey from a Parisian suburbs to the reconnection with his Arab roots and global acclaim.

“I really liked the filmmaker’s approach,” eL Seed adds. “He’s French, he contacted me in 2018, wanting to follow my work to dig into my artistic process. He understood why I don’t really like to talk about my private life. The film is about me and my life, it’s a first for me, but we had an understanding on some boundaries. He was never intrusive. So I allowed him to follow me on my diverse projects, up to Toronto in Canada, at the MoMA in New York City, in London, in Tunisia, etc. The result is a one-hour-long film, completed by a book.” 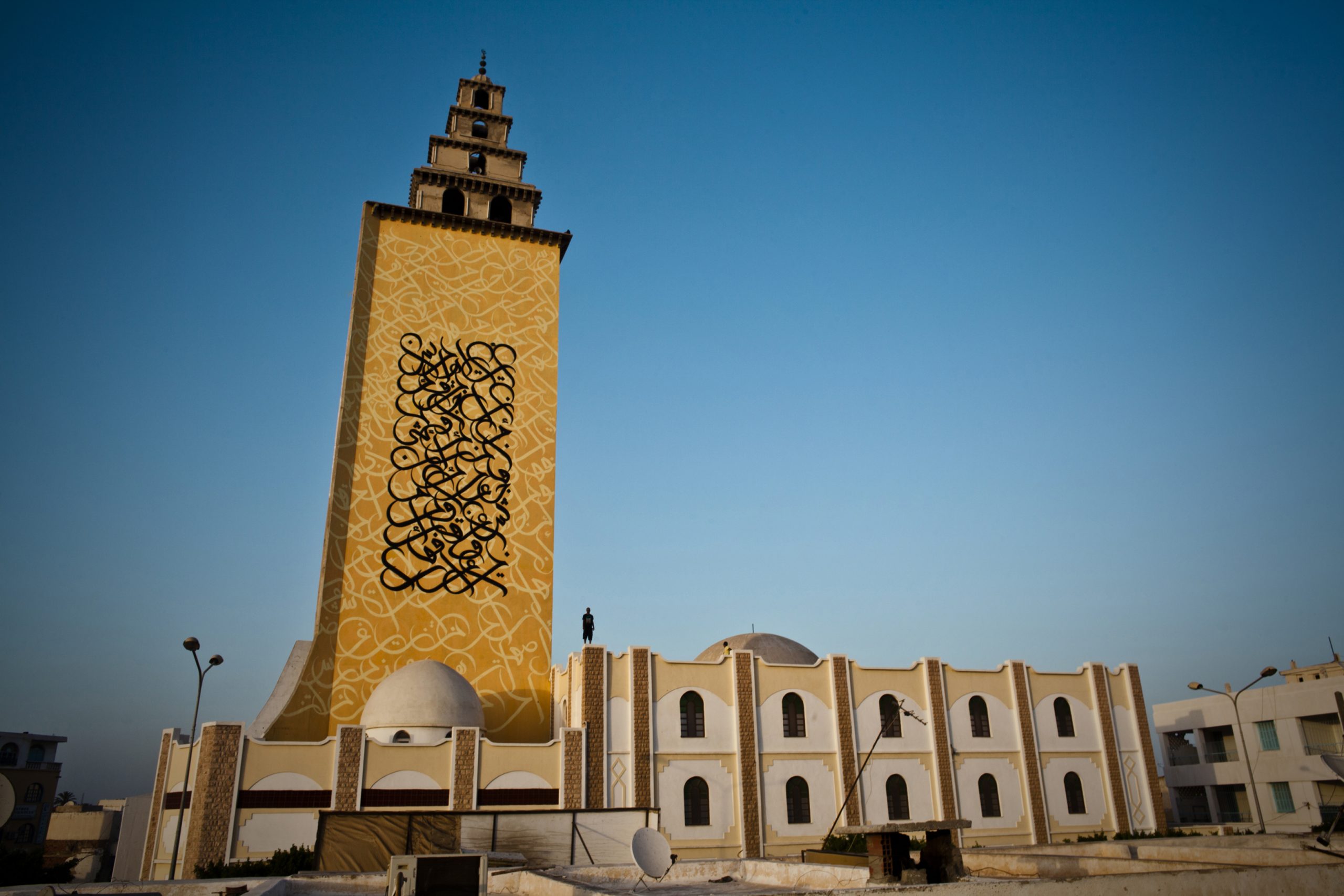 A boy from the hood

eL Seed – who’s never revealed his real name – was always drawing as a kid, attracted to animation too. Then he discovered hip-hop culture at age sixteen and spent the rest of his youth learning graffiti and breakdancing. His earliest memories of his beginnings in graffiti? “A standout is when Zefa from the GAP Crew painted me doing a head-spin,” he said.

For a while, like many Arab immigrants in France, he says, he grew up “disconnected from roots,” speaking the Tunisian dialect of Arabic at home, going to Tunisia over the summer, but feeling torn between his two countries. But at around eighteen years old, he went on a quest for a more profound identity and began to delve into his heritage. He learned to read and write standard Arabic, and, for a while, he felt less and less French, wanting to be  Tunisian. Calligraphy and graffiti helped him to reconcile his two identities.

eL Seed later went to a business school, but was still doing art on the side, though not seriously at first. He developed his artistic style with and through calligraphy, over the weekends, which would later bring him worldwide acclaim. That’s when he took on the nickname “eL Seed”, inspired by a famous French play by Pierre Corneille, Le Cid, which he read in school, like most French pupils. The name, “El Cid” in Spanish, is based on the Arabic term, “Al Sayed”, which means “the Man” or “the Lord”. It’s also a play on English word “seed”, as he was going back to his roots.

His calligraffiti includes verses from the Koran. He started practicing in his suburbs, near Paris. “At first, I used only five letters,” he tells me, “then I introduced longer words, and references to poetry. But my interest was from early on to connect and concentrate on local communities I could work with where I travelled to.”

Soon, he wanted to bring to light some of the forgotten regions of Tunisia. A few years later, he even painted on top of a 47-meter high mosque there.

Since the 2011 revolution in Tunisia, which outed the long-serving dictator Bel Ali and sparked the beginning of the Arab Spring in the Arab World, graffiti spread in the country, and eL Seed went to paint there. He was also featured in Djerbahood, launched by Mehdi Ben Cheikh, owner of the Itinerrance gallery, with fellow graffiti legends Invader, Inti, Ardif, and Shepard Fairey aka Obey. Taking place almost every summer in the village of Erriadh, near the city of Djerba, created discreetly in 2014, the festival bloomed into the most vibrant urban art event in the whole of north Africa, putting Tunisia on the map of world graffiti. 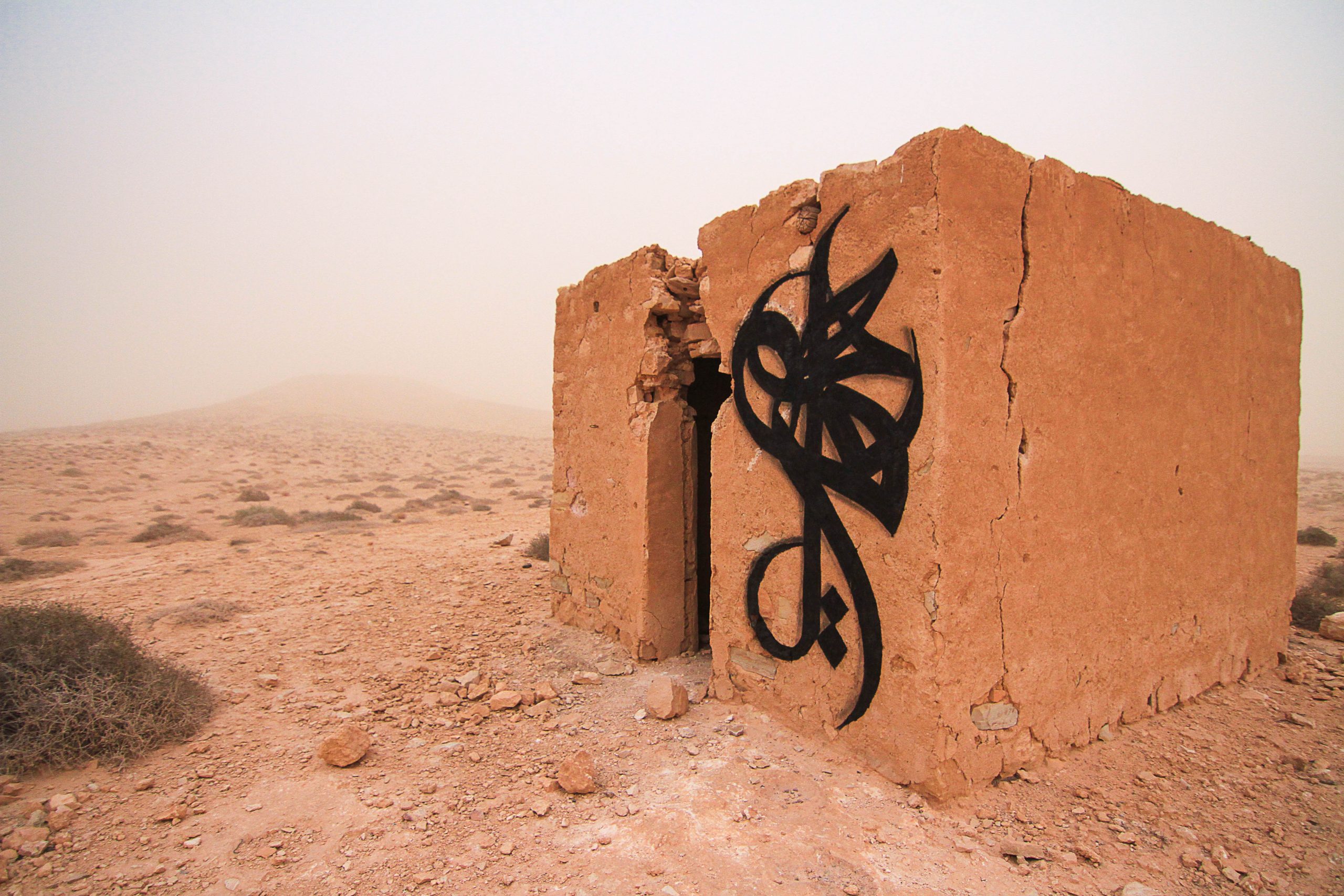 From Paris and Tunisia to a worldwide career

eL Seed has painted in public places on all  different continents, including most notably in Paris, in the favelas of Rio de Janeiro, in the slums of Cape Town, in the heart of Cairo’s garbage collectors’ neighborhood, and in the DMZ in between North and South Korea. Then it’s been shown in exhibitions in London, in Lebanon, in Algiers, in Toronto,Canada, etc.

In 2013, he even collaborated with the famous French fashion brand Louis Vuitton, on their famous ‘Foulard d’Artiste’. And in 2016, he was named a ‘Global Thinker by Foreign Policy’ for his project ‘Perception’ in Cairo.

In 2017, he won the UNESCO Sharjah Prize for Arab Culture.

More recently, eL Seed created a gigantic “calligraffiti” on one of the facades of the ‘Institut du Monde Arabe’ in Paris, a project overseen by the Itinerrance gallery.

But the most important for him remains the messages and the process behind his work, the choice of words in Arabic, the poetry, not only quoting the Koran or famous verses, but making and translating poetry from all over the world. 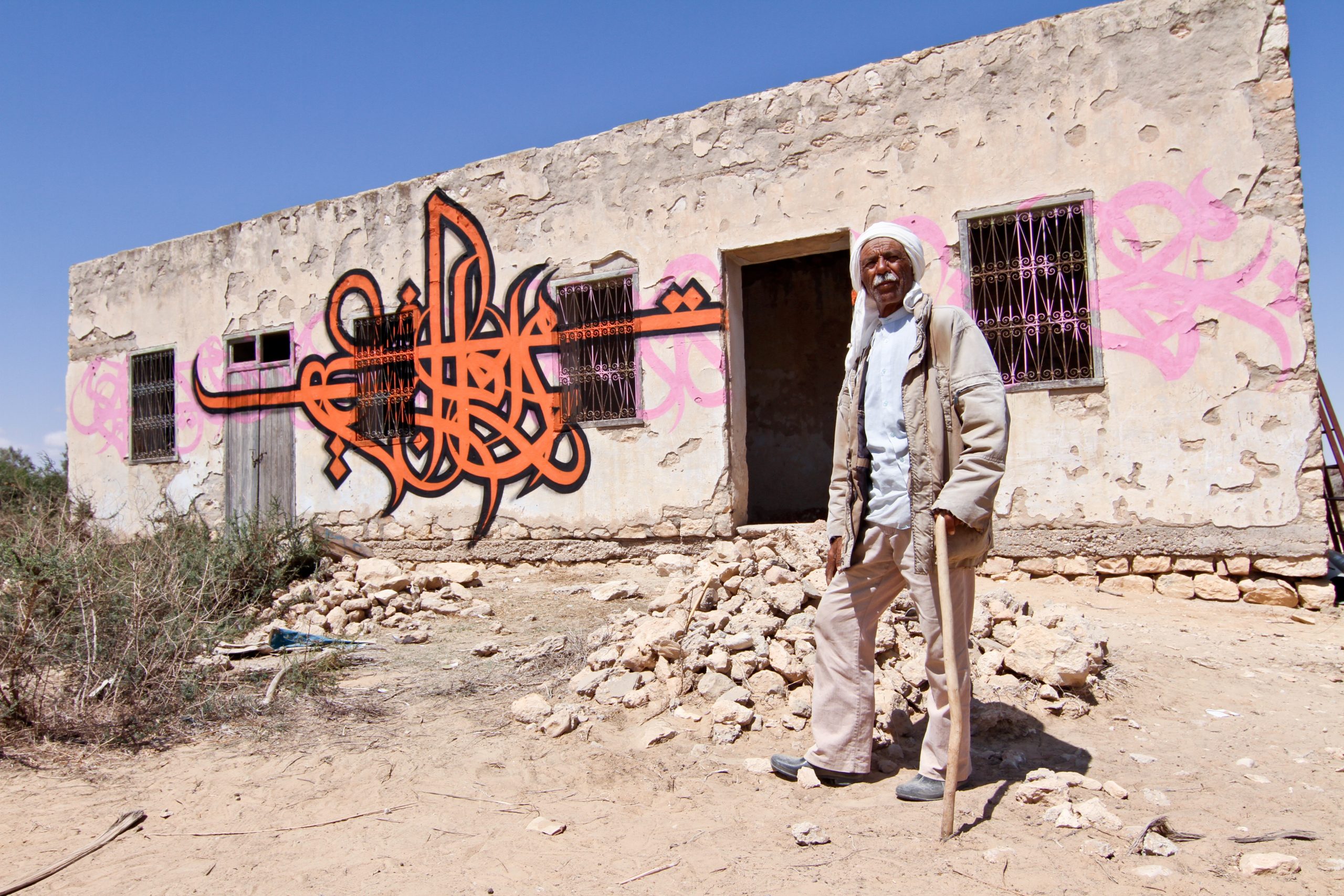 His Arabic letters can be found on walls all over the world. But for eL Seed, the thrill isn’t over.

“Now, I want to get out of my comfort zone a little more,” he tells me, “I want to be in perpetual movement and introduce changes to my work, even to show pieces that I never exhibited. I’m taking time to develop a new style. What happens to me now is that people come to me to ask me to do what they know me for, they ask me for my ‘classic signature pieces’, such as the round ones and the ones in the orange color. Which would mean to repeat myself, and I don’t want this to become mechanical. I want to break the reflex and to go toward novelty. At the moment, I’m looking to reinvent myself.”

What has changed too, notably, is his relationship to his bi-nationality.

“In France, some people easily associate calligraphy and the Arabic language to communitarianism and the Islamic religion, so they find that dangerous,”he explains. “When I wanted to create some calligraffiti for a wall near where I grew up, in Boulogne, in the Paris suburbs, the mayor did see it as a communitarian project, which is sad and ridiculous. So, in the end, it’s easier for me to go work when I’m less expected, to avoid stereotyping. I now want to define myself beyond my origins, as an artist. Earlier in my career, I needed to claim my roots, from Tunisia and from a working-class background, then I needed to reclaim my French side too. Now I want to express myself beyond this dichotomy. From Nepal to Italy, I want to be able to work with universal messages. In the end, I’m not an ambassador for the Arabic language or for French suburban kids. I was. It remains a part of my identity, for sure. But I want to be able to address other issues and to discuss my art beyond that frame.”

Never one to surf on any trend or rest on his laurels, eL Seed is working intensely on upcoming projects.

He’s thinking about directing a first feature film. He also became a father,  which made him think about how to better connect with the world as it changes. “I want to work in improbable places,”he concludes, “and I see them in Subsaharan Africa next. I now feel African more than Arab, it’s part of our roots as North African. We call the continent ‘Frigya’ in dialectal Tunisian.”

And while the colonial narratives tended to separate North African from their Berber pre-Arabic origins, to eL Seed it’s never too late to reconnect. “I want to navigate along the Senegal River, in West Africa, toward the islamic city of Saint Louis, Senegal, and contribute to breaking the stereotypes about African history. And I’ll do that by collaborating with locals, of course.

Like many artists from Africa, eL Seed seems to live in a moment of reckoning, and wants to interrogate these ancestral links. But there’s no doubt that he’ll do it in his own way.

Melissa Chemam is a journalist, writer, researcher, audio producer, podcaster, broadcaster and lecturer. She worked as a reporter from Europe, the Americas and Africa, mainly from Prague, Paris, Miami (USA), London, then Nairobi, Kenya, East Africa, and Central Africa for the likes of the BBC World Service, DW, CBC, France24, AFP, and Reuters. She has degree in European Literature from La Sorbonne and a Masters in Political Sciences & Journalism from Sciences Po Paris.
Instagram: @melissaontheroad
Website: https://sites.google.com/view/melissachemam