“Pitter Padder! Guys, look – meet a real Brooklyn artist!” I am striding through Meserole St. with a purple feather in my hair and glitter on my lids on my way to do henna at Joy Party and look up. 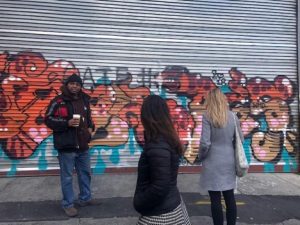 I am greeted by the warm smile of Edward AKA Staff 161.

“ME?,” I think, “Staff 161 is calling me a real BK artist? Wow.” We chat and I nod my head at the group trailing him and keep it moving. It is only as I walk away, do I realize the importance of what I had just seen. 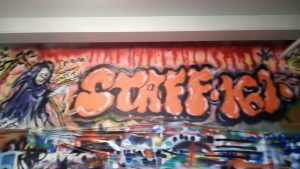 Staff 161 is a PIONEER of graffiti writing in New York – one of the first to begin tagging up subway cars in the 1970’s. And now here he was, leading wide-eyed tourists through the heart of Bushwick, teaching them the basics of graffiti and street art and inviting them into his own studio, where he hosts workshops.

Since then, I couldn’t stop thinking about this. Staff 161 is an OG and I had to learn more about his role and place in the current trendy scene of Bushwick. Read more below about my day with Staff 161 at his studio. 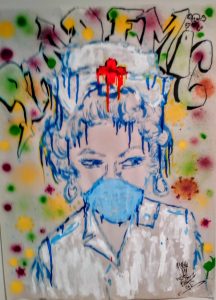 Edward’s studio is sweet and to the point.

Across one wall is splashed Staff 161’s iconic tag, in big pop bubble letters. 161 is a nod to his birthplace of Harlem and where he spent his early years. Around Edward’s tag is his famous graveyard scene, an homage to the 1970’s and his crew Ebony Dukes GC. A Grim Reaper holds a spray can squirting blood around a tombstone. In 1973, this character was the first character to appear on a subway car and marked a shift in graffiti writing culture from tagging to art and the inclusion of elements and figures with a tag as a part of the scene rather than the main focus. 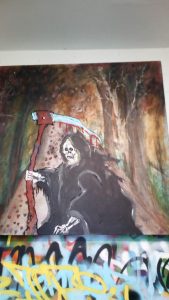 Ebony Dukes was named to represent the folks fighting the establishment, aligning with the Black Panther movement. Ebony indicates color and Dukes, fists. This rebellious name translated to the mission of Ebony Dukes – to tag one of the most easily accessible modes of the establishment… the transportation system.

On the next wall of Edward’s studio, is a wild style scrawl of the word “Graffiti” – a nod to the development of graffiti in the 1980s. Two bookshelves are filled with spray cans and a stack of graffiti montage books and rolls of loose canvas lay in the corner. 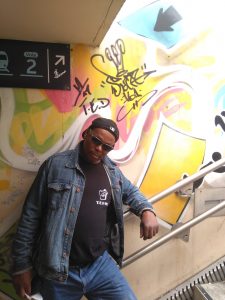 Despite his status in the graffiti world, Edward is humble and passionate about his craft.  To Edward, the trending interest in graffiti and street art was a matter of time. He is eager to share his knowledge and how he entered the world of hip hop.

As a child, Edward and his brother were shuffled around the foster care system. He picked up a spray can at age 11 and quickly formed his own crew, considered to be the first NYC subway writing crew. His work was first documented by Norman Mailer and photographer Jon Naar in their book, “Faith of Graffiti,”. This was the first book published about the subway graffiti writing movement and marked an emergence of documentary photographers tracking writers across the world. It established Staff 161 as a first-generation pioneer of the writing movement. 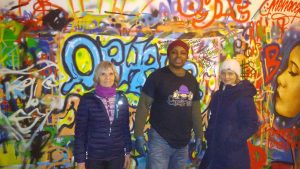 Edward was the father figure of his crew and learned to navigate the neighborhood and keep his crew safe and out of trouble. This was also his way of keeping he and his brother away from an abusive foster home.

Tagging became an outlet and refuge. “Where I grew up in the South Bronx, the street I was living on was a rough area…Markings on walls is not new to human civilization. Ancient cave writings, hieroglyphics, cuneiform… tagging was a youth movement”. You used what you had. What they had was concrete, paint, and the electric energy of a pre-teen.

Staff 161 quickly established himself as a lively and innovative tagger. As Edward relates, the commodification of graffiti was inevitable.  “You have people who are very wealthy off of street art and graffiti. This whole commercial thing came out as a response to the popularization of street art and graffiti….a lot of this went to Europe. They really embrace the phenomenon.” Edward points at each spray can company and rattles off where they came from in Europe – Spain, Italy, France…

Soon, a group of 6 folks join us for a 1 PM graffiti tour. Edward leads then up and around the block, pointing out methods of street art (wheat pasting, stenciling, spraying) and signature styles and artists. He fields questions like, “Are they…legal?” and points out to spectacular scenes by artists all over the globe, whom have come to lay their mark in Bushwick.

Despite the popularity of graffiti all over the world, from Europe to South America, a hub remains here in New York. Edward remarks that for international artists, coming to New York, “It’s like their pilgrimage. To get a train in New York. Get a picture, put it online. That’s what’s happening with the advent of social media…. Now, they’ll give you a terrorist charge if they catch you in the train.” 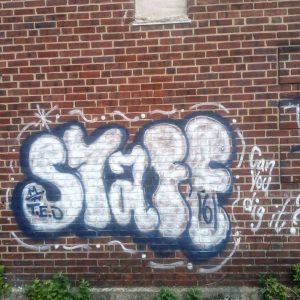 Edward’s Notes on his role in graffiti history

Like that soul music era Marvin Gaye tune “Trouble Man” states: ‘I come up hard baby, but not cool. I didn’t make it sugar playing by the rules!”

As a first-generation New York City train tagger & writer I would be considered a significant part of the blueprint or DNA for what is known now as Graffiti Art, which spring boarded the aerosol Street Art movement that is recognized internationally today.

In the Fort Apache section of the notorious South Bronx, the pioneer graffiti crew The Ebony Dukes GC, which I founded in the spring of 1970, would add spray painted tags and murals as a backdrop for the gangs, drugs, fires, poverty, and crime that was the chaos of the seventies South Bronx.

I didn’t have formal training, but I used my natural sketching ability as a voice and form of expressive embellishment in my tagging activities.

I always viewed art as a creative outlet and the public domain as it’s venue; thus, eventually the mass transit system became the focus of that creative energy and expression. The elevated IRT 2&5 trains were in the center of the neighborhood and thus became a mobile canvas for the taggers who knew that the trains would carry their urban calligraphy all city! Even social media can’t compete with that kind of exposure in the greatest city in the world.

This would give birth to what is known as ‘Can control’, the use of spray paint as a writing and drawing tool. The world hasn’t been the same since.

My iconic 1973 Grim Reaper train painting was the most dramatic and earliest example of that new cultural skill, as it was the first use of characters conceptually in a graffiti art train masterpiece. This would inspire generations of taggers and graffiti artists to come.

Some of my subject matter can be viewed as dark art, but I’ve always painted things relative or expressive of my experiences. Initially that’s what the aerosol movement was all about in the late sixties and early seventies here in New York and South Philly; a voice and expressive outlet for the disenfranchised!

Alongside graffiti was MCing, DJiing, Breaking which appeared around the same time period in the South Bronx, all which became unifying activities for youths throughout the city and eventually globally; the rest is history!

Interviewed and written by Sadaf Padder, founder of @AlphaArtsAlliance

To join Edward on one of his tours or at his studio, follow him on Instagram @edward_graffiti.

You can learn more about his crew at www.misterebonydukes.com/.