It was the winter solstice, and the town of Summit glowed with string lights throughout the streets. The sky was awash with hot pink and lilac. After my arduous day of traveling, the small New Jersey town was a welcome respite for me, blanketed in calm by the dusk. The darlings of the art world construe suburbia as lacking the “cool” factor of its neighboring cities, but the calm, quiet, and spaciousness attracts creative people all the same.

I’ve always had something of a fascination with New Jersey, a place that seems to be divided up into towns that feel like each one is a different world—and with my sensibilities as an author, it brings to mind Philip Roth’s sardonic awareness of class. On the way to Summit, I passed Short Hills, where Jewish debutante Brenda Patimkin lives in Roth’s Goodbye, Columbus. As well as its oft-overlooked literary history, small Jersey towns like Summit just forty minutes from New York are unassuming hotbeds for public art.

Estelle Fournier, an art consultant and a board member at Summit Public Art, showed me around the town’s installations on that brusque evening. “We try to pick public art pieces that resonate with people and speak to the local character,” Fournier said. A standout piece is Union County native Bryan Zanisnik’s “Silk Monument,” a sculpture which sits on Summit Village Green across from the New Jersey Transit station. In the late 1800s to early 1900s, Summit was “Silk City,” the silk mill capital of the United States.

The silk industry was largely made up of Armenian and Syrian immigrants, and Zanisnik’s piece shows viewers the faces of the workers who made the garments of the wealthy in the Gilded Age. The piece consists of two small columns covered in photos of men, women, and children of Silk City and their community center, which sat at what is now Summit Antiques House. It’s a unique work of sculpture that speaks to the character of central Jersey as not an offshoot of New York but its own entity with its own history. 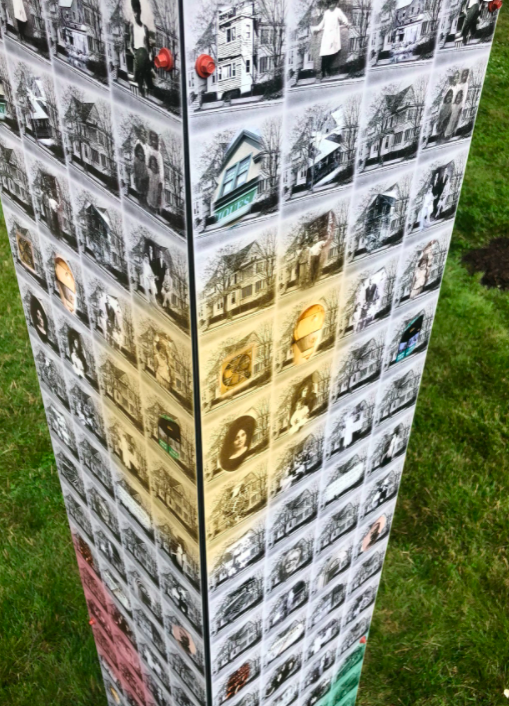 Fournier led me through Summit to each one of the public art collective’s installations, including work by Tom Fruin and Willie Cole. At the characteristic stained-glass house Tom Fruin put up by the city hall, both of us stopped to watch a father and daughter standing inside of it. It was the perfect photo-op for public art—art that anybody, young and old, can interact with because of its open presence in its local environment. 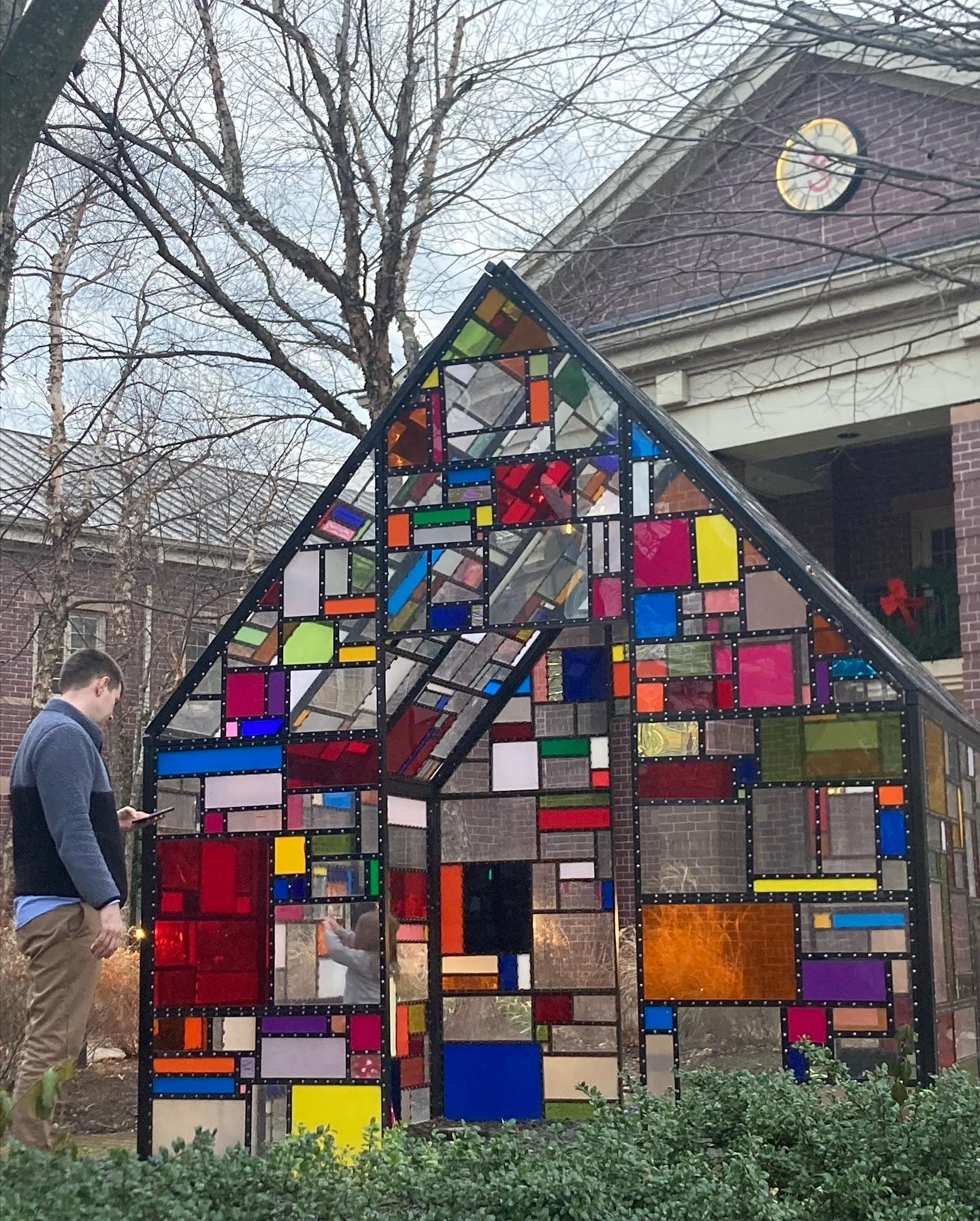 It was the perfect photo-op for public art—art that anybody, young and old, can interact with because of its open presence in its local environment.

But what spurred my interest in Summit Public Art and sent me to Summit in the first place was my correspondence with French-born painter Laurence de Valmy, whose work is displayed besides MONDO, a vertical shopping mall in the city’s downtown. De Valmy lived in nearby Basking Ridge with her family for a time, and met an advisor from Summit Public Art at a 2017 artist residency at Mana Contemporary in Jersey City.

“I had never done anything that was public art before,” de Valmy told me over the phone from her home in San Diego. “They wanted something that was both permanent and weather-resistant, so I had to be creative about how I was going to put the piece up.” De Valmy, who dedicated herself to a career as a professional artist in 2015, started out with painting photorealism, but quickly veered into a more abstract medium: Painting Instagram posts. 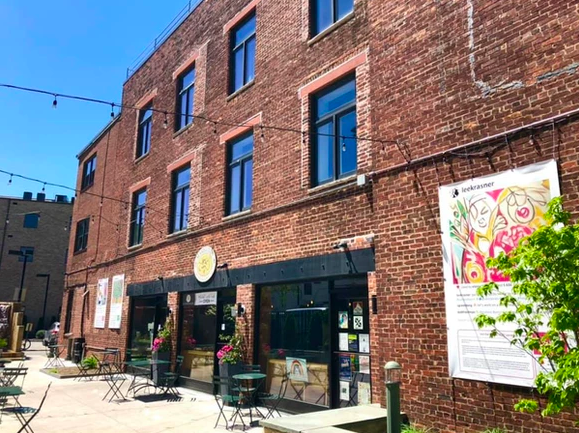 “My photorealist paintings didn’t represent everything I wanted to say, so I came up with this idea about using Instagram to educate people about art history and share stories,” she said. It was this “post painting” series she ended up displaying in Summit. Her Instagram post pieces are a simple but creative concept—she uses a mix of traditional and digital art to create fake Instagram photo posts by artists like Barbara Kruger, Edouard Manet, Andy Warhol, Hilma af Klint, and more.

To those resistant to social media’s power, it might seem like kitsch. But de Valmy’s project proves her ability to think outside of the box and use social media as not just a marketing tool for her own work but as a medium itself. “People always say ‘social media does this, social media does that,’ but it’s people themselves who do those things. It’s a tool, but at the end of the day it’s just people,” de Valmy said. “It speaks to the basic need to communicate, which humans have always had.” If you break down the term social media, the term itself implies a media you can interact with. And it’s undeniable that artists like Warhol and Basquiat, who loved experimenting with new forms of media, would have had some kind of presence on it.

“People always say ‘social media does this, social media does that,’ but it’s people themselves who do those things. It’s a tool, but at the end of the day it’s just people,” de Valmy said. “It speaks to the basic need to communicate, which humans have always had.”

In her posts, de Valmy imagines other artists and intellectuals of the time commenting on their contemporaries’ posts. In de Valmy’s depiction of Manet’s controversial 1865 nude painting Olympia on Instagram, contemporary art critic Theophile Gautier writes: “This is NOT modern art! Worthless!” As a fiction writer, I couldn’t help noticing the aspects of character building that went into her work. It was amusing to me that Vincent van Gogh’s imagined handle was just @vincent, not even using his last name, like his work and his persona, simple but iconic. “For artists like van Gogh, you have some letters and materials they wrote to read about their voice,” de Valmy said. She tries to stick to the facts in her pieces and draw on biographies to create a mix of humorous and serious imagined conversations between artists on social media. 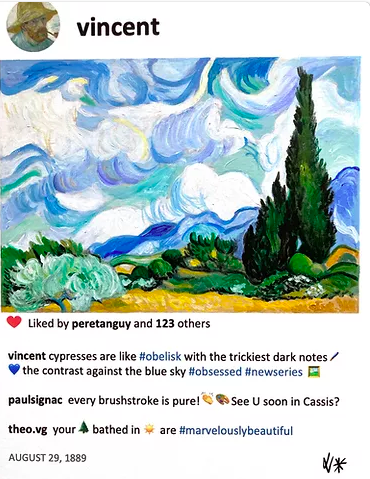 For her installation in Summit, she chose to display Lee Krasner, Keith Haring, and Jean-Michel Basquiat. “People feel they don’t know about art, and knowing the story behind art really changes the perception,” she said. On each piece on the wall behind MONDO, de Valmy added a QR code which links to a description of the people and relationships depicted in the work. “I chose Krasner, Haring, and Basquiat, because they’re all stories of resilience. I wanted to be inclusive of Krasner as a woman artist, Haring as a gay artist, and Basquiat as a Black artist,” she explained. “Also,” she added. “Haring and Basquiat were street artists, so it felt right to put them back in the street.” 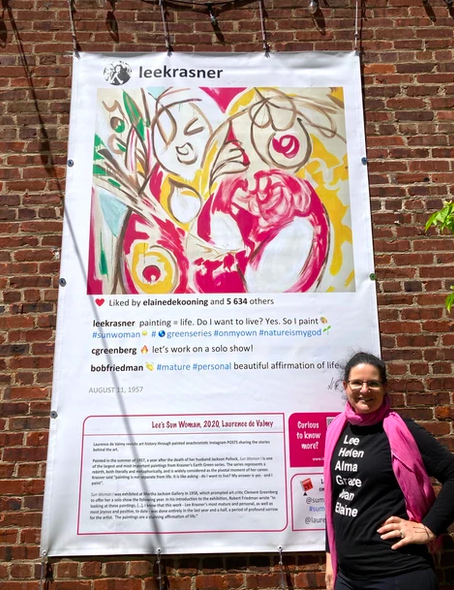 “I chose Krasner, Haring, and Basquiat, because they’re all stories of resilience. I wanted to be inclusive of Krasner as a woman artist, Haring as a gay artist, and Basquiat as a Black artist,” she explained. “Also,” she added. “Haring and Basquiat were street artists, so it felt right to put them back in the street.”

Ultimately, as de Valmy said, no work of public art is truly permanent. But work has no doubt educated many about famous artists as human beings as well as creators, and that education in her viewers’ minds will last long beyond the pieces themselves. And the relationship between the town of Summit, Summit Public Art, and the creatives’ whose work graces the town is a symbiotic and continuous one. “With Summit Public Art, it’s a mutual relationship, and they really make an effort to share the work I do,” de Valmy said.

The evening I spent in Summit felt magical, maybe because it was the winter solstice, maybe because the pandemic had weighed so heavy that for a few hours I was able to forget cynicism and let myself fall under the spell that art can cast. Laurence de Valmy’s work, including her post paintings, partnerships with Art Girl Rising, and her NFTs for sale is available on her website. Summit Public Art has ongoing installations year-round and offers maps of their installations in the town of Summit, forty easy minutes from New York on New Jersey Transit.